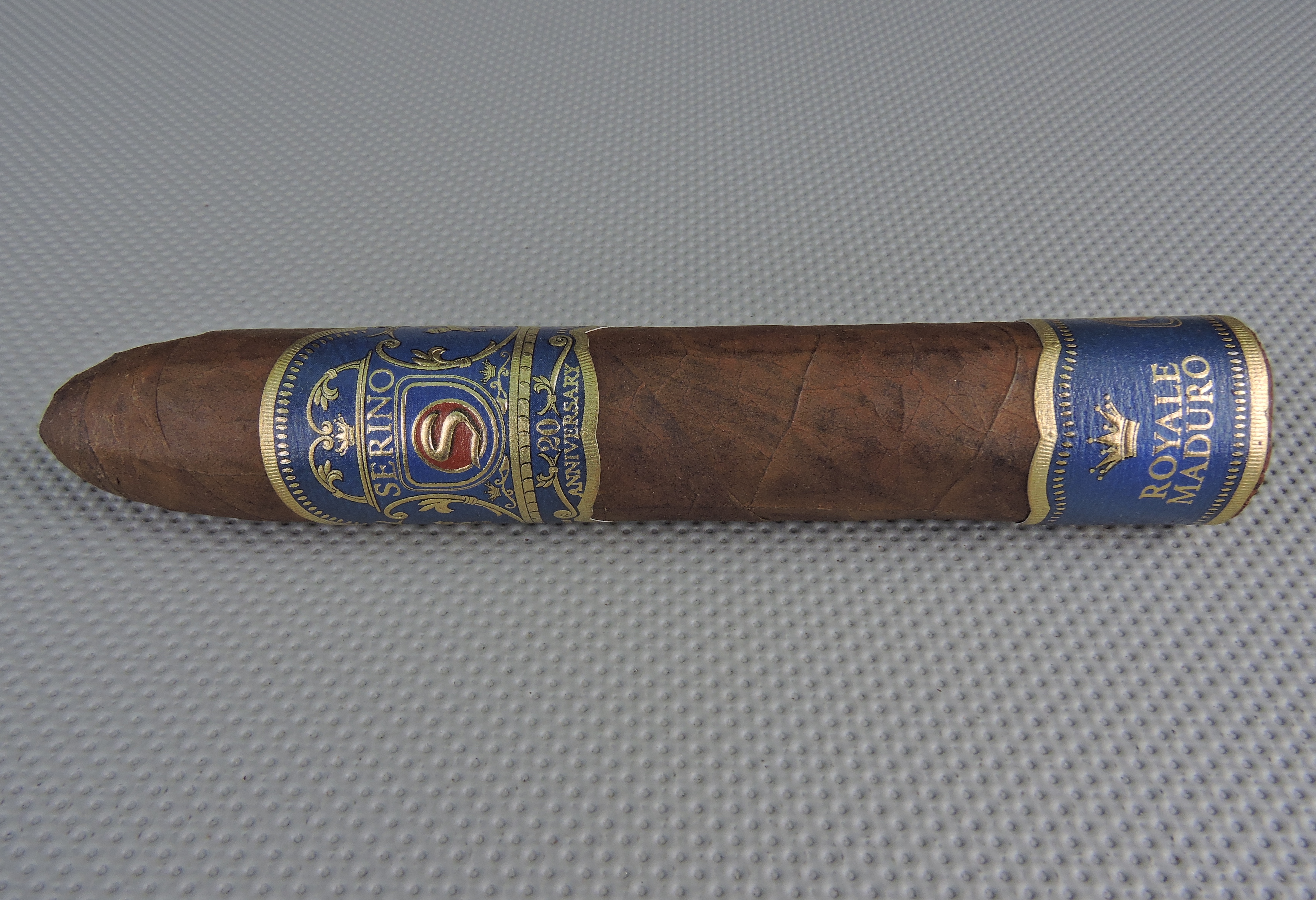 The Serino Royale Maduro is one of four blends launched by Serino Cigar Company. The company is run by Tony Serino who has 20 years experience in the cigar industry where he was involved in importing and selling bundle cigars. With the Serino Royale line, Serino and his company make the transition into super premium cigars. To produce his cigars, Serino has teamed up with Omar Gonzalez Aleman of La Corona Cigars S.A.. Gonzalez is the former head director of the La Corona Factory in Havana, maker of many well known Cuban brands such as Romeo y Julieta, Hoyo de Monterrey, Cuaba, Por Larranaga, Saint Luis Rey, San Cristobal de Habana and some Montecristos. To U.S. cigar enthusiast, recently Gonzalez is best known for his involvement of brands HR, Soneros, and Cubanacan. Today we take our first look at the Serino Royale line with the Serino Royale Maduro. Overall, this was quite an impressive cigar and makes Serino a company to keep an eye out for in 2016. 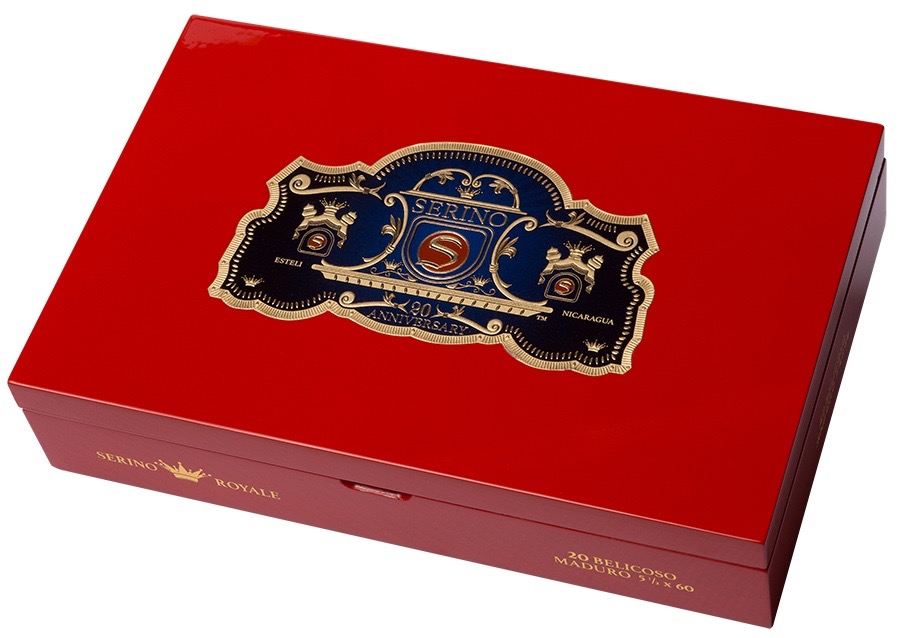 The blend to the Serino Royale Maduro uses a Habano 2000 seed Oscuro wrapper from Ecuador over Nicaraguan binder and filler.

There are four sizes in the Serino Royale Maduro. Each are packaged in 20 count boxes. 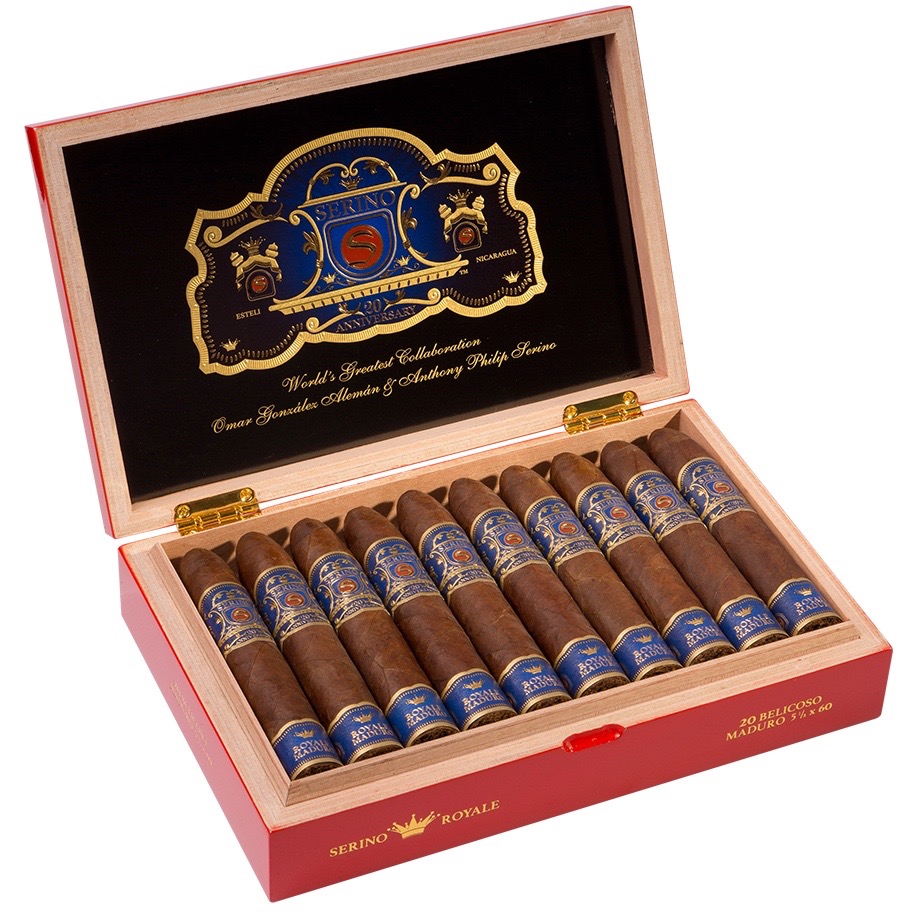 The Ecuadorian Habano Oscuro wrapper of the Serino Royale Maduro Belicoso has a coffee bean color with some darker marbling. Depending on how the light shines on it, the wrapper may give off a colorado red tint to it. There were some light oils present on the wrapper. While there were some visible wrapper seams and visible veins, I found the surface to the wrapper to be on the smooth side. The tip of the belicoso was on the shorter side.

There are two bands on the Serino Royale Maduro. The primary band is mostly blue with gold font. At the center of the band is a “S” on a red circle sitting on a blue shield. Above the shield is the text “SERINO”. To the left and right is a small version of the “S” logo on a red circle sitting on an inverted blue shield. The lower part of the band has the text “20th Anniversary” in gold font. The remainder of the band has several gold adornments. The band itself is finished in gold trim.

The secondary band is also blue in color with gold trim. The text “ROYALE MADURO” is at the center of the band in gold font. A gold crown sits above that text. To the left and right is a small version of the “S” logo on a red circle sitting on an inverted blue shield.

Prior to lighting the Serino Royale Maduro Belicoso, I went with a straight cut. Given this was a shorter belicoso tip, I still left some room for a tapering effect when I made the cut. Once the tip was removed, I commenced with the pre-light draw experience. The dry draw provided a mix of coffee, floral spice, and leather. Overall I considered the pre-light draw experience of the Serino Royale Maduro Belicoso to be satisfactory. At this point I removed the footer band, lit up my cigar and awaited what the smoking phase would have in store.

The start to the Serino Royale Maduro Belicoso picked up where the pre-light draw left off as I got more coffee and floral notes. In addition, I detected notes of white pepper. The floral notes quickly morphed into a citrus flavor. I found the coffee notes emerged as the primary flavor while the citrus and white pepper became background notes. Meanwhile on the retro-hale, I picked up an additional layer of white pepper.

Later in the first third, some cocoa notes surfaced. From time to time I found both the cocoa and citrus notes make their way into the forefront joining the coffee notes. Meanwhile, the white pepper notes remained in the background.

By the midway point of the Serino Royale Maduro Belicoso, I found the floral notes returned – along with some cedar notes. These notes joined the white pepper in the background. Meanwhile the coffee notes continued to be grounded in the forefront. The citrus and cocoa notes started to diminish.

The last third saw an increase in the cedar and pepper spices. I found these notes were now firmly in the forefront. The coffee and floral notes were in the background while the cocoa pretty much dissipated. This is the way the cigar experience of the Serino Royale Maduro Belicoso came to a close. The resulting nub was cool in temperature and firm to the touch.

For a larger ring gauge cigar, I found the Serino Royale Maduro Belicoso scored nicely when it came to burn and draw.I found the cigar maintained a straight burn path. While there were times the burn line was sharper than other times, i still found this cigar had relatively straight burn line. The resulting ash was not overly firm, but it wasn’t a loose, flakey one either. The ash itself had a salt and pepper complexion. The burn rate and burn temperature were both ideal. 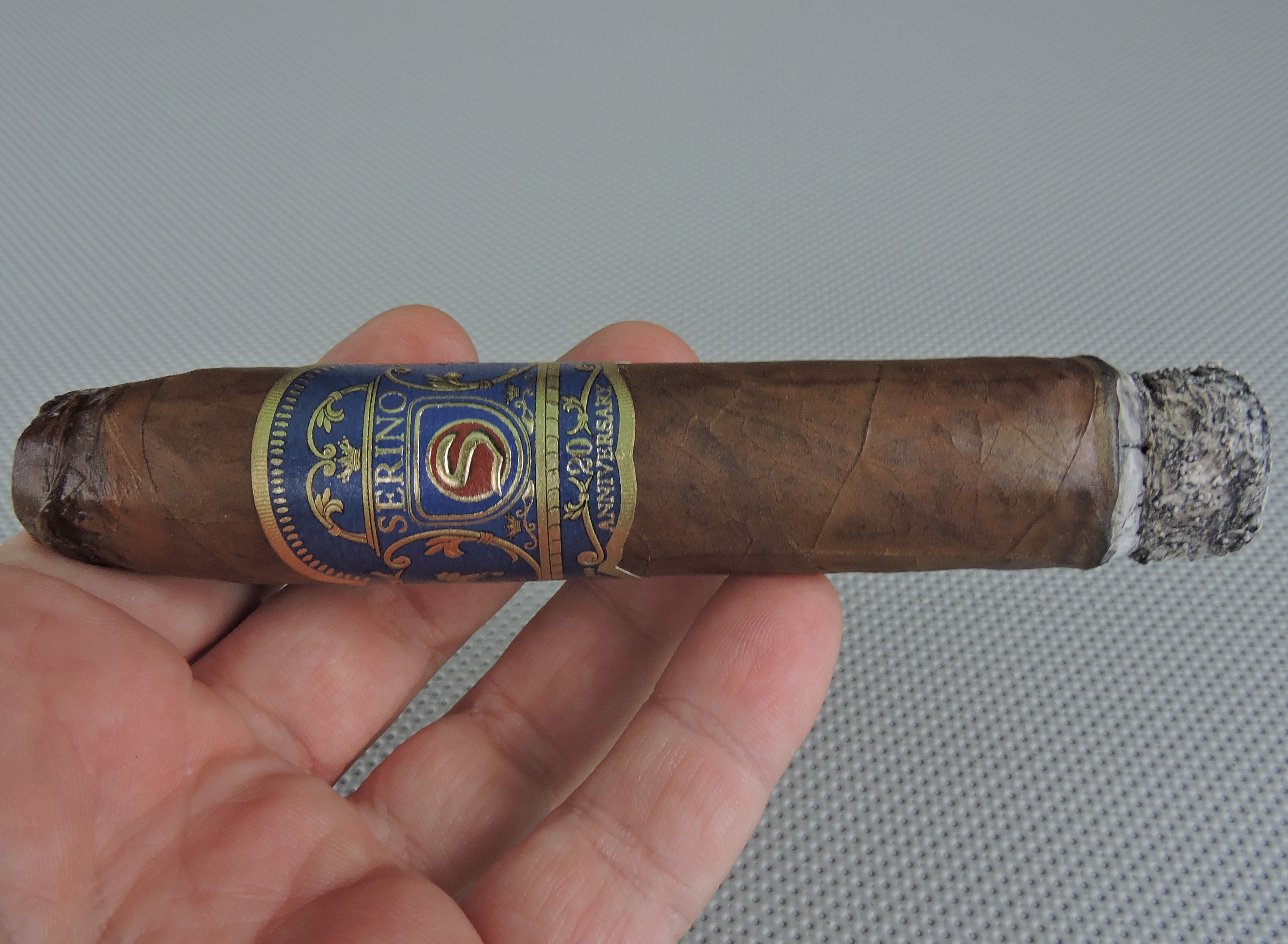 Burn of the Serino Royale Maduro

The draw to the Serino Royale Maduro Belicoso was excellent. It had a touch of resistance- which is something I like. I found the tapered head of this cigar made smoking it easy. This mitigated the effect of having a 60 ring gauge cigar in your mouth.

As mentioned, Serino Cigar Company positioned the Royale Maduro as its medium to full-bodied offering. I found this to be a pretty accurate assessment.  While I did find the Serino Royale Maduro Belicoso to start out medium-bodied, it progressed to medium to full by the second half.

Meanwhile strength-wise, the Serino Royale Maduro Belicoso started out with medium strength. By the last third, I saw a slight increase in strength and the cigar moved into medium to full territory. In terms of strength versus body, I gave a slight edge to the body.

Very simply, I was quite impressed with the Serino Maduro Royale. In particular, I found this cigar performed quite well in the 5 1/2 x 60 Belicoso. While the tapered tip of the Belicoso mitigated the less than comfortable feeling of puffing on a large ring gauge cigar, I found this was a blend that worked quite well in the 60 ring gauge format.  This is a cigar that smoked terrific now, but my gut tells me that this is going to be one of those cigars that has some great long-term aging potential. Overall the Serino Maduro Royale Belicoso is a cigar I could recommend to an experienced cigar enthusiast. It is also a great cigar for a novice to “graduate” to something in the medium plus range. As for myself, it’s a cigar I would reach for and smoke again. It’s certainly worthy of a box split.