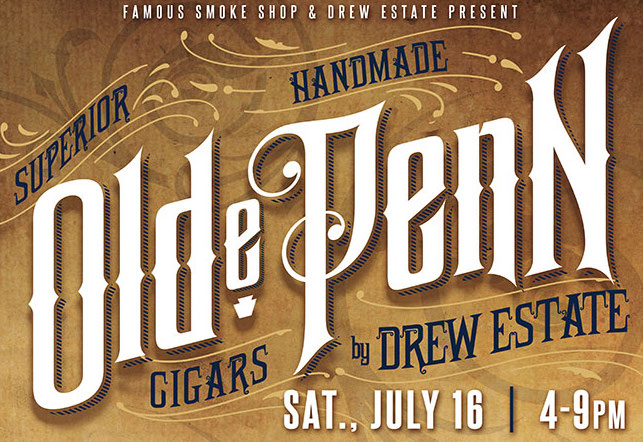 Drew Estate has become the latest company to create a shop exclusive for Famous Smoke Shop. Today the Easton, Pennsylvania based company announced that it will be receiving Olde Penn Cigars.  Olde Penn Cigars is a new premium offering made at Drew Estate’s La Gran Fabrica.  The new line will make its debut at a launch party on July 16 at Leaf Restaurant & Cigar Lounge located in Easton.

The Olde Penn line reflects the “old school attitude” found in the State of Pennsylvania. In a press release, Famous Smoke Shop explained:

Life in Olde Penn was anything but pedestrian. Its people worked hard, played fair and stood up for what they believed in. When they met adversity face-to-face, they gave it a wry look and spit in its eye. Pennsylvanians business was building America. They followed their fathers into the coal mines, forged America’s railways in their steel mills, tamed the Great Lakes, and 4,600 cigar factories (more than any other state in the Union), plus myriad Keystone State tobacco farms, satisfied the nation’s appetite for a good smoke.

Suffice it to say, Pennsylvania’s roots run deep, hold fast, and remain strong. And it’s in this unanimous, spirited and determined tradition that Olde Penn cigars were forged with the same grit and determination that’s been coursing through Pennsylvanians veins since 1682.

The Olde Penn is described as mild to medium profile. The blend features a Connecticut-seed wrapper grown in Ecuador over Nicaraguan fillers. It will be available in five sizes (Small Corona, Robusto, Lonsdale, Toro, Gordito). It will be packaged in 20 count boxes with pricing between $6.00 and $7.50.

At a glance, here is a look at the Olde Penn line: