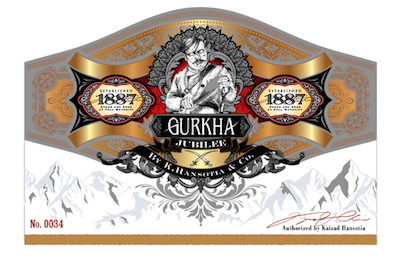 At the 2016 IPCPR Trade Show, Gurkha will unveil a new release called Gurka Jubilee. This release will packaged in a special 10 count limited edition humidor.

Gurkha Jubilee will be released in one size – a 6 x 58 Toro featuring an aged Ecuadorian Habano wrapper over Nicaraguan binder and filler. Pricing will be $20.00 per cigar.

Gurkha and its CEO, Kaizad Hainsotia are known for its elaborate packaging.  Details of the humidor have not been disclosed, but it is expected to be showcased at the 2016 IPCPR Trade Show opening July 24.

At a glance, here is a look at the Gurkha Jubilee: