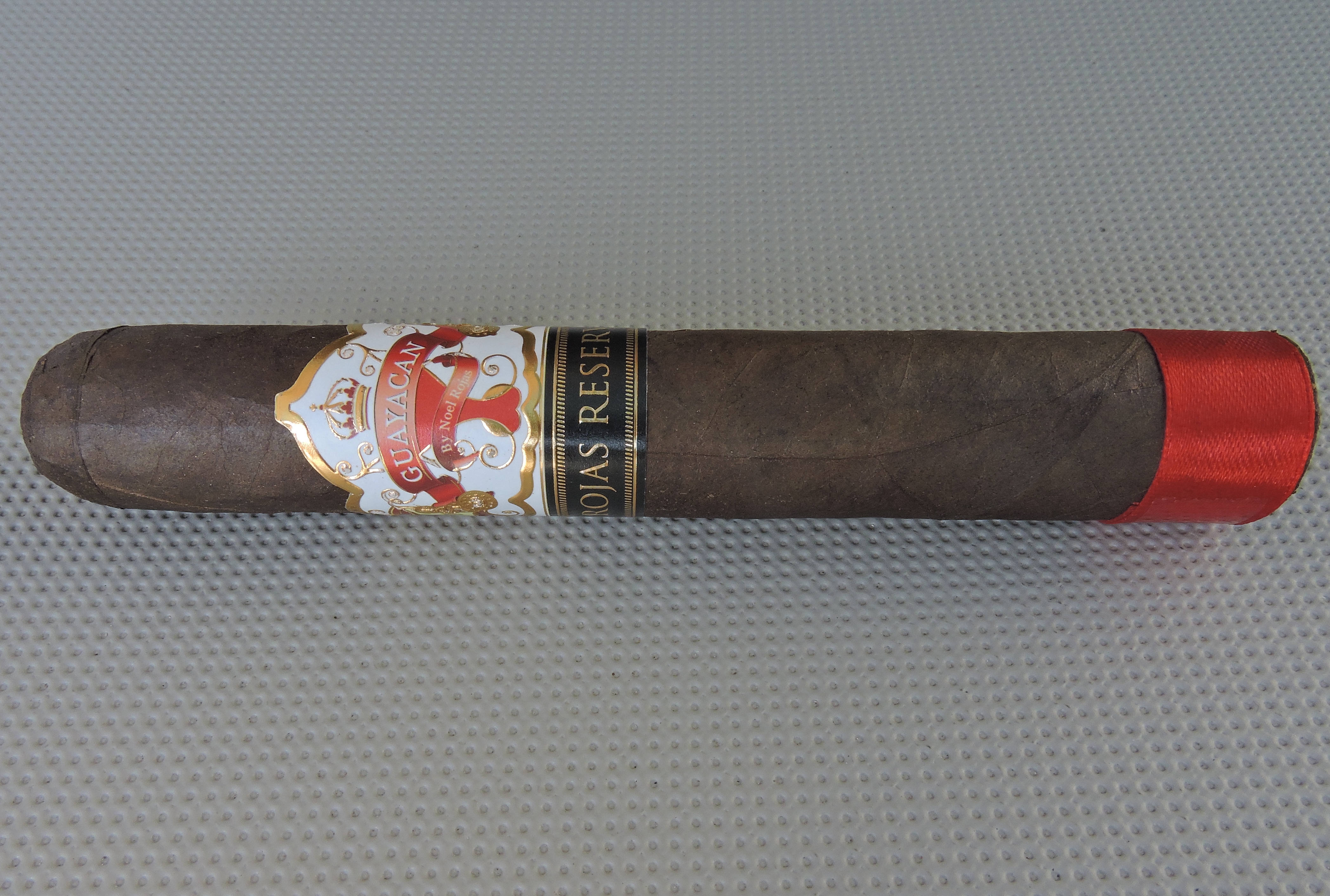 The Guayacan Rojas Reserve is a line that was introduced at the 2015 IPCPR Trade Show. The Rojas Reserve gets its name from Noel Rojas, who is the owner of Guayacan Cigars and the man behind the blend. The Rojas Reserve became the fifth blend to be released by Guayacan. What is different about this cigar is that it is the Guayacan’s first Nicaraguan puro. Priced under $7.00, it is also positioned as a value-priced line. Rojas Reserve has initially been released in two larger ring gauge sizes – a Gordo (6 x 60) and a Super Gordo (6 x 70). Recently I’ve had an opportunity to smoke the Rojas Reserve in the Gordo format. Overall I found a very enjoyable cigar that does very well in the 60 ring gauge format.

Over the past year, Guayacan has undergone several changes as a company. Last Fall, Rojas announced he was ending his agreement for House of Emilio (now Boutiques Unified) to handle Guayacan’s distribution. Rojas is not only a brand owner, but a factory owner. Last year, Rojas switched to a new factory, teaming up with Brandon Hayes of Renegade Cigars to open Tabacalera New Order of the Ages (Tabacalera NOA). The Guayacan brand blends, including the Rojas Reserve are now produced at the new factory. Rojas also owns farms in Nicaragua and these tobaccos are incorporated into the Rojas Reserve blend.

Without further ado, let’s break down the Rojas Reserve Gordo and see what this cigar brings to the table.

The Rojas Reserve features a Nicaraguan Broadleaf Maduro over a blend that includes both Nicaraguan Corojo and Nicaraguan Criollo.

At press time, there are currently two offerings in Guayacan Rojas Reserve line. Both sizes are sold in 20 count boxes.

The maduro wrapper of the Guayacan Rojas Reserve Gordo has a rich dark chocolate color it it. The wrapper also had a light coating of oil on it. Overall I found this to be quite a smooth wrapper with very few visible veins. There are some visible wrapper seams, but this doesn’t take away from the smooth look of this maduro.

The band to the Rojas Reserve is a variation of the original Guayacan (Habano) band. The Rojas Reserve has a white, red, and gold colored band. The band has a white background with gold trim. On the center of the band is a light-colored red ribbon design with the text “GUAYACAN” in white font. A little further down on the band is a smaller slightly darker red ribbon design with the text “BY NOEL ROJAS” – also in white font. Above the ribbon design is a gold crown. The rest of the band has various gold and red adornments on the sides of the band.

The lower part of the Rojas Reserve band is a simulated secondary band. This section is black with gold trim. Prominently on the center of that section is the text “ROJAS RESERVE”.

There is also a red ribbon around the footer.

I opted to go with a straight cut to remove the cap of the Rojas Reserve Gordo. Once the cap  was successfully removed, I moved on to the pre-light draw phase. The dry draw of the cigar delivered a mix of leather and chocolate. I also picked up a slight cedar and a slight citrus note. Overall I considered the pre-light draw to be satisfactory. At this point, I removed the footer ribbon from the Rojas Reserve, lit up the footer and awaited what the smoking phase would have in store.

The Rojas Reserve Gordo started out with short, moderate burst of blast pepper. The pepper quickly receded into the background, but remained present on the retro-hale throughout the smoking experience. Notes of chocolate and earth soon surfaced as the primary notes. Meanwhile a citrus note also joined the pepper in the background.

Throughout the first half, the chocolate and earth notes alternated as to what was the primary note. Once the Rojas Reserve Gordo reached the midway point, I found the earth notes became primary with the citrus, chocolate and black pepper notes secondary. It was also at this point, where I detected some cedar notes in the background.

In the later stages of the second third, the pepper and cedar notes started to increase and by the last third, the spices became the primary note. This is the way the cigar experience of the Rojas Reserve Gordo came to a close. There was a slight bit of harshness at the very end, but by this point it was time to put down the cigar. The resulting nub was excellent – firm to the touch and cool in temperature.

When it comes to burn and draw, the Rojas Reserve Gordo performed very well. In fact, for a big ring gauge, you might be surprised. I found the burn path and burn line to be relatively straight from start to finish. This is not a cigar that required excessive touch-ups. The resulting ash was a medium gray color. While this wasn’t an overly firm, it wasn’t a flakey ash either. The burn rate and burn temperature performed ideal 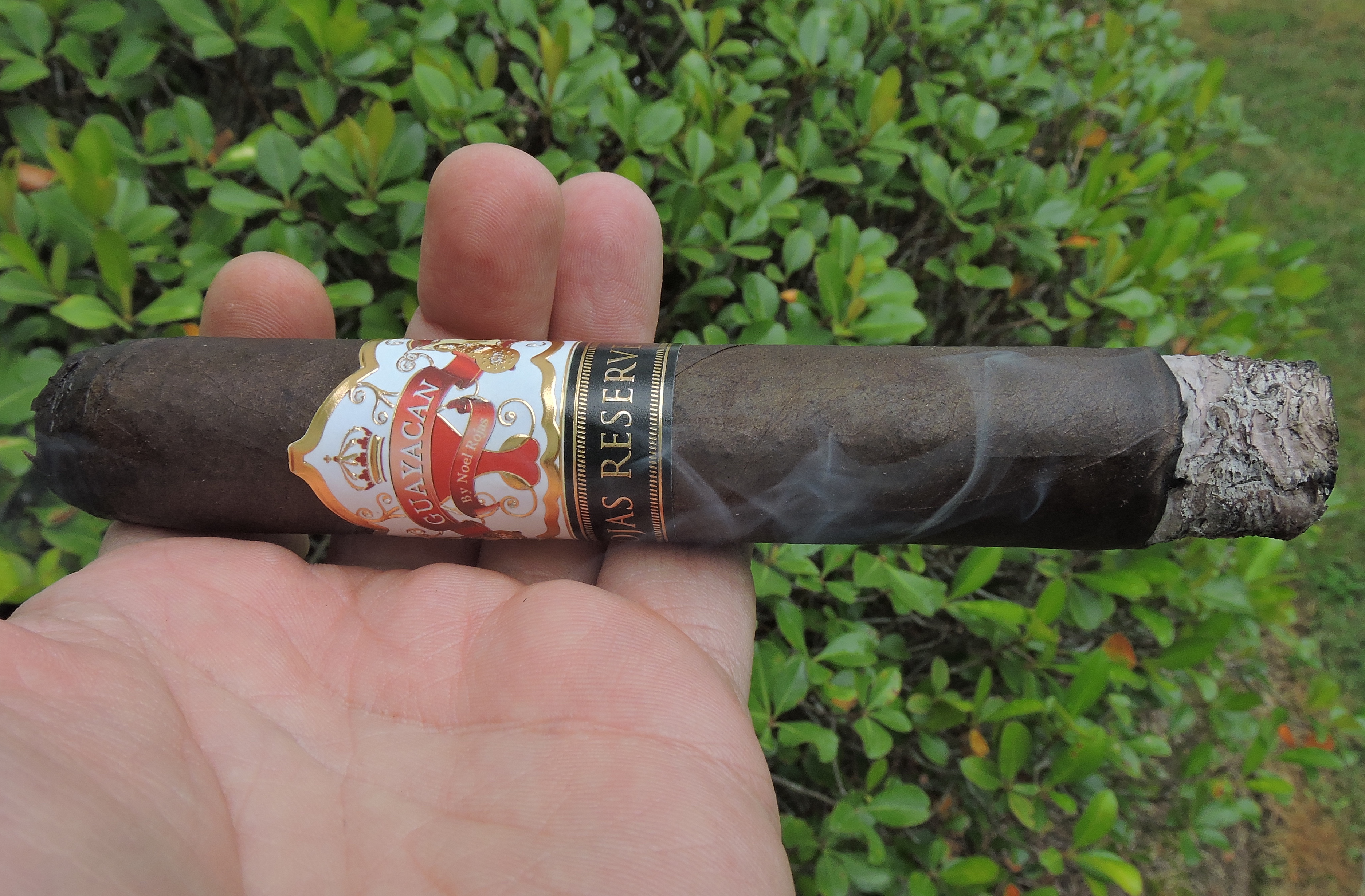 The draw was open, but not loose. I did find this cigar produced an ample amount of smoke.

While the dark color and large size of this cigar may give the perception this is a powerful cigar – this is actually not the case. From a strength perspective, I found the Rojas Reserve Gordo to be medium strength from start to finish. In terms of body, the Rojas Reserve started out on the upper end of medium. By the last third, I found the body of this cigar to be medium to full (especially when you factor in the retro-hale). As for strength versus body, I gave a slight edge to the body.

I’ve long said, there is nothing wrong with a 60 / 60 plus ring gauge cigar if it is blended to the size (which really is a rule of thumb for any cigar). In the case of the Rojas Reserve Gordo, this was exactly the case. I found this cigar to deliver some very nice flavors and produce just enough complexity. At $6.25 this is also a cigar that has some very nice value.

Overall it’s a cigar I could recommend to an experienced enthusiast. This is also a nice cigar for the novice looking to “graduate” to something medium / medium plus. If you are open to smoking a large ring gauge, you might be pleasantly surprised. As for myself, this is a cigar I would smoke again. It’s certainly worthy of a box split.