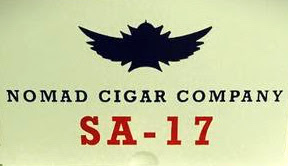 Turns out there is a fifth size in Nomad Cigar Company’s SA-17 line.

“The lancero was actually rolled at the same time as the other sizes. With limited release, it was kind of kept under wraps. Most people didn’t really know the size existed…and I was not quick to mention it with all the noise of other new releases earlier in the year. We are now making it available to all Nomad retailers” – said Nomad Cigar Company owner Fred Rewey.

While not explicitly stated, the approach Nomad has taken with the Nomad SA-17 Lancero appears to be one many manufacturers have been taking in response to the recently implemented regulations by the U.S. Food and Drug Administration (FDA). This approach involves releasing on a limited basis some products with little to no marketing prior to the August 8th, 2016 date – only later to formally announce and place into wider distribution.. Cigars released after the August 8th date must obtain FDA approval prior to going on the market.

The Nomad SA-17 Lancero is packaged in 21 count boxes. Pricing is set at $9.75.  Nomad Cigar Company is distributed by Boutiques Unified.