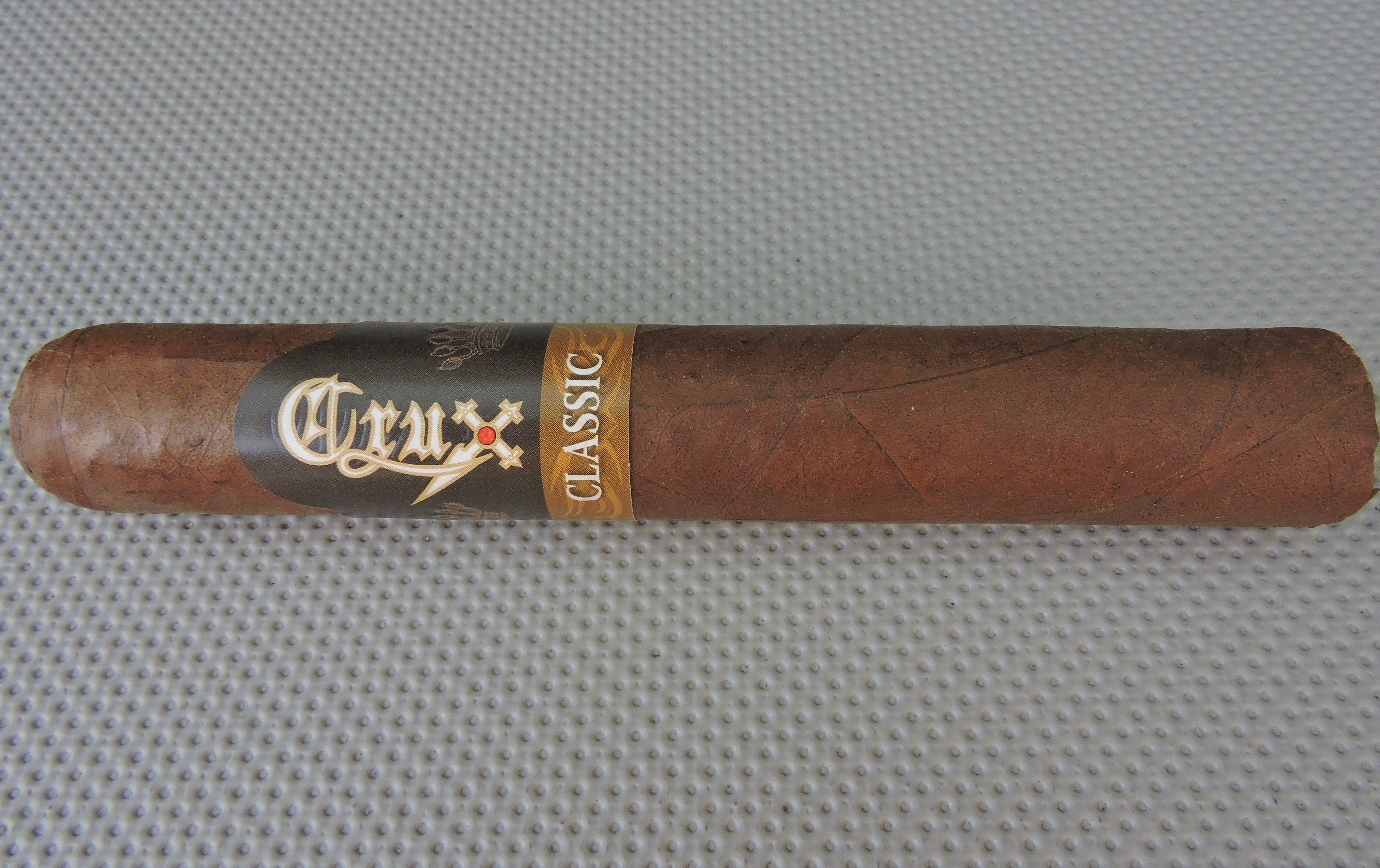 The Crux Classic is one of nine regular production lines by Crux Cigar Company. When Crux Cigars launched in 2014, the company initially released three lines (Ninfamaniac, Ninfamaniac Dark, and Skeeterz) all with ring gauges 33 and under. While this seemed like an unorthodox approach, it also allowed the company to enter the market with some differentiating offerings. Later that year, three additional lines would follow that would have a focus on more-traditional vitola offerings. One of those new lines was the Crux Classic. Crux Classic serves the purpose of delivering a cigar for the everyday cigar enthusiast. Recently I’ve had an opportunity to smoke the Crux Classic in the Robusto size. One impressive thing about Crux is how they have been able to build a deep portfolio without a heavy emphasis on limited editions. Overall, I found that not only does the Crux Classic Robusto fulfill the mission of an everyday smoke, but it succeeds at delivering an enjoyable high quality product.

Crux Cigar Company, it was founded by Jeff Haugen and Joel Rogers, the owners of Tobacco Grove in Maple Grove Minnesota. The duo has looked to build on their experience on the retail end as they enter the world of manufacturers. As mentioned the company currently has ten regular production lines, plus one limited edition line (Crux Limitada).

Without further ado, let’s take a closer look at the Crux Classic Robusto and see what this cigar brings to the table.

The Crux Classic is a Nicaraguan puro. The cigar is made at Crux Cigars’ manufacturing partner, the Placencia factory in Esteli, Nicaragua.

Crux Classic is now available in five sizes. This year the addition of the Corona Gorda and Gordo brought the total number of vitolas in the line up to five.

The Crux Classic incorporates some of the unique packaging that has been seen across many of its other lines. The Classic comes packaged in 20 count boxes, but those 20 count boxes consist of four five packs. This gives retailers the option to sell by the box, by five packs, or individually. 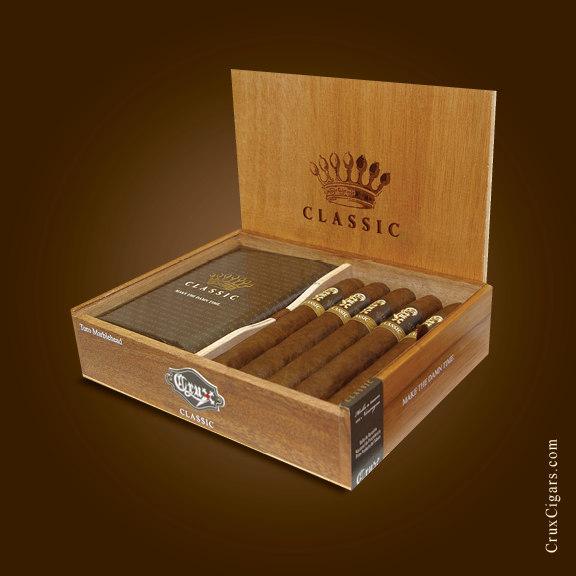 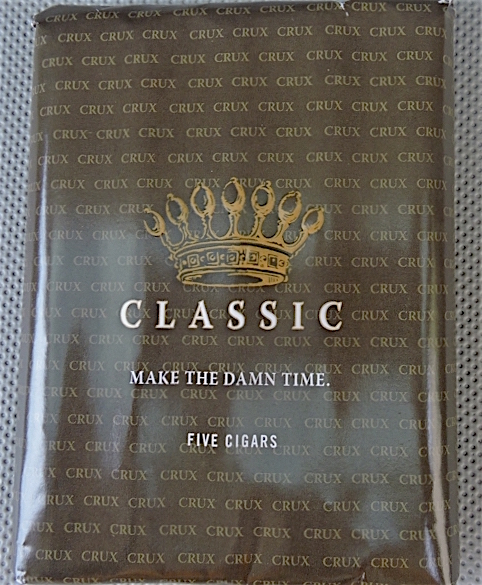 Prior to lighting the Crux Classic Robusto, I went with my usual choice of a straight cut to remove the cap. Once the cap was successfully removed, I moved on to the pre-light draw phase. The cold draw was simple, yet flavorful as I detected notes of chocolate and earth along with a touch of cedar. Overall, I considered this to be an excellent pre-light draw. At this point I was ready to light up the Crux Classic Robusto and see what the smoking phase would have in store.

During the first third, the cocoa notes became richer and had an inherent, but not overpowering sweetness. The earth notes moved into the background with the cedar and pepper notes. The salty component in the background diminished during this stage. Meanwhile the white pepper started to linger a bit on the tongue.

As the Crux Classic Robusto moved through the second third, the chocolate notes continued to be in the forefront and now had a creamy texture to them. The pepper, cedar, and earth notes remained in the background. The slight salty component that was present early on was no longer present.

By the last third, the pepper notes increased. Toward the end of the cigar, the pepper joined the chocolate notes int the forefront. The creamy texture of the chocolate notes was no longer present. There also was still a touch of cedar and earth. This is the way the cigar experience of the Crux Classic Robusto came to a close. The resulting nub was firm to the touch and cool in temperature.

Overall I found the burn of the Crux Classic Robusto to be low maintenance and one that did not require frequent touch-ups. The burn path had no problem staying straight. At times there was a slight curvature to the burn line, but it didn’t warrant any additional touch-ups. The resulting ash had a salt and pepper color. This was not an overly firm ash, but it was not a loose flaky ash either. The burn temperature was ideal. The burn rate was slightly fast, but this only reduced the smoking time (to about 45 minutes, which I considered a little fast for a 5 x 50) and did not have any adverse effects. 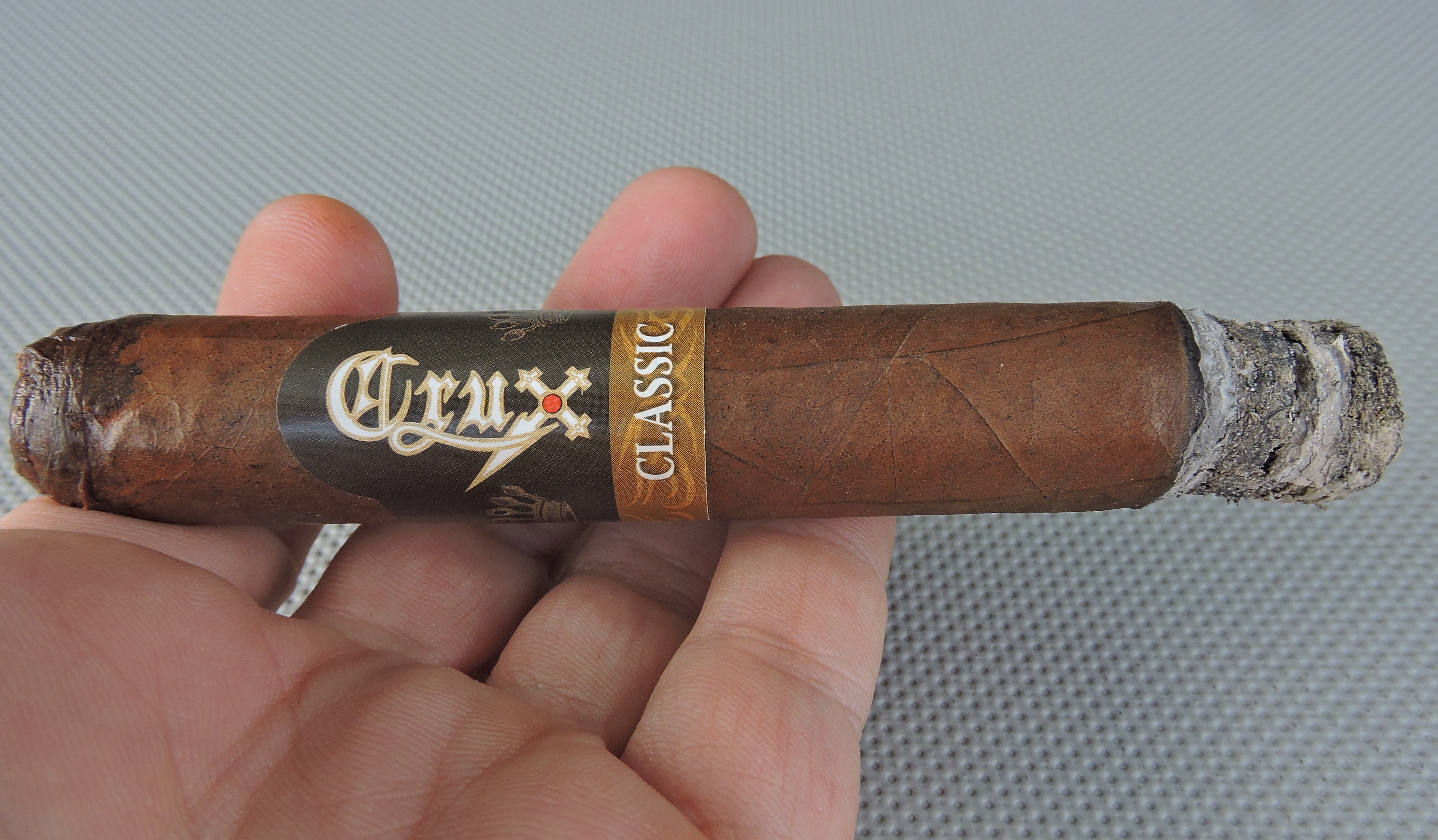 Burn of the Crux Classic Robusto

The draw to the Crux Classic Robusto had a touch of resistance to it – something that I enjoy. There also was a nice amount of smoke production to this cigar.

From a strength perspective, I assessed the Crux Classic Robusto as a classic medium -falling right in the middle of the spectrum. I didn’t find much variance in the strength level from start to finish. As for the body, the cigar started out medium to full. There was a gradual increase in body along the way, but in the end, this was a cigar that didn’t quite cross the threshold into full-bodied territory.

Overall the Crux Classic Robusto delivers an excellent smoking experience. It excels in the most important category – flavor. This is not a cigar that is going to undergo radical flavor transitions. Instead it is a cigar that has a lot of flavor nuances. Like most cigars, I found this cigar could be better appreciated when smoking it in a quiet, undistracted setting as one will pick up more of these nuances. This is a cigar that I would recommend to an experienced cigar enthusiast. While it has a little more body than I would normally give a novice, I would not discourage one from trying. It’s also a great cigar for a novice to progress to something on the medium plus side. As for myself, this is a cigar I would easily smoke again – and it’s worthy of a box purchase.