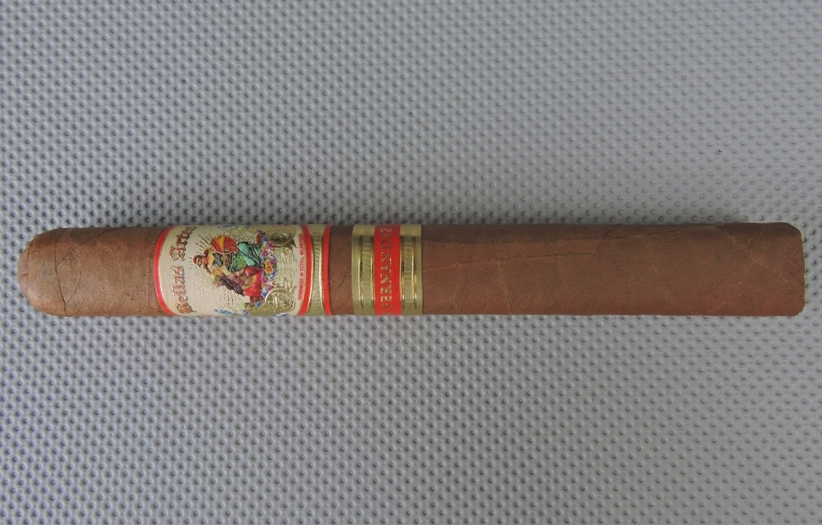 Just prior to the 2016 IPCPR Trade Show, A.J. Fernandez Cigars unveiled its latest release, a new blend called Bellas Artes. The past two years has seen A.J. Fernandez Cigars establish three highly successful regular production lines – New World, New World Connecticut, and Enclave. The common denominator of  each of these three lines is that they provided a high quality cigar around the $6.00 price point. The Bellas Artes is going to come in at a slightly higher price point, but as we will see, its going to be doing some unique things from a tobacco standpoint. Recently I’ve had an opportunity to smoke the A.J. Bellas Artes in the Short Churchill size. Overall, I found this cigar to be a solid addition into the A.J. Fernandez Cigars’ portfolio.

The past twelve months have been a very busy month for company owner A.J. Fernandez. Late last year, Fernandez split from his longtime business partner Kris Kachaturian. Fernandez then established a new U.S. distribution center and brought in longtime production manager at Tabacalera Fernandez, Ricky Somoza to oversee the operation. Meanwhile, Fernandez has been involved with blending several high profile blending efforts including with General Cigar (Foundry, Hoyo de Monterrey); La Palina Cigars; Foundation Cigar Company, La Gran Llave, and Southern Draw Cigars. Meanwhile he has been involved with not only launching Bellas Artes and Last Call for his own company, but several other lines which will be rolled out in the upcoming months.

As for the name “Bellas Artes”, it translates to Fine Arts, which as we will see is a very appropriate name for this cigar.

Without further ado, let’s take a look at the Bellas Artes Short Churchill and see what this cigar brings to the table:

The blend of the Bellas Artes is the big story around this cigar. It uses a proprietary wrapper known as Rojita. This wrapper is a hybrid that crosses three types of tobacco: U.S. Connecticut Shade, Corojo 99 and Havana 2000. The binder comes from a region of Nicaragua known as Quilali – located northeast of Esteli. Meanwhile the filler consists of tobaccos from three countries.

Bellas Artes is available in four box-pressed sizes. Each are packaged in 20 count boxes.

The Rojita wrapper of the Bellas Artes Short Churchill had a medium brown color with a slight cinnamon / rosado tint to it. There was a slight amount of oil on the wrapper. The wrapper itself was smooth was some visible veins, and most of the wrapper seams well hidden. The box-press is Cuban style with a slight rounded effect.

There are two bands on the Bellas Artes. The primary band has a peach background with red and gold trim around it. On the center of the band is a spiritual / renaissance style portrait painting on the center of it. Below the portrait are a series of gold medallions as well as the Nicaraguan and Cuban flags. Above the portrait is the text “Bellas Artes” in a classic English style font with gold trim. The back of the band has A.J. Fernandez’s signature.

The secondary band has a thick red stripe with thick gold trim across the top and bottom. On the center of the band is the text “A.J. FERNANDEZ” in large gold font.

The Bellas Artes Short Churchill started out with a mix of natural tobacco and cedar. In the background I detected some citrus sweetness along with some black pepper. The black pepper was also present on the retro-hale. During the early stages of the first third, the cedar emerged as the primary note. The natural tobacco was a close secondary note and developed a slight caramel quality to it. Meanwhile the citrus and pepper notes were more distant.

Later in the first third the natural tobacco (with the caramel component) eclipsed the cedar as the primary note. The cedar was now a close secondary note with the pepper and citrus more distant notes.

As the Bellas Artes Short Churchill moved into through the second third, the natural tobacco remained the primary note, but it slowly shed its caramel qualities. The cedar remained a close secondary note, but now some of the classic wood notes began to emerge. Meanwhile there still were some pepper and citrus notes in the more distant background.

By the last third, the wood and cedar notes once again emerged in the forefront. The natural tobacco was now a close secondary note. Much of the sweetness present from the cedar, natural tobacco, and citrus was now practically gone. There was a slight increase in the pepper, but it never got overwhelming. This is the way the flavor profile came to a close. The resulting nub was firm to the touch and cool in temperature. 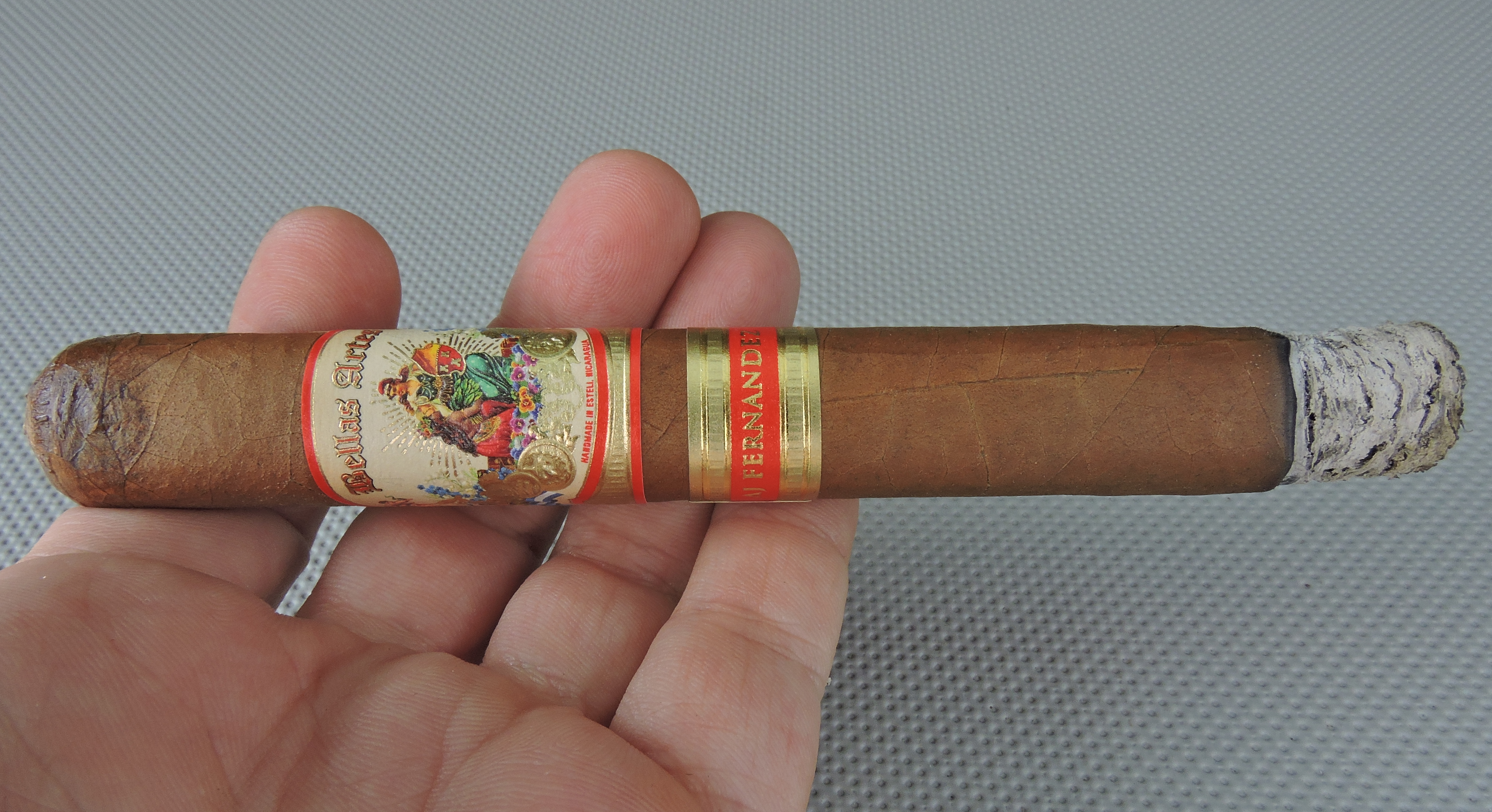 As for the draw, I found it smoked quite well. This was an open draw, but not a loose one. This was a low maintenance cigar to puff on.

In terms of strength and body, I didn’t find the Bellas Artes Short Churchill was a cigar where either attribute had large amount of variance during the length of the smoking experience. The strength of this cigar pretty much remained medium from start to finish. At the same time, the body of this cigar was medium to full. When it came to strength versus  body, the body maintained the edge.

As mentioned up-front, the name “Bellas Artes” translates to “Fine Arts”. I found this name to be appropriate as this was definitely a more refined cigar than some of the other recent releases by A.J. Fernandez. My initial experience with the “Bellas Artes” was around the Robusto sizes, and found it more average than anything. Once I moved over to the Short Churchill size, I found that to be a superior size in the blend – delivering a much better overall smoking experience. One thing about the Short Churchill, my gut tells me that this cigar definitely has some serious positive aging potential.

Overall this is definitely a cigar I’d recommend to an experienced cigar enthusiast. I also found this is an excellent cigar for a novice to move to something medium / medium plus. As for myself, this is a cigar I’d smoke again – and it’s worthy of a box split.