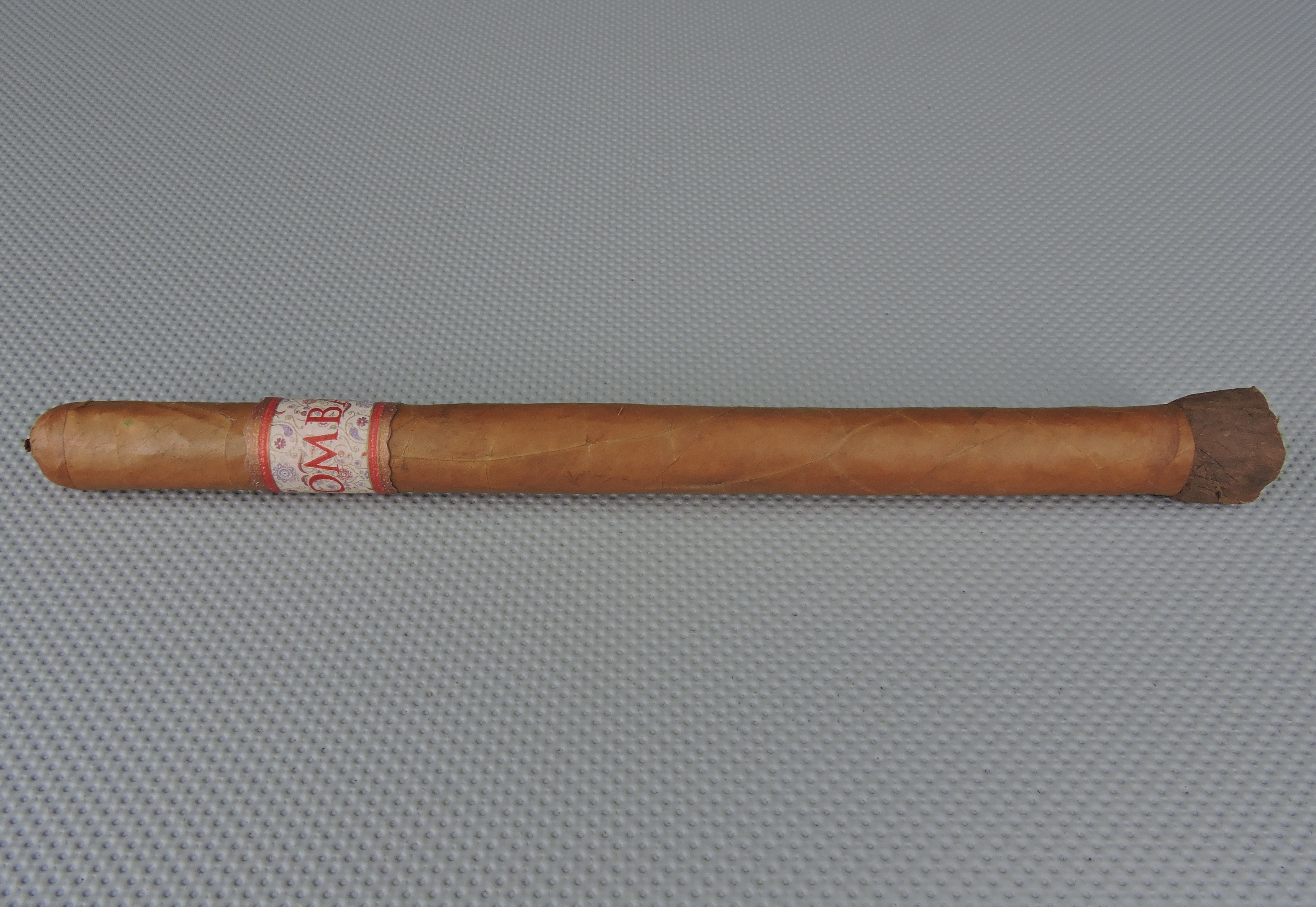 The Vintage Reserve Series made its debut late in 2015 with the MBombay KeSara Vintage Reserve Nikka. The Nikka is a cigar based on the popular MBombay KeSara blend, but includes tobaccos aged an additional three years. The Vintage Reserve Lancero 1973 is a different blend, and does feature even older tobaccos than the Nikka. Shah was a guest on Episode 201 of Stogie Geeks and discussed details of the blend. Most notably, this wasn’t a project that was planned around the aged tobaccos, but its a blend that was worked on where the aged tobaccos were a good fit.

We have the details around the project in our interview with Shah.

With our further ado, let’s break down the MBombay Vintage Reserve Lancero 1973 and see what this cigar brings to the table.

The specifics on which tobacco is actually the vintage tobacco has not been disclosed. There are two staples in the Bombay Tobak that are used in this blend. The first is the use of Peruvian tobacco – something found in each Bombay Tobak blend. The second is the Ecuadorian DesFlorado wrapper – a wrapper used on several (but not all) Bombay Tobak lines. A  DesFlorado wrapper uses a technique that involves removing the tobacco flower from the plant. This results in more nutrients being passing to the leaves; which in turn results in more flavor. 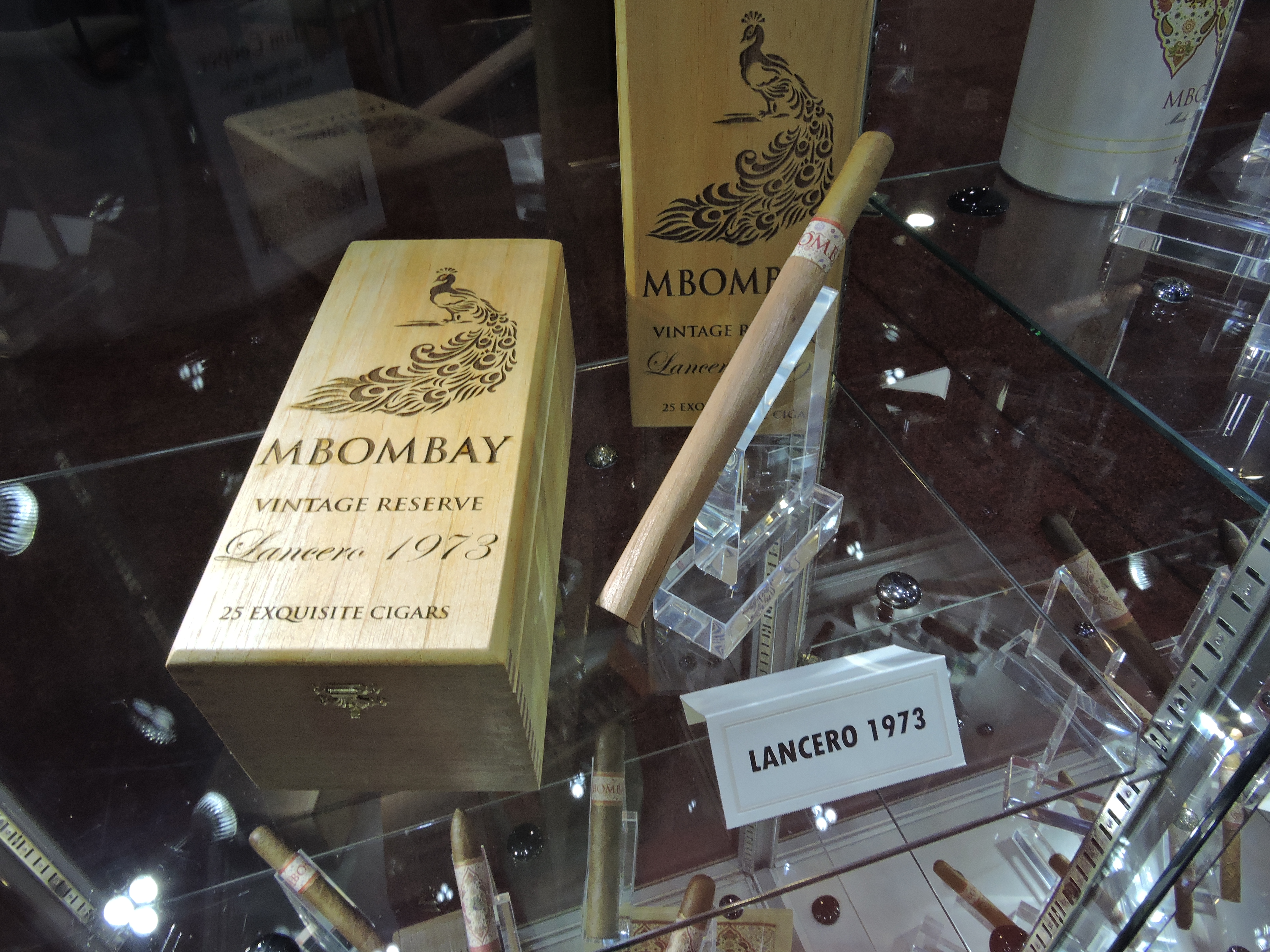 The Ecuadorian DesFlorado wrapper has that near butterscotch color that has been seen on several of the other MBombay releases. The surface of the wrapper is smooth with a light coating of oil on it. There are also some thin visible wrapper seams, but most of the wrapper seams are well hidden. The cap has a short pig-tail affixed to it. Finally, there is a brushed footer that consists of about 1/2″ exposed binder. The brushed footer is also something that has been seen on other MBombay 8 1/2″ lanceros.

The band features a rose, red, and gold Indian-inspired mosaic design. There is red and gold trim across the top and bottom of the band.  Prominently displayed on the band is the text “MBOMBAY” in large red font.

A cedar sleeve covers the Vintage Reserve Lancero 1973 from the footer up to the band. I personally liked this because it does protect the brushed footer as well as allows for some of the cedar to be absorbed into the cigar. Because Vintage Reserve Lancero 1973 has a brushed footer, when the cedar sleeve is wrapped around the cigar, it almost makes the cigar look like a long pyramid-shaped vitola. 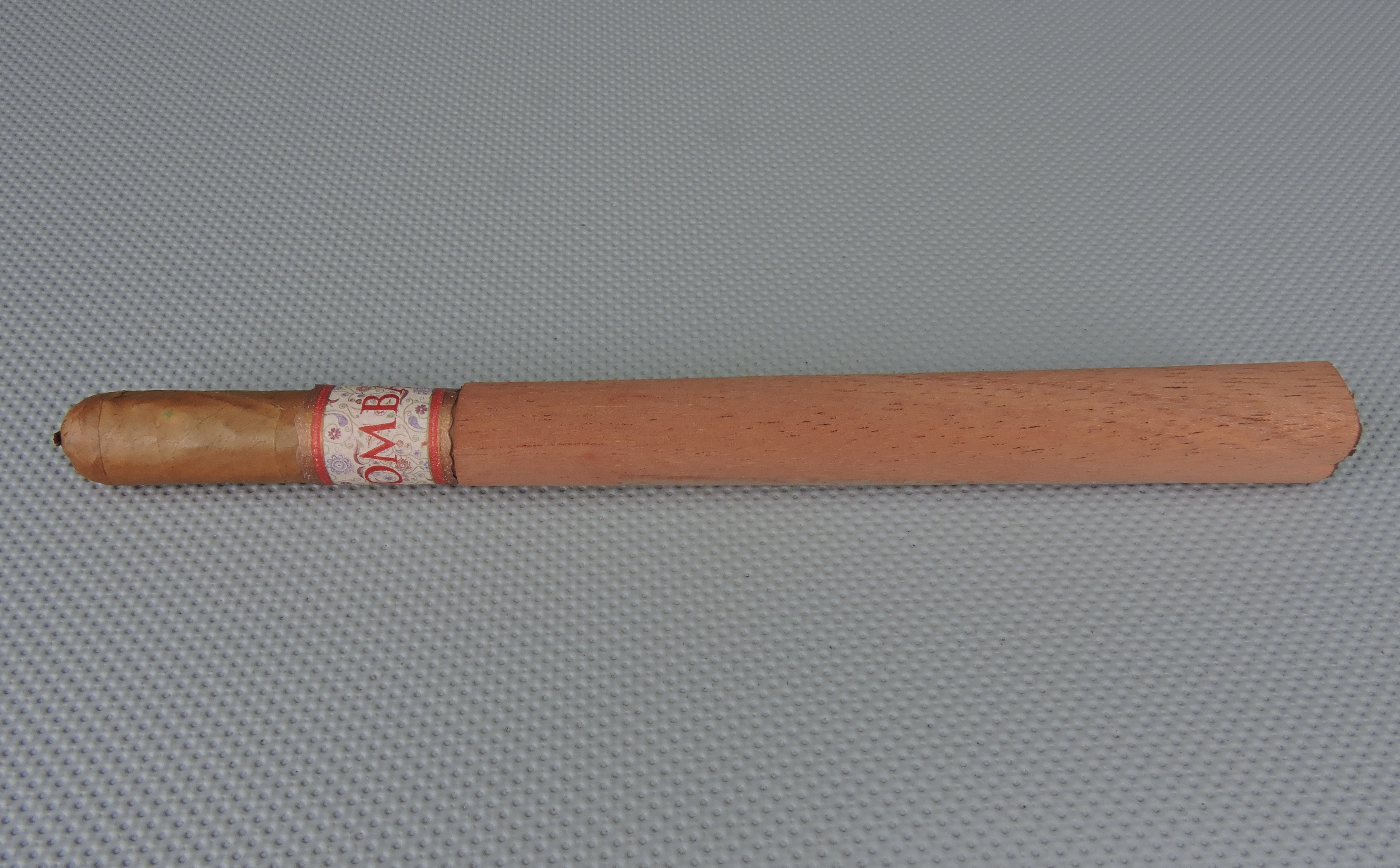 After removing the cedar sleeve from the MBombay Vintage Reserve Lancero 1973, I went with a straight cut to remove the cap. While I could have pulled the pig-tail off, I choose to clip the cap and remove both the cap and pig-tail simultaneously.

Once the cap was removed, I moved on to the pre-light draw. The color draw delivered some of the cedar notes I expected as a result from the cedar sleeve wrapped around the cigar. I also picked up notes of wood and slight creamy texture. Overall I considered this to be a satisfactory pre-light draw. At this point, I was ready to light up the MBombay Vintage Reserve Lancero 1973 and awaited what the smoking phase would deliver.

The start of the MBombay Vintage Reserve Lancero 1973 delivered notes of generic wood and white pepper. As the cigar burned through the brushed footer section, I didn’t find much change. The white pepper was present on the retro-hale as well.  Once I got to the wrapper I got to the wrapper section, the flavor profile opened up with a mix of cedar and caramel notes in the forefront with notes of pepper and hay in the background. Meanwhile the white pepper continued to be present on the retro-hale.

During the second third, the herbal note that I often get from Peruvian tobaccos surfaced. This joined the cedar and natural tobacco sweetness in the forefront. Just past the midway point, I noticed both the natural tobacco sweetness diminished. This was followed by the herbal note diminishing. Toward the end of the second third, the cedar note was primary note.

As the Vintage Reserve Lancero 1973 moved into the final third, I found the hay notes now were mixed in with the cedar flavors. There was more of an increase in pepper on the tongue, but it still was a secondary note. I still got hints of natural tobacco sweetness and herbal notes right until the end. The resulting nub was firm to the touch and cool in temperature.

Overall, I found the burn scored very nicely on the MBombay Vintage Reserve Lancero 1973. The cigar burned relatively cleanly through the rough-cut portion of the cigar. It wasn’t the tightest ash during this section, but it wasn’t overly loose, nor messy. Once the cigar started burning through the wrapper, the ash became more firm. The ash itself had a salt and pepper color.

Throughout the cigar experience, the cigar burned on a straight path and had a relatively straight burn line. This was not a cigar that required frequent touch-ups. Meanwhile the burn rate and burn temperature were both ideal. 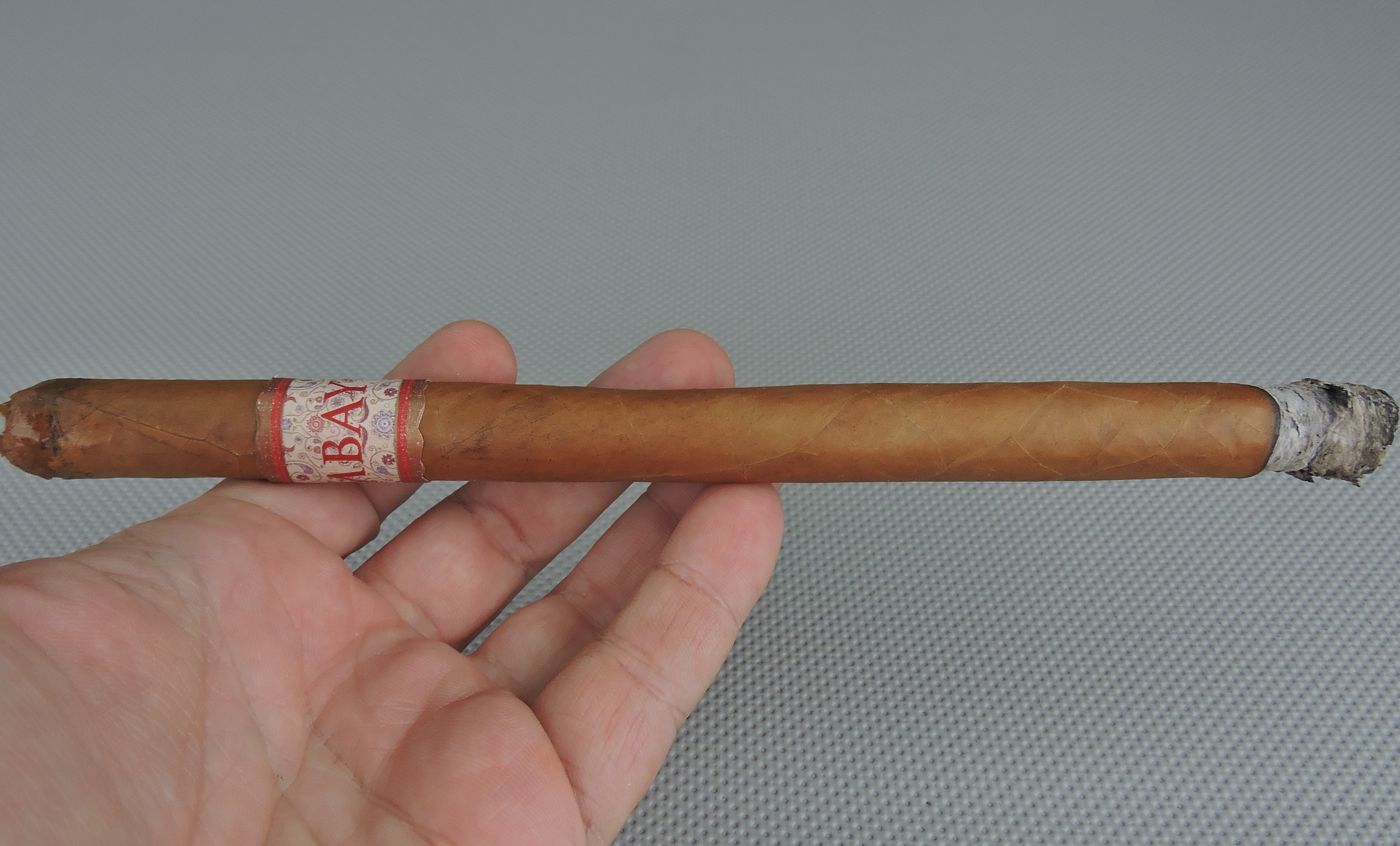 The draw to this lancero also scored very well. This cigar seemed to have just the right balance of resistance and openness to make this a low maintenance cigar to puff on and derive the flavors from.

Given there were some older tobaccos in this blend, I was prepared for a blend on the milder side. Instead I got a cigar that was medium strength and medium-bodied from start to finish. I found this medium profile meshed extremely well with the flavor profile of the MBombay Vintage Reserve Lancero 1973.

In terms of strength versus body, I found both attributes balanced each other very nicely and neither overshadowed the other.

As I said, 2016 had already been a great year for Shah and Bombay Tobak, and the MBombay Vintage Reserve Lancero 1973 has added to that story.. Overall, this is a cigar that fired on all cylinders. It delivered excellent flavor, had a nice amount of complexity, and excellent construction. While it did lose a little steam in the last third, I would still say this 8 1/2 inch cigar performed quite well during the span of the smoking experience – and it’s still something you want to smoke right down to the nub. As for the vintage tobaccos. there is something intangible about smoking a cigar that contains this type of tobacco, and it’s something that I found to be a positive. Overall this is a cigar I would not hesitate to recommend to either a novice or experienced cigar enthusiast. As for myself, this is a cigar I would smoke again and it’s one I would fight Chuck Norris for.