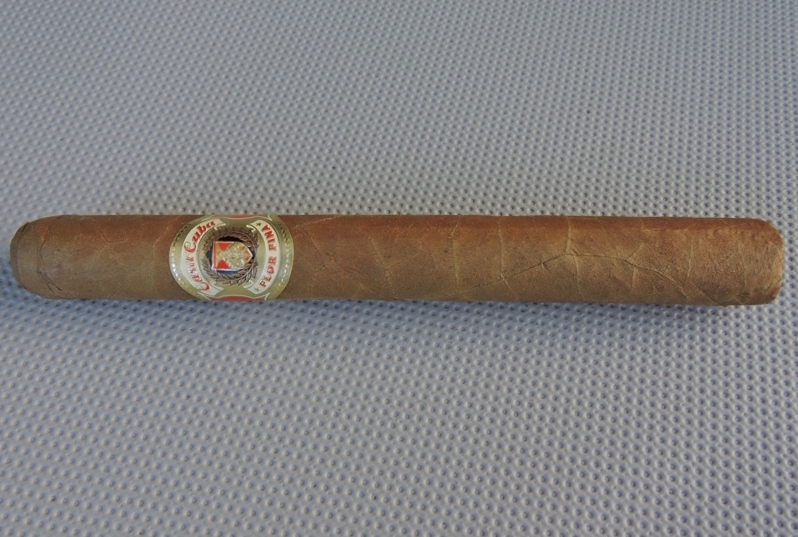 The original Casa Cuba brand was a creation of Fuente Sr. The brand itself is unique to Fuente in that it doesn’t carry the Fuente name on the packaging. Casa Cuba was originally soft-launched to select retailers in late 2013. At the time, it was released with a special secondary band that said “Pre Release 2013”. Once Casa Cuba became more widely available, the secondary band was dropped. While the Casa Cuba line is a regular production offering, the Divine Inspiration is a more limited release.

Without further ado, let’s take a closer look at the Casa Cuba Divine Inspiration and see what this cigar brings to the table.

Casa Cuba Divine Inspiration is blended at the Fuente’s Tabacalera A. Fuente y Cia factory in the Dominican Republic. It features an Ecuadorian wrapper over Dominican binder and filler. Arturo Fuente Cigars has said this is a different blend that the original Casa Cuba; however to what extend, we do not know.

The Casa Cuba Divine Inspiration has been released in one size – a 6 1/8 x 47 Short Churchill. The cigar is packaged in 30 count boxes.

The Ecuadorian wrapper of the Casa Cuba Divine Inspiration has a slightly weathered looking light brown color to it. The wrapper itself seemed a couple of shades darker than a typical Connecticut Shade wrapper would look like. There was a light coating of oil on the wrapper. The wrapper itself had some visible veins and visible wrapper seams.

Prior to lighting up the Casa Cuba Divine Inspiration, I went with my usual choice of a straight cut to remove the cap. Once the cap was removed, I moved on to the pre-light draw. The dry draw had a unique sweetness to it. This sweetness was had elements of cedar, natural tobacco, and a sweet herb note. Overall I considered this to be a very good pre-light draw. At this point I was ready to light up the Casa Cuba Divine Inspiration and see what the smoking experience had in store.

The start of the Casa Cuba Divine Inspiration picked up where the pre-light draw left of as I picked up additional notes of cedar, natural tobacco, and sweet herbs. This combination delivered a similar unique sweetness that I derived on the pre-light draw. During this early stage, there was not a dominant note that was present. Meanwhile on the retro-hale delivered notes of red pepper.

As the Casa Cuba Divine Inspiration moved through the first third; the cedar / natural tobacco / herbal combination remained in the forefront. In the background a baker’s spice also emerged – delivering a slight amount of additional sweetness and spice. I also detected a subtle salty component in the background.

During the second third, the primary notes switched to more of a combination of cedar and herb notes with the natural tobacco component moving into the background. The sweetness in the forefront varied at different degrees, but to some extent it was diminishing overall. Meanwhile the baker’s spice and salty component also remained in the background.

By the final third of the Casa Cuba Divine Inspiration saw an earth note replace the cedar in the forefront. The herbal notes were also still present in the forefront. Meanwhile the cedar moved into the background with the salty component. By this stage, there still was a touch of sweetness, but most of it had diminished. When the cigar experience came to a close, the resulting nub was firm to the touch and cool in temperature.

Overall the burn and draw of the Casa Cuba Divine Inspiration  performed scored very nicely. There was a slight curvature on the burn line of the Divine Inspiration, but overall I found the cigar still took a straight path with its burn. This was a cigar never in danger of tunneling or canoeing. The resulting ash had a silver gray color with some darker speckling in it. This was an ash that was on the firmer side. Meanwhile the burn rate and burn temperature were both ideal.

The draw to the Casa Cuba Divine Inspiration performed quite well. This has a draw that I would describe as open, but not loose. Overall, this was a low maintenance cigar to derive flavors from.

In terms of strength, I found the Casa Cuba Divine Inspiration to be at a medium level for the first two thirds of the smoking experience. By the last third, I found there was a slight increase in strength pushing just over the threshold into medium to full territory. From a body standpoint, I found the flavors of the Divine Inspiration started out medium to full. The body slowly built up and by the second half, I found this to be a full-bodied smoke. During the second half, the increase in body did level off.

When looking at strength versus body with the Casa Cuba Divine Inspiration, I found the body to have the edge throughout the smoking experience.

When the original Casa Cuba line first came out, I found it to be a very different  offering than anything else offered in the Arturo Fuente portfolio. In terms of the Casa Cuba Divine Inspiration, it also is a unique offering – although I did find some more traditional Fuente qualities in this blend. Overall I found it to be a positive smoking experience. As I’ve stated in other assessments, I think sometimes sweetness can go overboard on a cigar. With the Divine Inspiration, it’s not heavy on the sweetness, but it is a predominant note – particularly in the first half. On the either hand, I found this to be a unique sweetness – and that made this enjoyable. At the same time given this is a unique flavor, this might not be a cigar for everybody. Finally, while this was a well-aged cigar, I’m curious to see what longer term aging does to this cigar.

This is a cigar that I’d steer to an experienced cigar enthusiast, but it’s one I wouldn’t discourage a novice from trying either. As for myself, this is a cigar I’d smoke again – and it’s worthy of a box split.