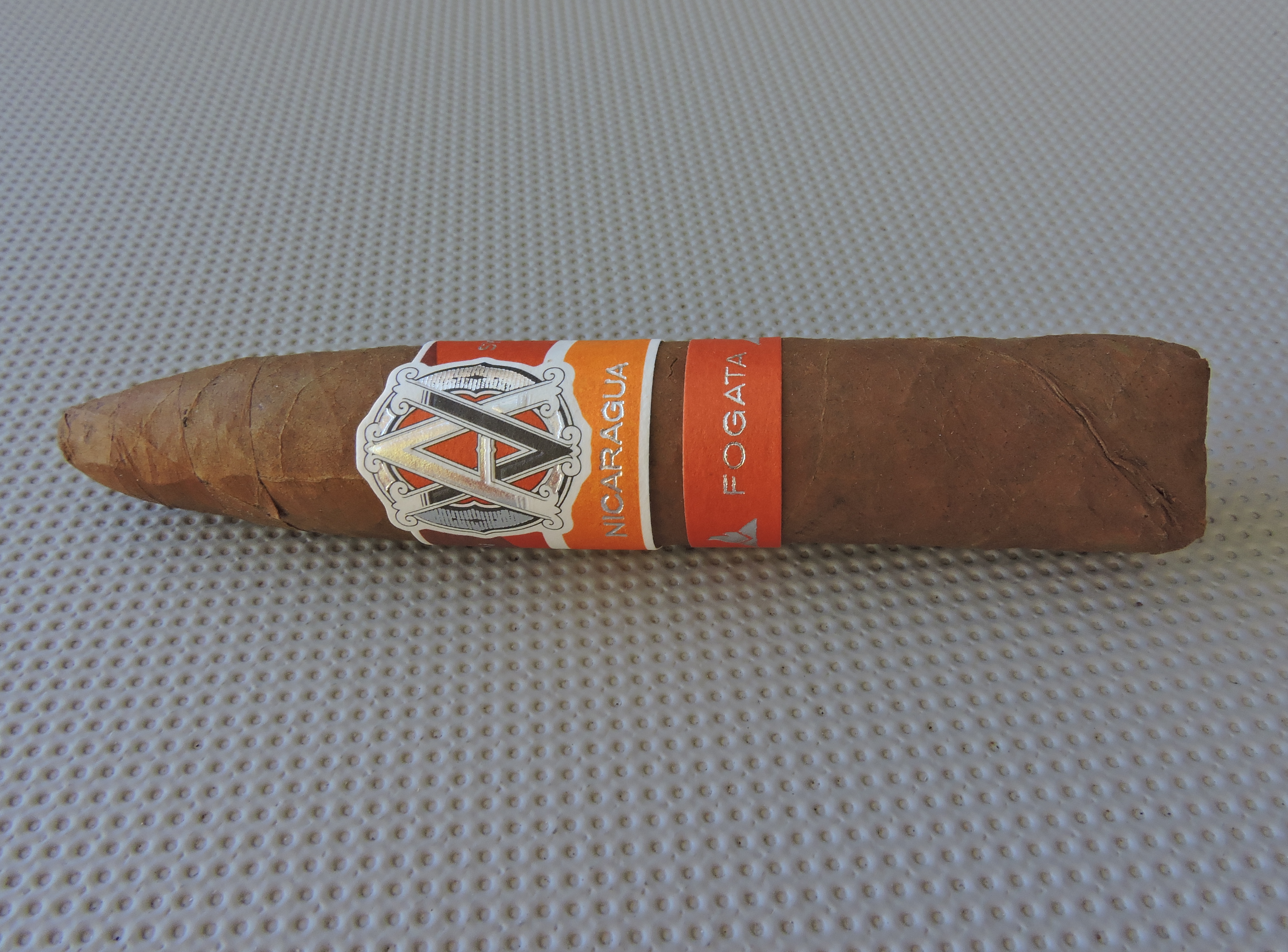 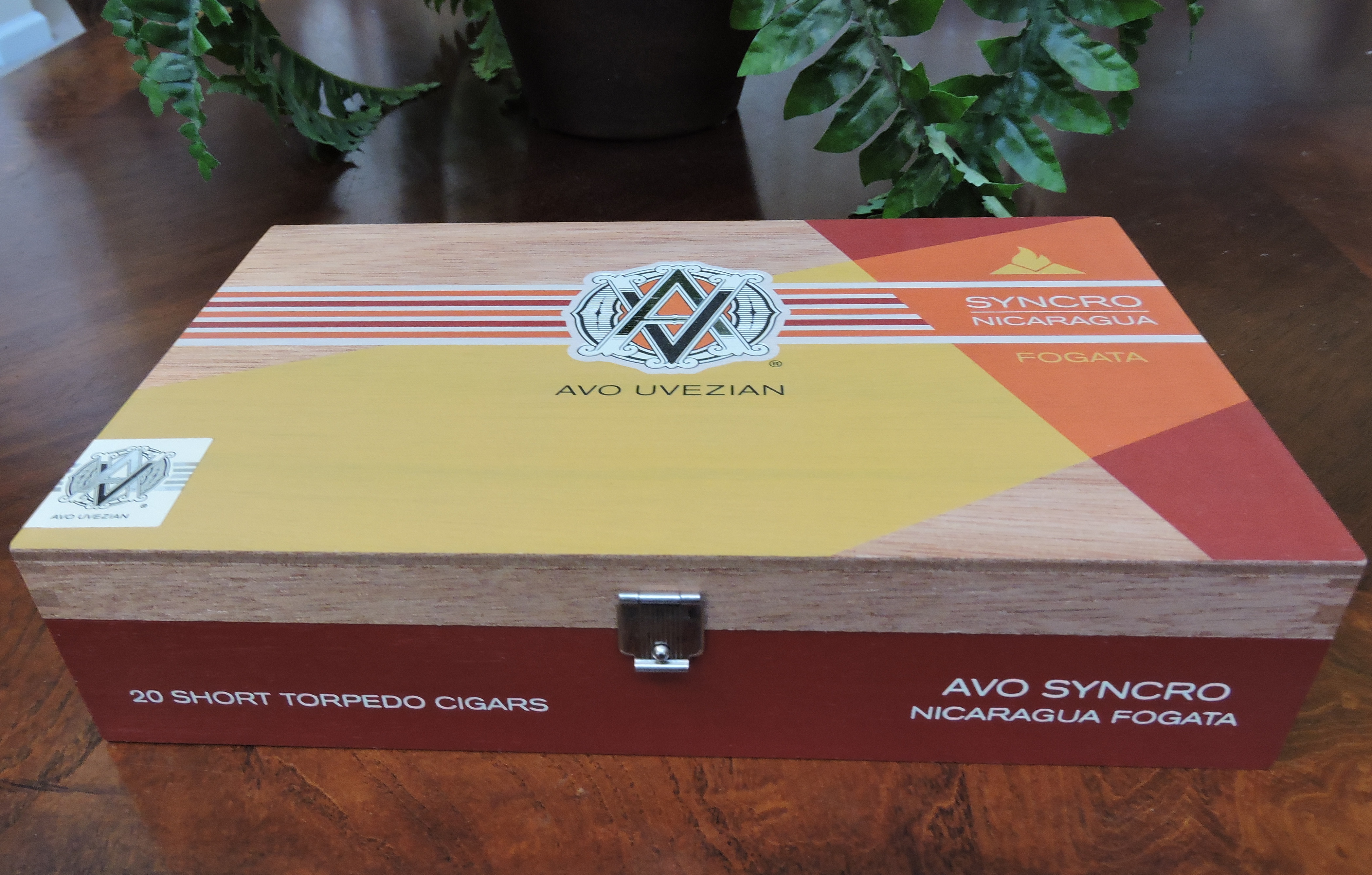 The Avo brand draws its inspiration from brand ambassador Avo Uvezian’s musical roots. The name “Syncro” is a play on the theme of synchronization in music. At the same time, this is also carried over into the cigar experience. Obviously,the “Nicaragua” in the cigar name reflects the use of the Nicaraguan tobacco. In addition to Nicaraguan tobacco, the Fogata also contains Dominican tobacco. With tobaccos from these two countries, it is meant to bring a synchronization of both a Nicaraguan and Dominican cigar experience – thus the Syncro name. As for the name Fogata, it means bonfire or campfire, and happens to be a personal favorite setting of Uvezian. 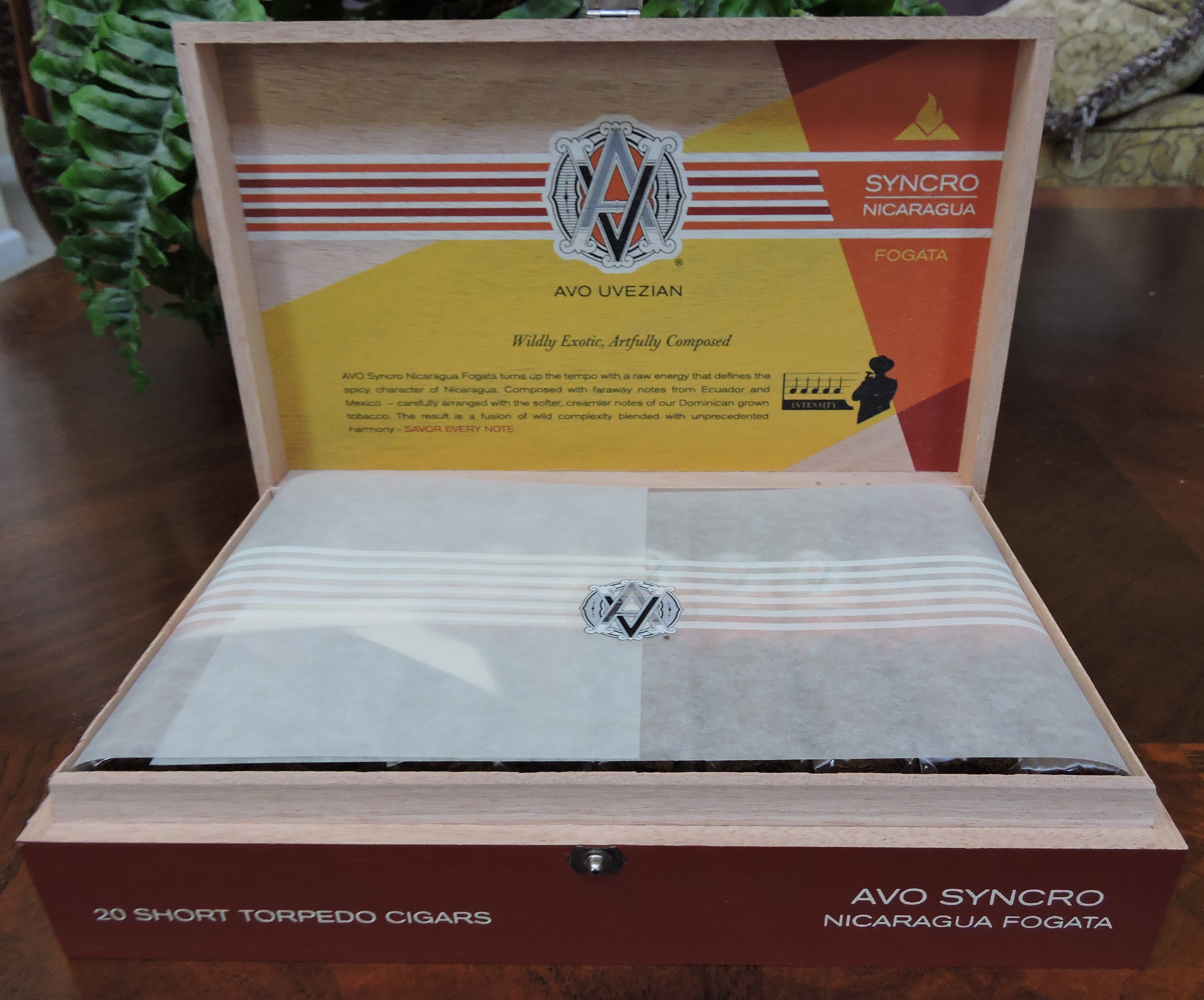 Inside packaging of the Avo Syncro Nicaragua Fogata Short Torpedo

Without further ado, let’s break down the Avo Syncro Nicaragua Fogata Short Torpedo and see what this cigar brings to the table.

The Avo Syncro Nicaragua Fogata is available in four sizes. Each of the four sizes are packaged in 20 count boxes. 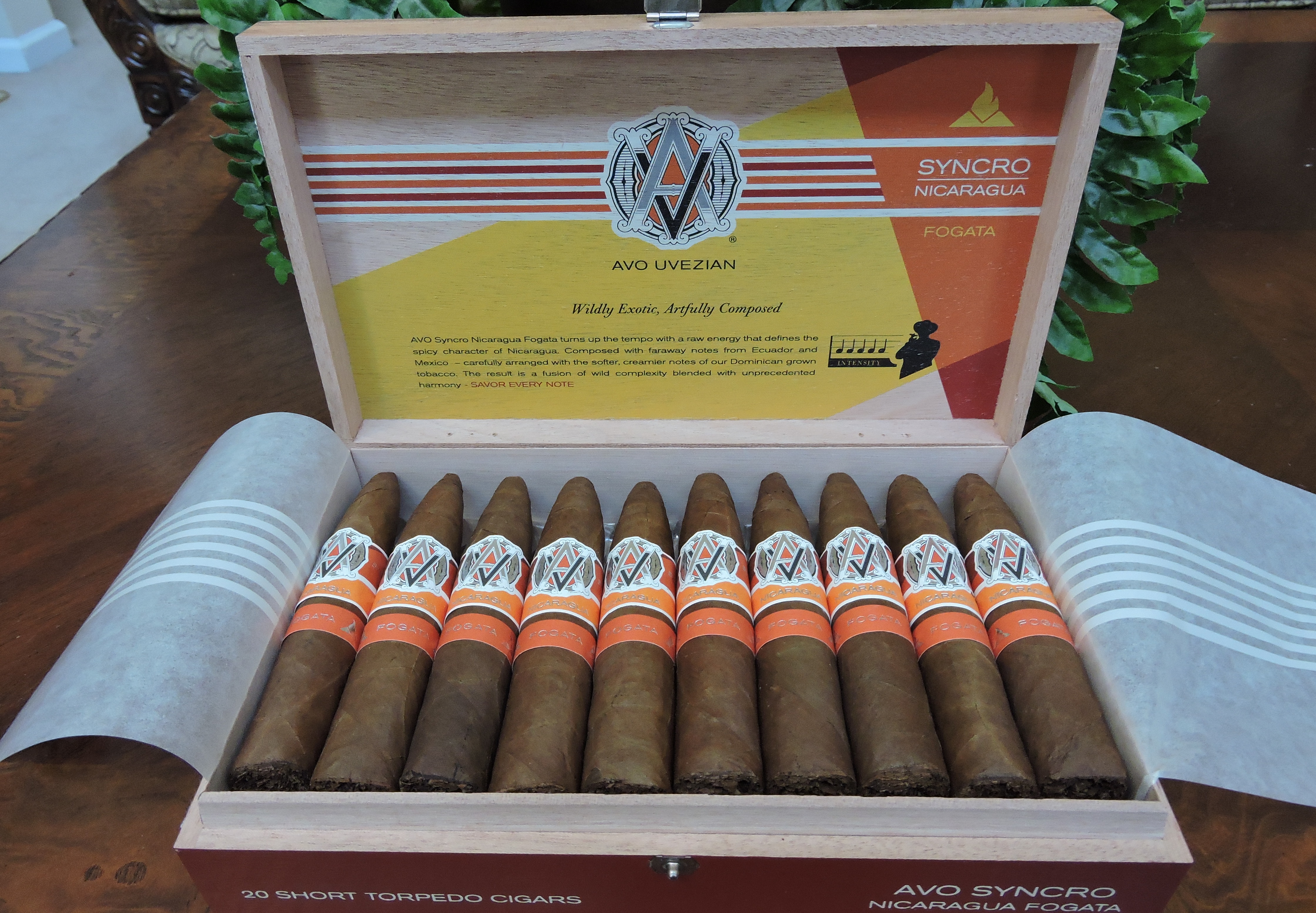 The Avo Syncro Nicaragua Fogata Short Torpedo’s Habana wrapper has a medium brown color. Depending on how the light shines on it, it might have a slight colorado red tint. There was not much in the way of oil on the surface. I found the wrapper had a slightly bumpy feel to it. There were several visible veins on the surface of the wrapper. Most of the wrapper seams that were visible were on the very thin side. The torpedo tip has a slightly sharp taper to it. 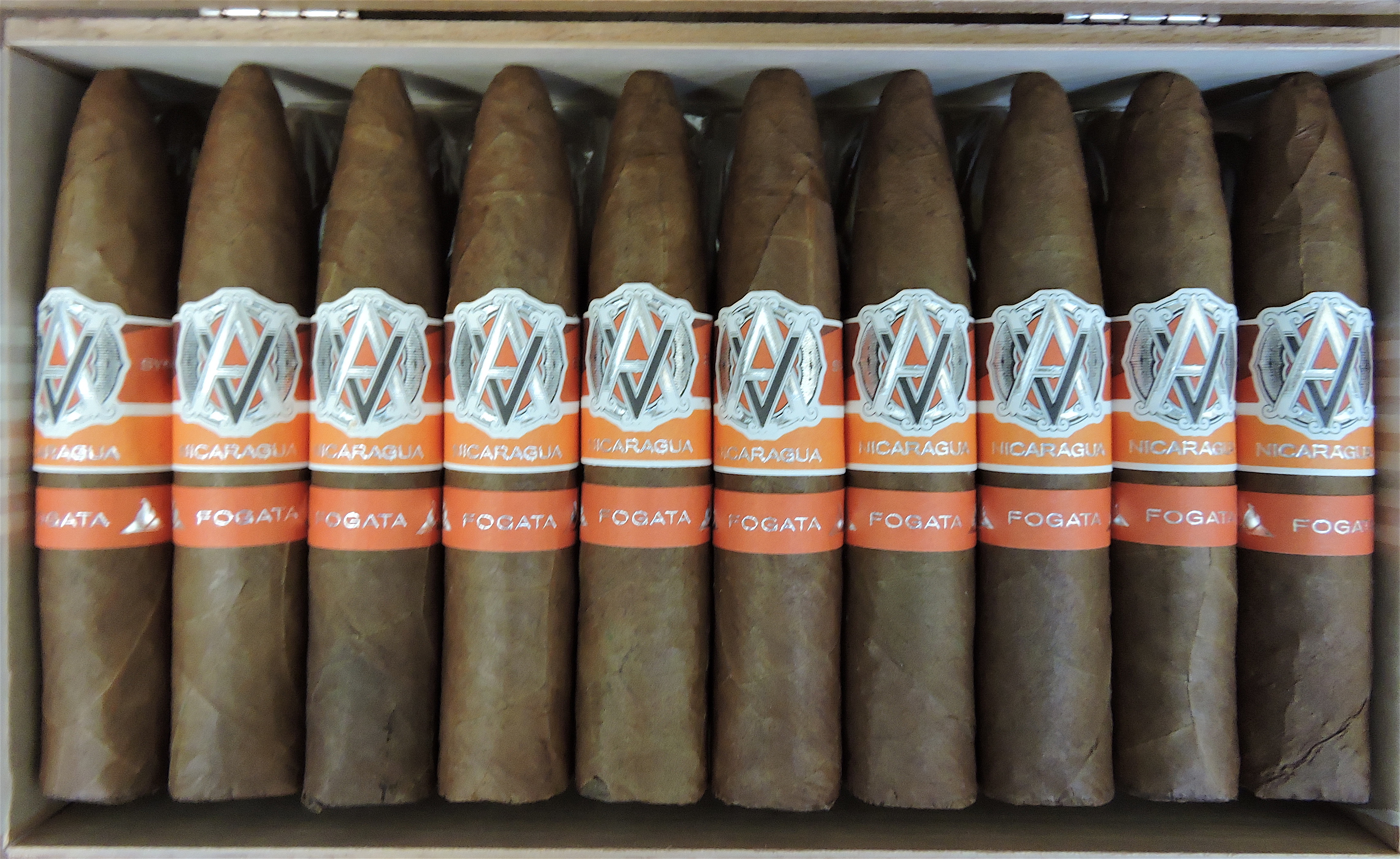 There are two bands on the Avo Syncro Nicaragua Fogata. The primary band of the Fogata is similar in design to the original Syncro Nicaragua, but with a different color scheme. Prominently on the center of the band is a white, gray, and silver Avo logo. Surrounding the Avo logo on the upper 2/3 of the band is both orange and rust coloring with white trim. To the left of the logo is the text “AVO UVEZIAN” in small silver font. To the right of the logo is the text “SYNCRO” in small silver font. The lower third of the band is yellow-orange colored background with white trim on the lower portion. On the background is the text “NICARAGUA” in silver font.

The secondary band rests below the primary band. It is orange in color with silver font. On the center of the band is the text “FOGATA”. To the left and right of that text is a small campfire-like design.

As I typically do for torpedo and belicoso vitolas, I used my Credo Special T cutter with the 36 ring gauge hole to get an ideal cut on the Avo Syncro Nicaragua Fogata Short Torpedo. Once the tip was successful removed, I moved on to the pre-light draw. The cold draw delivered a mix of  wood, orange, and cinnamon spice. Overall I considered this to be a very good pre-light draw. At this point I was ready to light up the Fogata Short Torpedo and see what the smoking experience would have in store.

The start to the Avo Syncro Nicaragua Fogata Short Torpedo started with notes of wood and earth. In the background I detected a mix of cedar and baker’s spice. In addition to some spice in the background, the cedar / baker’s spice also delivered some sweetness. The cedar had a slight lingering effect on the after-draw. Meanwhile the retro-hale produced of cedar and assorted pepper spices.

Later in the first third, I started to see the cedar / baker’s spice combination start to make its way into the forefront from time to time. In the background I also detected a mineral note as well as a subtle grassy note. This pattern continued through the second third.

During the last third of the Fogata Short Torpedo, the woody and earth combination remained in the forefront. While the cedar / baker’s spice combination was still remained in the forefront, I found I was now getting more in the way of spice from these notes as opposed to sweetness. There still were some mineral and grassy notes in the distant background. This is the way the cigar experience came to a close. The resulting nub was firm to the touch and cool in temperature.

The burn to the Avo Syncro Fogata Short Torpedo had a slight amount of jaggedness from point to point. While this did require some additional touch-ups along the way, I didn’t find the amount to be excessive. The Fogata Short Torpedo did maintain a straight burn path and was never in danger of canoeing or tunneling. While the resulting ash does appear to look loose in the photo below, I didn’t find this to be the case. At the same time, this wasn’t an overly firm ash either. The ash had a classic salt and pepper color scheme. The burn temperature was ideal. I did find the burn rate to be ideal as well, but the short torpedo format is going to be a quicker smoke because of the short length and tapering of the cigar. In a nutshell, the shape of this cigar will contribute to a shorter smoking time and give a perception of a faster burn. 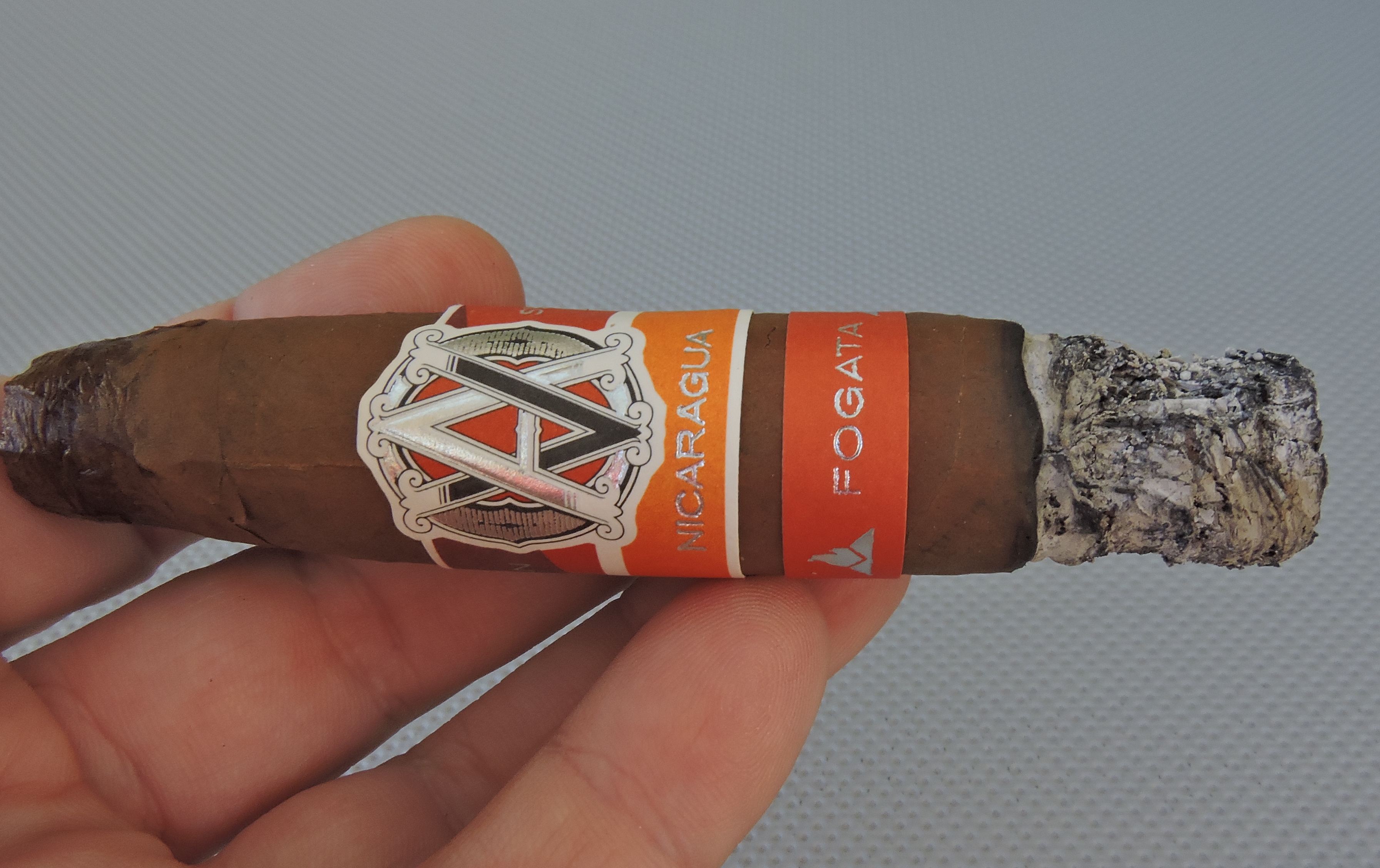 The draw to the Fogata Short Torpedo was ideal. It was not too loose, nor too tight. I found the torpedo tip to be well constructed and this contributed to an excellent draw.

From a strength and body perspective, this cigar is was a solid medium from start to finish. During the course of the cigar experience, there was a slight increase in both the strength and body – however both attributes didn’t cross into medium to full territory. When looking at strength versus body, I found both attributes to balance each other nicely with neither one overshadowing the other.

One thing that really has set Davidoff apart from other companies has been its innovation strategy – and the company seems to be executing on them very well. The incorporation of Nicaraguan tobaccos into brands such as Avo is an example of this strategy. The company had great success with the first Avo Syncro Nicaragua – and is poised to continue the journey with the new Fogata. Overall I found the Short Torpedo format worked quite well with this blend. The only problem is that it is a “Shorter” Torpedo and this cigar had me wanting more. I found this cigar to deliver a very unique profile in the Davidoff portfolio and in the end it delivered a satisfying smoke.

Overall the Avo Syncro Nicaragua Fogata Short Torpedo is a cigar I could recommend to a novice or experienced cigar enthusiast. As for myself, this is a cigar I would smoke again – and it’s worthy of a box split.