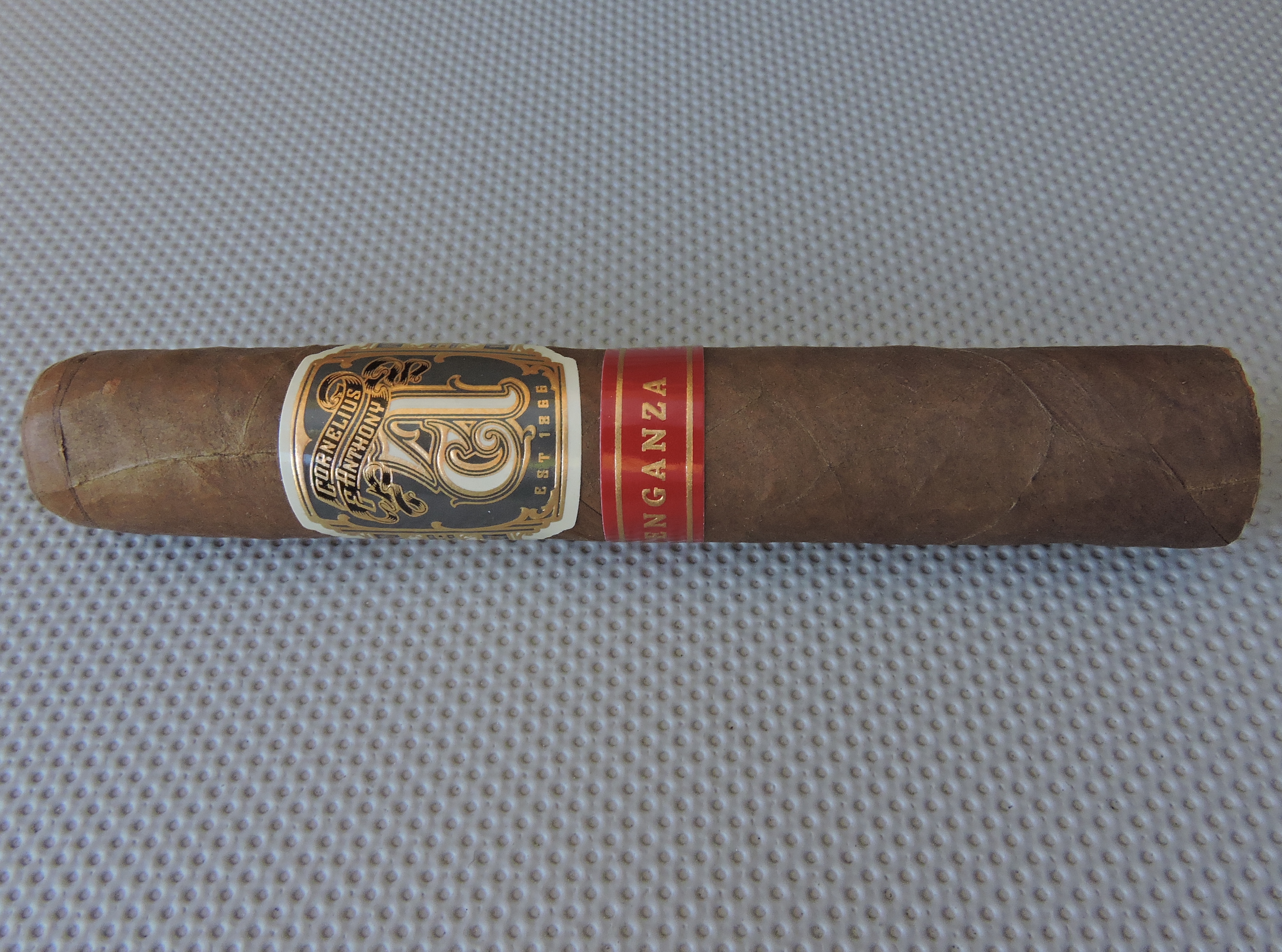 While Cornelius & Anthony has been on the premium cigar market for a couple of years, 2016 was a year where the company restructured its portfolio with four lines. Three of these lines (Venganza, Daddy Mac, and a revamped Meridian line) are being produced at La Zona. The fourth line, Cornelius is being produced in the U.S. at the El Titan de Bronze factory in Little Havana.

The name Venganza, it translates to “vengeance”. The packaging for the Cornelius & Anthony Venganza features artwork of the patent of the Bailey Machine Gun. It was designed by Fortune Bailey (we were told no relation to current owner Steven Bailey). Sometimes called the Gatling Gun, the Bailey Machine Gun is a rapid fire machine gun. It is symbolic of the power behind this cigar. The slogan “Use only Venganza-Caliber Stogies for Maximum Effect” appears on this art work. 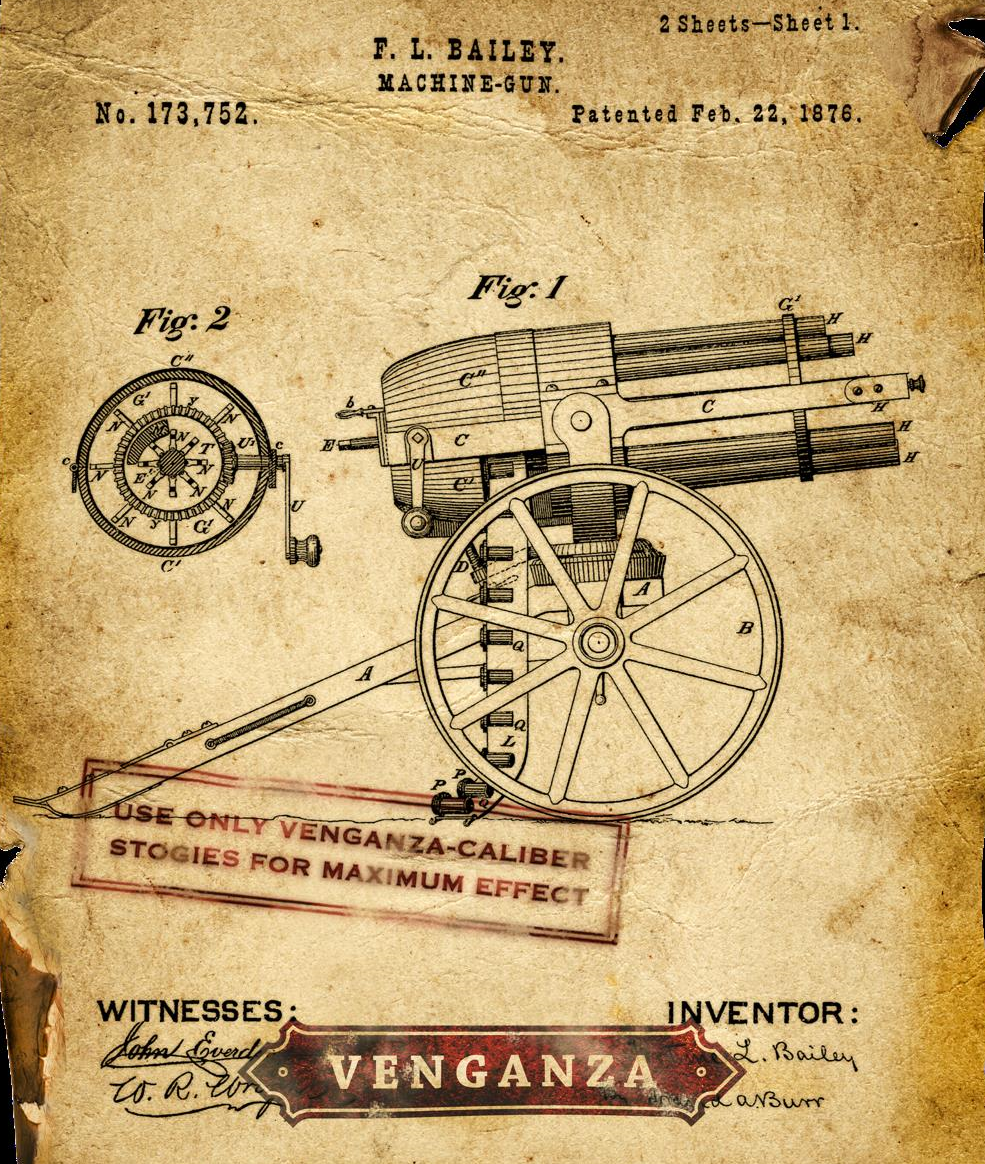 At a glance, let’s take a look at the Cornelius & Anthony Venganza Robusto and see what this cigar brings to the table:

The Venganza will be available in four sizes – each in 20 count boxes.

The Ecuadorian wrapper of the Cornelius & Anthony Venganza Robusto has a medium color. Depending on how the light hits it, the Venganza Robusto may give off a slight rosado tint. The wrapper has a light coating of oil. There are some visible veins and some visible wrapper seams. Overall I would consider the surface of the wrapper to be somewhat bumpy.

There are two bands to the Cornelius & Anthony Venganza. The primary band is the same one found on across other Cornelius & Anthony lines. This is a band that is gray in color with white trim. Prominently displayed on the front of the band is the large white and gold interlocking “CA” logo. Above the logo are two gray ribbon designs trimmed in gold. One ribbon has the text “CORNELIUS” and the other has the text “& ANTHONY” – both in gold font. Below the “CA” logo is the text “EST 1866” in small gold font. There are also some gold adornments on the front of the band. On both the left and right side of the band are a series of white, gold, and gray stripe patterns.

The secondary band sits just below the primary one. It is red in color with gold pinstripes near the top and bottom. In between the pinstripes is the text “VENGANZA” in gold font.

Before lighting up the Cornelius & Anthony Venganza Robusto, I went with my usual choice of a straight cut to remove the cap. After successfully clipping the cap, I moved on to the pre-light draw. The dry draw delivered note of cinnamon, wood, cream, and a slight black pepper note. Overall I considered the pre-light draw of this cigar to be very good. At this point I was ready to light up the Venganza Robusto and see what the smoking experience would have in store.

The start to the Cornelius & Anthony Venganza Robusto delivered notes of black pepper, wood, and a creamy undertone. During the early stages, an interesting cherry-like sweetness that almost reminded me of cherries jubilee emerged. This cherry note quickly moved into the forefront. Meanwhile, the black pepper and wood, and creamy undertone moved into the background. As for the retro-hale, it delivered a moderate, black pepper spice.

The cherry note continued to be primary throughout the first half of the Venganza Robusto. Toward the midway point, an earthy note displaced the cherry note in the forefront. The creamy notes were also quite prominent creating for lack of a better term “a creamy earthy note”. Meanwhile, a cinnamon note also surfaced in the background joining the black pepper and cherry notes. The generic wood notes had now dissipated by this point.

During the last third, the flavor profile remained similar – namely the creamy earth notes remained in the forefront with the cinnamon, black pepper and cherry in the background. The big difference was the black pepper notes intensified and moved closer to the forefront. The cherry sweetness and cinnamon didn’t dissipate and provided the right amount of balance in the background. Toward the very end, there was a touch of harshness, by this point, it was time to put the cigar down. This is the way Cornelius & Anthony Venganza Robusto came to a close. The resulting nub was firm to the touch and cool in temperature.

The burn to the Cornelius & Anthony Venganza Robusto maintained a straight burn path from start to finish. There was some jaggedness on the actual burn line from start to finish. I found the Venganza Robusto needed a normal, but not excessive amount of touch-ups. The resulting ash had a salt and pepper color and was on the firm side. As for the burn rate and burn temperature, both were ideal throughout the smoking experience. 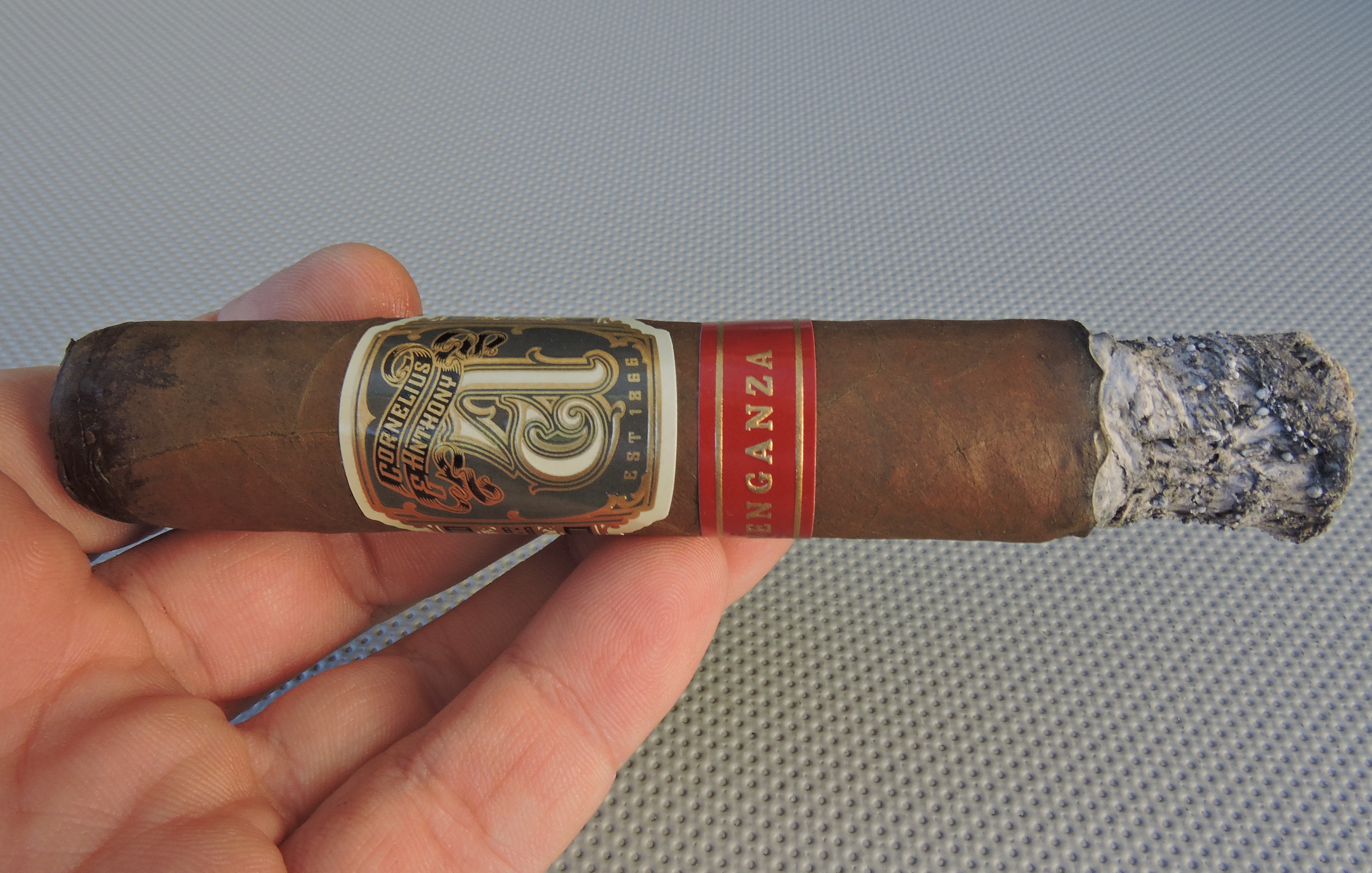 No doubt, the Cornelius & Anthony Venganza Robusto lives up as advertised. This was a full strength cigar out of the gate – and remained that way from start to finish. In fact, I found strength-wise that the Venganza Robusto could be the one of the most powerful cigars to ever come out of La Zona.

Meanwhile, when you factor the retro-hale in, the Venganza Robusto also qualifies as a full-bodied smoke. Comparing strength versus body, I found a slight edge to the strength.

The noticeable thing about the Venganza Robusto is going to be the full strength, full-bodied profile. However one thing that might go unnoticed are some of the characteristics cigar’s flavor profile. Not only did I find this to be a very good combination of flavors, but it also seemed to be quite different than anything I have gotten out of La Zona in the past. Combined the experience of the Venganza Robusto with my most recent experience with the Cornelius & Anthony Daddy Mac and its clear that Cornelius & Anthony has established a strong partnership with La Zona. Given this cigar’s firepower; I would steer the cigar to a more experienced cigar enthusiast looking for a smoking experience with this profile. As for myself, this is a cigar I would smoke again – and it’s one that certainly is box worthy.