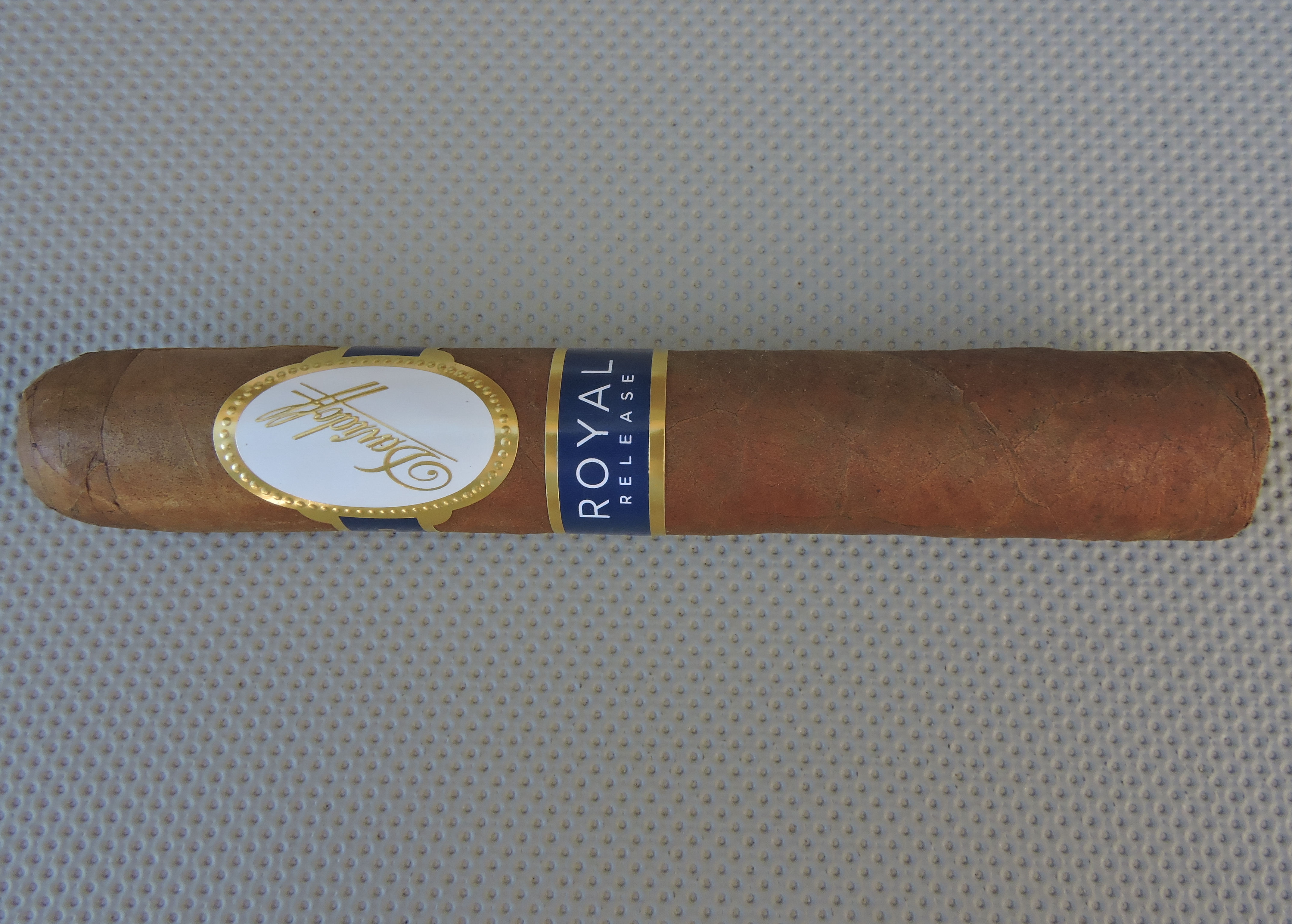 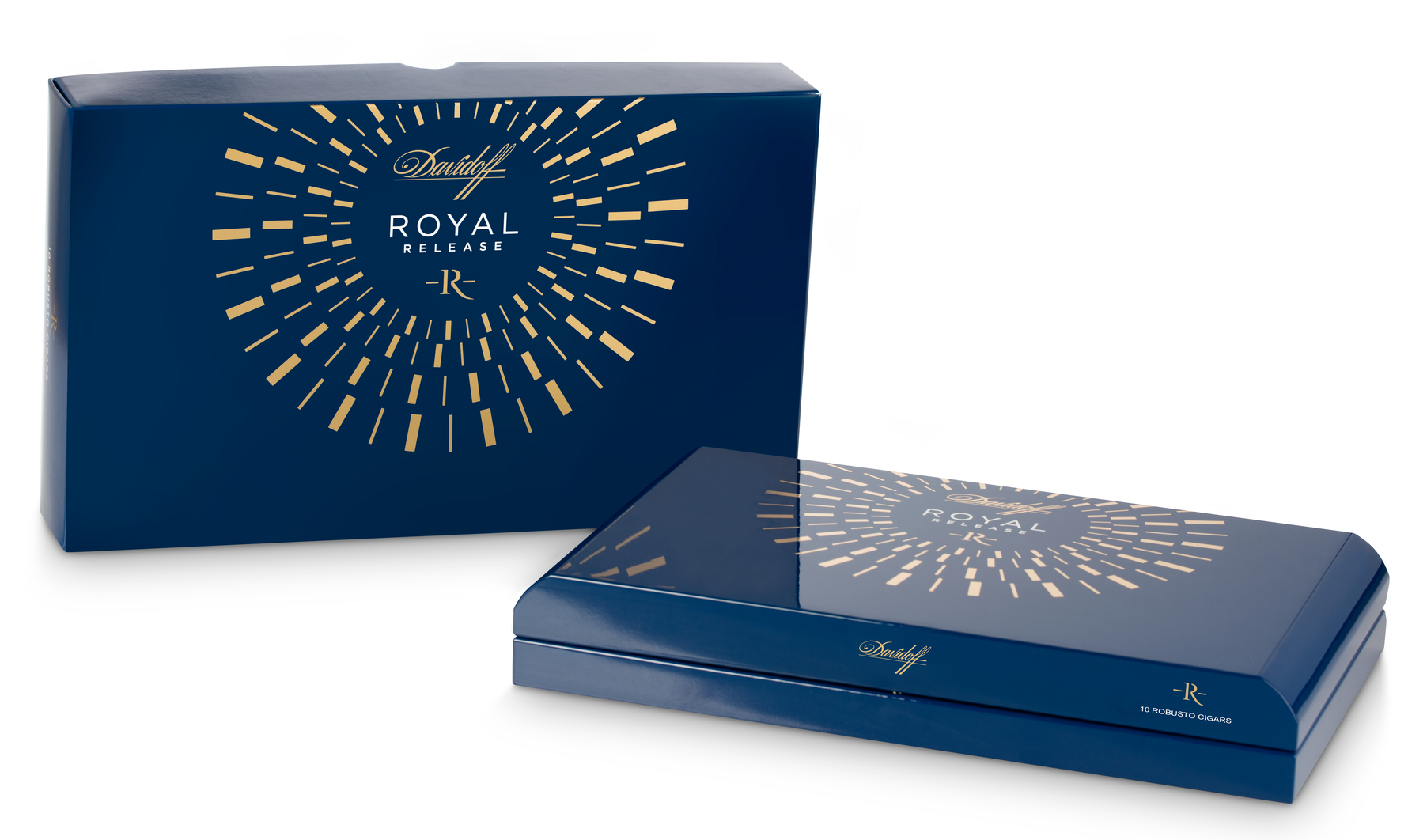 When we first reported on the Davidoff Royal Release, we described some of the details on what contributes to making these cigars in the $80.00 to $100.00 range:

Davidoff says thet everything about Royal Release line is “hand picked” using the best materials and talent – namely from the point where the seeds were selected to the point when the cigars are produced and packaged. According to Davidoff, the tobacco seeds used in the blend “were created, germinated, and cultivated especially for this purpose. The tobaccos come from a 2004-05 harvest that had a year of near perfect growing conditions and ideal rainfall. In addition, bales allocated for this project were aged for eight years. In terms of rolling the cigar, eight of Davidoff’s best Master Rollers were selected. These rollers have fifteen years experience and have rolled seven million cigars between them.

Like when I first reviewed the Padron 50th Anniversary Maduro (which initially saw price points of $106.00 by retailers), I faced a similar decision in reviewing the Davidoff Royal Release Robusto – namely how to position the review of a cigar priced at $80.00. Cigar Coop uses two mechanisms to assess: One component is a numerical score that is based on merit and non inclusive of price. The other is the Assessment rating – more of a value rating where price is factored in. The problem with reviewing it is that there is an unrealistic expectation to recommend someone to buy a cigar at an 80 dollar price point. In the case of Royal Release Robusto, these mechanisms are mutually exclusive and not dependent on one another.

Without further ado, let’s break down the Davidoff Royal Release Robusto and see what this cigar brings to the table.

As the name indicates, the Aromatica Dominicana wrapper comes from the Dominican Republic. The cigar also uses an Ecuadorian Habano binder over Dominican fillers.

As mentioned the Davidoff Royal Release comes in two sizes. Each of these offerings are package in ten count boxes. 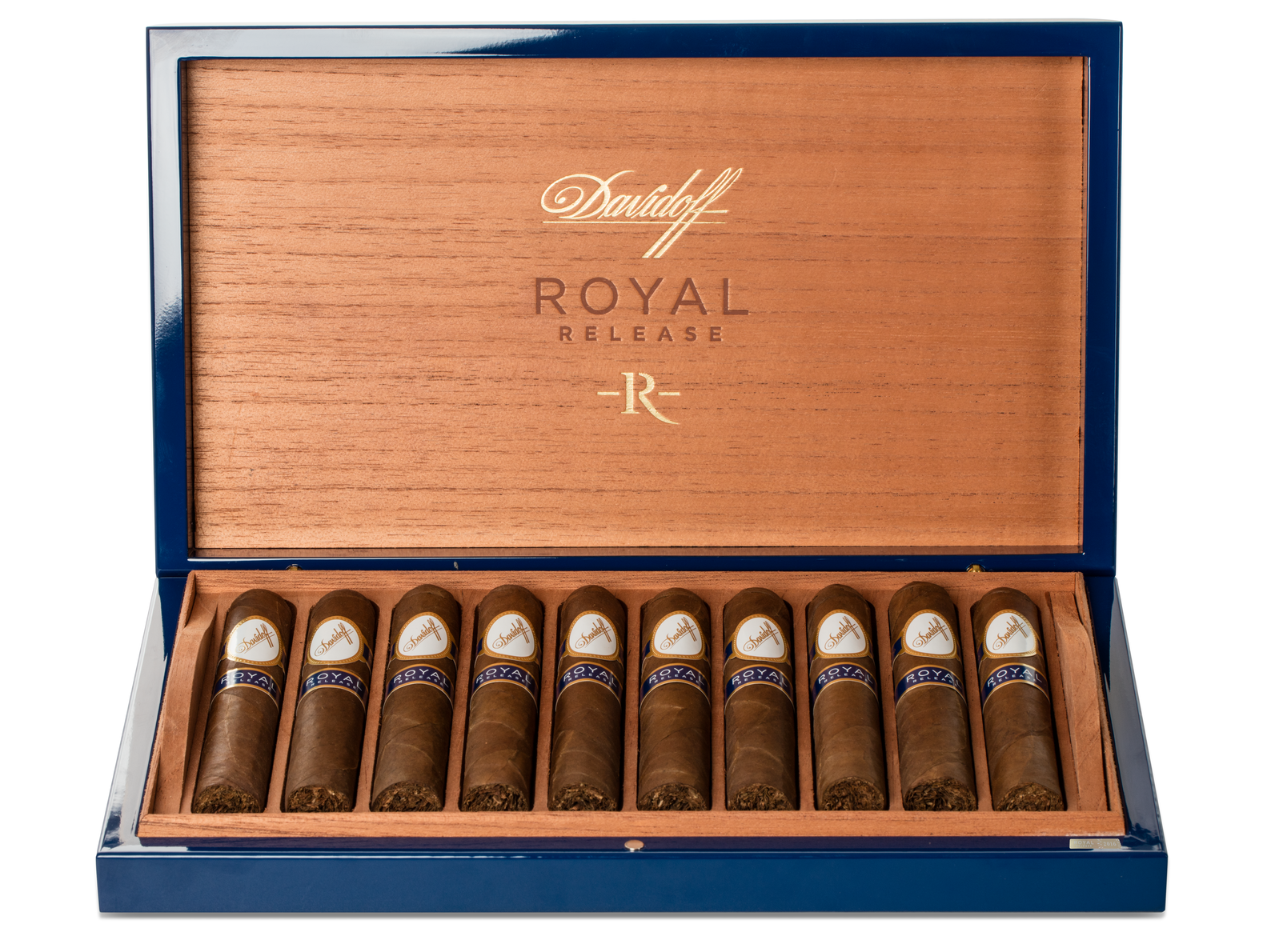 When looking at the Aromatica Dominicana of the Davidoff Royal Release Robusto, it is visually one of the most stunning wrappers I have ever seen. Our photo does not do it justice. It has a caramel color that will pick up a slight reddish tint depending who the light shines on it. The wrapper is definitely on the smooth side. There is some oil on the surface. The veins and wrapper seams that are visible are on the thin side.

There are two bands on the Davidoff Royal Release. The primary band is a more elegant variation of the Davidoff White Label band. This band features additional gold trim with blue color integrated into part of the design. On the center of the band is the text  “Davidoff” in classic cursive gold-colored font on an oval field of white. There are small gold circles going around the perimeter of the oval; but unlike White Label  bands, these circles are embossed on gold trim going around the oval. To the left of the oval is the text “ROYAL” in gold font on a royal blue background. To the right of the oval is the text “GENEVE” in gold font on royal blue background.

As I normally do, I went with my usual selection of a straight cut to remove the cap of the Davidoff Royal Release Robusto. Once the cap was removed I moved on to the pre-light draw ritual. The cold draw was on the sweet side as I detected both sweet natural tobacco and sweet herbal notes. While there was a nice dose of sweetness, I didn’t find it to be overpowering. Overall I considered this to be an excellent pre-light raw. At this point I was ready to light up the Davidoff Royal Release Robust and see what the smoking phase would have in store.

The start to the Davidoff Royal Release Robusto delivered a mix of classic Davidoff notes – namely natural tobacco, herbal, and black pepper. The herbal and natural tobacco notes became the primary notes early on. Like the pre-light draw, both of these notes had an inherent sweetness to it. The black pepper notes became secondary notes on the tongue. At the same time, the black pepper was also the main note on the retro-hale, but it never got overly sharp.

As the Royal Release Robusto moved through the first third, the natural tobacco and herbal notes remained primary. Additional background notes of citrus, baker’s spice and toast surface during this phase joining the black pepper.

During the second third, the toast notes began to increase in intensity. Just past the midway point the toast notes joined the natural tobacco and herbal notes in the forefront. By this point the baker’s spice had diminished, but now the pepper mixed with some cedar spice was increasing. At the same time, there still was a touch of citrus in the background.

The final third of the Davidoff Royal Release Robusto saw increase in spice. This spice was a combination of black pepper and cedar notes. Along with some of the herbal notes, this spice was in the forefront. In the background I still picked up some notes of toast and citrus in the background. This is the way the way the Royal Release Robusto came to a close. The resulting nub was firm to the touch and cool in temperature.

The Davidoff Royal Release Robusto maintained a straight burn path from start to finish. From time to time, there was a slight amount of jaggedness on the burn line, but overall this was cosmetic and did not warrant any additional touch-ups. The resulting ash had a classic salt and pepper color. This was a tight and firm ash that came off the cigar in nice clean chunks. This was a cigar that had near perfect combustion – something I would expect from an ultra-premium cigar like the Royal Release. The burn rate and burn temperature were both ideal. 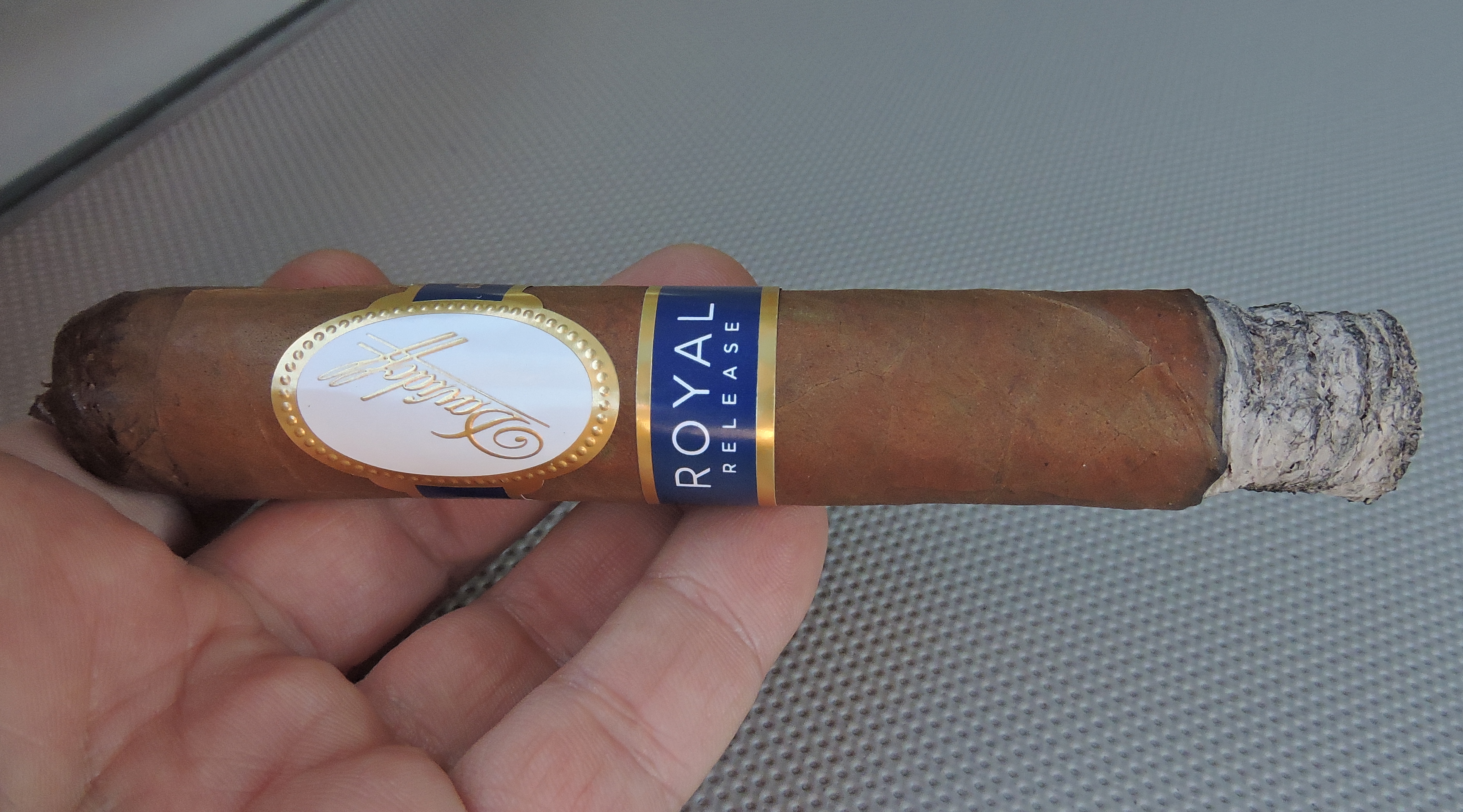 This cigar also had an ideal draw. Overall I found this draw to not be too tight, nor too loose. This was a very easy cigar to derive flavor from.

From a strength perspective, the Davidoff Royal Release Robusto seemed to fall into the range of what I have come to expect from those Davidoff cigars that adorn the white band. The strength level started out mild to medium. By the midway point, the strength level reached medium. There was a slight increase in strength in the second half, but it still stayed in the medium range. Meanwhile the body of this cigar was medium from start to finish.

As for strength versus body, I found the body had the edge throughout the smoking experience.

The Davidoff Royal Release Robusto was a textbook case for why on Cigar Coop we have an “Numerical Score” and “Assessment Rating”.  With the numerical score representing the overall performance of this cigar, the Royal Release Robusto comes through with flying colors – delivering one of the best cigars to ever come out of Davidoff and scoring a 94. It delivers great flavors, a nice amount of complexity, and has stellar construction. However, given an $80.00 suggested retail price, it throws a monkey wrench into the Assessment Rating which does factor cost in. In this scenario, given how great this cigar performed, it’s impossible not to recommend it. When you consider buying multiples, it becomes very difficult to make a recommendation given the price point.

One final note on the Assessment Ratings – I’m pretty much convinced when you get past the $40.00 mark of a cigar, it’s either “Try One” or “Oasis”. It’s very hard to recommend box purchases, box splits or fivers once you hit a price range like this cigar is in.

In terms of the value, it’s important to keep in mind that this cigar is targeted at the luxury market. When you position this cigar in the everyday market, it’s safe to say there are better values out there. At the same time, I’ll reiterate this is one of the best Davidoff cigars I have smoked. It’s one I’d easy recommend to any cigar smoker wanting to smoke a cigar that falls into this category.