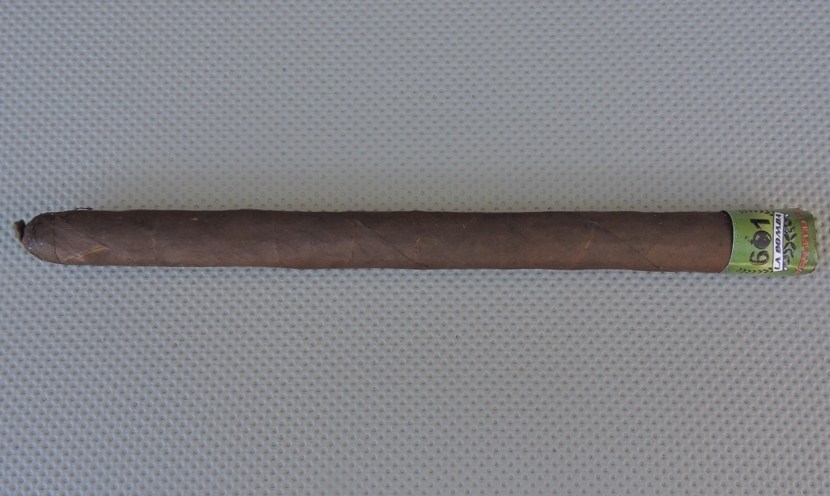 The 601 brand has its origins with EO Brands, the company that Erik Espinosa owned with Eddie Ortega. Back in 2011, the 601 La Bomba line was introduced. When EO Brands dissolved, Espinosa took the 601 lines into his new company, Espinosa Premium Cigars. From there he has expanded the 601 La Bomba line (as well as the 601 brand as whole) and added the Warhead line as a limited production off-shoot.

Without further ado, let’s take a closer look at the 601 La Bomba Warhead III and see what this cigar brings to the table.

The Warhead III uses the same blend components as the other installments of the 601 La Bomba Warhead series. As mentioned each blend is optimized for the size cigar.

The first Warhead Cigar was a 6 1/2 x 54 box-pressed Toro. In 2014, Espinosa Cigars released the Warhead II – a 5 1/2 x 56 box-pressed Robusto Grande. In 2015, the Warhead series took a one-year hiatus and this year returned with the box-pressed lancero format.

The lancero is a 7 1/2 x 38 vitola. It is the longest and thinnest vitola in the Warhead line. While box-pressed lanceros are not uncommon, seeing a 38 ring gauge box-press is something I would consider to be rare.

There have also been two additional Warhead cigars (Warhead IV and Warhead V) that have made a more limited appearance in the marketplace.

Consistent with its predecessors, the Warhead III is packaged in 10-count boxes. 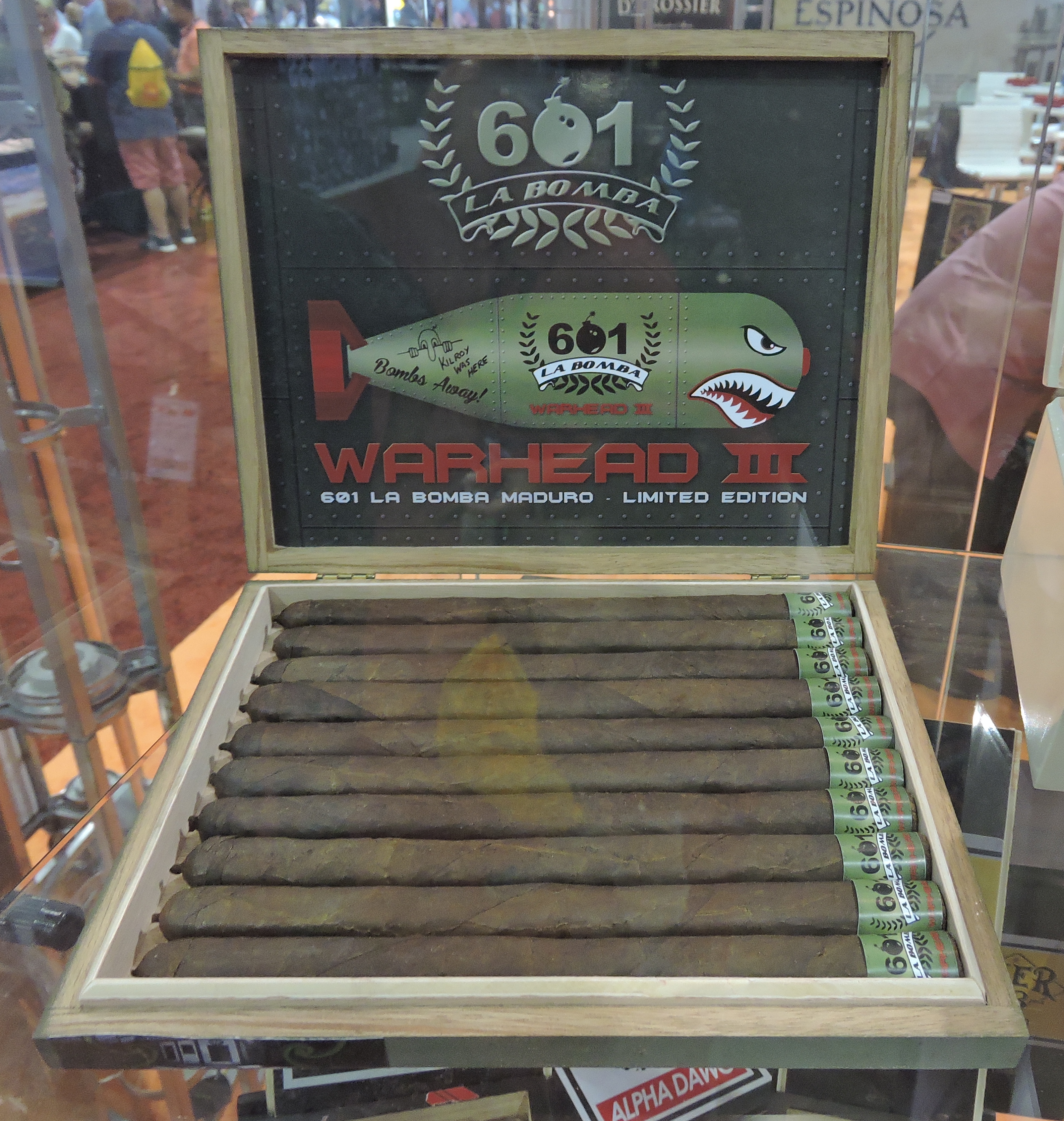 The Connecticut Broadleaf wrapper has a chocolate brown color to it. There is a light coating of oil on the surface. There are some visible wrapper seams and visible veins. I considered the surface of the wrapper to be slightly bumpy, but not toothy. The box-press itself was more of a soft Cuban-press type. One notable difference between Warhead III and its predecessors (as well as from the 601 La Bomba line) is that it has a shorter pig-tail as opposed to the longer “fuse-like” pig-tail attached to the cigar.

The Warhead III features a footer band. While each of the Warhead installments has had a similar band design, there have been differences in the color scheme. Like the other installments of the series, Warhead III still has the shark-face “bomb” design reminiscent of aircraft graffiti during the World War II era. Warhead III differs in that the background has an army-green design. On the background is the black 601 logo with a bomb design over the “0”. There is a black wreath design surrounding the left, right, and bottom of the logo. Across the lower part of the wreath is a white ribbon with the text “LA BOMBA” in black font. Below the wreath is the text “WARHEAD III” in red font.

As opposed to pulling the pig-tail off the cap of the Warhead III, I opted to make a straight cut. Once the cap was removed, I moved on to the pre-light draw. The dry draw started out with some earthy notes. As I progressed with the pre-light draw I got some maduro sweetness (natural tobacco plus some dried fruit) and a slight pepper bite. Overall I considered this to be a satisfactory pre-light draw. At this point, I slid off the footer band, lit up my Warhead III and awaited what the smoking phase would have in store.

By the last third, I found the pepper notes emerged as the primary flavor in the forefront. The cocoa and maduro sweetness were now secondary notes. There was more of an earthy component in the background now. This is the way the flavor profile came to a close. The resulting nub was slightly soft to the touch and cool in temperature.

In general, I found the Warhead III to have a low maintenance burn. The burn path remained relatively straight. Occasionally there was a little curvature on the burn line, but overall this was a cigar that did not require a lot of touch-ups. The resulting ash was tight and firm with a salt and pepper color. The burn rate and burn temperature were ideal. This might seem like a cigar that burns fast, but in reality, when you have a box-pressed 7 1/2 x 38 vitola, there is less tobacco area and thus it is going to deliver a shorter duration of smoking time (I averaged about 55 minutes for each smoke). 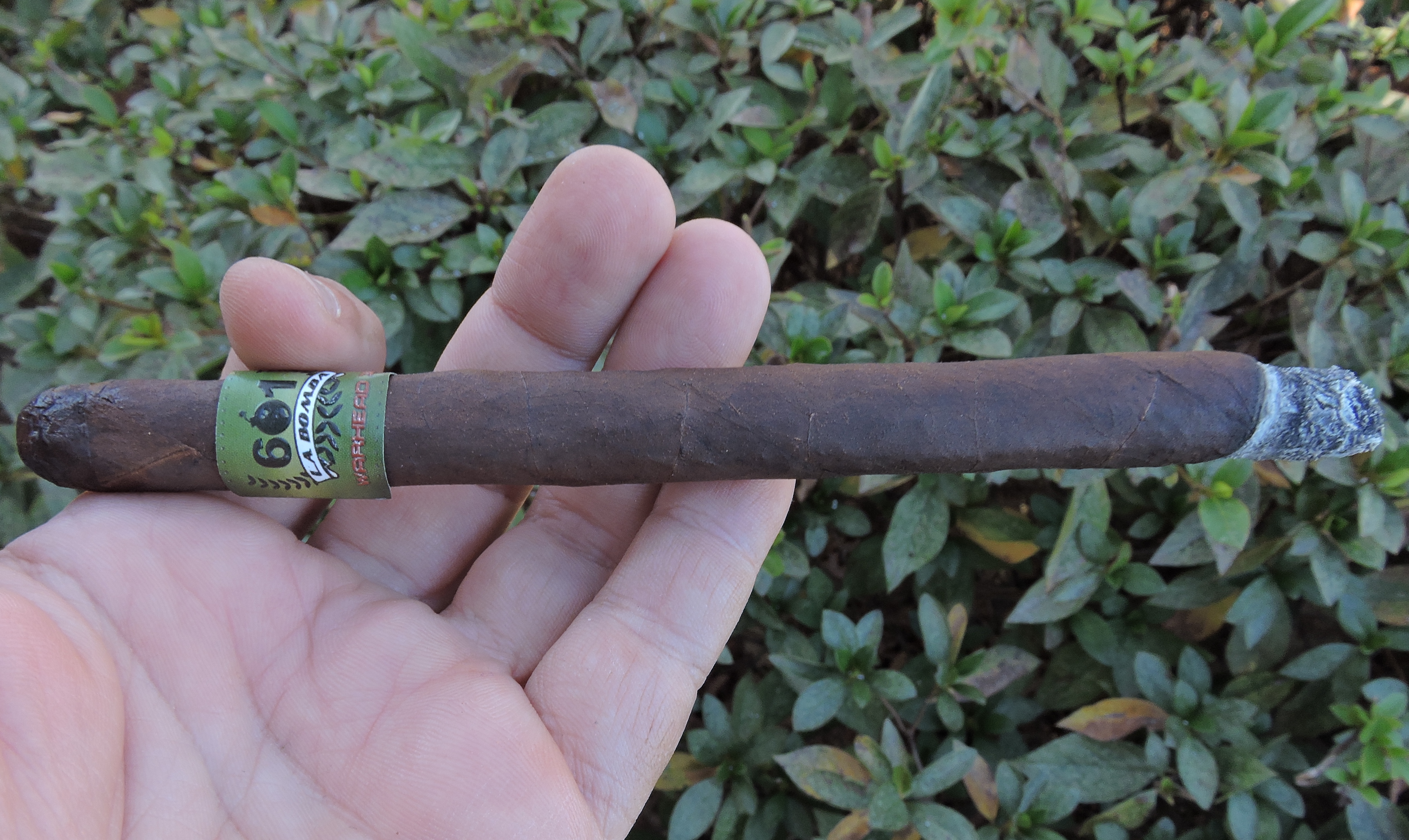 Burn of the 601 La Bomba Warhead III (Note: Footer Band was manually shifted to top by this reviewer)

The draw to the Warhead III performed quite well. The cigar had an open, but not a loose draw. For a thin ring gauge, this cigar produced plenty of smoke – something I very much enjoy on a Broadleaf.

Warhead III is a cigar that started out in the medium to full range in terms of strength and body. While this was not a “dialed back” cigar, I found this cigar had a little less intensity at the beginning than the previous two Warhead installments. Along the way, there was a gradual, linear increase of both attributes. By the second half, the Warhead III moved into full strength and full-bodied range where Warhead I and Warhead II fell. In general, the power of this cigar (from both strength and body) is really going to be felt when you retro-hale.

When it came to strength versus body for the Warhead III, I gave the edge to the strength. At the same time, this was a cigar where flavor was not sacrificed for strength.

Warhead III is an interesting smoke. It’s not the most complex smoke. The notes produced are pretty basic for a Connecticut Broadleaf cigar. However, everything with this cigar just seemed to come together perfectly. I loved the power and spice this cigar brought to the table. Warhead III is a cigar where the flavor is not sacrificed and the strength and spice does not assault the palate. The 38 ring gauge box-press format with a Connecticut Broadleaf was also something that I very much enjoyed.  This is still very much a cigar for the experienced, full-bodied cigar enthusiast. As for myself, this is not only a cigar I would smoke again, but its worthy of a fight with Chuck Norris.