Just prior to the 2014 IPCPR Trade Show in Las Vegas, Espinosa Cigars announced the 601 La Bomba Warhead II.  As the name indicates, this is the second release Warhead release, following 2013’s 601 La Bomba Warhead. The Warhead blend is an off-shoot of the 601 La Bomba line – a line of powerful Nicaraguan puros in the Espinosa portfolio.  The Warhead introduced a Connecticut Broadleaf maduro based off the original La Bomba in a box-pressed format. The original Warhead was a Cigar Coop favorite and finished as the #16 Cigar of the Year for 2013. The Warhead II introduces a new size and a tweaked blend. Espinosa has also announced the Warhead line will become an annual limited edition release.  Shortly after the 2014 IPCPR Trade Show, Espinosa shipped the Warhead II to retailers. Recently, I’ve had an opportunity to sample the Warhead II. I found this cigar to eclipse Espinosa’s work on the original Warhead – and the new frontmark and tweaked blend deliver a different overall experience.

Without further ado, let’s break down the 601 La Bomba Warhead II and see what this cigar brings to the table.

As indicated above, the Espinosa 601 La Bomba Warhead II is a tweaked version of the original Warhead.

For completeness, we list both vitolas in the Espinosa 601 La Bomba Warhead line. Both sizes are box-pressed. The Warhead II is packaged in boxes of 10 with a total of 2,000 boxes produced.

The Warhead II has a classic Connecticut Broadleaf roasted coffee bean color with some darker marbling. There is a light sheen of oil on the surface. There are some visible wrapper seams and visible veins. The Warhead II features the signature long tail found on the Warhead I and across the 601 La Bomba core line. This tail is actually attached against the side of the cigar as opposed to being loose.

The band to the Warhead II – consistent with the Warhead I and core 601 La Bomba line is a footer band. It features the shark face “bomb” shape reminiscent of nose art and aircraft graffiti during the World War II era. This is a similar shape and design to the Warhead I. As mentioned above, the Warhead II’s band design differs in that it features a camouflage design to it – featuring military gray in the color scheme. On the band is the black 601 logo with a bomb design over the “0”. There is a black wreath design surrounding the left, right, and bottom of the logo. Across the lower part of the wreath is a white ribbon with the text “LA BOMBA” in black font. Below the wreath is the text “WARHEAD II” in red font. 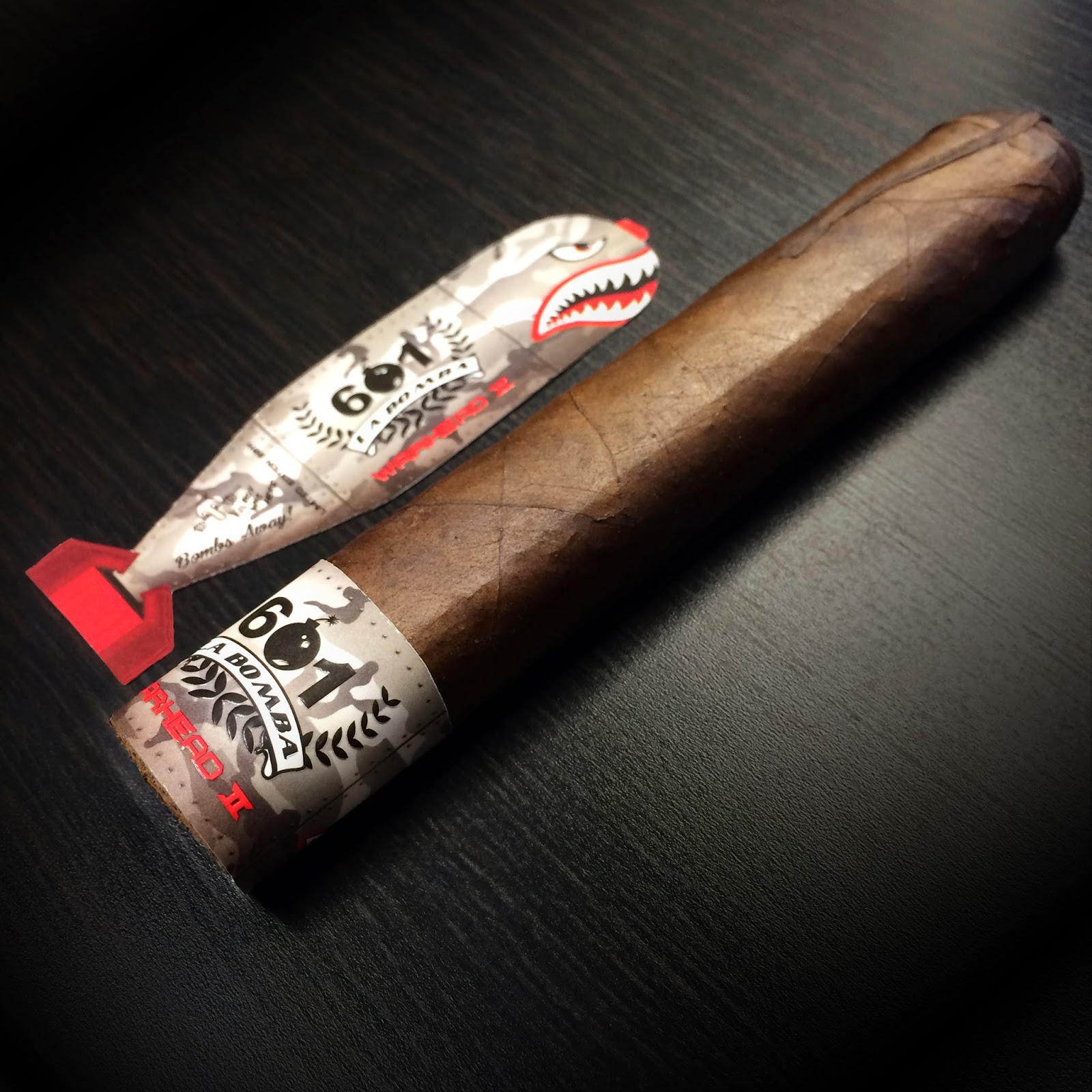 Prior to lighting up the 601 La Bomba Warhead II, I went with a straight cut to remove the cap.  I did not detach the pig-tail, so it remained attached to the side of the cigar throughout the smoking experience. I then proceeded to the pre-light draw.  The dry draw provided classic Connecticut Broadleaf maduro-style notes of earth, coffee, a cedar / floral combination, and some light spice. Overall, I considered this to be a good pre-light draw. At this point, I removed the footer band to the Warhead II, lit up the cigar, and awaited what the smoking phase would have in store.

After lighting up the Warhead II, the cigar provided notes of coffee, earth, and black pepper to start. The coffee notes got richer and somewhat sweeter becoming more of a mocha flavor.  The mocha flavor soon surfaced as the primary flavor. The earth notes were secondary. Meanwhile the black pepper was prominent on the after-draw and on the retro-hale.

A cream note surfaced on the first half.  This was a background flavor, but it gave the Warhead II a real smoothness to this cigar. Later in the first half, the mocha still was a primary flavor, but I also detected some coffee flavor on the after-draw and retro-hale – this helped smooth out these components which already had a good amount of spice.

In the second half, I found the pepper change up to more of a red pepper flavor which now joined the mocha in the forefront. I found the earth notes still secondary.  The after-draw and retro-hale no longer had the coffee notes smoothing out the spice. This is the way the cigar experience came to a close.  The resulting nub was soft to the touch and cool in temperature.

The burn and draw performed fantastic on the Warhead II.  I had no problems with the bigger ring gauge on this iteration of the Warhead. The burn line remained on the sharp side from start to finish. The resulting ash was a silvery / gray color and remained firm throughout the smoking experience. The burn rate and burn temperature were ideal.

The draw performed excellent as well. It was not too tight and not too loose. Overall, this was a very enjoyable cigar to smoke.

The 601 La Bomba line is known for its full strength, full-bodied smokes.  Last year’s Warhead fell into this category and the Warhead II is no exception. I’d pretty much put the Warhead II in about the same range of strength and body. When the Warhead II was announced, Espinosa Cigars mentioned part of the blend tweaks were to preserve the strength and flavor and I can see that. The strength and the body balance each other very nicely with neither attribute overshadowing the other.

I mentioned in the introduction that I felt the Warhead II eclipses the Warhead I.  The Warhead II keeps to the flavor profile of the Warhead I, but with one big difference – it delivers a much smoother cigar experience. 2014 is proving to be a very strong year for excellent maduro releases and the Warhead II is among the best of them. Given this is still a full strength, full-bodied smoke, this is one I would only recommend to an experienced cigar enthusiast who prefers a smoke of this profile. As for myself, this is a box worthy cigar. It’s certainly one I look forward to smoking again.

* The cigars for this assessment were provided to Cigar Coop by Espinosa. Cigar Coop is appreciative for the sample, but this does not influence this review