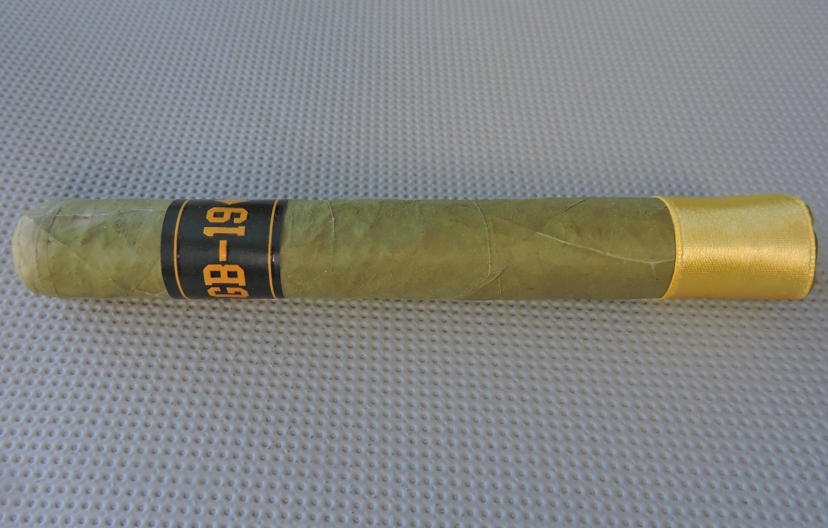 At the 2016 IPCPR Trade Show, Fred Rewey and Nomad Cigar Company launched a new blend known as the Nomad GB-19. The cigar marks Rewey’s first foray into producing a candela wrapped blend. The name GB-19 pays homage to Rewey’s favorite football team, the Green Bay Packers. Rewey who is known to to use numbers in his cigar names selected the “19” because it was in 1919 when the Packers franchise was founded. To produce his candela, Rewey once again is teaming up with James Brown’s Fabrica Oveja Negra factory – who also worked with him to produce the Nomad Martial Law. Recently, I’ve had an opportunity to smoke the Nomad GB-19. Overall, as we will see, this is a very different candela. At the same time it delivers a cigar that is fun to smoke.

Shortly after the IPCPR Trade Show, the Nomad GB-19 originally was released as regional release to the State of Wisconsin (that also happens to be Rewey’s home state).  This past September, Rewey took the Nomad GB-19 national.

Without further ado, let’s break down the Nomad GB-19 and see what this cigar brings to the table.

In addition to the candela wrapper, the Nomad GB-19 uses an all Nicaraguan blend. 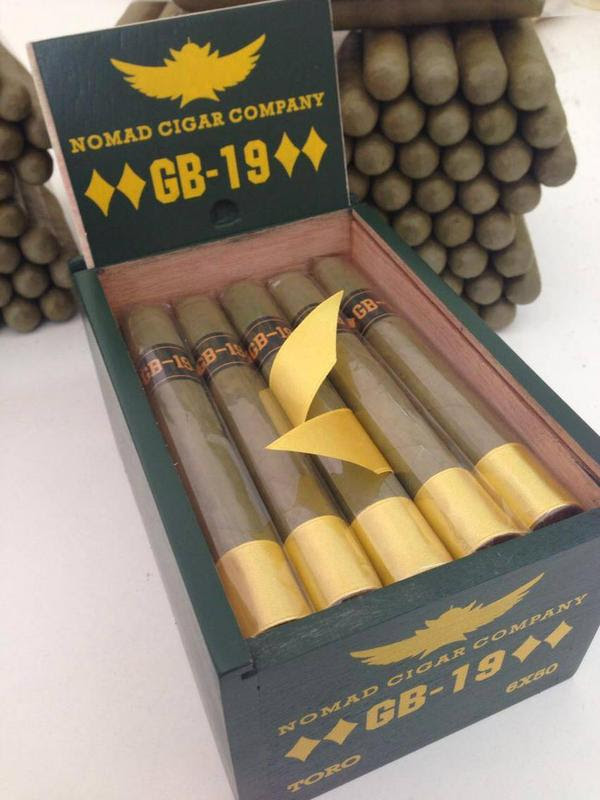 The candela wrapper of the Nomad GB-19 didn’t quite have a “Kermit the Frog” green color, but it still had rich olive green color. There was a nice coat of oil on this wrapper. There are some visible veins and most of the wrapper seams are on the thin side. The surface of the wrapper is on the bumpy side.

The band to the Nomad GB-19 is black with gold font. Prominently on the center of the band is the text “GB-19”. There are two diamonds on each side of the text. To the far right is a small Nomad wing logo with the text “NOMAD CIGAR CO” just below that. Toward the far lower right side is Rewey’s Twitter handle @GODFADR (Rewey takes pride in being the first cigar company to have a Twitter handle on the front of the band). Toward the top and bottom of the band is a gold pinstripe.

The footer of the cigar is finished with a yellow ribbon.

As I normally do, I went with my usual choice of a straight cut to remove the cap of the Nomad GB-19. Once the cap was clipped, I proceeded with the pre-light draw. The pre-light draw delivered a mix of classic candela grass notes, cream, and a slight citrus sweetness. Overall I considered this to be a satisfactory pre-light draw. At this point I removed the ribbon of the GB-19, lit up the cigar and awaited what the smoking phase would have in store.

The Nomad GB-19 picked up where the pre-light draw left off as I detected notes of grass, cream, and citrus sweetness. At the same time, I picked up a slight black pepper note on the tongue in the background. Meanwhile the retro-hale produced an herbal grass note.

As the Nomad GB-19 moved through the first third, the cream and grass notes emerged as the primary flavors. During this stage of the smoke, both of these notes alternated in levels of intensity. At the same time, the citrus note became a close secondary note with the black pepper further back.

During the second third, the cream and grass notes continued to alternate in intensity. In the background, I now found that black pepper and citrus notes also alternated in intensity.

As the Nomad GB-19 entered the last third, I found the black pepper notes joined the grass flavors in the forefront. The cream notes receded into the background and the citrus notes became more distant. This is the way the cigar experience of the Nomad GB-19 finished up. The resulting nub was slight soft to the touch, but cool in temperature.

In my experience with Nomad products and brands coming out of Fabrica Oveja Negra, the have scored quite high when it comes to the burn. The GB-19 wasn’t quite at the level of what I’ve seen in the past. It’s not that it scores poorly, it’s just up against some high competition. The burn line was somewhat irregular throughout the smoking experience. While touch-ups remedied the burn, I found this was a cigar that needed a more frequent amount of them. The resulting ash was a salt and pepper color. It was not a tight ash, but it wasn’t loose or flaky either. Meanwhile the burn rate and burn temperature were ideal. 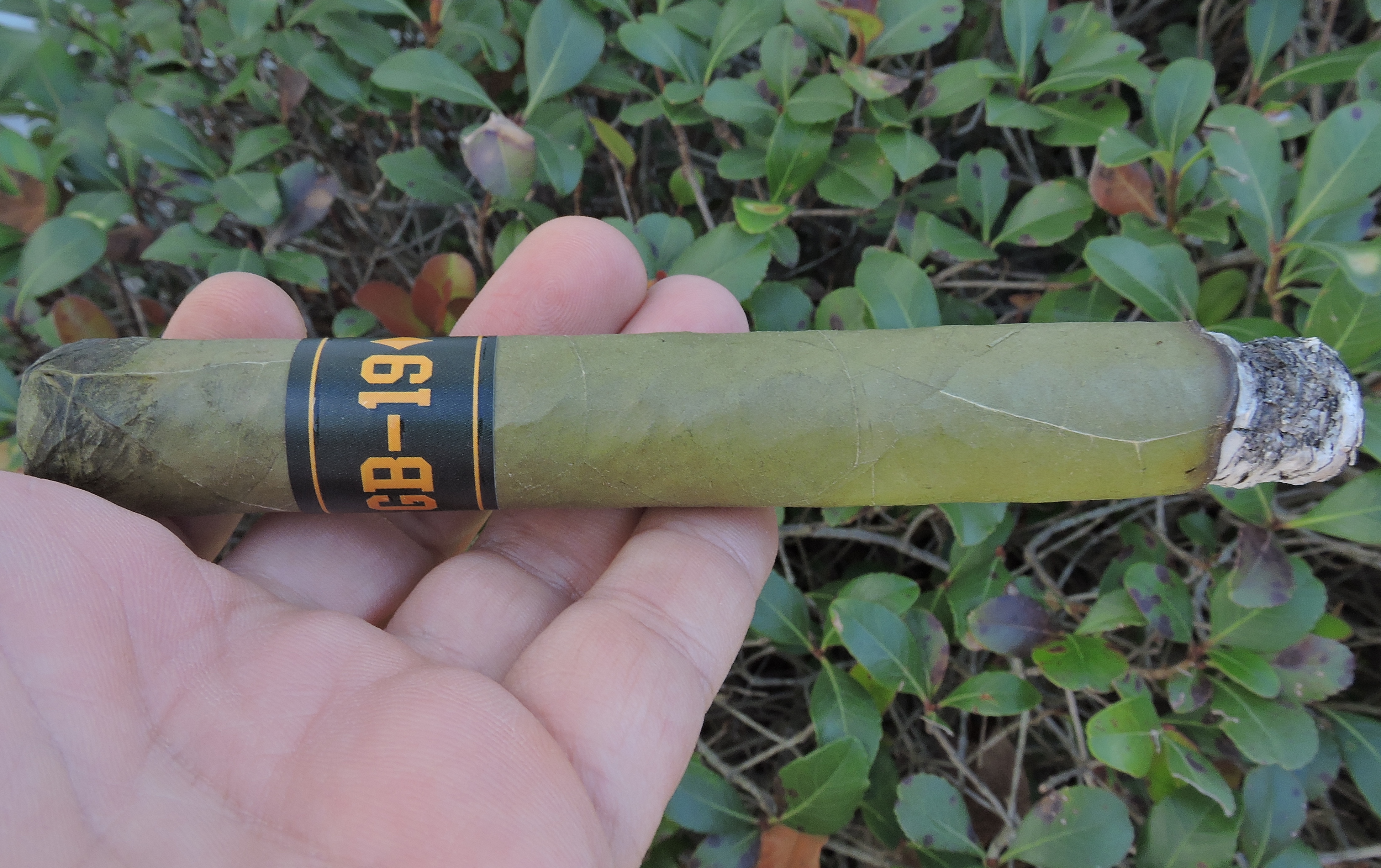 As for the draw, it scored quite well. This cigar seemed to have the right amount of resistance to it throughout the smoking experience.

The strength level was another story as this  The GB-19 surprised me with how much strength it produced for a candela. Right out of the gate, this cigar was medium strength – which already seemed to have more strength than most candelas I’ve smoked. As I smoked the GB-19, the strength level grew. It progressed to medium to full in the second half  – and it continued to increase. Toward the last third, this cigar was very close to full strength. Without a doubt, this had one of the highest strength of any candela I had smoked.

In terms of strength versus body, the strength had the edge here from start to finish.

2016 saw La Zona produce two candelas – the uncandela-like candela Pickle Juice for MoyaRuiz Cigars and the spicy candela, the Espinosa Wasabi. Certainly when candelas are talked about for the year 2016, the Nomad GB-19 has to be talked about. In terms of flavor it still has many traditional candela flavors, but in terms of its strength – it certainly is untraditional. Yes, this cigar did require a little more tlc in terms of maintaining the burn, it still is a cigar that delivered some very nice flavor.

I am curious to see how this cigar responds to age and whether the strength level comes down. Overall, it’s a candela I’d probably recommend to a more seasoned cigar enthusiast. As for myself, it’s a cigar I’d smoke again – and its one certainly worthy of a box split.