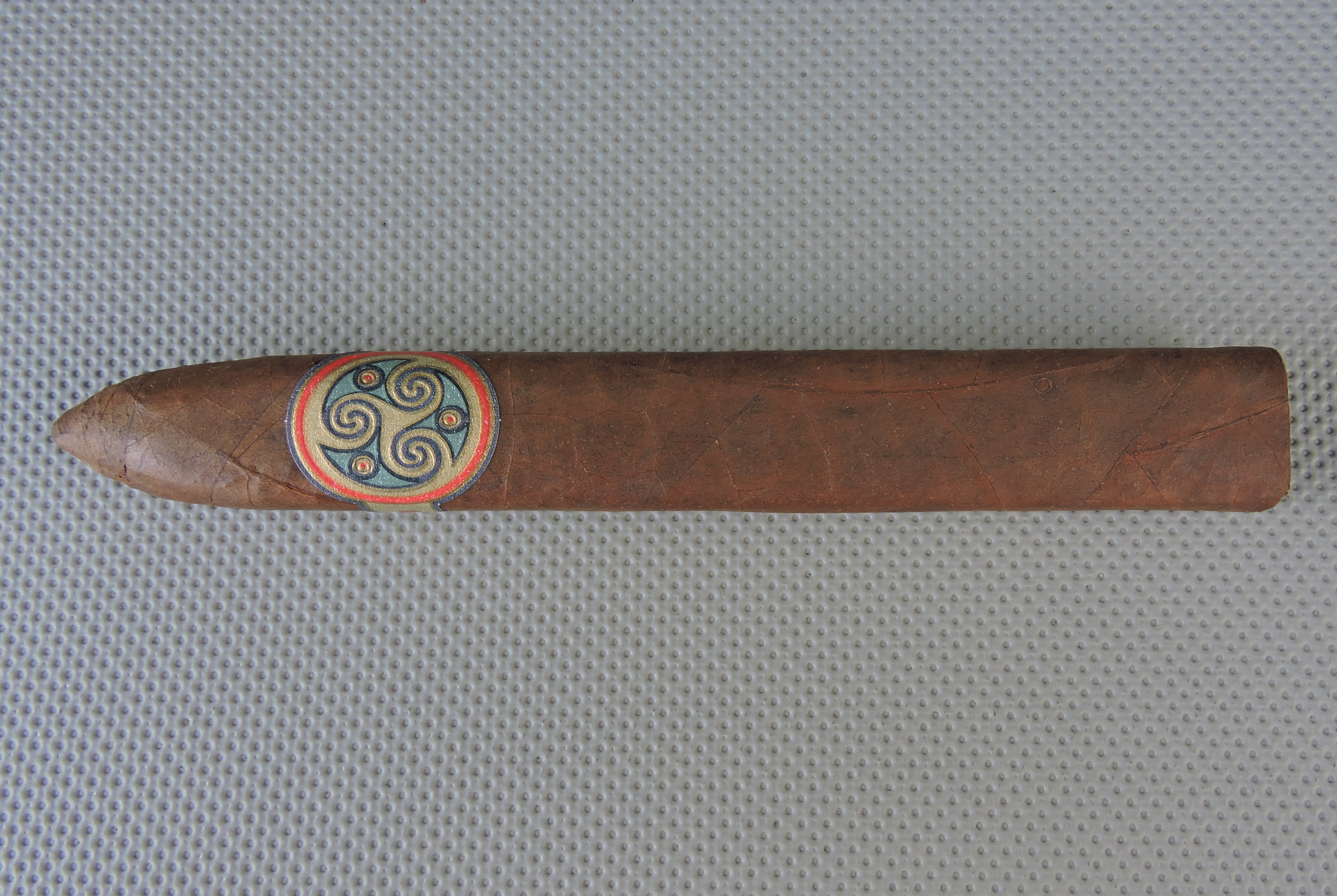 In 2016, Bombay Tobak, the company best known for its MBombay line introduced a new brand in its portfolio known as Gaaja. Gaaja was a project that Bombay Tobak owner Mel Shah had been working on for about three years. Not only would it be the compamy’s first box-pressed offering, but its blend would incorporate tobacco from Paraguay – a country not known for producing premium cigar tobaccos. The Gaaja would make its debut prior to the IPCPR Trade Show and would prove to be a huge hit for Shah and Bombay Tobak. In fact, it would finish as the #5 Cigar Coop Cigar of the Year for 2016. Fast forward to the IPCPR Trade Show and a new blend was showcased under the Gaaja brand known as the Gaaja Maduro. As the name indicates this cigar offers a maduro version of the Gaaja blend. Recently I’ve had an opportunity to smoke the Gaaja Maduro in the Torpedo size. The Gaaja Maduro lives up to the high level set up the original Gaaja as this cigar is a home run for Bombay Tobak.

Gaaja (pronounced : Gaa-ya) is a name that traces back to the Sanskrit name “Gaja” (pronounced guy) which means elephant. As mentioned Gaaja was a project that worked on for three years and the connection with the name elephant represents the slower and patient pace by which Shah brought this brand to market.

Without further ado, let’s break down the Gaaja Maduro Torpedo and see what this cigar brings to the table.

The Gaaja Maduro is a five country multi-national blend. The wrapper used is a Brazilian Mata Fina wrapper. According to Shah, this wrapper has played a very important factor in the flavor, complexity and the body to the cigar. While the Gaaja Maduro uses the same binder and filler as the original Gaaja, the proportions were adjusted to accommodate the new wrapper.

As with the Gaaja Maduro, the Torpedo size is also the Gaaja Natural line.

The Brazilian Mata Fina wrapper of the Gaaja Maduro Torpedo has medium roast coffee bean color. Depending on how the light shines on it, it may exhibit a colorado red tint. The surface of the wrapper has some subtle marbling to it. There is also a coating of oil on the surface. This was a smooth wrapper that was mostly void of veins and only had some very thin visible wrapper seams. The box-press of the Gaaja Maduro Torpedo is firm. The torpedo tip is short with moderate tapering.

The band on the Gaaja Maduro is the same that is found on the Gaaja Natural. This band was designed by Shah’s wife (who designed the other MBombay bands). With the Gaaja band, it is a departure from the Indian mosaic style band found on the MBombay lines. The band features colors to represent the four elements: Red (Fire), Gold (Earth), Green/Blue (Water), Dark Blue Swirls (Wind). The left and right side of the band is gold with blue trim. On the left side of the band is the text “Bombay Tobak” in red cursive font. The right side has the text GAAJA: in red print font.

As I do with torpedoes, I went with a straight cut to remove the tip of the Gaaja Maduro Torpedo. For this cigar, I used my Credo Special T cutter with the 36 ring gauge hole to get an ideal cut. This allowed me to get a smaller ring gauge cut an to take advantage of the tapering of this cigar. After clipping the tip, I commenced with the pre-light draw. The dry draw delivered a mix of mocha (what I consider to be a combination of chocolate and coffee components) and citrus. Overall I considered this to be a satisfactory pre-light draw. At this point I was ready to light up the Gaaja Maduro Torpedo and see what the smoking phase would have in store.

The Gaaja Maduro Torpedo started out with notes of mocha, cedar, herbal spice, and white pepper. It didn’t take long for the mocha notes to move into the forefront.  As the Gaaja Maduro Torpedo moved through the first third, the chocolate component of the mocha was the main flavor. This chocolate component had a smooth and creamy texture to it. Meanwhile the cedar, herbal, and white pepper notes in the background provided some nice balance against the chocolate. At the same time, there was a combination of cedar and herbal notes on the retro-hale.

Toward the latter part of the second third, the coffee flavor became the main component of the mocha notes in the forefront.  While the pepper continued to increase, I now also noticed an increase in cedar. From time to time, there was a slight citrus sweet note that surfaced. The herbal notes remained more distant.

By the last third of the Gaaja Maduro Torpedo the cedar and pepper notes joined the coffee notes in the forefront. I didn’t find much in the way of chocolate notes left. There was still a touch of citrus and herb in the background. This is the way the cigar experience came to a close. The resulting nub was firm to the touch and cool in temperature.

In terms of burn, the Gaaja Maduro Torpedo, I did find was a slight amount of meandering from time to time and this did require a few more touch-ups than I prefer. At times there was a slight amount of jaggedness on the burn line. The resulting ash had a silver-gray color with some dark spots. This ash wasn’t overly firm, but at the same time this was not a loose flakey ash either. The burn rate and burn temperature were ideal. 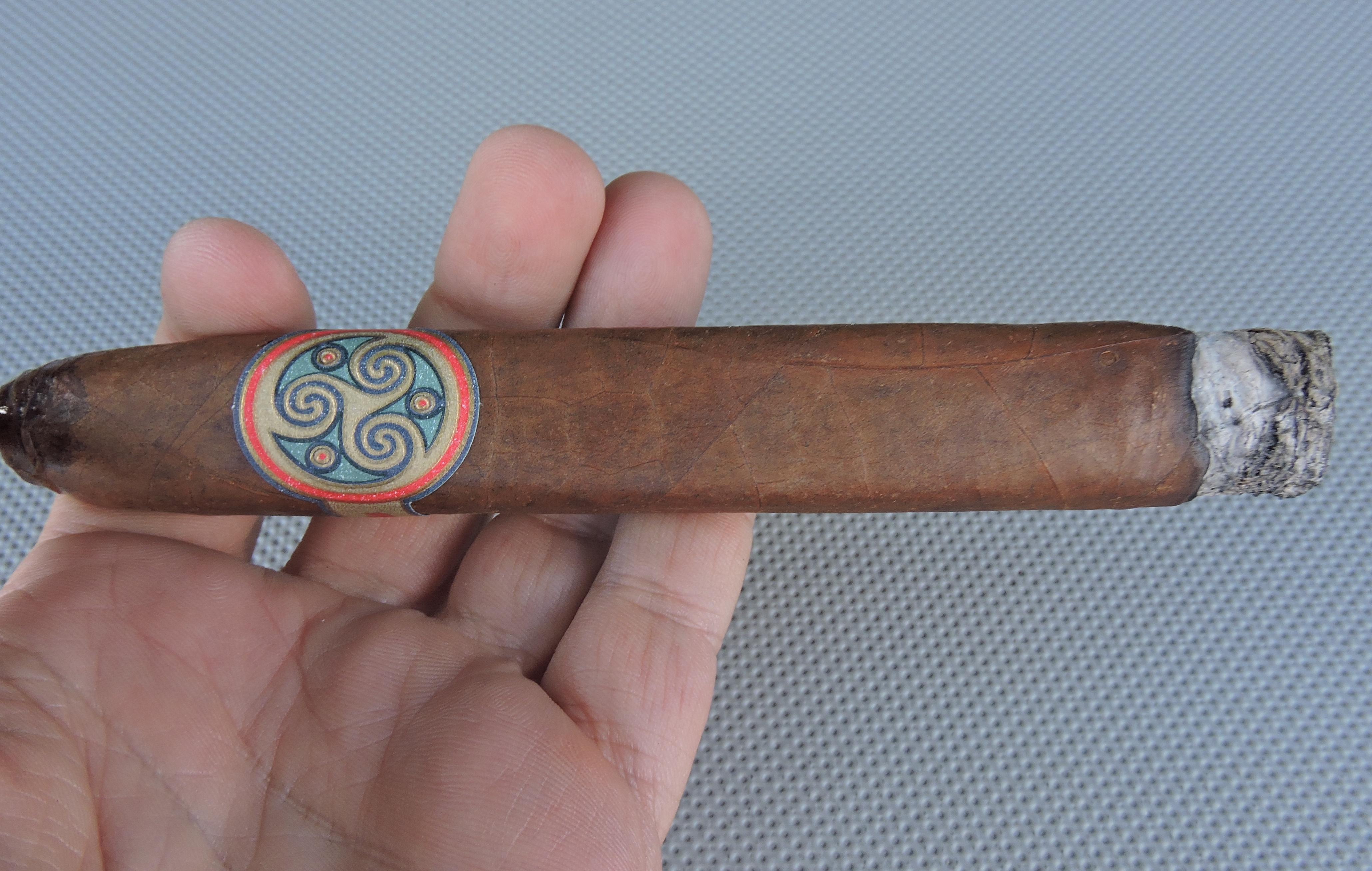 Burn of the Gaaja Maduro Torpedo

I found the draw for this box-press to also perform very well. This box-press had the right amount of resistance. I didn’t find the draw to be “too open” and this resulted in a low maintenance cigar to derive flavors from.

When Shah released Gaaja Natural last year, he knocked it out of the ballpark. Now with the Gaaja Maduro, Shah hits another home run. Given Gaaja Natural was such an outstanding cigar, I was a little skeptical of what changing the Natural’s Ecuadorian Desflorado wrapper to a Brazilian Mata Fina would do. The end result is it created another stellar cigar and a great complement to the original Gaaja. Flavor-wise, this is one of the finest Brazilian Mata Fina box-pressed cigars I have smoked.

In terms of the Paraguayan tobacco in the blend, I felt it played less of a role with this blend. I’ll infer the Brazilian Mata Fina wrapper had a stronger presence on the Maduro than the Desflorado wrapper had on the Natural. Still it’s not a negative here – and if the original Gaaja Natural wasn’t in  your wheelhouse, I’d still encourage you to try the maduro.