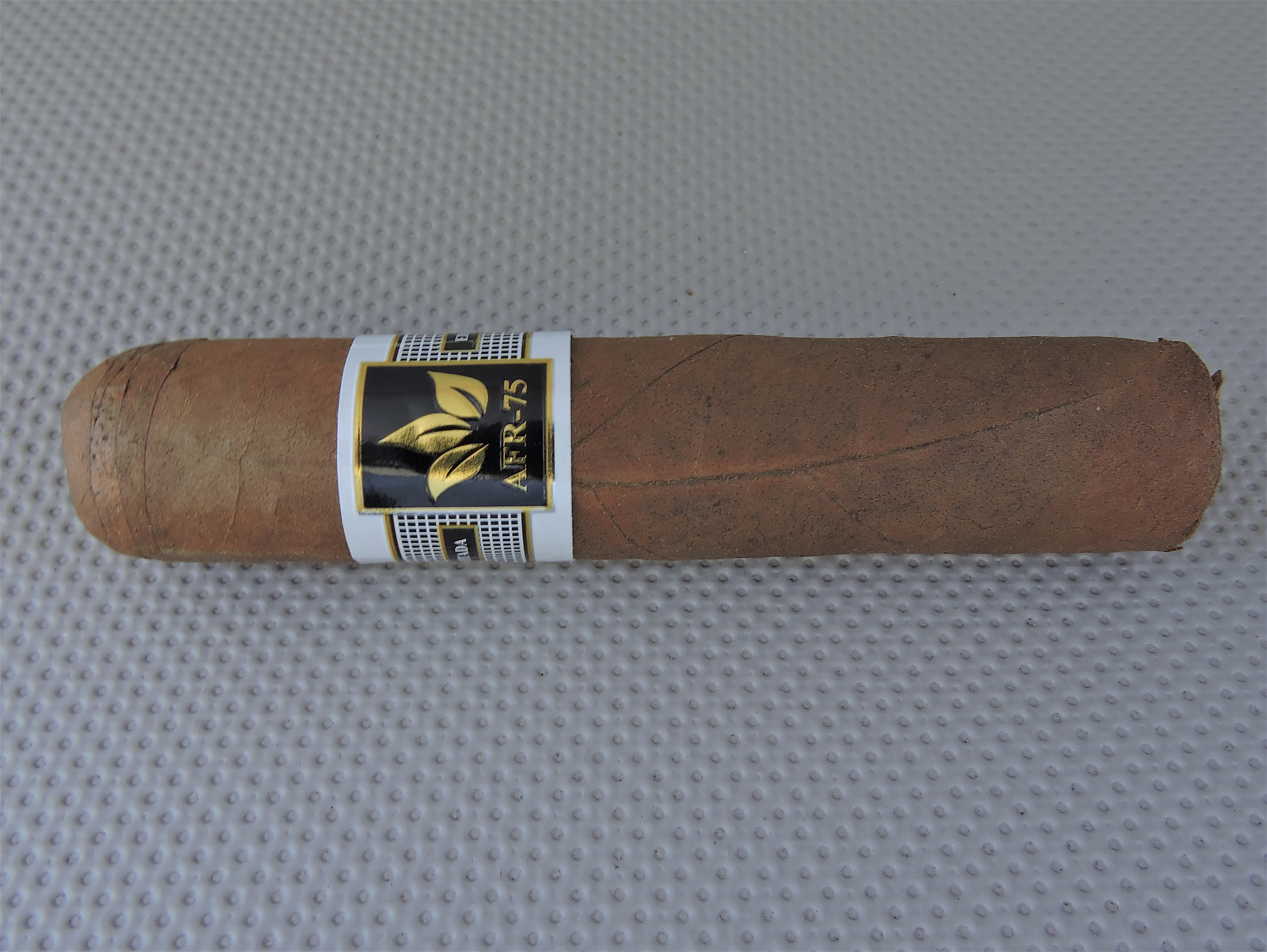 At the 2016 IPCPR Trade Show, PDR Cigars showcased a new extension to its AFR-75 line known as the AFR-75 Claro. The AFR-75 line made its debut back in 2013 as a premium offering in the PDR Cigars portfolio. That first offering features a blend highlighted by a San Andres Maduro wrapper. With the AFR-75 Claro, PDR Cigars master blender Abe Flores brings back the same blend found on that maduro offering, but using a lighter San Andres wrapper (i.e. Claro) wrapper. Recently I’ve had an opportunity to smoke the AFR-75 Claro in the Catador (4 x 54) size. Overall, I found this to be a very different cigar than the Maduro blend, but one that was still quite satisfying.

The AFR-75 derives its name from the initials from Flores’ full name – Abraham Flores Rosario as well as his year of birth (1975). 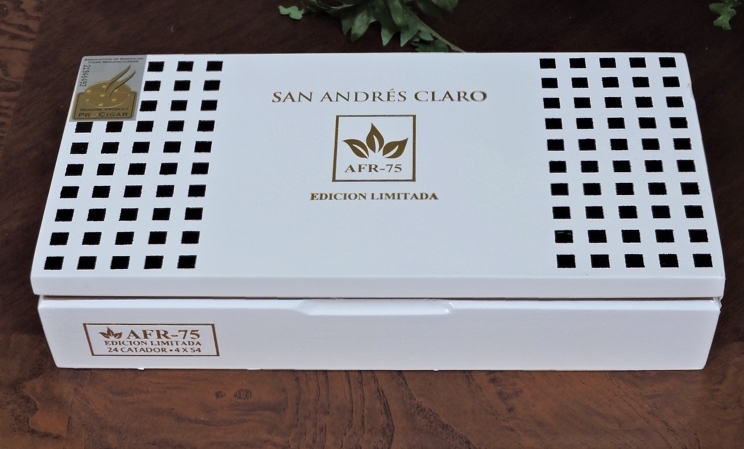 Without further ado, lets take a closer look at the AFR-75 Claro Catador and see what this cigar brings to the table.

As mentioned, the AFR-75 Claro blend has similar tobacco components in the blend with the main difference being the lighter wrapper 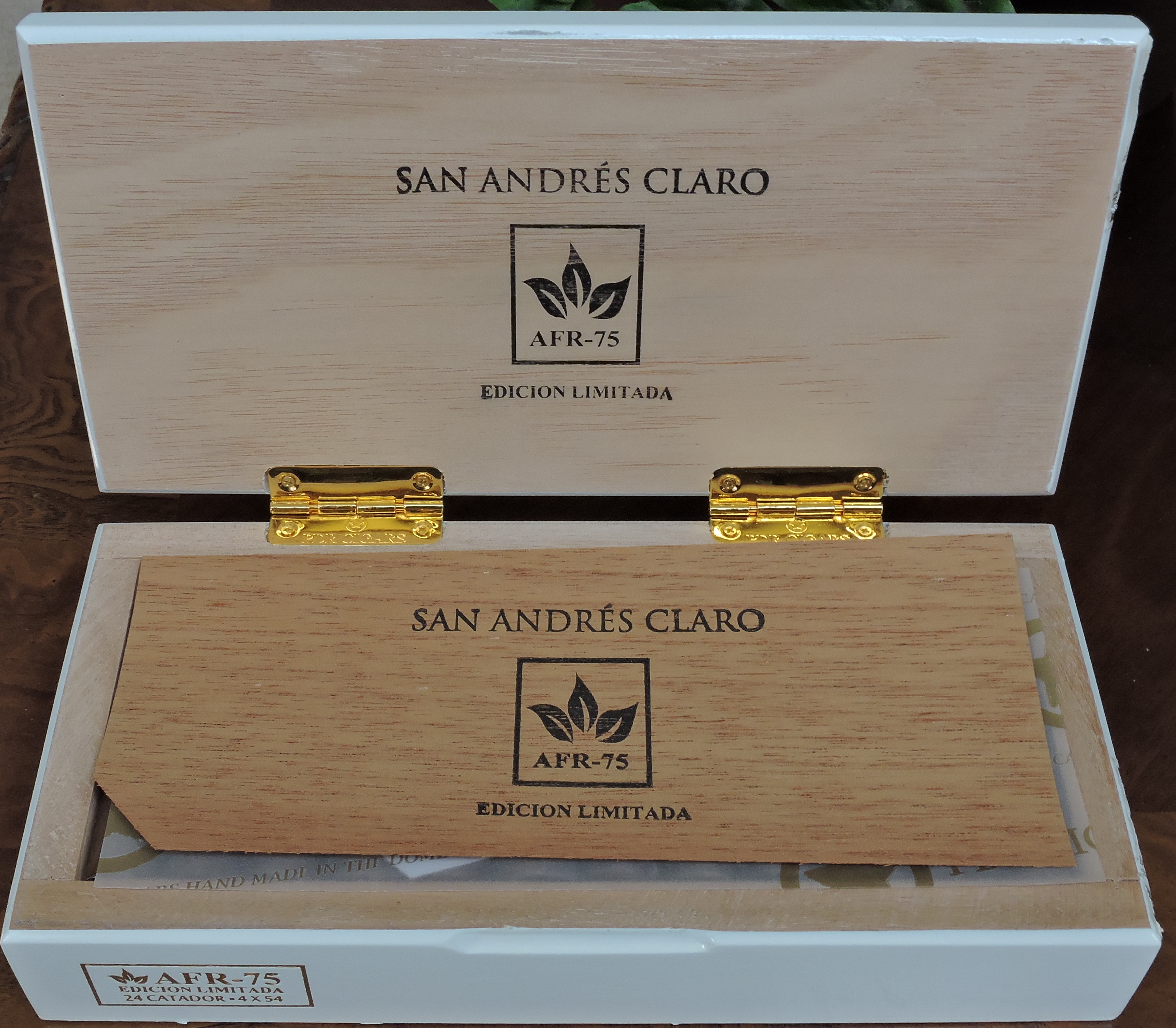 The AFR-74 Claro is being launched in the same four sizes as the AFR-75 Maduro. The Catador size was something that was not originally offered in the Maduro line, but was also introduced at the 2016 trade show. The AFR-75 line is skewered toward larger ring gauges with the Catador coming in the smallest at a 54.

Each of the four sizes are packaged in 24 count boxes. 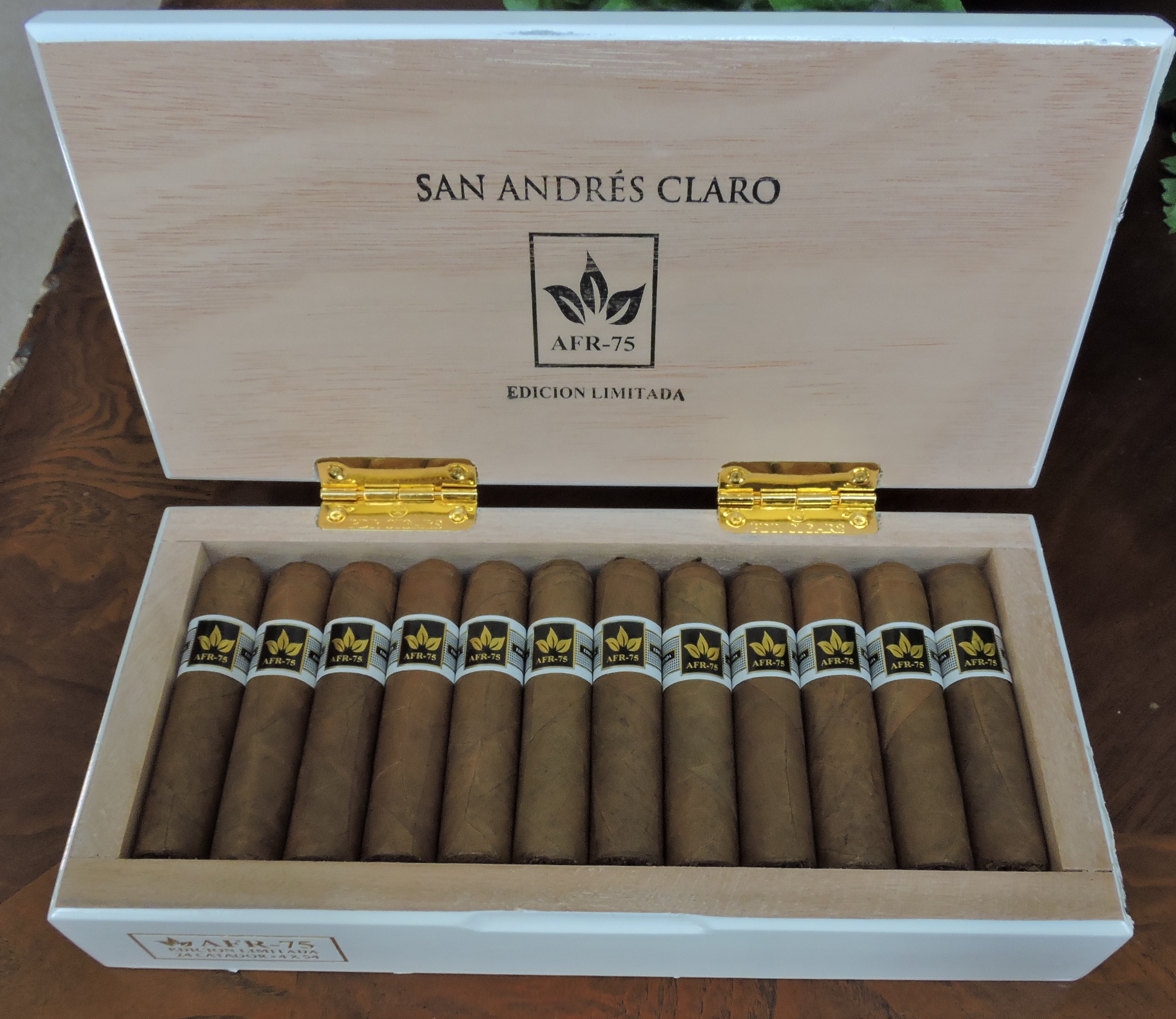 The band is definitely PDR Cigars’ most elegant one to date.  The band has a white background. On the center of the band is a black square.  There is a good leaf resting on the square. Below the leaf  image is text “AFR-75” in gold font.  Surrounding the black square to the left and right is a grid-like pattern of small black squares. On that grid pattern (on both the left and right side of the band) is a black stripe with gold trim. Each stripe has the text “EDICION LIMITADA” in white font. On the far right of the ban is a black PDR CIGARS star logo in black surrounded by black circular trim. To the right of that, arranged in landscape mode is the text “PDR CIGARS” in black font. 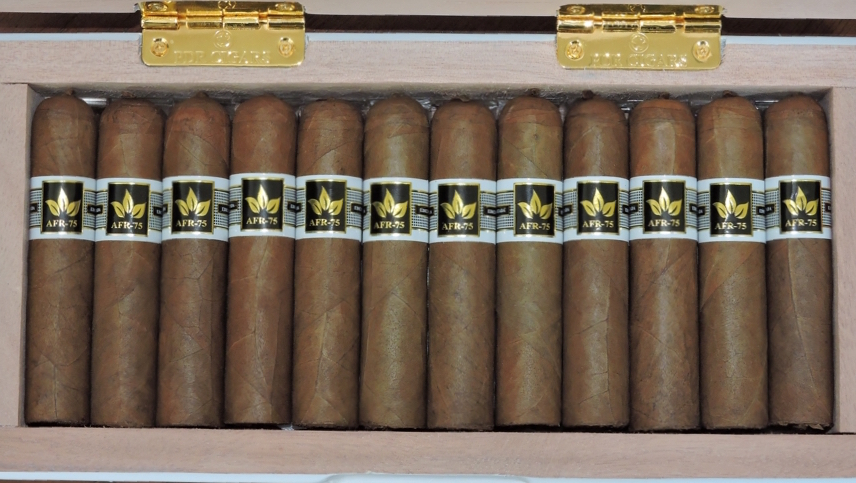 Close Up of the AFR-75 Claro Catador

Out of the gate, the AFR-75 Claro Catador delivered a mix of cream, natural tobacco, wood, and cedar. The natural tobacco had an inherent sweetness with a touch of mixed fruit flavor in there. Early on the cedar notes receded into the background. The natural tobacco and wood notes alternated in intensity in the forefront, but the cream remained a constant. Meanwhile the retro-hale produced an additional layer of cedar in there.

Buy the midway point, the natural tobacco notes lost a bit of its sweetness (it started to shed its the fruit quality), but remained in the forefront with the wood. The creaminess also started to diminish into the background while the cedar notes inched toward the forefront. I also detected a little more in the way of red pepper on the tongue.

The last third of the AFR-75 Claro Catador saw the cedar notes join the wood in the forefront. In the background I also picked up some natural tobacco notes with the red pepper. By this point, the creaminess exhibited on this cigar had subsided. This is the way the cigar experience of the AFR-75 Catador Claro came to a close. The resulting nub was as cool in temperature and firm to the touch.

The burn of the AFR-75 Claro Catador performed quite well. There was a slight amount of waviness on the burn line, but this didn’t warrant any excessive touch-ups. At the same time the cigar was never in danger of tunneling or canoeing. The resulting ash was tight and firm with a near white color to it. The burn rate and burn temperature were both ideal. 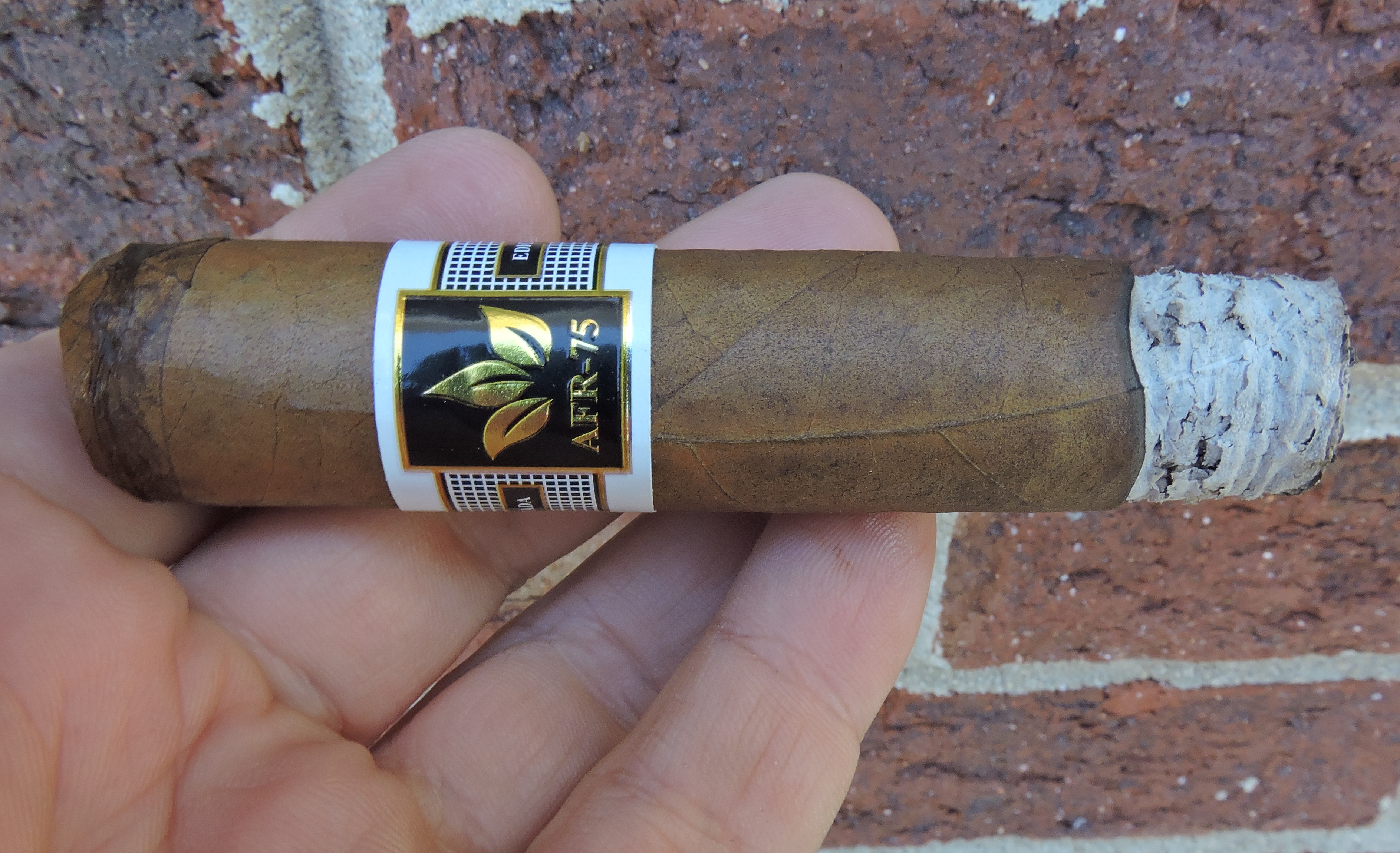 Burn of the AFR-75 Claro Catador

The draw of the AFR-75 Claro Catador also scored well. It had a touch of resistance to it – which is something I like. There was also a decent amount of smoke production from this cigar. Overall, this made the cigar an enjoyable one to smoke.

In terms of strength versus body with the AFR-75 Claro Catador, I gave the edge to the body throughout the smoking experience.

The AFR-75 Claro Catador is one of those cigars that is a case study for how a wrapper can change this cigar – and in this case it essentially is a lighter wrapper that has resulting from the processing stage. Flavor-wise, this was a different cigar than its AFR-75 Maduro counterpart. The Claro is going to deliver less in the way of the bold espresso / coffee / chocolate notes that were found on the Maduro and more in the way of creamy sweet natural tobacco. One thing that did surprise me is that I was expecting a much milder cigar than the bolder AFR-75 Maduro. Instead I still got something that was in the medium / medium plus range. While overall I still give a slight edge to the Maduro, this is still a very good cigar. For a small cigar, it’s a little pricy at around $13.75, but one that performs quite well.  It’s one I would recommend to a novice or experienced cigar enthusiast – and its one worthy of a box split.