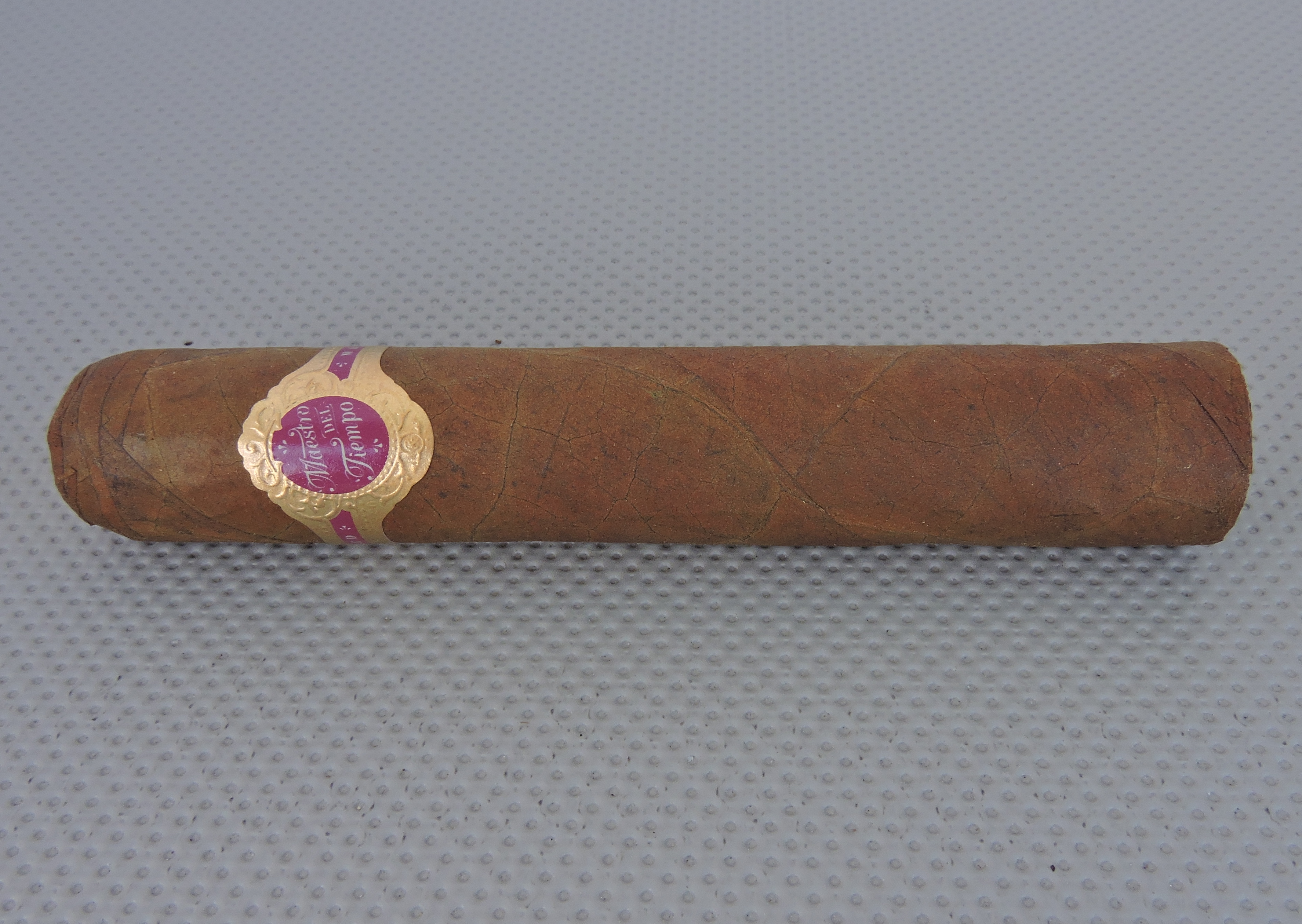 In 2016, Warped Cigars launched a new line known as Maestro Del Tiempo (meaning Master of Time). Warped Cigars is owned by Kyle Gellis and over the past three years is a company that has experienced incredible growth. For production of his cigars, Gellis has partnered with the El Titan de Bronze factory in Miami, Florida, and Casa Fernandez’s TABSA factory in Nicaragua. With Maestro Del Tiempo this is one of the brands that come out of TABSA. Warped has certainly captured the attention of many cigar enthusiasts. With Maestro Del Tiempo; this is a cigar that certainly has continued to thrust the company’s momentum forward as it has been very well received in the market. Recently I have had an opportunity to smoke the Maestro Del Tiempo in the 5712 (Petite Gran Robusto) size. Overall I found this cigar to live up to expectations as this is an excellent cigar.

Gellis has built his portfolio of offerings in a way that is a bit unconventional these days. He has focused a lot on classic Cuban vitola sizes. As such, most of Warped’s portfolio is under a 50 ring gauge. The 5712 size is one of two 52 ring gauge sizes in Warped’s offerings – with the La Hacienda Gran Robusto.

The Maestro Del Tiempo is available in three sizes. The 6102R is a limited production offering that features a slightly different blend that incorporates medio tiempo tobacco. Medio tiempo one of the highest priming leafs that only grows on a small percentage of tobacco plants. Being medio tiempo is a high priming leaf, it is a leaf that gets the most sunlight and nutrients, so it tends to produce a fuller strength, fuller-bodied cigar.  Given this grows on a small percentage, this leads to a limited production of the 6102R.

The Corojo 99 wrapper of the Warped Maestro Del Tiempo 5712 had a medium brown wrapper with a cinnamon colored tint to it. There was a light coating of oil on the surface of the wrapper. Overall this was a smooth wrapper with only some thin visible veins and wrapper seams that are well hidden.

As I normally do, I went with my usual choice of a straight cut to remove the cap of the Maestro Del Tiempo 5712. After the cap was clipped, I proceeded with the pre-light draw. The dry draw delivered a mix of natural tobacco sweetness, cedar, and a touch of white pepper. Overall I considered this to be an excellent pre-light draw. At this point I was ready to light up the Maestro Del Tiempo 5712 and await what the smoking stage would have in store.

The Warped Maestro Del Tiempo 5712 started with a short blast of white pepper. The pepper quickly subsided and notes of natural tobacco, cedar, and generic wood. Early in the first third, the natural tobacco moved to the forefront while the other notes were grounded in the background. During this stage, the natural tobacco was was what I term a “compound note” – exhibiting both fruit and sweet cashew qualities. Meanwhile the retro-hale delivered an additional layer of cedar and some red pepper.

Toward the start of the second third, the cedar notes made their way into the forefront joining the natural tobacco in the forefront. The generic wood and white pepper remained in the background, but the white pepper started lingering more on the tongue.

By the midway point of the Maestro Del Tiempo 5712, some of the cashew and fruit qualities slowly diminished from the natural tobacco. The cedar notes all remained in the forefront. Some earthy notes also emerged as a primary flavor. Meanwhile the pepper notes started to pick up in intensity.

The last third of the Maestro Del Tiempo 5712 saw the cedar and pepper notes in the forefront. The natural tobacco sweetness was now in the background and no longer had the cashew / fruit qualities. I also detected a slight amount of earth and generic wood in the background. The end of the cigar was definitely on the spicy side. This is the way the Maestro Del Tiempo 5712 came to a close. The resulting nub was firm to the touch and cool in temperature.

During the first half of the cigar experience, I found (on each sample) the burn of the Maestro Del Tiempo 5712 to require more maintenance than I prefer. The burn slightly meandered and needed frequent touch-ups. The salt and pepper colored ash had a slight flowering effect, but wasn’t loose or flaky.

By the second half, things got on track and the burn became low maintenance. The flowering effect went away as well. If this was a tale of two burns, I’d assess the first half as “good” and second half as “excellent” – averaging to a “Very Good” on our assessment scale.

As for the burn rate and burn temperature of the Maestro Del Tiempo 5712, both were ideal. 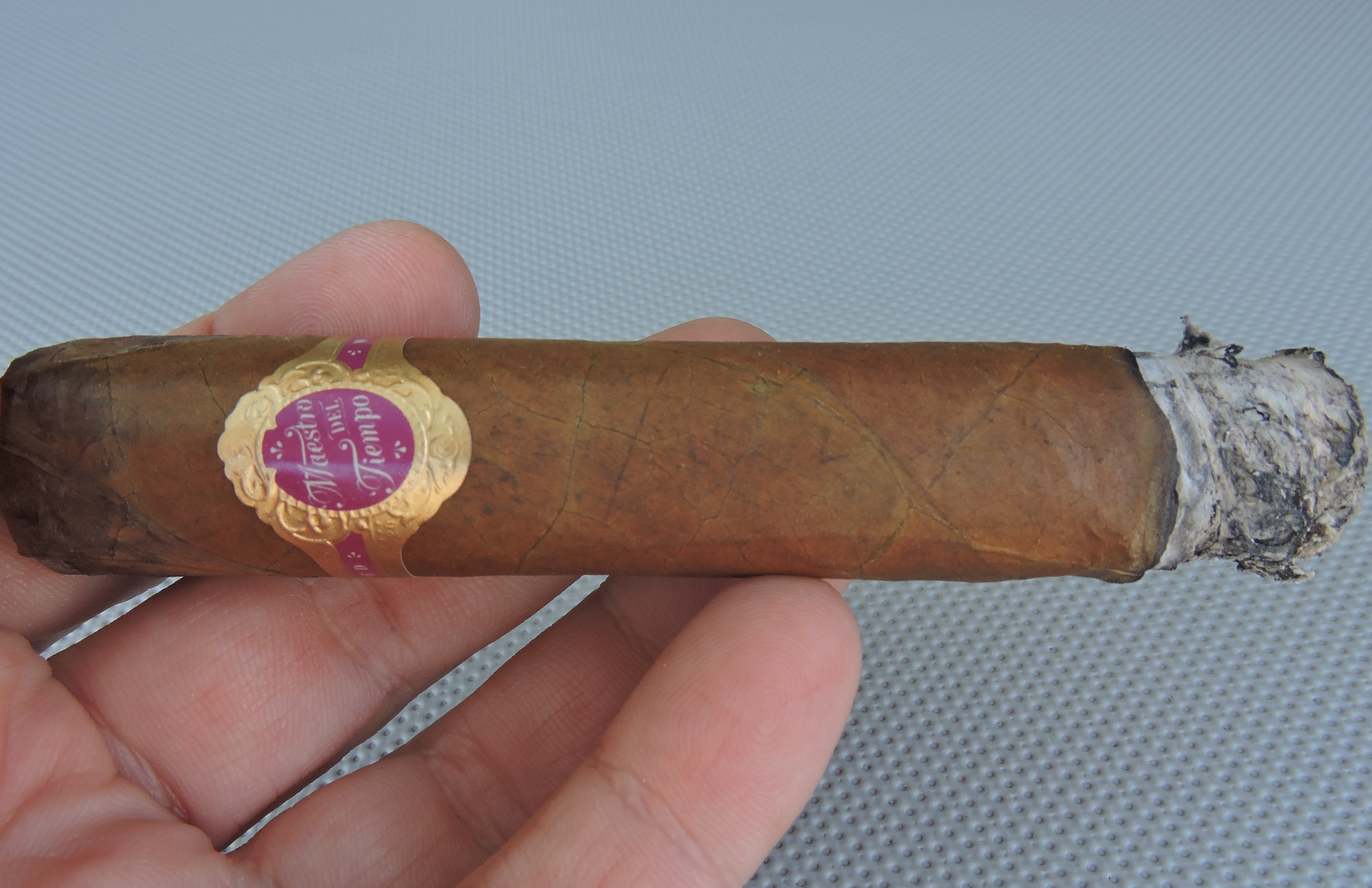 The draw of the Maestro Del Tiempo 5712 performed stellar. It had a touch of resistance to it – which is something that I like. To be this made for a very good cigar to puff on.

The strength was a different story. The Maestro Del Tiempo 5712 started out on the upper end of medium. The strength gradually increased to medium to full in the second half. Just when I thought the strength had flattened out, it spiked to full strength in the last third.

In terms of strength versus body, I found the body had the edge in the first half. Things then evened out before the strength took over in the last third.

Kyle Gellis may not have a lot of 50+ ring gauge cigars in his portfolio, but he certainly knows how to deliver a very good one. The Warped Maestro Del Tiempo 5712 has an excellent flavor profile and has a nice amount of complexity.  While the burn was a little more high maintenance in the first half, it did seem to correct itself on each sample I smoked. In the end, the pluses of Maestro Del Tiempo far outweighed the minuses – and as I mentioned up front, its a cigar that lived up to some high expectations. While this is a cigar I’d steer to a more seasoned cigar enthusiast, I wouldn’t discourage a newbie from smoking this to get a taste of a cigar with some kick at the end. As for myself, this is a cigar I’d easily smoke again – and it’s one that is box worthy.