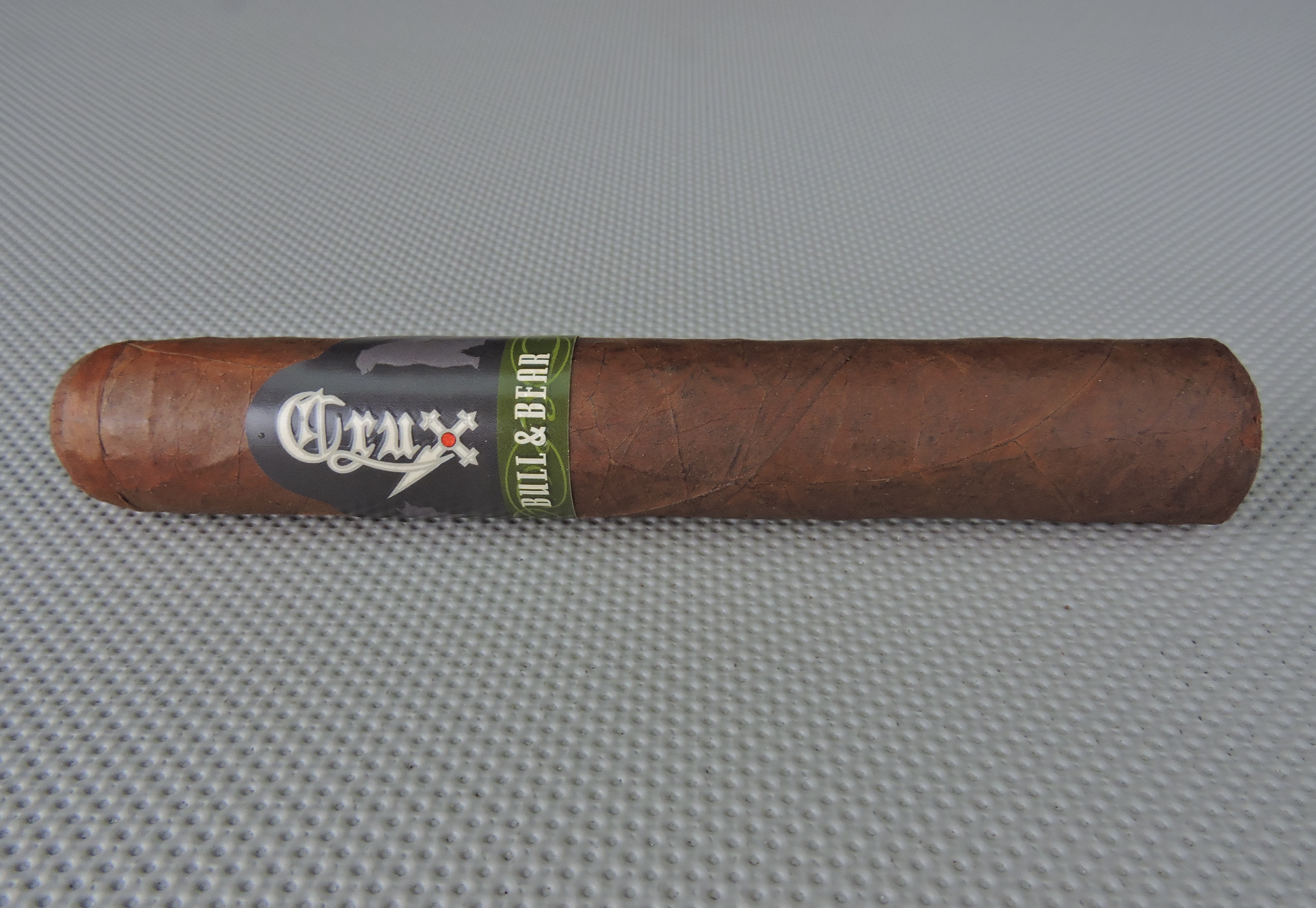 When Crux Cigars Company launched in 2014, the company initially released three lines (Ninfamaniac, Ninfamaniac Dark, and Skeeterz), all with ring gauges 33 and under. While this seemed like an unorthodox approach, it also allowed the company to enter the market with some differentiating offerings. Later that year, three additional lines would follow that would have a focus on more traditional (U.S.) vitola offerings. One of those lines. the Crux Bull & Bear, would have a focus toward larger ring gauges. Bull & Bear was originally launched in a Robusto Extra (5 1/2 x 55) and a Gordo Marblehead (6 x 60). Last year the company introduced a slightly smaller ring gauge into Bull & Bear with a traditional 6 x 52 Toro. Today we take a closer look at the Crux Bull & Bear in that Toro size. Crux Cigars has been introducing some excellent cigars into the market. The new Crux Bull & Bear Toro is no exception as this is another winner for the company.

Crux Cigar Company was formed by Jeff Haugen and Joel Rogers, the owners of Tobacco Grove in Maple Grove, Minnesota. The duo has looked to build on their experience on the retail end as they enter the world of manufacturers. Haugen personally is involved with the development of all of the blends in his portfolio.

Without further ado, let’s take a closer look at the Crux Bull & Bear Toro and see what this cigar brings to the table.

The Crux Bull & Bear is highlighted by a Habano wrapper. The cigar is made at Crux Cigars’ manufacturing partner, the Plasencia factory in Estelí, Nicaragua.

This year, the addition of the Toro size has brought the total number of vitolas in the line up to three.

The Crux Bull & Bear incorporates some of the unique packaging that has been seen across many other Crux other lines. The Bull & Bear comes packaged in 20-count boxes, but those 20-count boxes consist of four 5 packs. This gives retailers the option to sell by the box, by 5 packs, or individually. 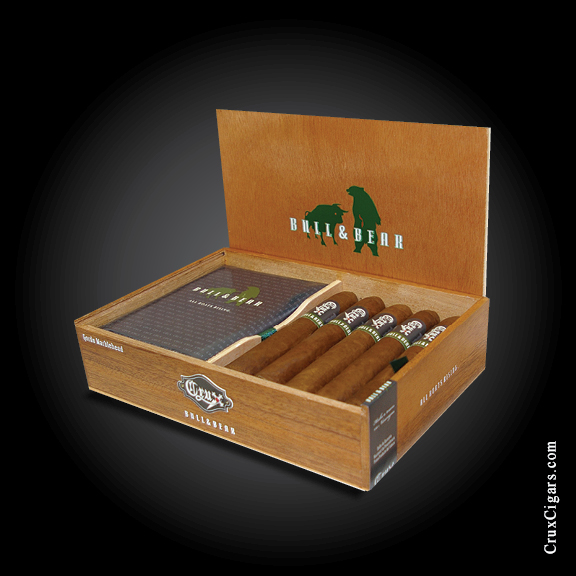 The Habano wrapper of the Crux Bull & Bear Toro has a medium to dark color. Depending on how light hits the wrapper, the wrapper will give off a colorado red tint of varying degrees. There also was some oil on the surface of the wrapper. While the were some visible veins and some thin wrapper seams, I found the Bull & Bear Toro to be on the smooth side.

The band to the Crux Classic features a dark charcoal-gray/black background on the upper portion of the band. On this section of the band is the gold, white and red Crux cigar logo in landscape mode. There is a gray bull to the left of the Crux logo and a gray bear on the right side. The lower part of the band has a green background. On that pattern is the text “BULL & BEAR” in white font. On the far right of the band is a black, gold, and red “crusader-like” dagger.

As I typically do, I commenced my cigar experience of the Crux Bull & Bear Toro with a straight cut. Once the cap was removed, I proceeded with the pre-light draw experience. The dry draw delivered a mix of chocolate, earth, cedar, and generic wood. Overall I considered this to be a satisfactory pre-light draw. At this point, I was ready to light up the Bull & Bear Toro and await what the smoking phase would have in store.

The Crux Bull & Bear Toro started out with notes of earth, cedar, chocolate, and a unique note that I will categorize as being “mint-like”. The retro-hale added layers of cedar, red pepper, and some of that mint-like note.

Throughout the first third, the cedar increased and became the primary note. This was not the standard cedar flavor I normally get on a cigar. There was an orange peel quality mixed in with it. Meanwhile, the earth and chocolate notes were mostly in the background, but occasionally popped into the forefront from time to time. The mint note was still present, but in the more distant background. Toward the end of the first third, some subtle notes of red and white pepper surfaced.

During the second third, the cedar notes remained primary. In addition to the orange peel note, there also was a subtle smoky quality to this the cedar note. The chocolate, earth, and pepper notes now were grounded in the background with the mint note more distant. The retro-hale now was mostly cedar and red pepper.

Toward the end third of the Crux Bull & Bear Toro, there was a spike in the pepper spices. These moved into the forefront and joined the cedar notes. There still were some traces of earth, chocolate, and mint note, but it was definitely the spices in control. This is the way the cigar experience came to a close. The resulting nub was cool in temperature and firm to the touch.

The Crux Bull & Bear Toro performed quite well on its burn. Overall this cigar maintained a straight burn path and had a near straight burn line. This was a cigar that did not need excessive touch-ups. The resulting ash was on the firm side with a nice salt and pepper color. As for the burn rate and burn temperature, both were ideal. 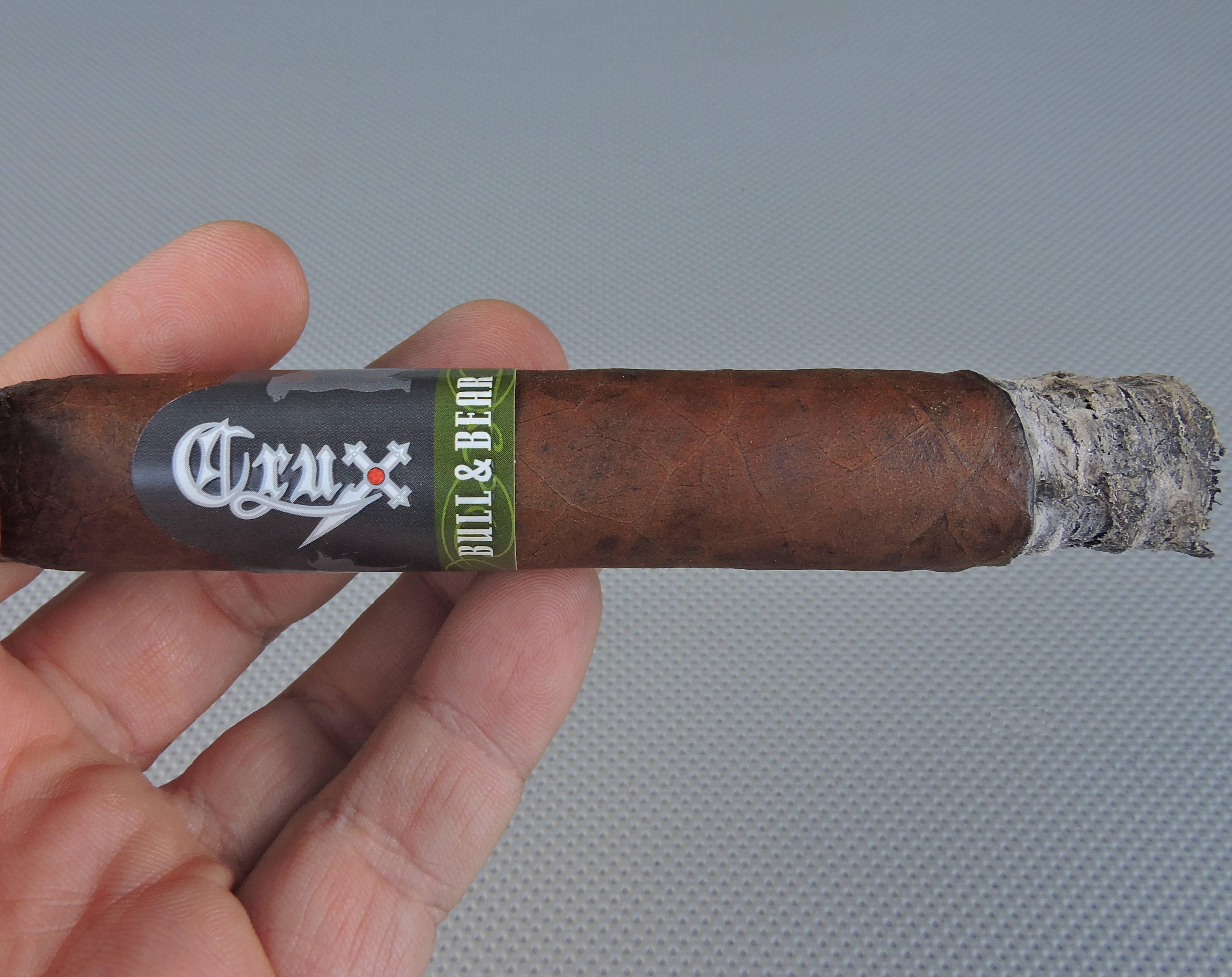 The draw also performed quite well. It had a touch of resistance to it – which is something that I like. At the same time, this as a low maintenance cigar to derive flavor from.

While this cigar has a name like “Bull & Bear”, it isn’t going to be a cigar that is a nicotine bomb. For the most part, I found the Crux Bull & Bear Toro to maintain a medium strength level from start to finish. There was a slight increase in strength along the way, but toward the end I found this cigar to still be in the medium range.

As for the body, I found the flavors to be medium to full-bodied. The body did have a slight spike in the last third, but I found it fell just a little short of transitioning to the full-bodied.

In terms of strength versus body, I definitely gave the edge to the body.

There are two things that I think Crux is doing very well. The company is building a portfolio with something for everyone – and the portfolio is delivering unique flavor profiles. The Crux Bull & Bear delivered is an excellent offering.  Sometimes analogies like orange peel and mint in a review can be taken too literally, but I hope it illustrates a point that there was something unique about this cigar. There is a lot of spice at the end of the cigar, but if you like spice you will be pleased that it wasn’t harsh or pungent.

The Crux Bull & Bear is a cigar I would recommend to an experienced cigar enthusiast. A novice looking for something in the medium plus range who doesn’t mind some spice will enjoy this. As for myself, this is a cigar I would smoke again – and it’s worthy of a box split.