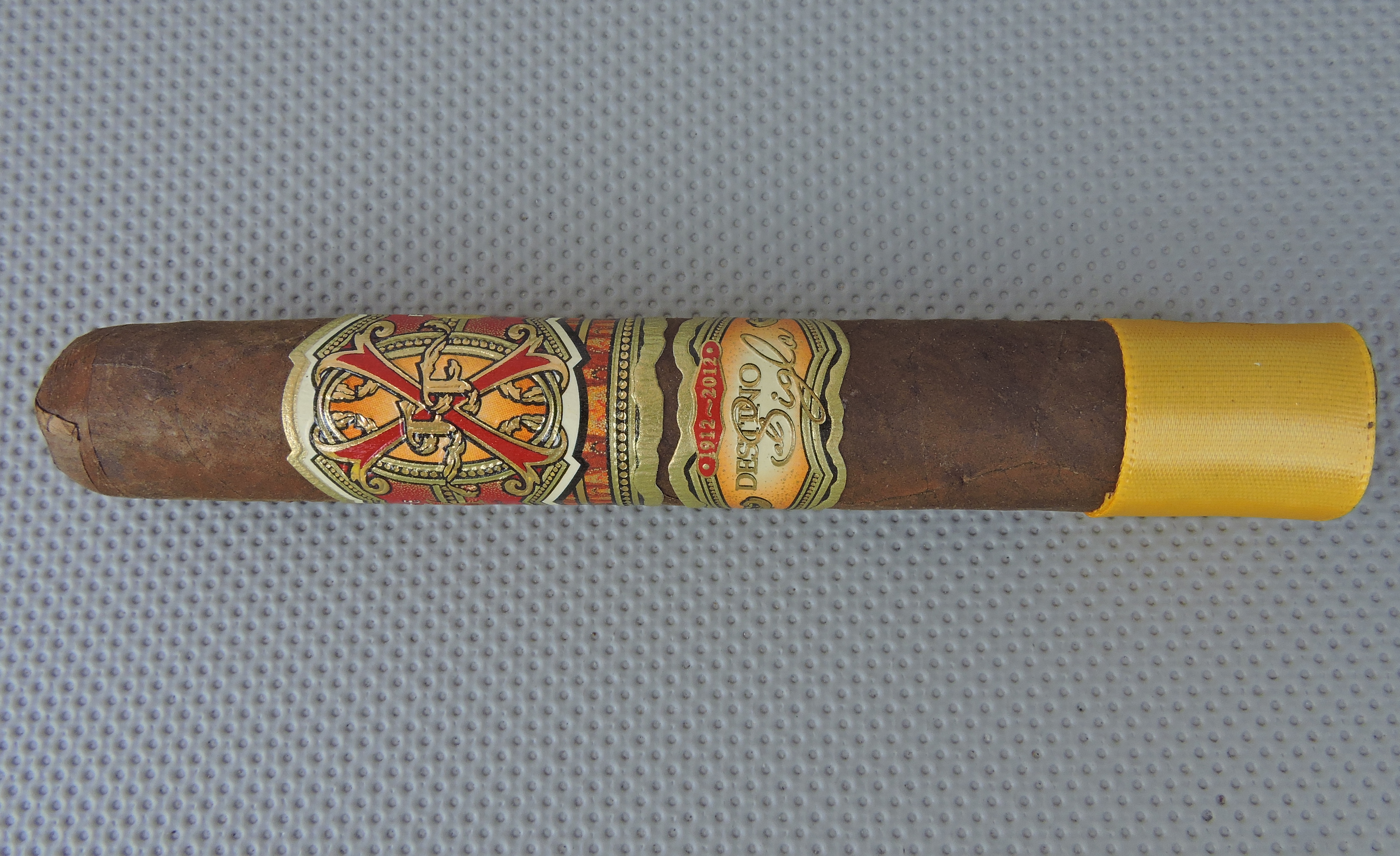 The small batch boutiques in today’s market carry a double edged sword. On one hand, they are appreciated for the craftsmanship and attention to detail. On the other hand, may are frustrated chasing them down. Some companies such as Viaje have actually adopted a model where many retailers do not know what small batch releases are coming they way until just before they are ready to ship. Arturo Fuente is not a boutique company; but I mention this because with the OpusX Rosado Oscuro Oro it is a small batch production and that quietly showed up (to the surprise of many consumers) at Arturo Fuente retailers late in 2015. It quickly became one of the most sought after OpusX releases.

As mentioned there is very little know about the Fuente Fuente OpusX Rosado Oscuro Oro other than that it is a Dominican puro.

The Fuente Fuente OpusX Rosado Oscuro Oro is available in five sizes. Each of the five sizes wee packaged together in a 15 count boxes with three cigars of each size included in the box:

As mentioned the wrapper of the Fuente Fuente OpusX Rosado Oscuro Oro Robusto is a dark rosado – which can be best described as a dark cinnamon color. The wrapper seemed to have somewhat of a silky complexion to it. The wrapper is on the smooth side with only some thin visible veins and thin visible wrapper seams.

There are two bands on the Fuente Fuente OpusX Rosado Oro Oscuro. The primary band is the iconic red, gold, yellow, white, and black Fuente Fuente OpusX band. Just below that bend is a secondary band with a similar color scheme. Sitting on an yellow to red gradient background is the text “DESTINO AL SIGLO” (meaning century of destiny). The “Siglo” is in a large cursive script. Above the text is a small red plate-like background with the text “1912-2012” in small gold font. A gold and black frame makes up the trim of the band.

A yellow ribbon goes around the footer of the cigar.

Prior to lighting up the Fuente Fuente OpusX Rosado Oscuro Oro Robusto, I went with my usual choice of a straight cut to remove the cap. After the cap was clipped, I moved on to the pre-light draw. The dry draw first delivered a mix of leather and wood. As  I progressed with the dry draw, I picked up some more in the way of natural tobacco sweetness. Overall I considered this to be a satisfactory pre-light draw. At this point I removed the yellow ribbon from the OpusX Rosado Oscuro Oro Robusto, lit up the cigar and awaited what the smoking phase would have in store.

The Fuente Fuente OpusX Rosado Oscuro Oro Robusto started out with a mix of cocoa, earth, mineral, and a slight burnt cherry note. The cocoa and the cherry notes went primary early on while the earth and mineral shifted into the background. The retro-hale produced an a layer of white pepper.

By about the midpoint of the first third, the cherry notes receded into the background joining the mineral and pepper notes. I also detected a slight white pepper note on the tongue. The cocoa notes remained primary and were also present on the after-draw.

The second third of the OpusX Rosado Oscuro Oro Robusto saw the mineral and earth notes push toward the forefront. Before the cigar reached the halfway point these notes displaced the cocoa as primary flavors. The cocoa and white pepper were now in the background and the cherry was a more distant note. The cocoa also had less of a role on the after-draw.

The last third saw the mineral and earth notes remain primary. The white pepper notes were now a little more prominent. The cocoa notes were on the subtle side and the cherry had pretty much dissipated. This is the way the cigar experience of the OpusX Rosado Oscuro Oro Robusto came to a close. The resulting nub was firm to the touch and cool in temperature.

Overall the Fuente Fuente OpusX Rosado Oscuro Oro Robusto performed quite well when it came to its burn. The cigar maintained a straight burn path from start to finish. The burn line had a slight curvature to it, but this really didn’t warrant much more in the way of touch-ups. The resulting ash had a light gray color to it. The ash was was skewed toward the firm side. Meanwhile the burn rate and burn temperature were both ideal. 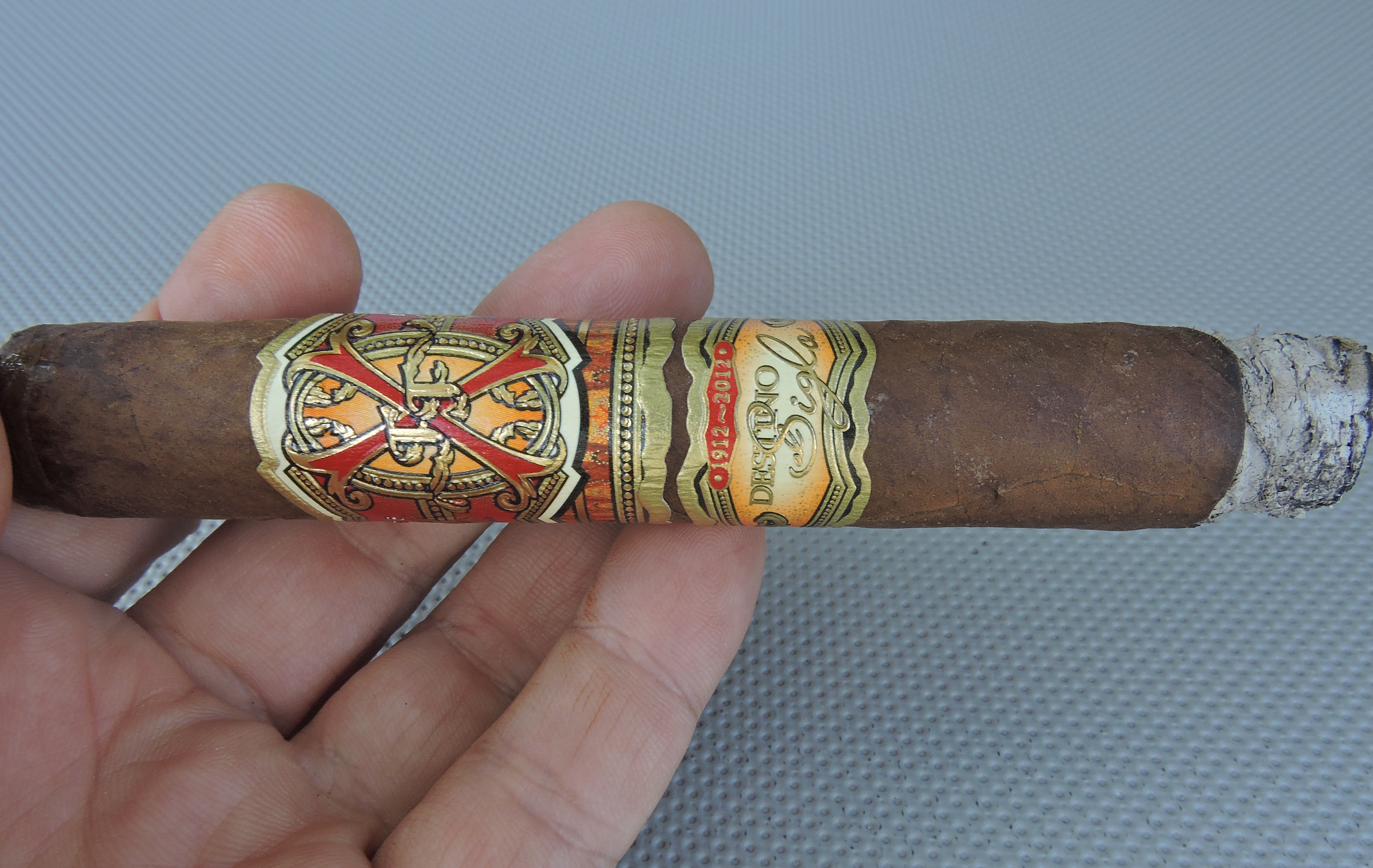 The draw to the OpusX Rosado Oscuro Oro Robusto was open, but not loose. This was a low maintenance cigar t derive flavor from.

In terms of strength and body, both attributes of the OpusX Rosado Oscuro Oro Robusto balanced each other very nicely – with neither overshadowing the other. I found this cigar to start out as a medium strength, medium-bodied cigar. There was gradual increase in intensity in both attributes and by the last third, this cigar had to medium to full strength and medium to full-bodied.

The Fuente Fuente OpusX Rosado Oscuro Oro Robusto. This is definitely a different cigar than any of the other OpusX offerings. The sweetness delivered during the first third of smoking experience was the part of this cigar that really shined. Normally, I am not a fan of sweetness, but I found it worked very nicely with this cigar. The cigar does lose a little steam toward the end, and that could have given this a little more of a score boost.

Overall, this is a cigar I would recommend to a more seasoned cigar enthusiast, but I certainly wouldn’t discourage a novice from trying this cigar. As for myself, the Robusto size earns enough on merit to be a box worthy cigar in my mind.