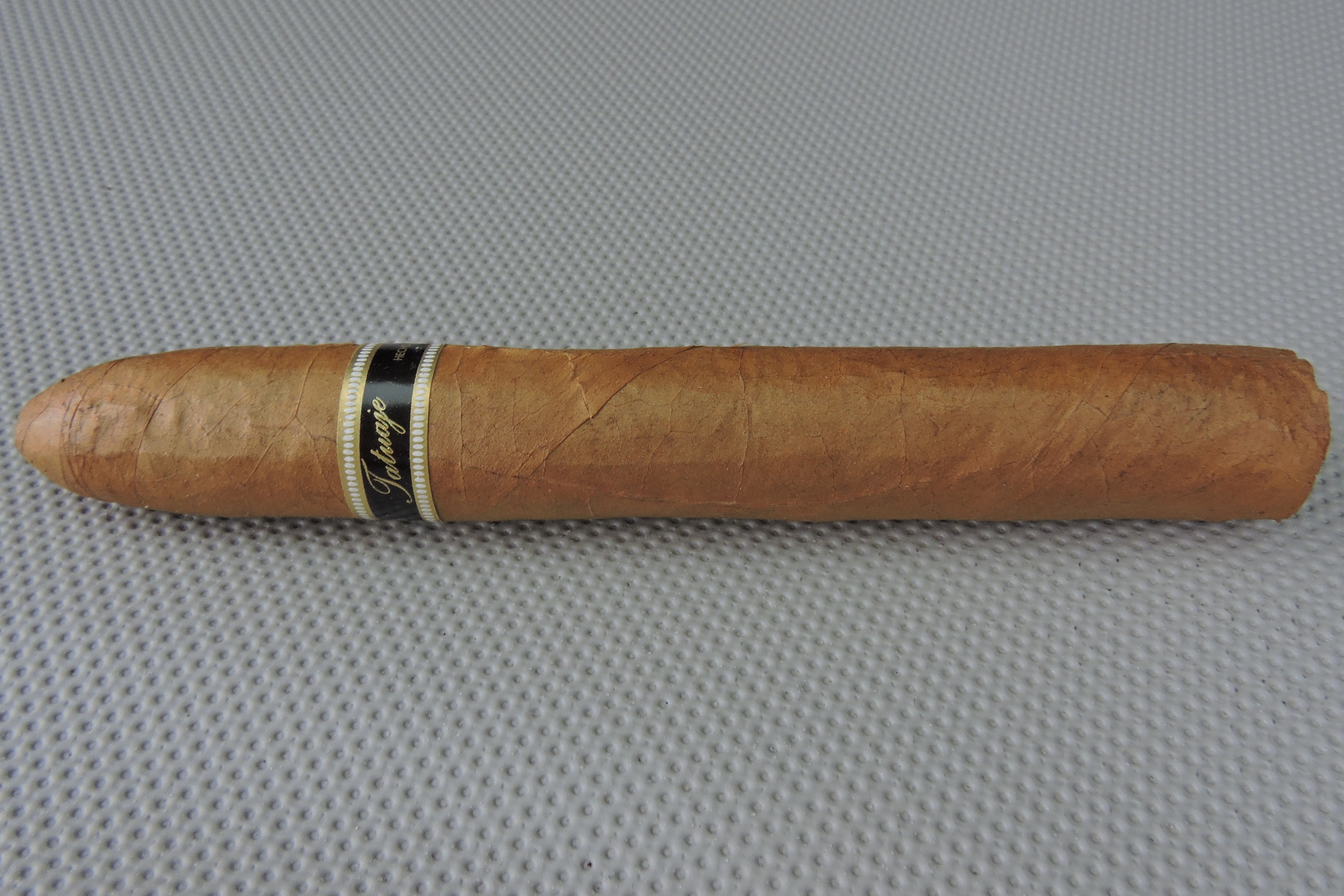 Throughout the years, both Tatuaje and L’Atelier have shown an affinity toward the wine industry and the branding of Négociant Monopole reflects this. A Négociant is someone who purchases grapes juice or wine from other vineyards. A negotiant may bottle the wine under his own name either as is or after blending with other wines. The term Monopole refers to an area in controlled by a single winery or wine company. The wine from this area is typically sold by one company. The two terms seem appropriate to this project.

Without further ado, let’s break down the Négociant Monopole No. 2 and see what this cigar brings to the table. 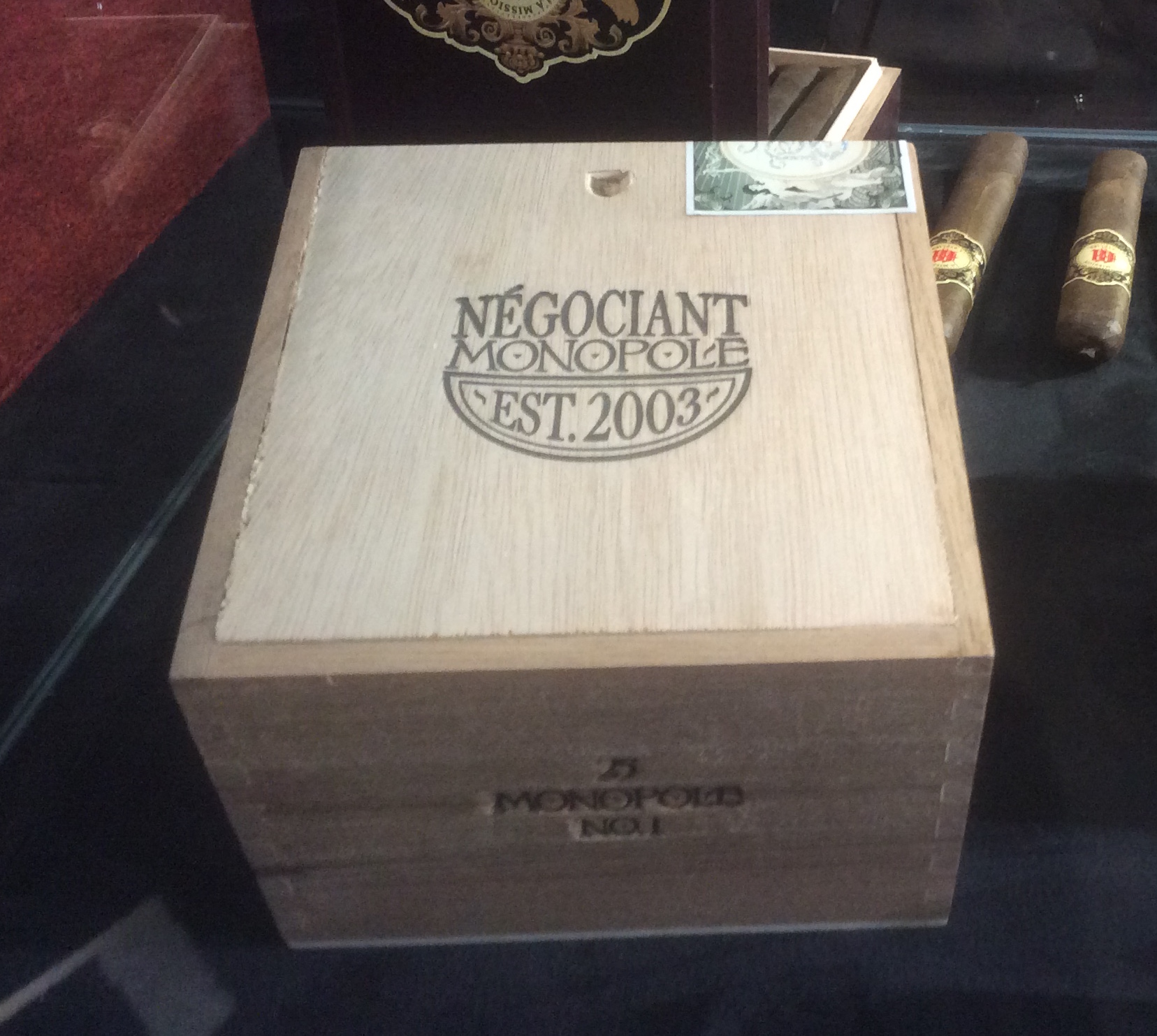 Packaging of the Négociant Monopole

The Négociant Monopole is an Ecuadorian Connecticut Shade blend. It is actually (at least) a three country multinational blend – something pretty rare for both companies (most of the releases for both companies have been two). While Tatuaje has some Ecuadorian Connecticut wrapped cigars, this appears to be a first for L’Atelier Imports. There is also a double binder, including one of the binders being Mexican – again something we really haven’t seen from either company. The cigars are produced out of the My Father Cigars’ factory – a factory used by both Tatuaje and L’Atelier Imports.

The Négociant Monopole is available in three sizes – each packaged in 25 count boxes.

The Ecuadorian Connecticut Shade wrapper of the Négociant Monopole No. 2 had a golden brown color with a slightly weathered look to it. There was some oil on the surface of the wrapper. The wrapper itself is slightly bumpy thanks to some thin visible veins, however the wrapper does a good job at hiding the seams. There is a gentle taper toward the belicoso tip

The cigar is banded as a Tatuaje, but utilizes the L’Atelier Imports colors. Because any cigar that has used the L’Atelier name has disclosed it uses Sancti Spirtus tobacco, I see why they opted to go with the Tatuaje naming and style. This band is an upgraded version of the classic Tatuaje band (reminiscent of the Tatuaje Black Label Corona Gorda band) with a black glossy background, gold and white-colored trim, and gold font. The name “Tatuaje” is in the classic Tatuaje-style cursive font. To the left and right is the text “HECHO A MANO”. The far right has a Tatuaje tattoo stamp.

As I do with all figurado cigars, I went with a straight cut to remove the tip of the Négociant Monopole No. 2. For this cigar, I used my Credo Special T cutter with the 36 ring gauge hole to get an ideal cut. This allowed me to get a smaller ring gauge cut an to take advantage of the tapering of this cigar. I then proceeded with the pre-light draw. The dry draw was simple as I detected notes of cream and cedar. Overall I considered this to be a very good pre-light draw. At this point I was ready to light up the Négociant Monopole No. 2 and see what the smoking phase would have in store.

The start to the Négociant Monopole No. 2 delivered more notes of cream and cedar. There was a sweet citrus note that I picked up as well. In the background there was a slight black pepper note. Meanwhile the retro-hale delivers an additional (but subtle) layer of cedar and black pepper.

As the Négociant Monopole No. 2 moved though the first third, the creaminess got richer. I hate using the “buttery cream” analogy, but it came pretty close.to it. The citrus and cedar components became more of  background note, but from time to time surfaced in the forefront. In the more distant background, there still was some black pepper on the tongue.

During the second third, I still found the cream notes to be in control. The cedar notes picked and showed more of a presence in the forefront. The citrus component was at the same level as the first third – i.e. still making more occasional appearances in the forefront. The pepper on the tongue remained constant.

Toward the end of the second third, the cedar was now on par with the cream in the forefront. During the final third of the Négociant Monopole No. 2, the cedar eclipsed the cream and became the primary note. The cream and citrus were still a part of the equation, but were now in the background. In addition there still was the slight black pepper presence on the tongue. This is the way the Négociant Monopole No. 2 came to a close. The resulting nub was cool in temperature, but slightly soft to the touch.

The burn to Négociant Monopole No. 2 maintained a straight path from start to finish. Early on I found the to be a low maintenance burn. As the cigar burned through the middle and latter stages, I did find this to need some more touch-ups than I prefer. The resulting ash had a light gray color to it. This wasn’t an overly firm ash, but it was not loose nor flaky either. Meanwhile the burn rate and burn temperature were both ideal. 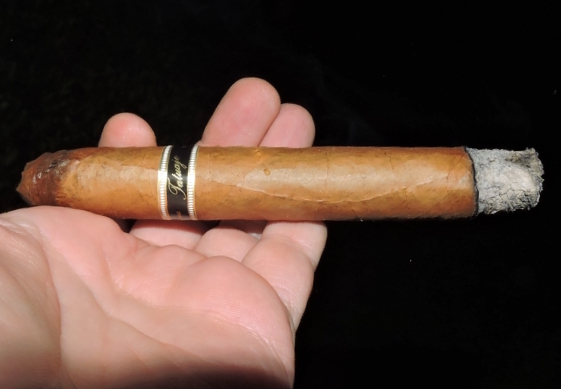 Burn of the Négociant Monopole No. 2

As for the draw, it seemed to have the right amount of resistance to it. This was a law maintenance cigar to derive flavor from.

In terms of strength versus body, I found the body had the slight edge throughout the smoking experience.

I find the term collaboration one to be over-used in the cigar industry. My definition is when two parties, typically from separate companies get together, roll up their sleeves, and develop a cigar from the ground up. As mentioned up-front, I’m really not sure how much the Négociant Monopole falls into that category between the factions of Tatuaje and L’Atelier Imports. With the Négociant Monopole No. 2, I think this is a mute point as I found that Johnson and Co. delivered a very good Connecticut Shade cigar to market. In particular, I found the blend worked very well with with Belicoso size of the No. 2.  I guess a natural comparison is with the Cabaiguan line – and I’d put this a little bolder strength and body-wise.

The Négociant Monopole No. 2 is a cigar I would recommend to either a novice or experienced cigar enthusiast. The price point is a little high, but its still enjoyable. As for myself, it’s a cigar I would smoke again – and it’s worthy of a box split.