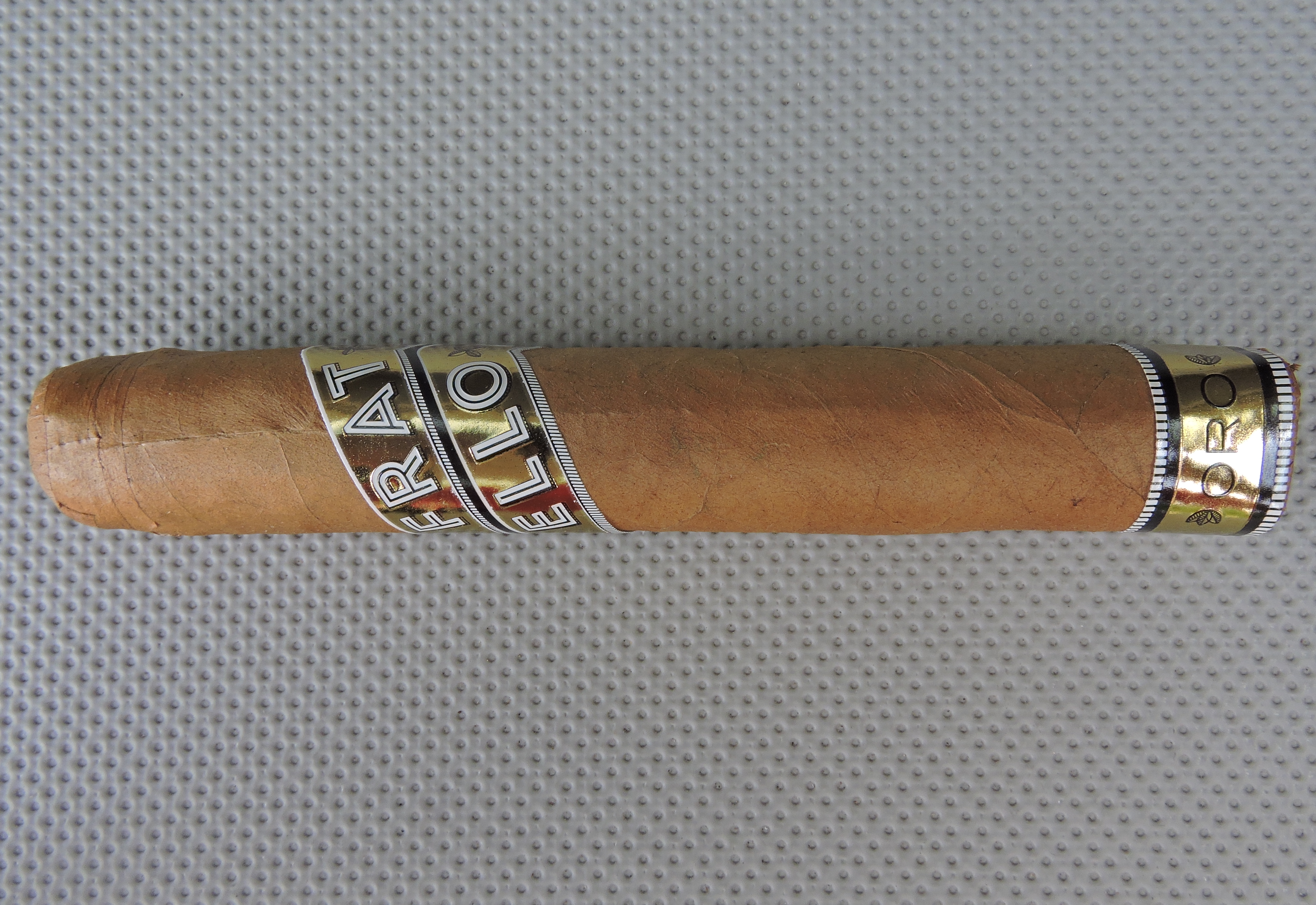 The Fratello Oro is the third line to be released from Omar de Frias’ Fratello Cigars. When de Frias launched his company in 2013, he released Fratello, a Habano wrapper offering. Two years later he added his second line, the Fratello Bianco – a line that features a San Andres Maduro wrapper. With the Fratello Oro, de Frias fills a gap he had in his portfolio by bringing his first Connecticut Shade cigar to market. Fratello Oro is different than his previous two releases in one other way. While Fratello and Fratello Bianco were made at the Joya de Nicaragua factory in Nicaragua, de Frias is using the legendary La Aurora factory for the Fratello Oro- a factory that happens to be in de Frias’ home country of the Dominican Republic. Recently, I’ve had an opportunity to smoke the Fratello Oro. Since launching in 2013, de Frias has been delivering some excellent products. With Fratello Oro, there is no doubt that he has hit “gold” with this blend.

As mentioned above,  the launch of the Fratello Oro filled a gap in the company’s portfolio. Until the release of Fratello Oro, the cigars offered by Fratello were in the medium/medium plus range. When Oro was announced de Frias stated, “We wanted a mild to medium cigar with a creamy after taste but that also embodies the true nature of our company which is full flavor cigars.”

Without further ado, let’s break down the Fratello Oro Robusto and see what this cigar brings to the table.

The Fratello Oro uses a four country multi-national blend. This is highlighted by an Ecuadorian-grown Connecticut Shade wrapper.

The Fratello Oro was launched in six sizes. Each is packaged in 20 count boxes. 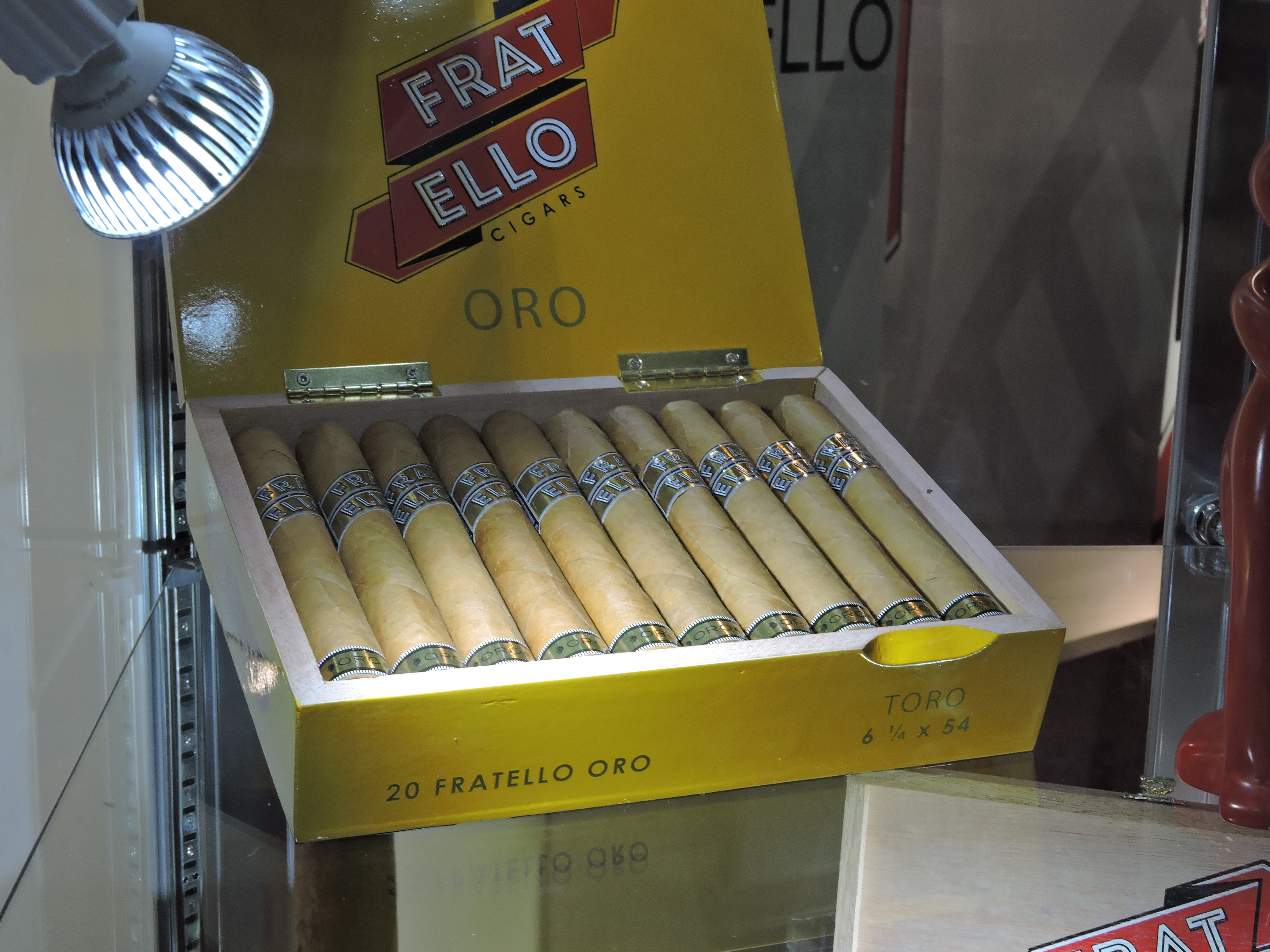 The Ecuadorian Connecticut Shade wrapper of the Fratello Oro Robusto had a light golden-brown color to it. This wrapper also had more of a silky complexion to it. While there were some thin visible veins and thin wrapper seams, this was a wrapper that was on the smooth side.

The Fratello Oro has a gold-colored variant of his signature Fratello band with the unique “zig-zag/marquis design”. The band itself has a metallic gold background with thin white trim. The zig-zag shape features the text “FRAT” and “ELLO” in a large white font on both the left and right side. There is a small black cross design dividing each side of the zig-zag. Two thin pinstripes of black and white color respectively run through the middle of the band. On the far right of the band is a black nameplate-style design element in landscape mode. On that element is the text “FRATELLO ORO” in white font.

There is a secondary band around the footer. It has a metallic gold background with white and black trim. On the center of the band is the text “ORO” in thin black font surrounded by two black adornments.

Prior to lighting up the Fratello Oro Robusto, I went with my usual choice of a straight cut to remove the cap. After clipping the cap, I proceeded with the pre-light draw. The dry draw was pretty straight-forward as I detected notes of wood and cream. Overall this was a satisfactory pre-light draw. At this point, I removed the footer band of the Fratello Oro Robusto, lit up the cigar, and awaited what the smoking phase would have in store.

The cream and wood notes that I detected on the pre-light draw continued to be present on the opening puffs of the Fratello Oro Robusto. I detected a slight amount of black pepper in the background on the tongue. This pepper was also more prominent, but not overpowering on the retro-hale.

As the Fratello Oro Robusto progressed through the first third, the cream notes took over as a primary note. Simultaneously a chestnut note also surfaced in the forefront with the cream. During this stage, the chestnut and cream alternated in intensity as the dominant note. Meanwhile, the wood receded into the background and now had more of a cedar sweet-spice quality to it.

At the start of the second half of the Fratello Oro Robusto, the cream and chestnut combination continued to alternate as the primary notes. There was now a definite increase in the wood and cedar components. At the same time, there still was a touch of black pepper on the tongue.

By the last third of the Fratello Oro Robusto, the wood and cedar notes eclipsed the cream and chestnut as the primary flavors. I did find the cream and chestnut significantly decreased during this phase. As for the black pepper, it was still present on the retro-hale. This is the way the cigar experience came to a close. The resulting nub was firm to the touch and cool in temperature.

The burn to the Fratello Oro Robusto maintained a straight path from start to finish. While there was a slight jaggedness to the burn line, this was a cigar that was never in danger of canoeing nor tunneling. The resulting ash had a salt and pepper color. The ash was at times slightly loose. The burn rate and burn temperature were both ideal. 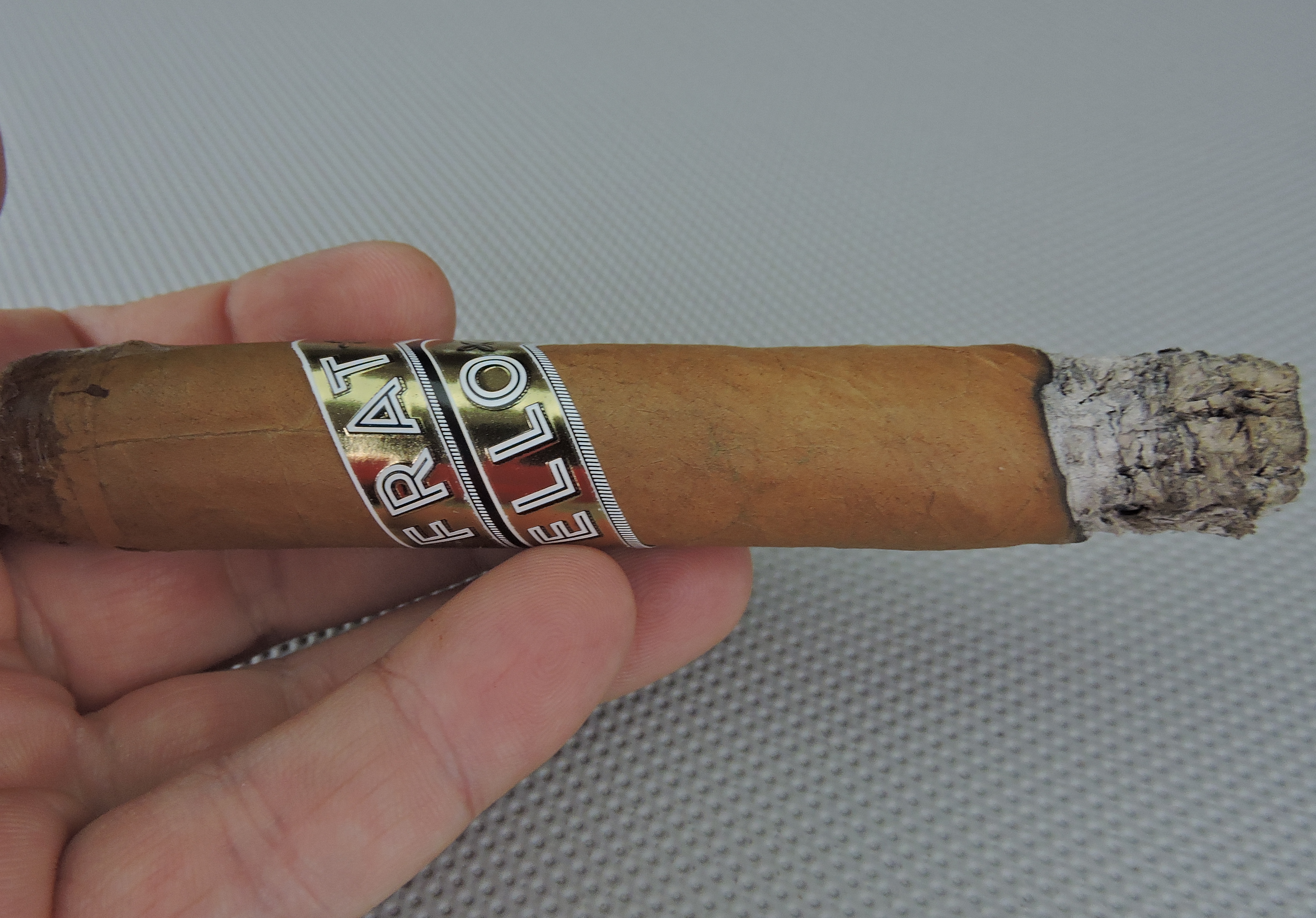 Burn of the Fratello Oro Robusto

The draw to the Fratello Oro Robusto also performed very well. This was a draw that was not too tight, nor too loose. In the end, this was a low maintenance cigar to derive flavor from.

The Fratello Oro Robusto definitely fills a spot in de Frias’ portfolio – namely offering something on the milder side. Strength-wise, the Oro Robusto started out in mild territory. There is a slight increase in strength and by the second half, the strength had progressed to mild to medium.

The body followed a similar pattern. The Oro Robusto started out mild to medium-bodied, but by the second half, this cigar was in medium-bodied territory.  In terms of strength versus body, I found the body had the edge throughout the smoking experience.

Now with a Habano, Maduro, and now a Connecticut Shade offering, Omar de Frias has the whole spectrum covered in terms of offerings in the Fratello Cigars portfolio. The Fratello Oro Robusto is an excellent Connecticut Shade cigar. I found it kept to a very traditional profile in terms of strength and body. This was a cigar that also had excellent flavor and is a cigar that can be smoked right out of the box. Even though this is a milder offering, I still see there is some excellent aging potential with this cigar. It’s a cigar I could recommend to any cigar enthusiast any time of the day. As for myself, it’s a box worthy cigar.