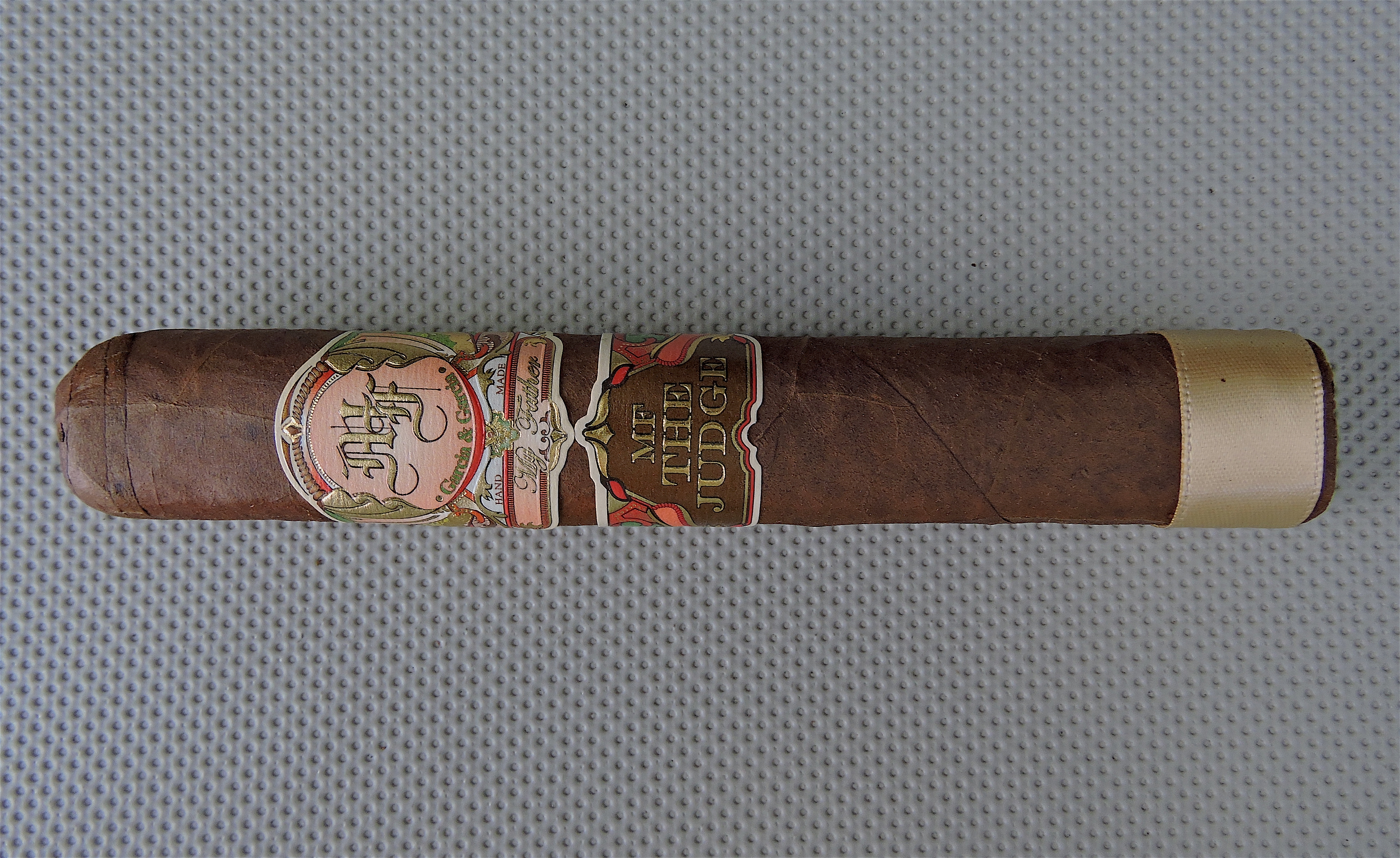 My Father The Judge Toro

My Father The Judge is the fourth regular production line under the Garcia family’s My Father Cigars’ self-titled brand. The Judge introduces a new Sumatra offering cigar into the company’s portfolio. While My Father Cigars has produced Sumatra wrapper blends for companies such as Tatuaje and Ashton, you have to go back to 2009 when My Father Cigars last produced a Sumatra blend in its own portfolio. That cigar was a valued priced cigar known as the La Reloba Sumatra. With The Judge, the name was inspired by a family friend of the Garcias who happened to be a judge. The cigar had a low-key unveiling at the 2016 IPCPR Trade Show before being released late last year.  Today I take a closer look at The Judge in the large 6 x 56 Toro format.

Without further ado, let’s break down the My Father Judge Toro and see what this cigar brings to the table.

The Sumatra wrapper of The Judge originates from Ecuador. Given it is on the darker side, it has an “Oscuro” designation. The remainder of the blend includes tobaccos grown on the Garcia family farms in Nicaragua. The Judge is produced at the My Father Cigars factory in Esteli, Nicaragua.

The Judge is available in three box-pressed sizes. Each of the three sizes was packaged in 23 count boxes. The Grand Robusto and the Toro were released late in 2016 and were skewed toward larger ring gauges. Earlier in 2017, the Toro Fino size was released – adding a more traditional 6 x 52 line extension.

The Ecuadorian Sumatra Oscuro wrapper of The Judge Toro has a dark chestnut color to it. There was a light coating of oil on the surface of the wrapper. While there were some thin visible veins and thin visible wrapper seams, this was a wrapper that had a smooth surface. This box-press has a classic soft Cuban-style press. Overall this was a firm box-press with no soft spots.

There are two bands on The Judge. The primary band is the classic peach/pink, green, gold, and white My Father Cigars band found across the line. The secondary band sits below the main band. At the center of the band, on a brown background is the”MF THE JUDGE” in gold font. The rest of the band has pink, green and gold design elements. On the far left and far right are the initials “MF” in a classic gold-colored gothic font.

A beige ribbon surrounds the footer of the My Father Judge.

Before lighting up The Judge Toro, I went with my usual choice of a straight cut. Once the cap was removed, I proceeded with the pre-light draw. The cold draw delivered a mix of wood and natural tobacco. There was a very subtle black pepper note that I still picked up. While this wasn’t the most exciting pre-light draw, it was not a bad one either. I then proceeded to remove the footer ribbon, light up The Judge Toro, and commence the smoking experience.

The Judge Toro started out with notes of wood, white pepper, along with a slight natural tobacco sweetness. The wood notes moved to the forefront early on and were quickly joined by some earth notes. Meanwhile, the white pepper and natural tobacco notes remained in the background. On the retro-hale, I picked up the signature Garcia Family black pepper note.

The last third of The Judge Toro saw the wood return to the forefront joining the earthy notes. While the natural tobacco and black pepper had increased during the second third, this seemed to level off during the last third. This is the way the cigar experience of The Judge Toro came to a close. The resulting nub was firm to the touch and cool in temperature.

Overall I found the burn of The Judge Toro to be a low maintenance one. The cigar had no trouble maintaining a straight burn path from start to finish. There was a little bit of jaggedness on the actual burn line itself, but this didn’t warrant much in the way of additional touch-ups above the norm. The resulting ash had a gray color to it. This wasn’t an overly firm ash, but it was not a loose or flakey ash either. Meanwhile, the burn rate and burn temperature were both ideal. 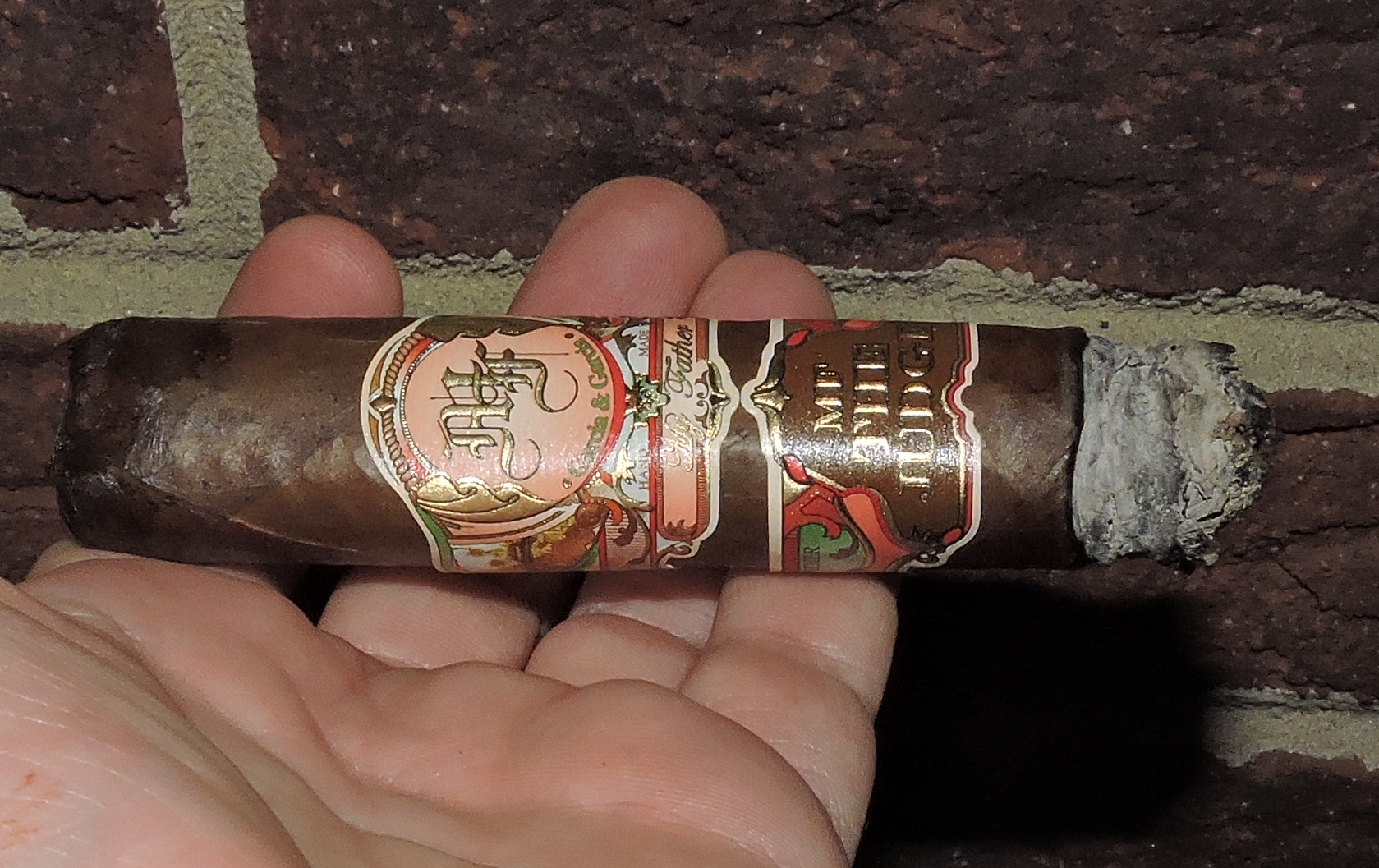 Burn of the My Father The Judge Toro

As for the draw, it also performed quite well. This was a draw that was not too loose, nor too tight. Overall, I found this to be a low maintenance cigar to derive flavor from.

I had heard The Judge was a fuller cigar, but my experiences with The Judge Toro did not support that claim. I found this to be a medium strength, medium-bodied cigar from start to finish. In terms of strength versus body, I found that both attributes balanced each other very nicely with neither one overshadowing the other.

One footnote – I did find the new 52 ring gauge Judge Toro Fino line extension to have more in the way of strength and body than the 56 ring gauge Toro being assessed here.

When The Judge was announced, I was excited when I found out that My Father Cigars was coming out with an all box-pressed line with an Ecuadorian Sumatra wrapper. As I have smoked through several samples of The Judge, I found it to be a solid cigar with excellent construction. At the same time, I also found this cigar to lack a “wow” factor. The flavors to this cigar were good, but they weren’t very exciting. With a cigar that has a price point of $12.10, I guess I was wanting something more.  Still, this is a cigar I would encourage cigar enthusiasts to pick up one and try.