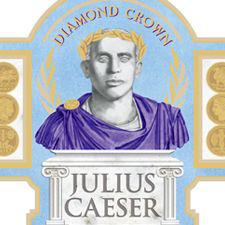 At the 2017 IPCPR Trade Show, J.C. Newman Cigar Company unveiled a new line extension to its Julius Caeser line in the form of a 5 1/2 x 43 Corona size.

The Diamond Crown Julius Caeser is a cigar that was introduced in 2010 to commemorate the 115th anniversary of J.C. Newman Cigar Company and the 135th birthday of company founder J.C. Newman. When Newman came to the United States from Hungary, he was told at immigration that he needed a middle name. It was suggested he take the name “Caesar”, however the name was misspelled on the paperwork as “Caeser”. The misspelling ended up staying with him, which is why it is spelled the way it is on the cigar.

The Julius Caeser is made by the Fuente family in the Dominican Republic at the famed Tabacalera A.Fuente y Cia factory. The blend features an Ecuadorian Havana Seed wrapper over a binder and filler of “Central American Tobaccos”

The Diamond Crown Julius Caeser Corona will be packaged in 20-count boxes.

At a glance, here is a look at the Diamond Crown Julius Caeser line: