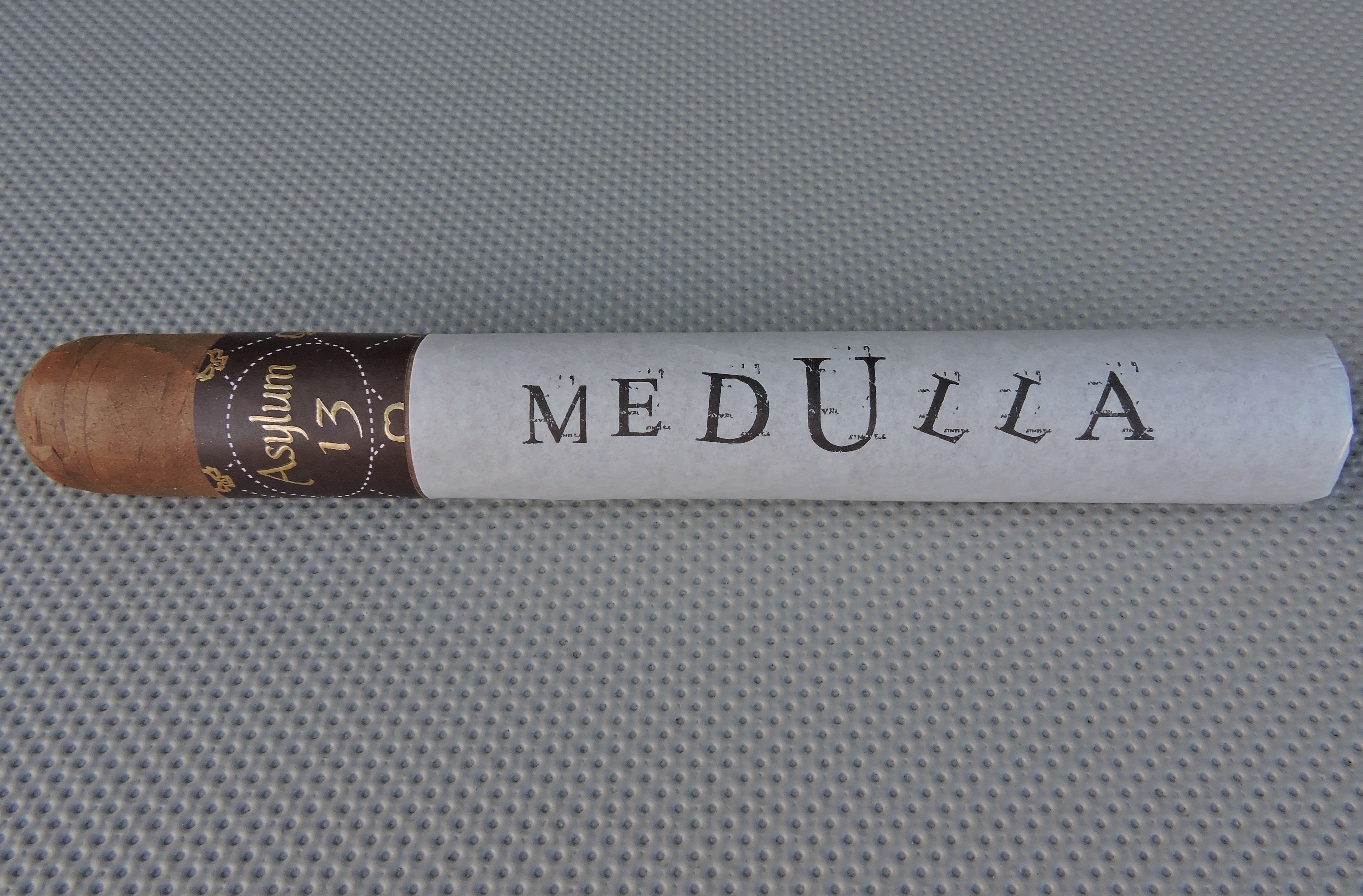 It’s hard to believe that it has been five years since Asylum Cigars was founded. Asylum Cigars is a partnership between Christian Eiroa and Tom Lazuka. The brand has built a strong and diverse portfolio of offerings during these years and is credited for spearheading the 60+ ring gauge movement. At the same time, the company has been known for doing many creative projects. At the 2017 IPCPR Trade Show, Asylum introduced a project known as the Asylum 13 Medulla Oblongata. The Medulla Oblongata is a 100% Honduran offering produced in two formats: parejo and box-pressed. The parejo format is known as Medulla and the box-pressed format is known as Oblongata,  Today we focus on the Asylum 13 Medulla 52 x 6 – the parejo offering in a traditional toro format.

Medulla Oblongata refers to a part of the brain, located in the brainstem. It is responsible for autonomic (involuntary) functions ranging from vomiting to sneezing.

Without further ado, let’s take a look at the Asylum 13 Medulla 52 x 6 and see what this cigar brings to the table.

The Asylum 13 is a 100% Honduran puro. The Honduran Corojo wrapper comes from the Eiroa Tobacco farm and is a higher priming leaf.

Medulla Oblongata is packaged in 50-count boxes featuring 25 parejo cigars (known as Medulla) and 25 box-pressed cigars (known as Oblongata). The cigars feature option for retailers to refill the box with the cigar of choice. 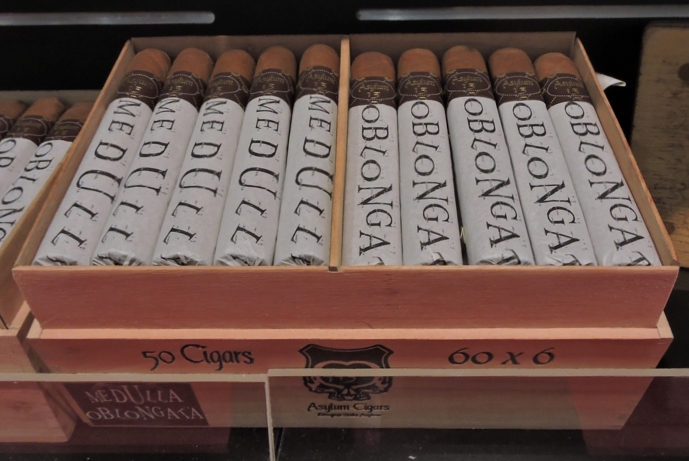 The Corojo wrapper of the Asylum 13 Medulla 52 x 6 had a medium brown color. There wasn’t much oil on the surface of the wrapper.  At the same time, while there were some visible veins, this was a smooth wrapper. As for the wrapper seams, most were well-hidden. 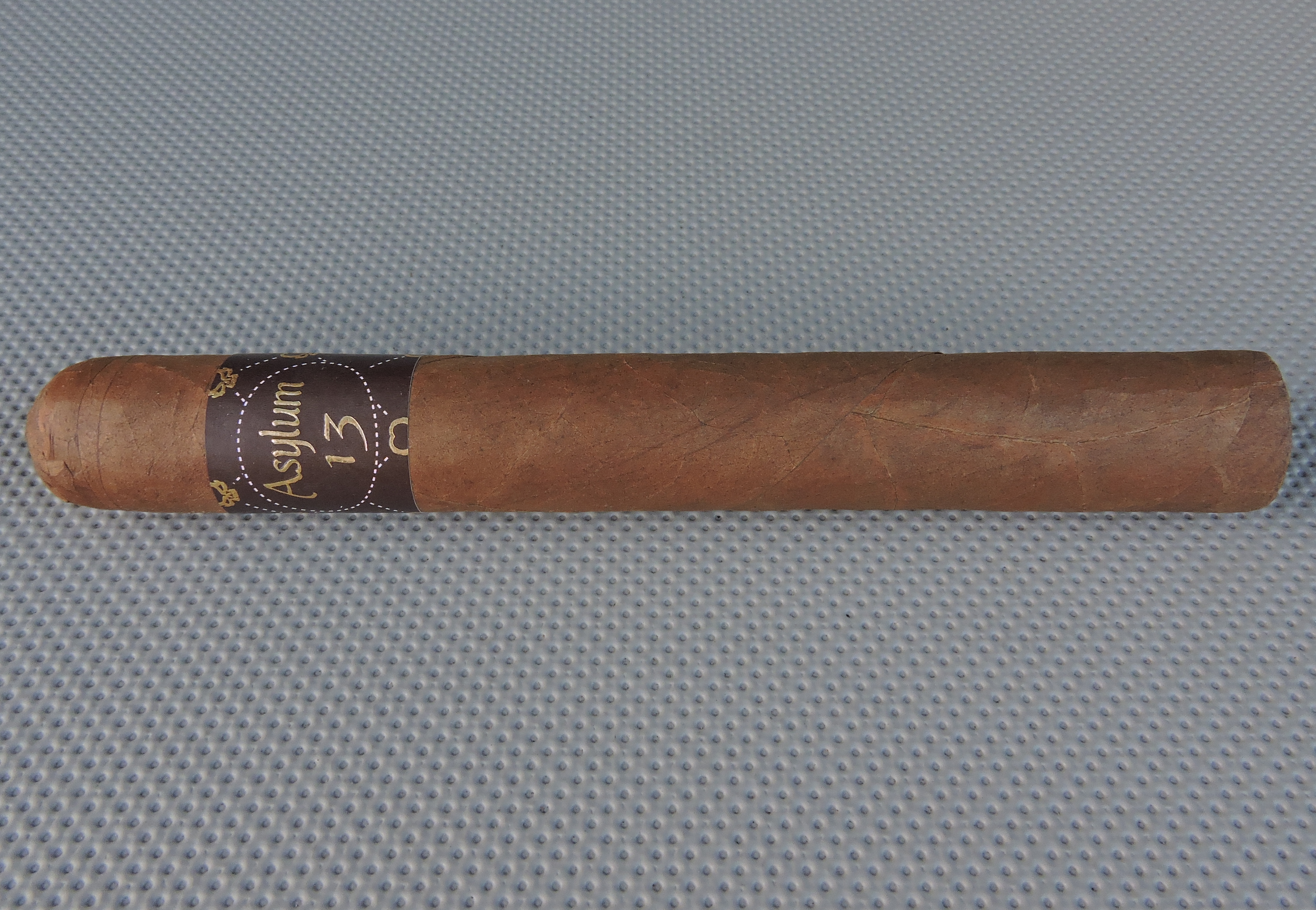 Each cigar has a white tissue sleeve. On the Medulla cigar is the text “MEDULLA” on the tissue sleeve while on the Oblongata is the text “OBLONGATA” on the sleeve – both in black font. The tissue paper is used in place of cellophane. One reason for this is Asylum Cigars co-owner Christian Eiroa has been on the record for his dislike of cellophane.

As I normally do, I went with my usual choice of a straight cut to remove the cap of the Asylum 13 Medulla 52 x 6. Once the cap was removed, I proceeded with the pre-light draw. The dry draw delivered a mix of earth and cedar with a hint of natural tobacco sweetness. I considered this to be a satisfactory pre-light draw. At this point, I was ready to light up the Asylum 13 Medulla 52 x 6 and see what the smoking phase would have in store.

The combination of earth and cedar continued at the start of the Asylum 13 Medulla 52 x 6. As the cigar burned through the first third, some natural tobacco sweetness surfaced in the background. Meanwhile, the retro-hale produced a layer of black pepper.

Later in the first third, the cedar notes increased in intensity and by the second third, the cedar displaced the earth notes in the forefront. The earth joined the natural tobacco as a secondary note. Some black pepper also surfaced at the start of the second third. This note increased in intensity and by the midway point, the pepper was the most prominent of the secondary notes.

The last saw the pepper and cedar notes in the forefront. While these notes were on the spicier side, the spice with the cigar was never overpowering. The notes of natural tobacco and earth helped offset some of the spice. This is the way the smoking experience of the Asylum 13 Medulla 52 x 6 came to a close. The resulting nub was slightly soft to the touch, but cool in temperature.

Construction-wise,  the Asylum 13 Medulla 52 x 6 was solid. This reflected nicely on the score of the burn and draw. The burn line and burn path remained straight from start to finish with only occasional touch-ups needed. As for the ash, it was firm with a nearly white color to it. The burn rate and burn temperature were ideal. 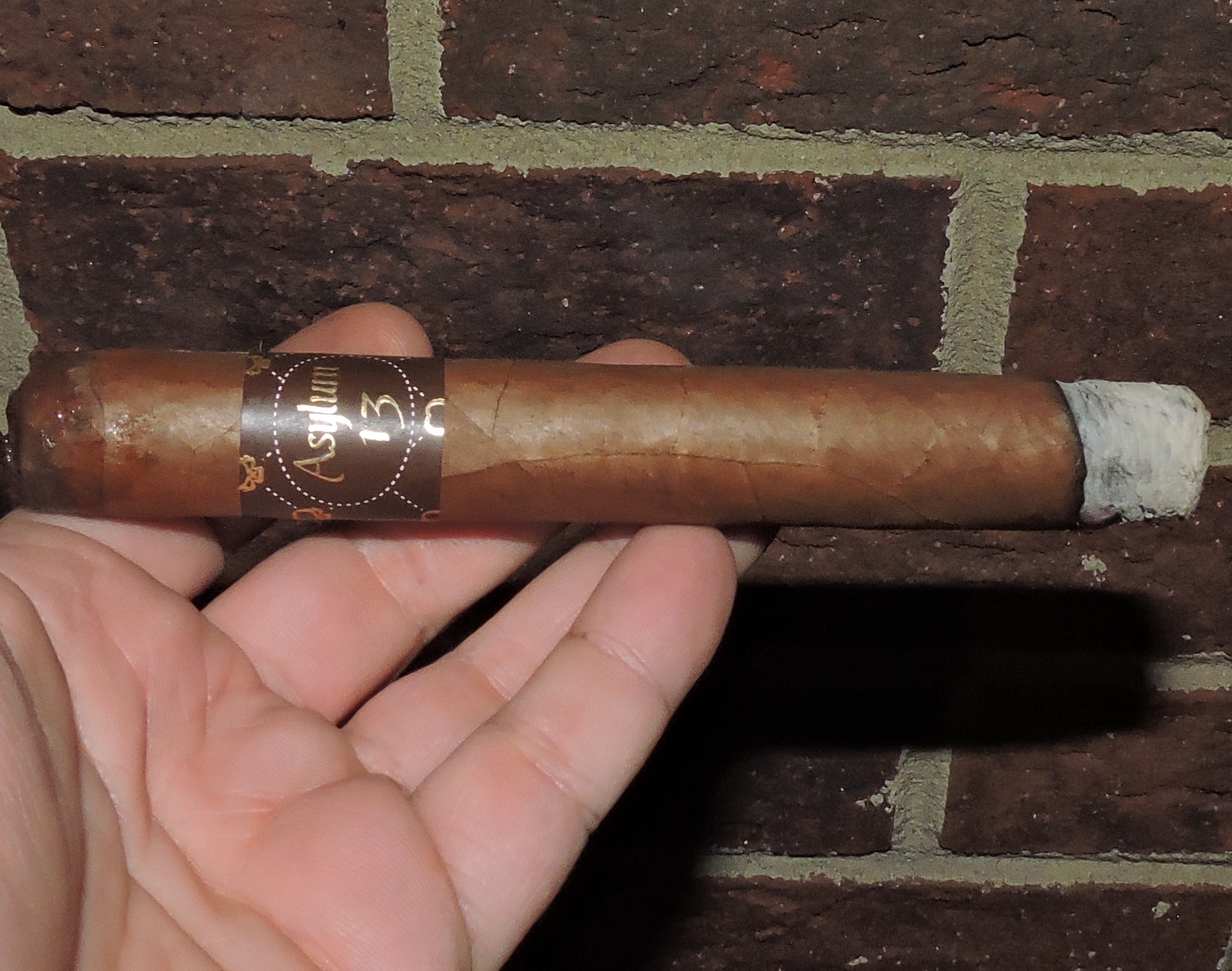 The draw also performed well. It had a touch of resistance with is something that I like. In my book, this made for an enjoyable cigar to puff on.

The Asylum 13 Medulla 52 x 6 started out on the upper end of mild to medium strength and body. As the cigar experience progressed, there was a slow and methodical increase in the intensity of both attributes. Toward the end of the first third, both attributes had progressed to medium. The increase in intensity continued right until the end, but by the end of the cigar, the Asylum 13 Medulla 52 x 6 was still in the medium range.

Flavor-wise, the Asylum 13 Medulla 52 x 6 didn’t have an overly complex profile, but the flavors were very good and there was still enough going on to keep me interested in the smoke.. With the higher priming wrapper, I was expecting a little bit of a bolder smoke from the Asylum 13 Medulla.  However, this should not be construed as a negative. Overall, this was a satisfying cigar by Asylum. It’s a cigar I could recommend to either the novice or experienced cigar enthusiast. As for myself, this is a cigar I would smoke again – and one worthy of having multiples in the humidor.