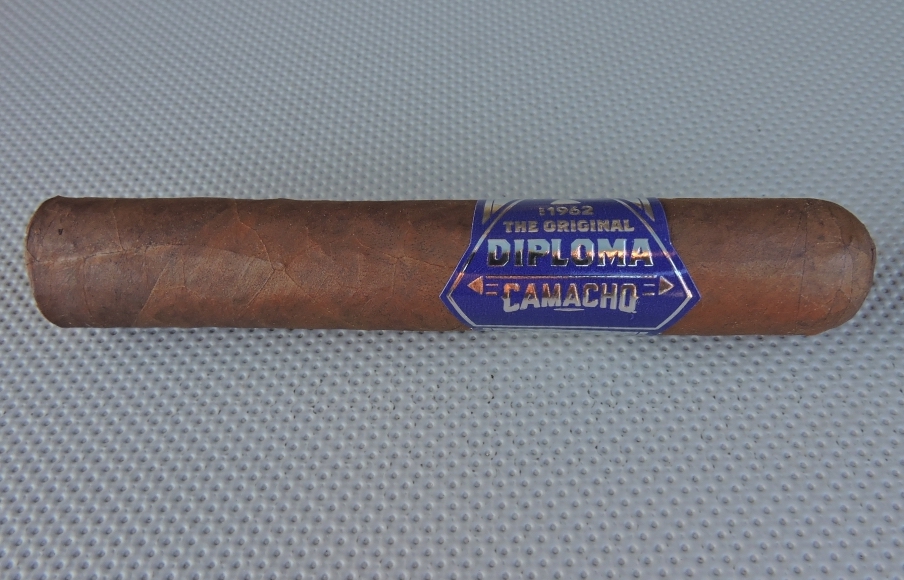 While the Camacho Diploma returns to its roots with its original blend, the cigar features all new packaging. Each cigar is packaged in a unique triangular shaped coffin. 18 coffins are packaged in boxes and in a unique hexagon-shaped box. 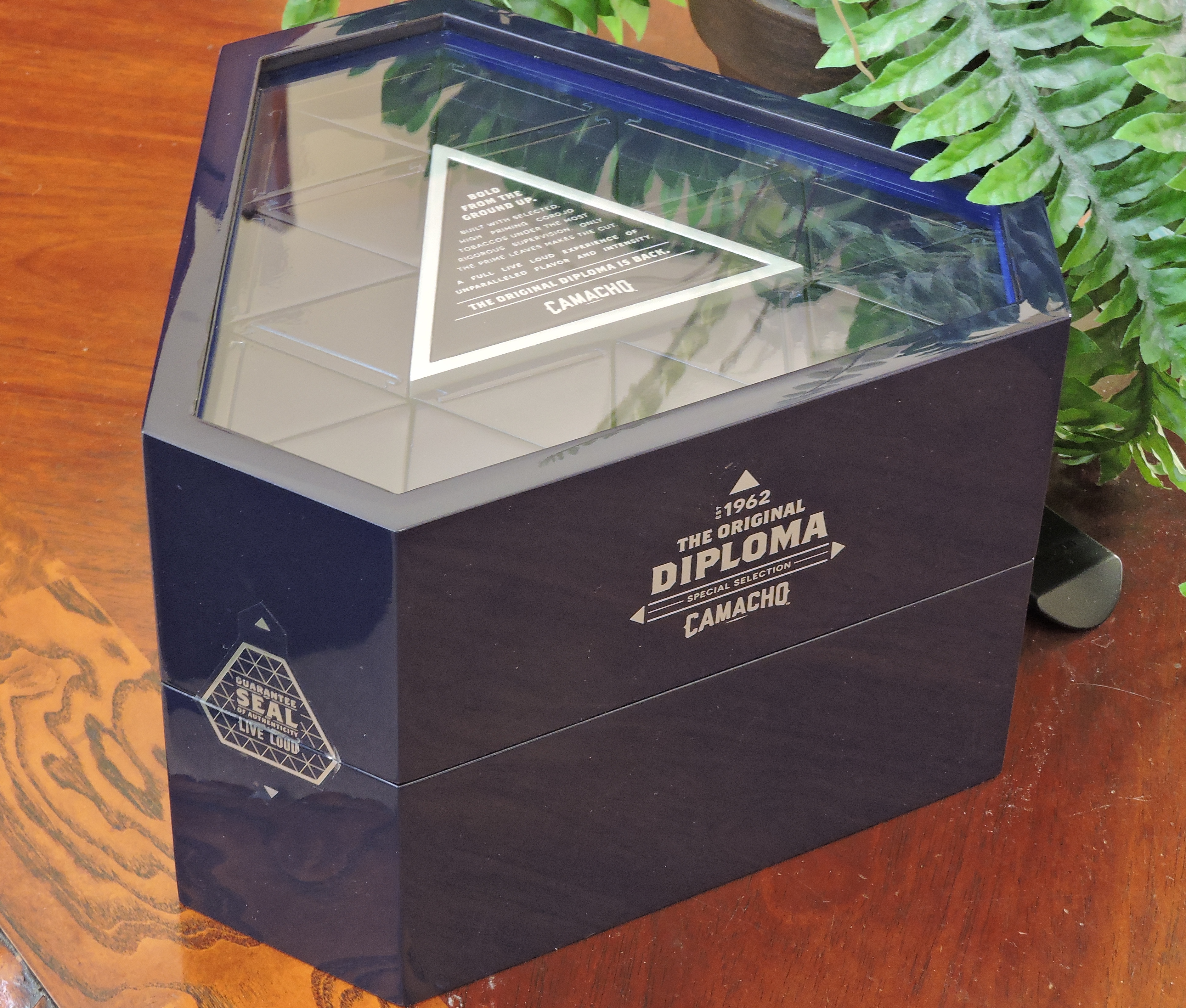 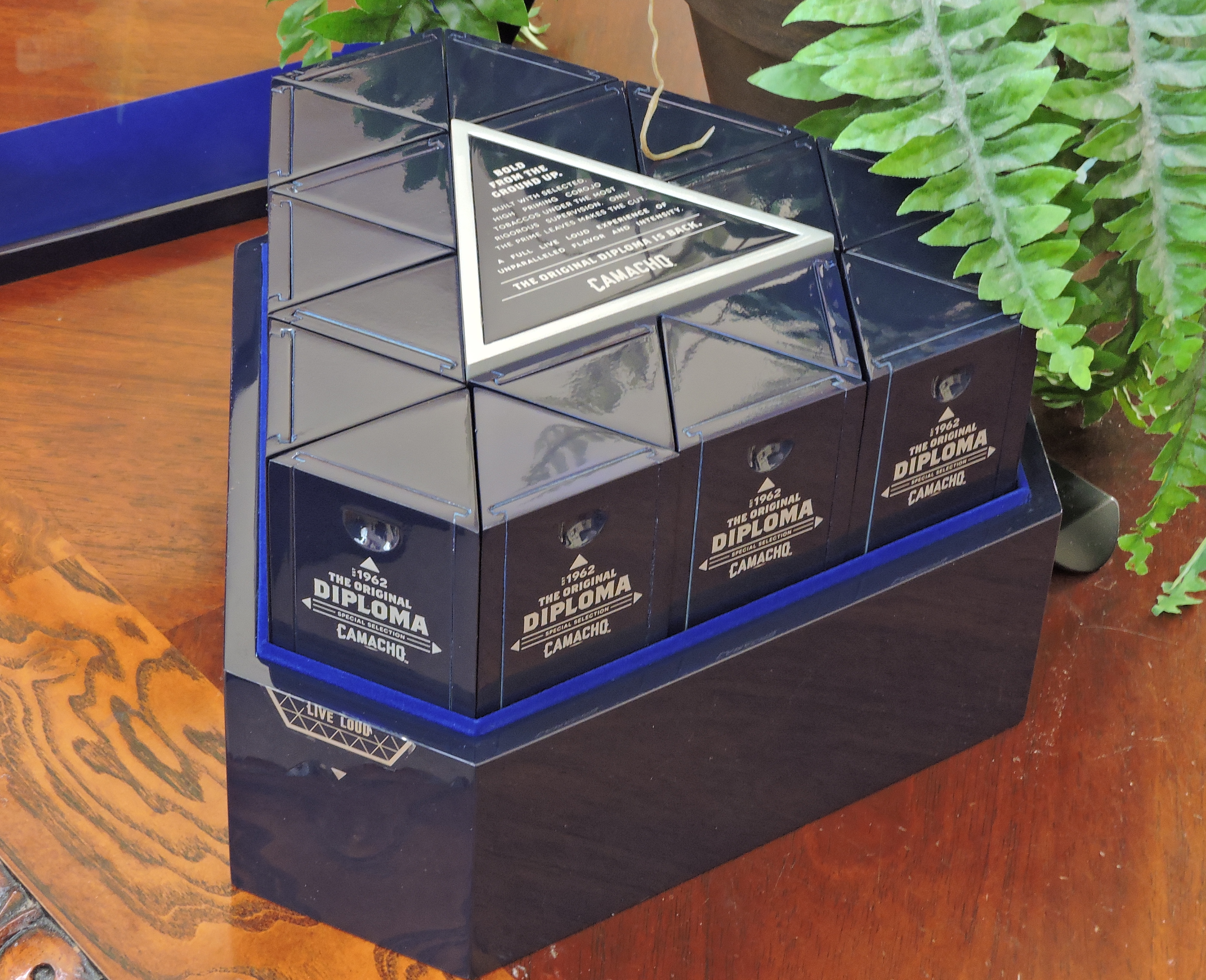 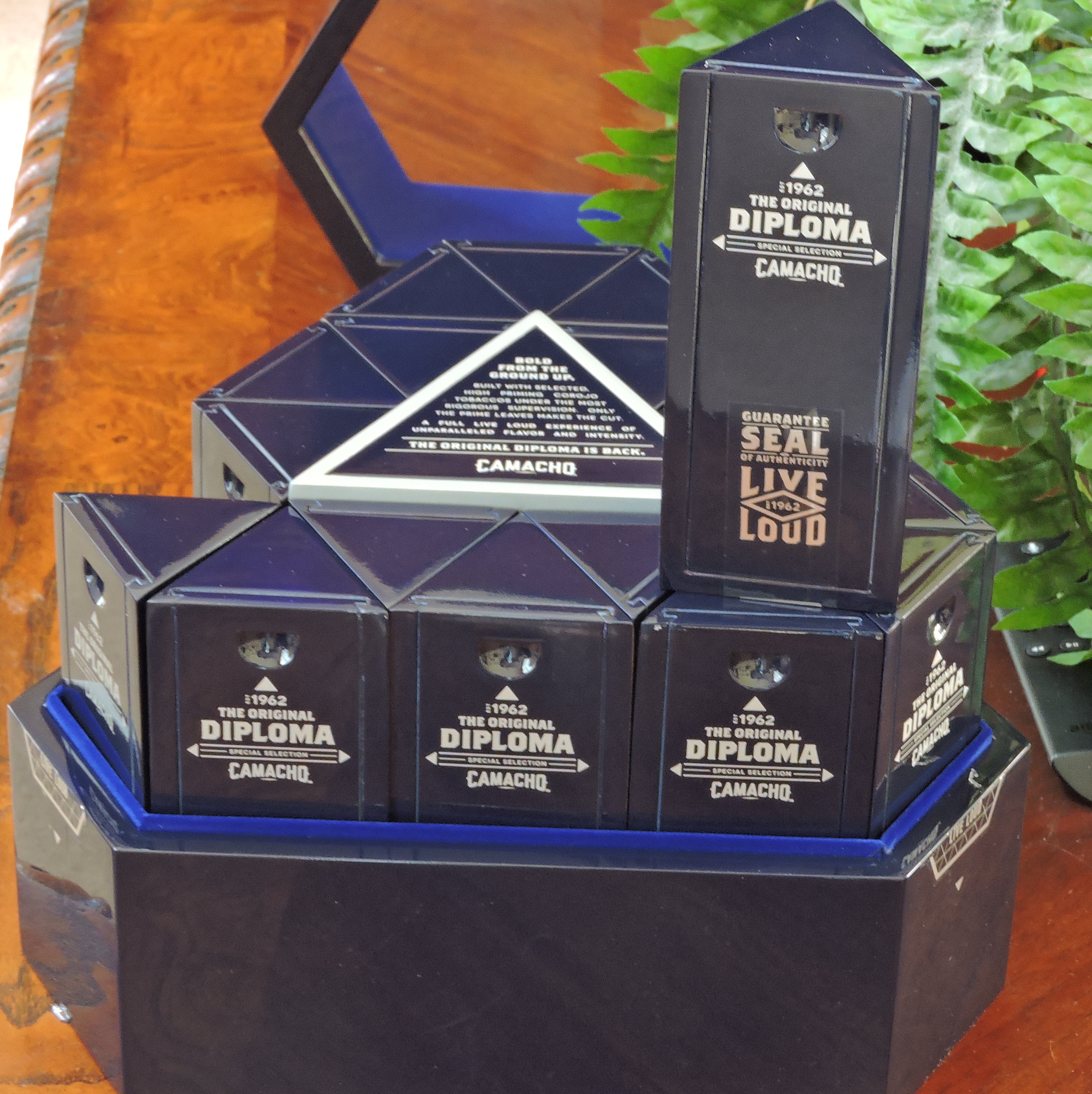 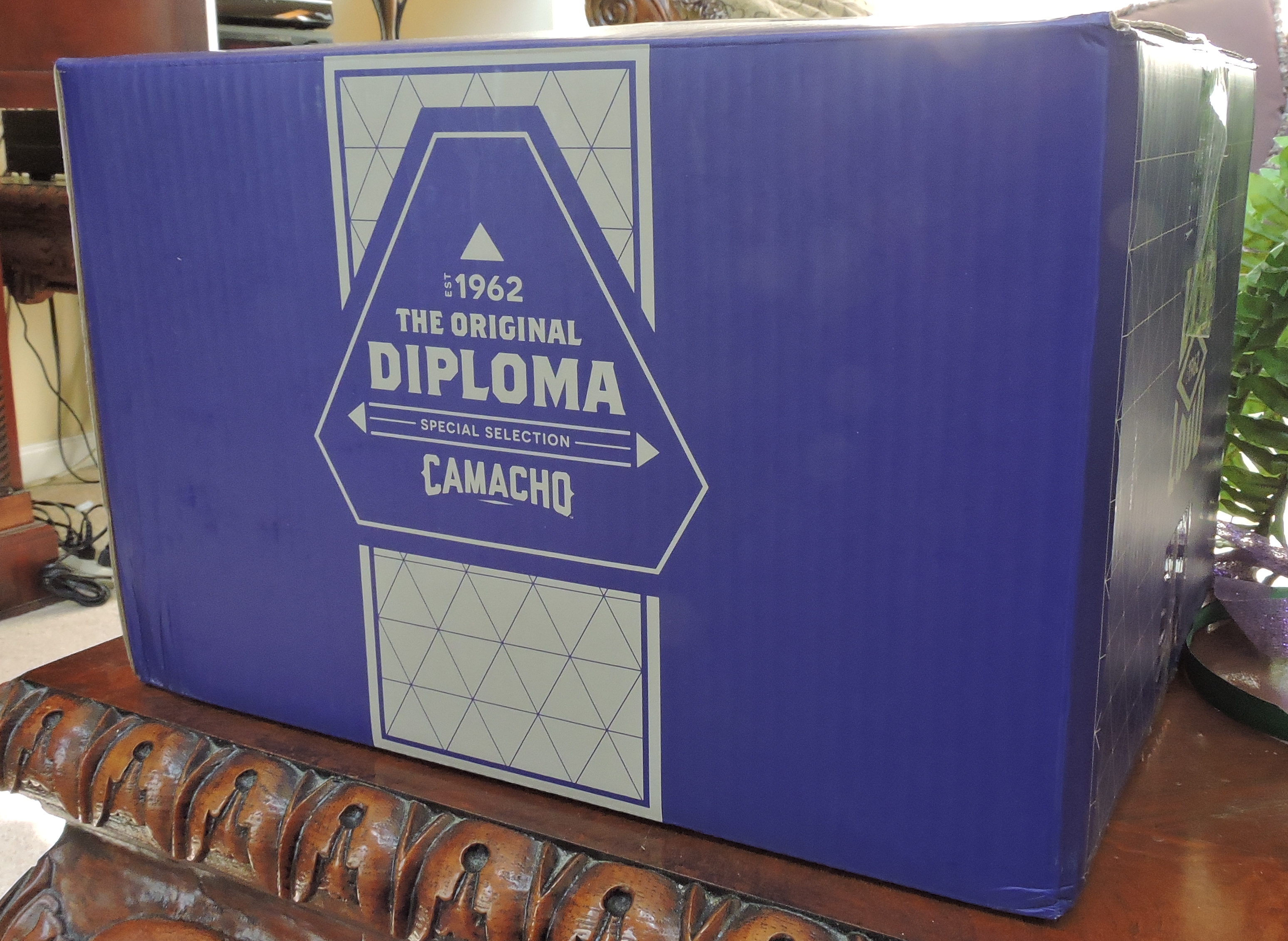 Without further ado, let’s break down the Camacho Diploma Special Selection Robusto and see what this cigar brings to the table.

As mentioned above, the blend of the Camacho Diploma Special Selection Robusto is 100% Original Corojo from Honduras and features high priming tobaccos. The cigar was produced at Camacho’s new Diadema Cigars de Honduras SA facility in Honduras.

As mentioned the cigars are packaged in 18-counthexagon-shapedd boxes. A total of 1,800 boxes have been produced. 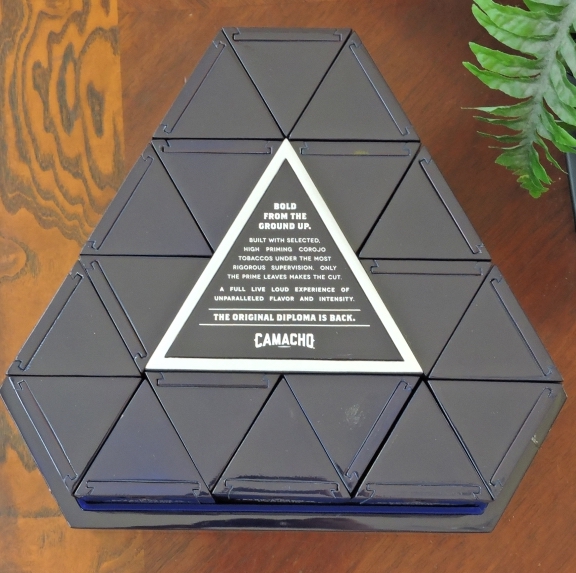 The Original Corojo wrapper of the Camacho Diploma Special Selection Robusto had a medium brown color. Upon closer examination, there was some subtle mottling on the wrapper. I didn’t find much in the way of oil on the surface. There were some visible veins and any wrapper seams were on the thin side. 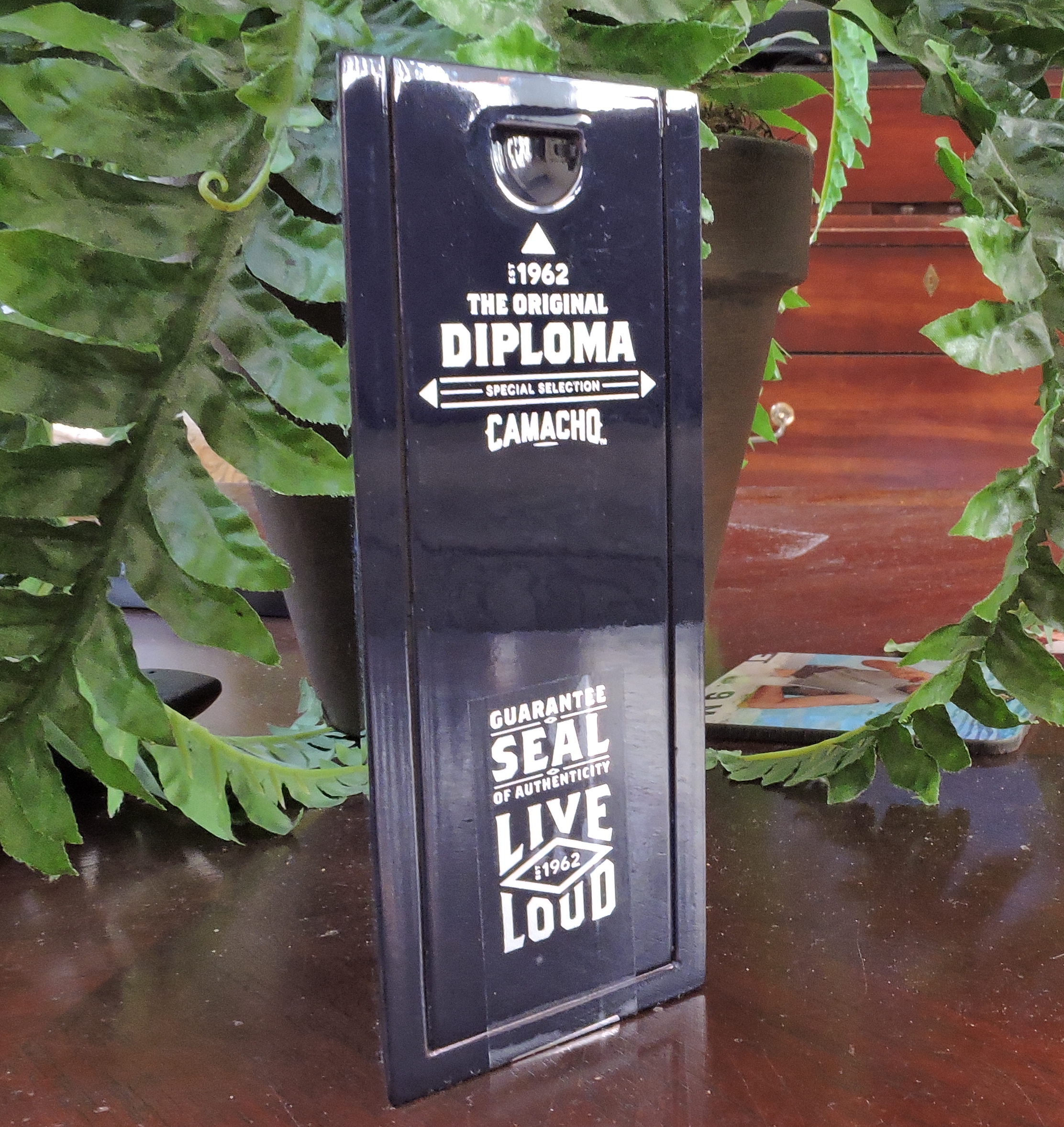 The band to the Camacho Diploma Special Selection is indigo with chrome colored font. The band is arranged in landscape mode with the text “SPECIAL SELECTION” at the top. The middle of the band has a hexagon shape (similar to the box) with the text “EST 1962 THE ORIGINAL DIPLOMA” with Camacho logo below it. Surrounding it is a pattern of chrome-colored triangular shapes that represent the coffin.

After removing the Camacho Diploma Special Selection from the triangular coffin, I removed the cellophane and clipped the cap. I then proceeded to the pre-light draw. The dry draw delivered a mix of wood, berry, and natural tobacco flavors. Overall, I considered this to be a very good pre-light draw. At this point, I was ready to light up the Camacho Diploma Special Selection and move on to the smoking phase.

The Camacho Diploma Special Selection continued with the wood, natural tobacco, and berry notes that were originally detected on the pre-light draw. In addition, there were some red pepper notes that surfaced. It didn’t take long before the red pepper and natural tobacco notes moved into the forefront. Meanwhile, the wood and berry notes settled into the background. At the same time, there was a subtle additional layer of red pepper on the retro-hale.

Toward the later part of the first third, the natural tobacco moved into the forefront. During this time the berry and red pepper notes floated in and out of the forefront with the wood notes remaining in the distant background. As the smoking experience passed the midway point, the berry sweetness started to diminish.

When it came to burn, the Camacho Diploma Special Selection performed quite well.  While there was a slight amount of curvature on the burn line, the cigar had no trouble maintaining a straight burn path. On top of that, I didn’t find this cigar needed an excessive amount of touch-ups. The resulting ash had a light gray color. The ash wasn’t overly tight, but it was not a loose or flaky ash either. The burn rate and burn temperature were both ideal. 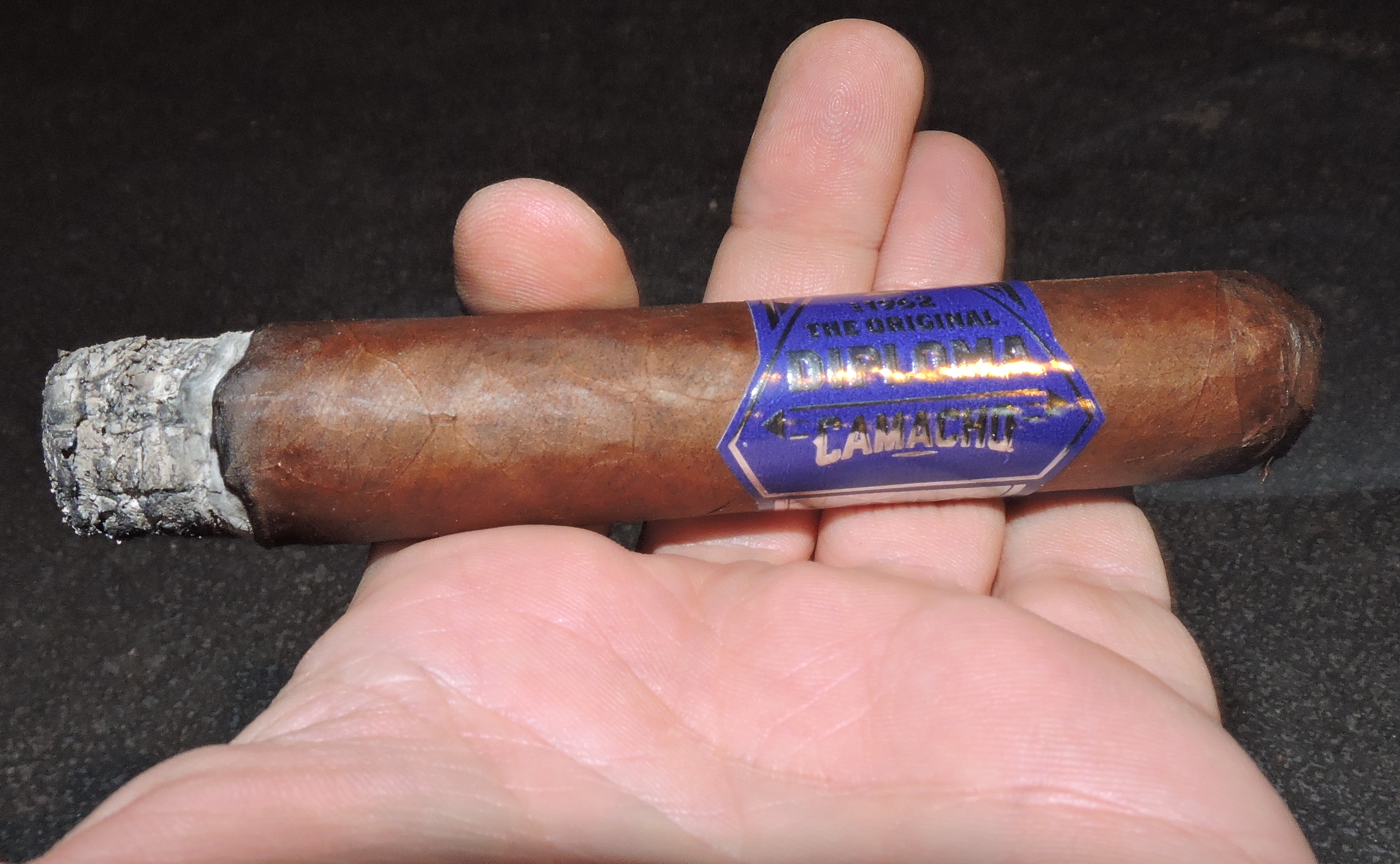 The draw to the Camacho Diploma Special Selection was what I term “open”, but it was not loose. I also found this cigar produced an ample amount of smoke.

The Camacho brand under Davidoff has become known for its “bold standard” when it comes to the cigars in its portfolio. The Diploma Special Selection holds true to this reputation. Out of the gate, the Camacho Diploma Special Selection started out medium to full in strength before progressing to full strength in the second half. Meanwhile, the flavors of this cigar came out of the gate full-bodied. Along the way, I found the body progressed further into full-bodied territory.

In terms of strength versus body with the Diploma Special Selection, I gave a slight edge to the body.

I think there are times consumers will often be lured to a cigar because of the packaging. Make no bones about it, the Camacho Diploma Special Selection packaging is catchy. Between the triangular coffins, hexagon housing box, and indigo bands, it is hard not to be impressed. The good news is that inside the packaging is a very good cigar. It’s a cigar that has a lot of the old school flavors that I remember from some of the powerhouse Camacho Cigars from the Eiroa days. I don’t think its fair to say this smokes exactly the same, but it is in a similar wheelhouse. The negative is that this is a very expensive Robusto – coming in at $20.00 per cigar.  In the end, this is a cigar I would recommend to the seasoned cigar enthusiast – and it’s certainly one I’d smoke again as well. It’s worth buying at least one.