The Epic Habano is the third regular production line to be released by Epic Cigars. The line made its official debut at the 2014 IPCPR Trade Show in Las Vegas. Epic Cigars was founded and is owned by Dean Parsons. Parsons had been working in the real estate business in the Turks & Caicos Islands. During his time in the Caribbean, he made several trips to the Dominican Republic. This allowed him to convert his passion for cigars into a full-time business. Since launching, Epic Cigars has enjoyed a strong following in the U.S. as well as in Germany. Today we take a closer look at the Epic Habano in the Robusto size.

At press time, Parsons has four regular production lines: Epic Habano, Epic Corojo, Epic Maduro, and La Rubia (Connecticut Shade). He also has two limited edition lines: Epic Maduro Fuerte and Project E. Finally, he has a line called Smoking Shields which is a collaborative project for the Smoking Shields club which is a non-profit organization that raises money for those who serve in law enforcement and their families.

To produce his cigars, Parsons works with the Charles Fairmorn factory. This is a factory located in the Dominican Republic run by Rolando Villamil. While the factory produces some of its own cigar brands as well as many private label brands, the factory is best known for producing the lion’s share of the cigars in Glen Case’s Kristoff portfolio.

Without further ado, let’s break down the Epic Habano Robusto and see what this cigar brings to the table:

The blend to the Epic Habano is a four-country multi-national blend. In addition to an Ecuadorian Habano wrapper, the blend incorporates Cameroon, Dominican, and Nicaraguan tobacco leaves.

Each of the sizes of the Epic Habano is available in 20-count boxes.

The Ecuadorian Habano wrapper of the Epic Habano Robusto had a dark cinnamon color almost reminiscent of the wrapper shade seen on the Davidoff Nicaragua. There was also mottling on the surface of the wrapper as well as some oil.  The darker shade of the wrapper did a decent job at hiding the wrapper seams. While there were some visible veins, I still found this to be a cigar with a smooth surface.

Resting just below the primary band is a black secondary band. On the center of the band is the text “HABANO” in orange font with a gold pinstripe just above and below the text.

Prior to lighting up the Epic Habano Robusto, I used a straight cut to remove the cap. After the cap was clipped, I moved on to the pre-light draw. The cold draw produced a combination of cedar and sweet natural tobacco. Overall I considered this to be a satisfactory pre-light draw. At this point, I was ready to light up the Epic Habano Robusto and see what the smoking phase would have in store.

Later in the first third, a grainy note surfaced in the background. As the Epic Habano Robusto moved through the second half, I found this grainy note to slowly build up in intensity. While the natural tobacco notes remained in the forefront, they did start to shed some of the sweetness. Meanwhile, there still were notes of black pepper floating in and out of the forefront. The cedar notes remained in the more distant background.

By the last third, the grainy notes became more bread-like. These notes joined the natural tobacco notes in the forefront. The natural tobacco had some bitterness to it, but it didn’t prove to be overwhelming. There still were some notes of pepper present in the close background. This is the way the cigar experience of the Epic Habano Robusto finished up. The resulting nub was slightly soft to the touch and cool in temperature. 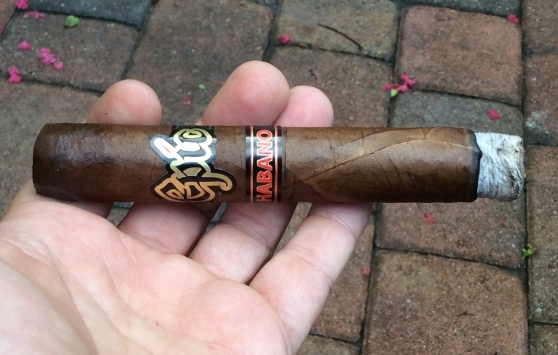 Burn of the Epic Habano Robusto

The draw to the Epic Habano Robusto also performed quite well. I found this was a cigar that had a nice balance of openness and resistance. This was also a low maintenance cigar to derive flavor from.

During the smoking experience, I found both the strength and body to balance each other nicely with neither attribute overshadowing the other.

I’ve heard a lot of good things about the work that Parsons has been doing with his brand and earlier this year, I’ve had the opportunity to explore the various lines. Overall, I have found he has a solid portfolio and no doubt the Epic Habano blend is one of the contributing factors.  The flavor profile of the Epic Habano Robusto was well-balanced – not going overboard on sweetness and not going overboard on spice. Simultaneously, this is definitely a cigar I would recommend retro-haling as it will give you the full experience of the Epic Habano Robusto has to offer. This is a cigar I would recommend to any cigar enthusiast – whether novice or experienced. As for myself, this is a cigar I’d smoke again – and I’d buy multiples to keep in my humidor.