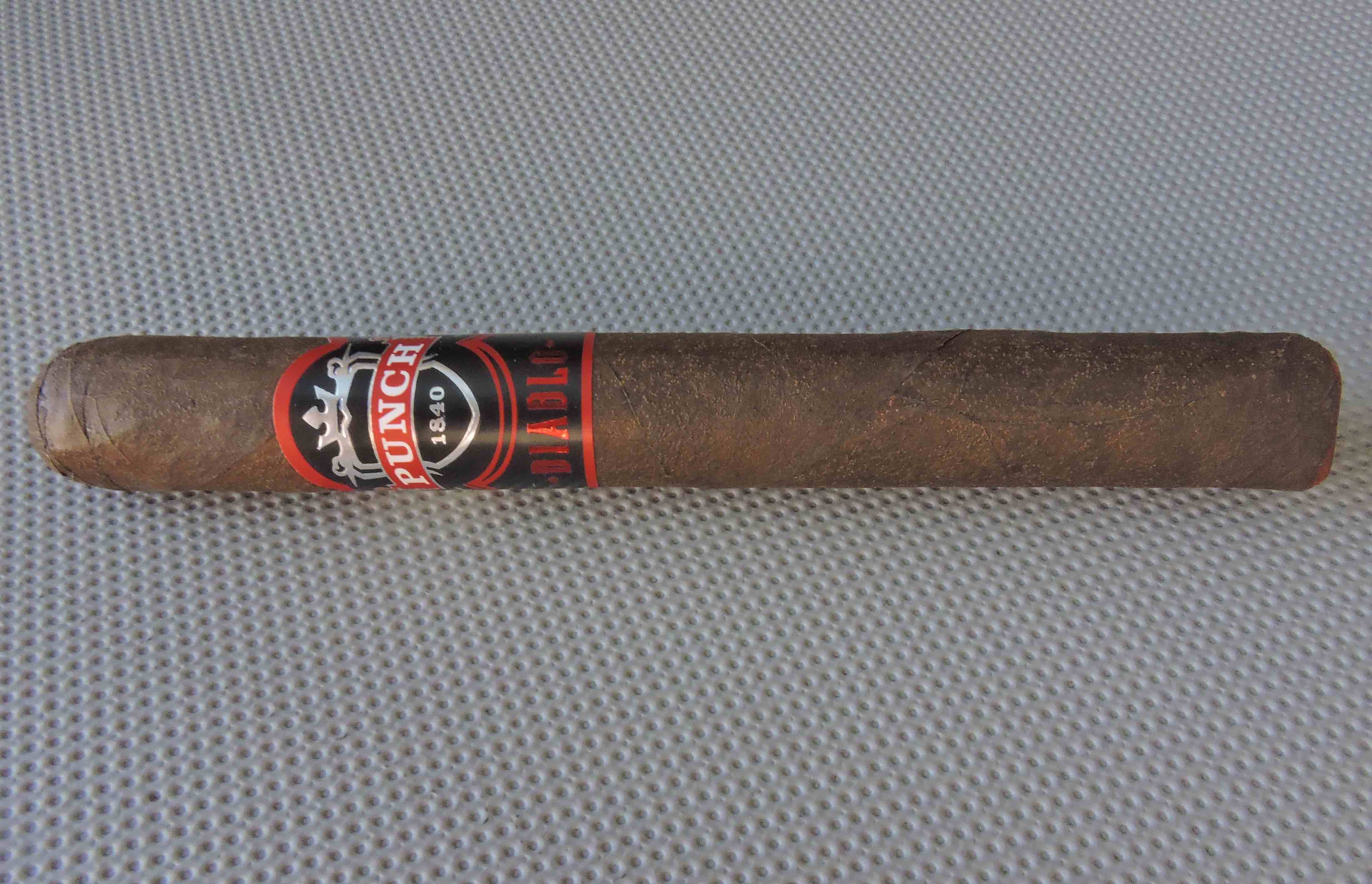 Over the past two years, AJ Fernandez has had the opportunity to put his own footprint on a series of legendary Cuban brands that have non-Cuban versions sold in the U.S. market. These brands include: Montecristo, Romeo y Julieta, H. Upmann, Gispert, Hoyo de Monterrey, Ramon Allones, and Punch.  For the Punch brand, Fernandez developed a cigar line called the Punch Diablo. Featuring an Ecuadorian Sumatra Oscuro wrapper, this is a blend that is being positioned to be a bolder cigar under the Punch line. Today we take a closer look at the Punch Diablo in the Scamp (Toro) size.

When it comes to the name Diablo, it is not new to General Cigar. About a decade ago, General had released a brand called Diablo. Ironically the Diablo brand featured a Sumatra wrapper – which is also used in the Punch Diablo. The Diablo brand would prove to be short-lived, however, in 2015 a 6 1/2 x 66 square-press line extension to the annual limited Punch Rare Corojo line was released called El Diablo. The Rare Corojo El Diablo would also use an Ecuadorian Sumatra wrapper.

In addition, this is also not the first time that General Cigar has released a bolder blend under the Punch brand. In 2009, the Punch Upper Cut made its debut – a cigar that we found to be in the medium to full range in terms of boldness. This cigar also used an Ecuadorian Sumatra.

Without further ado, let’s break down the Punch Diablo Scamp and see what this cigar brings to the table.

In addition to the Ecuadorian Sumatra Oscuro wrapper, the Punch Diablo uses a Connecticut Broadleaf wrapper and a combination Nicaraguan and Honduran wrapper. Being produced at AJ Fernandez’s Tabacalera Fernandez, this is the first time a Punch cigar from General has been produced outside of Honduras.

Each of the three sizes is offered  in 25-count boxes except for the Brute which is available in 20-count boxes. 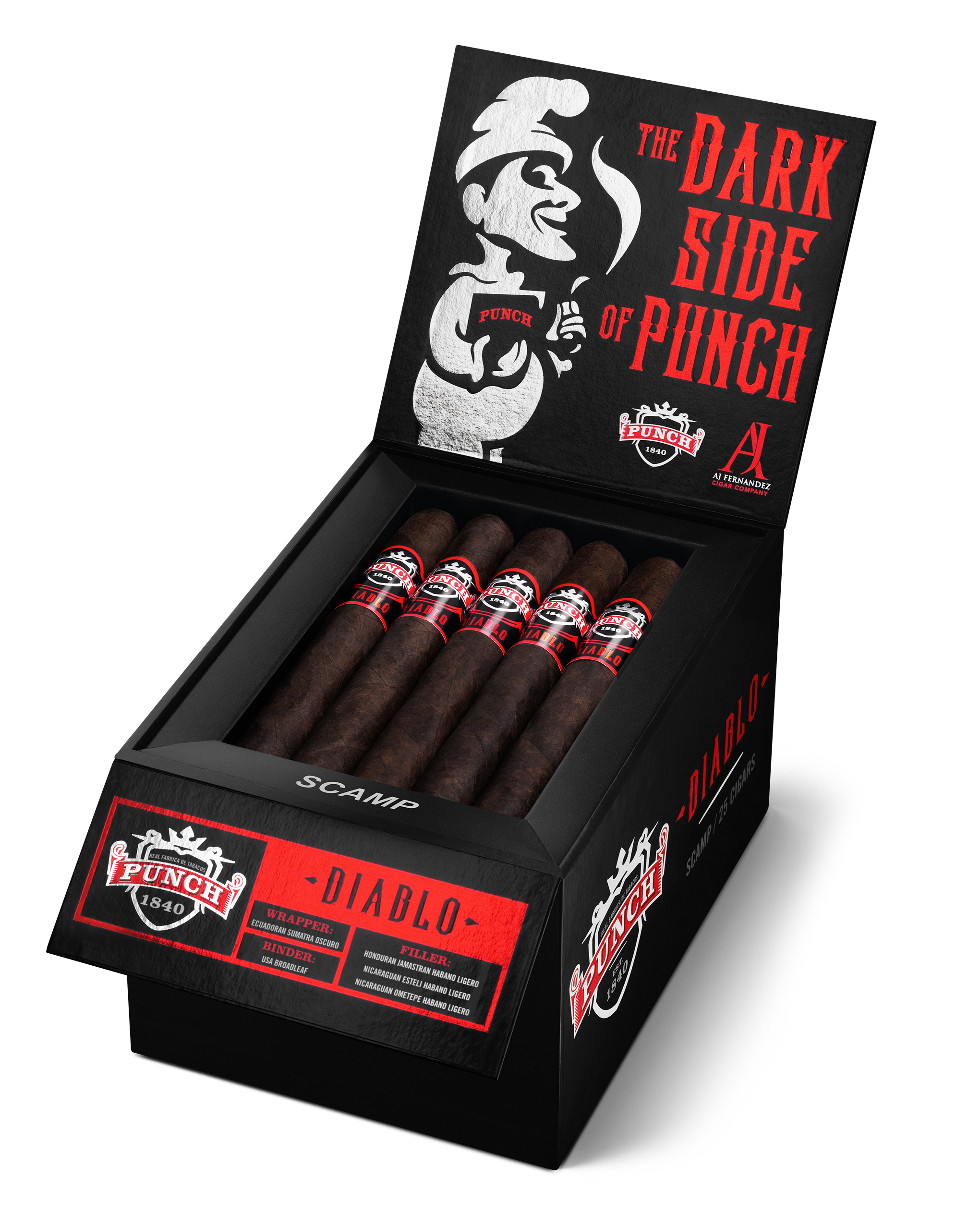 The Punch Diablo Scamp’s Ecuadorian Sumatra Oscuro wrapper definitely fits the bill of being an oscuro. This wrapper has a dark chocolate color. Upon closer examination, there was some mottling on the surface. The wrapper also has a light coat of oil on the surface. While there was some visible wrapper seams and visible veins, this was a relatively smooth wrapper.

The band of the Punch Diablo has a black background. On the center of the band is a silver trimmed shield with a red ribbon design going across it. On the ribbon is the text “PUNCH” in white font. Below the ribbon is the text “1840” in silver font. There are two silver medallions to the left and right of the shield. The lower part of the band has a pseudo-secondary effect. It also has a black background with the text “DIABLO” in red font. The band is finished with red trim and there is also red trim separating the upper part of the band and the pseudo-secondary band.

The cigar experience of the Punch Diablo Scamp started with a straight cut to remove the cap. Once the cap was removed, it was time to commence the pre-light draw. The cold draw delivered notes of mocha (a cross of coffee and chocolate) as well as subtle notes of earth and cedar. I judged this to be a very good pre-light draw. At this point it was time to light up the Punch Diablo Scamp and move on to the smoking phase.

The start of the Punch Diablo Scamp delivered a mix of mocha, classic wood, cedar, white pepper, and earth. Early on the mocha notes became primary with the wood, cedar, pepper, and earth notes settling in the background. By the middle of the first third, the wood notes made an occasional guest appearance in the forefront. Meanwhile, on the retro-hale, there was an additional layer of white pepper.

At the start of the second third of the Punch Diablo Scamp , a slight dried fruit note joined the wood, cedar, pepper, and earth notes in the background. During this stage, the woody notes started to more frequently make an appearance in the forefront. Concurrently the mocha notes shed some of the chocolate characteristics and transitioned to more of a classic coffee note. There also was a nominal increase of the pepper and cedar notes. Later in the second third, the wood notes joined the coffee in the forefront.

The last third of the Punch Diablo Scamp saw the wood notes take over. The pepper and cedar notes became the most prominent secondary flavors of this cigar. Meanwhile, the coffee notes settled into the more distant background with the earth and dried fruit. This is the way the Punch Diablo Scamp came to a close. The resulting nub was soft to the touch and cool in temperature.

The Punch Diablo Scamp is going to deliver one of the better-constructed cigars that fall between a $7.00 to $9.00 price point. This cigar maintained a straight burn path and had a straight burn line from start to finish. The resulting ash was light gray and skewed toward the firmer side. Meanwhile, the burn rate and burn temperature were both ideal. 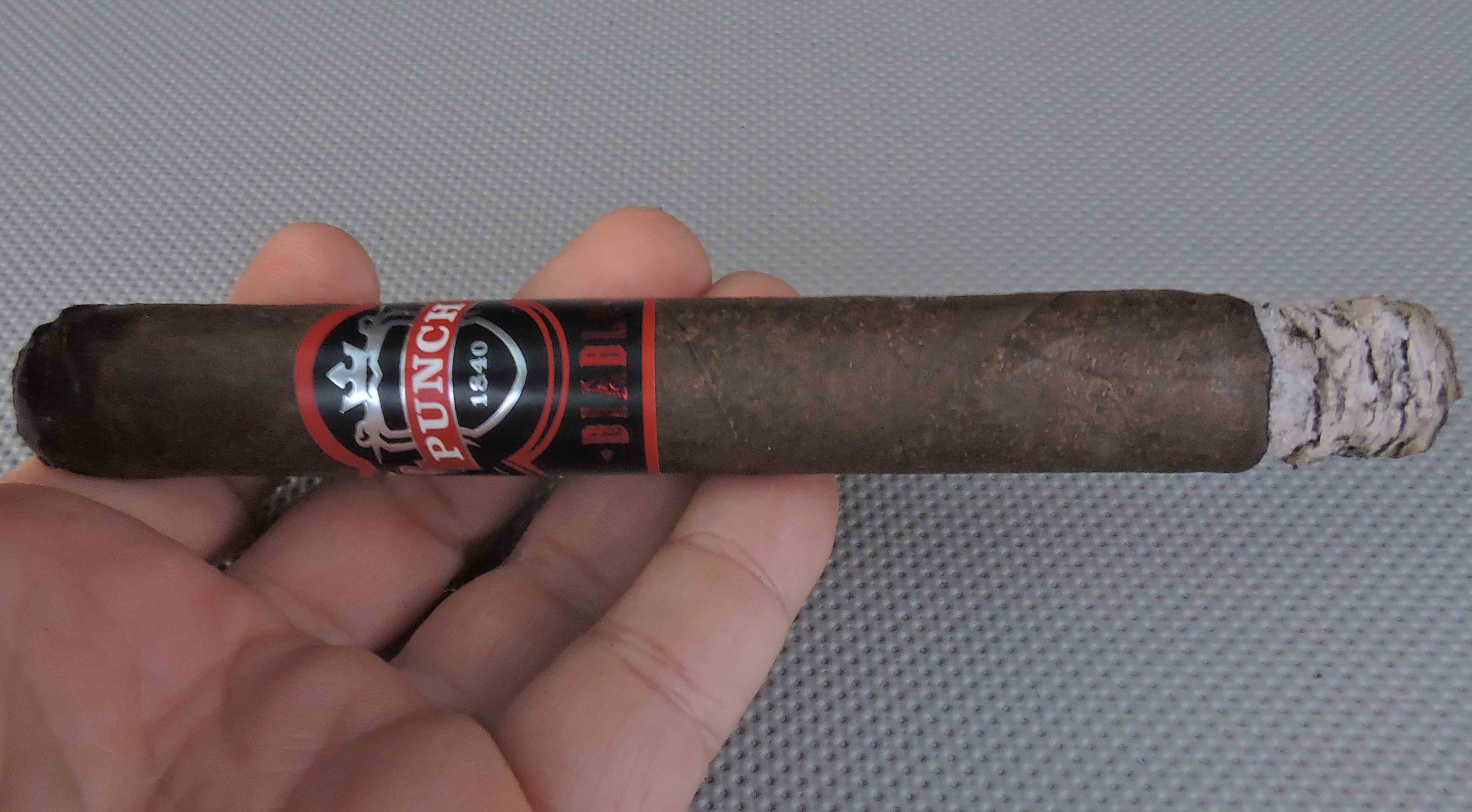 Burn of the Punch Diablo Scamp

The draw to the Punch Diablo Scamp came quite close to perfect each time I smoked this cigar. This cigar had the right resistance level for me while allowing me to get the flavors of the cigar without a challenge. This cigar earns our highest rating for draw – “Exceptional”.

From a strength perspective, the Punch Diablo Scamp came out of the gate medium to full. Along the way, there was a gradual increase in strength, and the cigar came quite close to crossing the threshold into full strength. Meanwhile, the body of the Punch Diablo Scamp started out medium. The body did build up in intensity during the first third and by the second third, it crossed into medium to full territory. Like the strength, the body increased throughout the smoking experience and came close to moving into full-bodied territory.

In terms of strength versus body, I found a slight edge went to the strength – particularly in the first half.

The Punch Diablo Scamp started out very good, but as the cigar experience progressed I found it became more “ordinary and average” – lacking anything in terms of a wow factor. As I mentioned this cigar did have excellent construction – some the best I’ve seen on a cigar in the $7.00 to $9.00 range, but ultimately this plays a smaller factor into the overall score. Finally, I will say this cigar does succeed at bringing to the table a bolder cigar under the Punch brand. If someone is looking for a bolder smoke, at $7.19 it’s still affordable to pick one of these up to smoke. As for myself, I’d probably fall into that category and occasionally reach for one to smoke or possibly squirrel one away and see what longer term aging does for it.