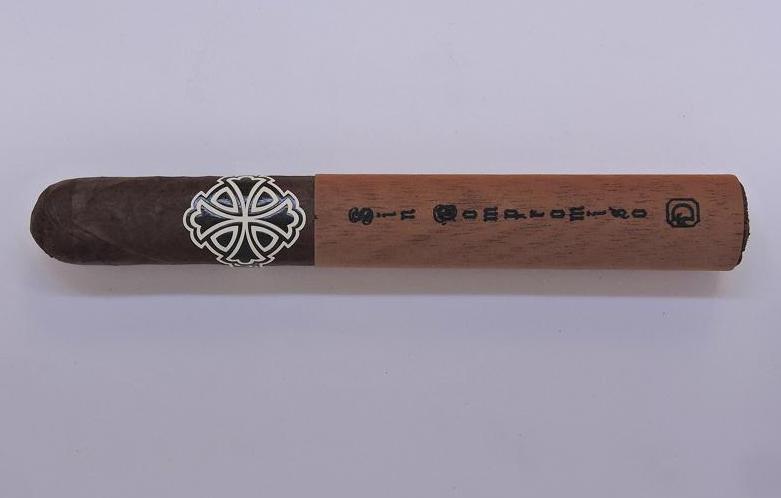 Back at the 2018 IPCPR Trade Show, Steve Saka and Dunbarton Tobacco & Trust introduced a line known as Sin Compromiso. While it was a cigar that had a limited introduction in 2016 just before the U.S. Food and Drug Administration Deeming Rules were put into effect, it wasn’t until two years later that the cigar had a national launch.  Sin Compromiso was significant for Saka for a couple of reasons: First, it would be the first all box-pressed cigar line that Saka would work on; second, it was positioned as being a more premium offering in the portfolio. While Sin Compromiso is not considered a limited edition cigar, it is an ongoing limited production cigar. Today we take a closer look at the Sin Compromiso in the No. 7 (7 x 56) size.

Saka has said Sin Compromiso was the result of working with experimental black tobacco harvests over a three year period from Mexico, Ecuador, and Nicaragua. In terms of putting together the blend, Saka has said Sin Compromiso is the “culmination of his experiences as a cigar blender. When Sin Compromiso was announced Saka said, “The marquee’s name translates to ‘no compromise’ and that is the exact approach I took when creating this cigar. This blend is a direct reflection of all the skills I have learned and developed over the last twenty plus years and I am genuinely excited to share it with my fellow cigar smokers.”

Without further ado, let’s break down the Sin Compromiso Selección No. 2 and see what this cigar brings to the table.

As mentioned, Sin Compromiso utilizes tobaccos from Mexico, Ecuador, and Nicaragua. The cigar is highlighted by its Mexican San Andres wrapper (the first line in the Dunbarton Tobacco & Trust portfolio to use such a wrapper). The cigar is produced at the Joya de Nicaragua factory, a factory Saka has had a long partnership with.

Sin Compromiso is offered in five sizes. Each is presented in 13-count boxes.

The Varita Magica was originally released under the name Selección Espada Estoque. Saka changed the named after he realized Altadis U.S.A. has an offering under that name. 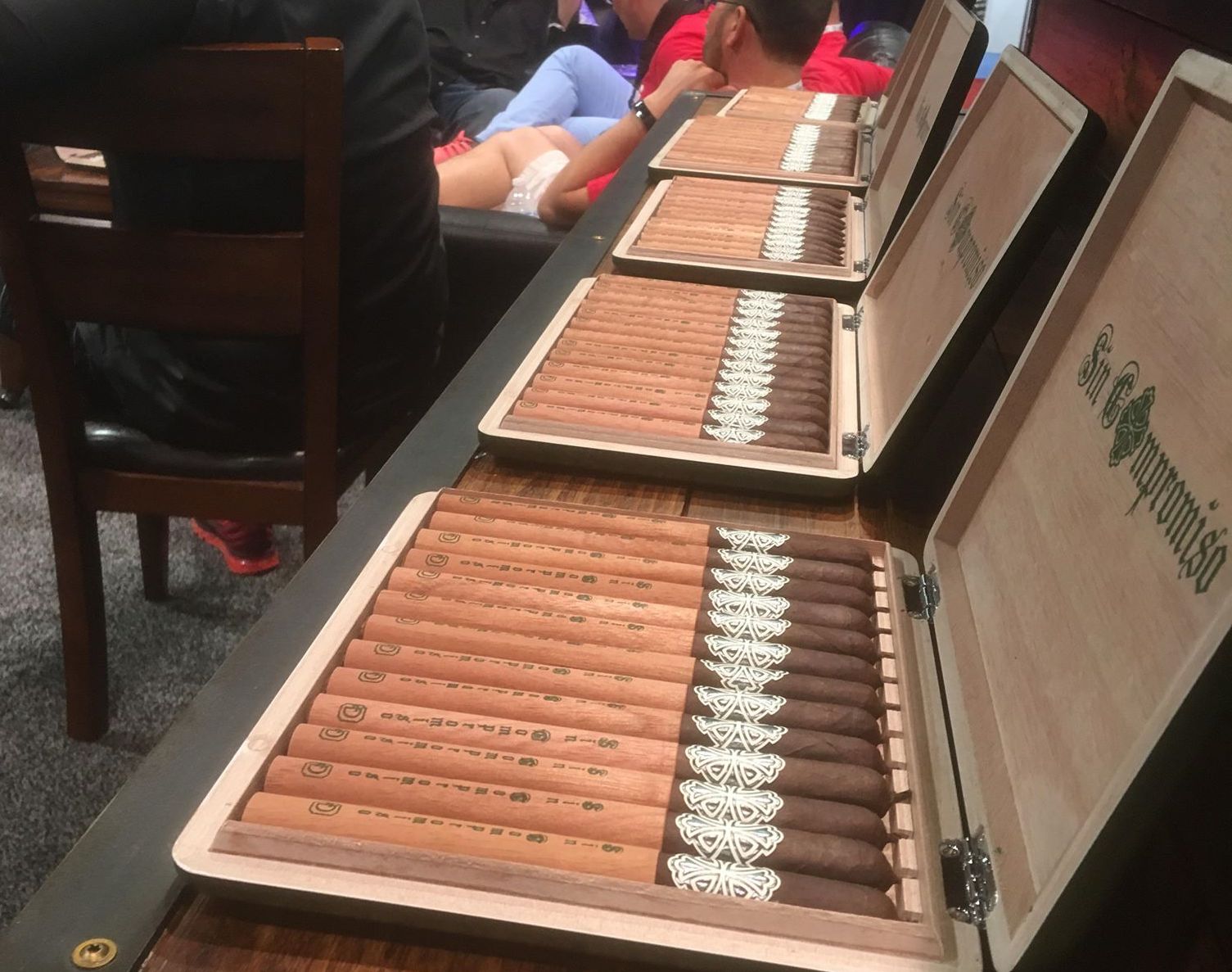 The San Andres Wrapper of the Sin Compromiso Selección No. 7 had a chocolate brown color to it. There was a light sheen of oil on the surface. The wrapper itself had some thin wrapper seams. The darker complexion of the wrapper did a good job at hiding any visible wrapper seams. The cigar itself was a soft box-press.

The band of Sin Compromiso is white with a dark font that is near black in color when looked at under the light. Surrounding the cross is a leaf pattern on the sides of the band. The far right of the band contains the Dunbarton Tobacco & Trust band that serves as a band fastener. 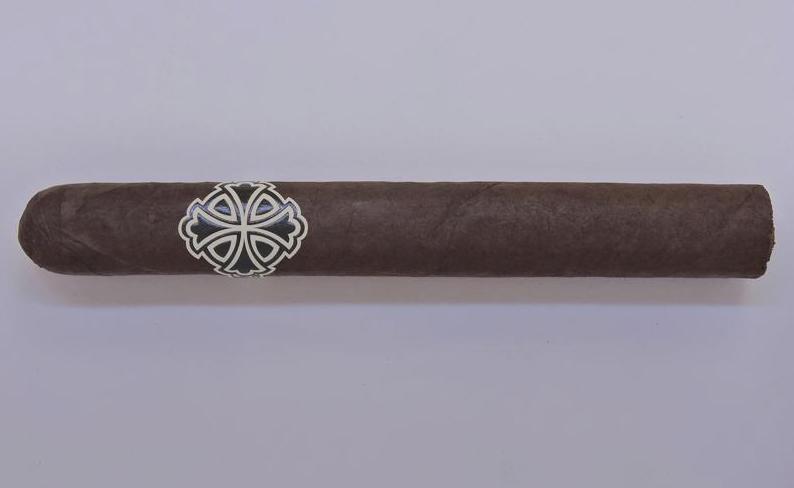 A few people have been asking me about the cross on the Sin Compromiso band. Many people assume it is a Celtic Cross because of the color I chose, but it is not. It is actually a custom variation of the Patonce Cross and is one of the oldest heraldic cross variants. Sometimes called a “cross griffee-de-loup” (wolf-clawed) in medieval blazons.

The Patonce Cross is any form of cross which has expanded ends, like the Pattee Cross, but with each arm terminating in floriated points like the Fleury Cross and Fleur-de-lis Cross. It originates from the County of Aumale which was a medieval fief in Normandy. It’s earliest documented use was found in the coat of arms of the Counts of Aumale c.1244. In heraldry, the three petals at the end of arm represent faith, wisdom and chivalry. The four arms spread these to the four corners of the world.

It is because of this heraldic meaning I chose to use it to represent Sin Compromiso. It is an expression of my faith, the liga is the product of my decades of blending and cigar wisdom and the chivalry is a representation of my commitment to always do my utmost to never compromise on the quality of the liga to all.

Yes, I really do put this much thought into my creations. I know I am crazy… my wife tells me so all the time

There is also a cedar sleeve that covers 3/5 of the cigar from the footer upwards. On the band is the text “SIN COMPROMISO” in a dark green gothic font along with the Dunbarton Tobacco & Trust band in the same color font.

After removing the cedar sleeve from the Sin Compromiso Selección No. 7, a straight cut was used to clip that cap. From that point, it was time to commence the pre-light draw. The dry draw delivered a mix of chocolate, natural tobacco sweetness, and a touch of cedar. This was a very good pre-light draw. After completing the pre-light draw, it was time to light up the Sin Compromiso Selección No. 7 and see what the smoking phase would have in store.

The Sin Compromiso Selección No. 7 started out with a combination of chocolate, cedar, natural tobacco, and earth. It didn’t take long for the chocolate and cedar notes to move to the forefront. The natural tobacco and earth notes settled in the background. Meanwhile, there was a layer of mild red pepper on the retro-hale. About midway through the first third, the red pepper surfaced on the tongue. By this point of the smoking experience, the cedar notes had a slight edge over the chocolate notes.

By the last third, the natural tobacco pretty much joined the cedar in the forefront. There still were some notes of earth and pepper present. For the most part, the cocoa had dissipated. This is the way the Sin Compromiso Selección No. 7 came to a close. The resulting nub was firm to the touch and cool in temperature.

While there was a slight bit of jaggedness from time to time, this was purely cosmetic and overall the Sin Compromiso Selección No. 7 maintained a straight burn path from start to finish. The resulting nub was silver-gray and skewed toward the firmer side. The Sin Compromiso Selección No. 7 maintained an ideal burn rate and ideal burn temperature from start to finish. 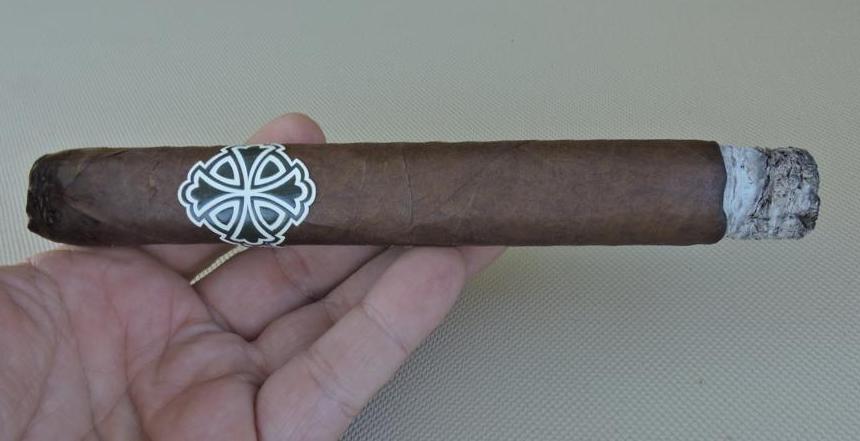 Burn of the Sin Compromiso Selección No. 7

In terms of strength and body, the Sin Compomiso No. 7 was a solid medium. I didn’t find much variance in the intensity levels during the smoking experience. At the same time, I found the strength and body to balance each other nicely with neither attribute overshadowing the other.

I enjoyed the Sin Compromiso Selección No. 7. However, when I weigh this cigar versus other offerings in Dunbarton Tobacco & Trust’s portfolio, it falls short. Yes, Sin Compromiso is good, but I would still put most of the Sobremesa, Mi Querida, and Todos Los Dias ahead of it. It’s not a knock on the Sin Compromiso Selección No. 7, but more of a byproduct of how strong Saka’s brands are. While it doesn’t affect the score, it’s worth noting it does affect the value rating. This is a cigar I’d still recommend to either a novice or experienced cigar enthusiast. As for myself, this is a cigar I would buy one and smoke again on an occasional basis.