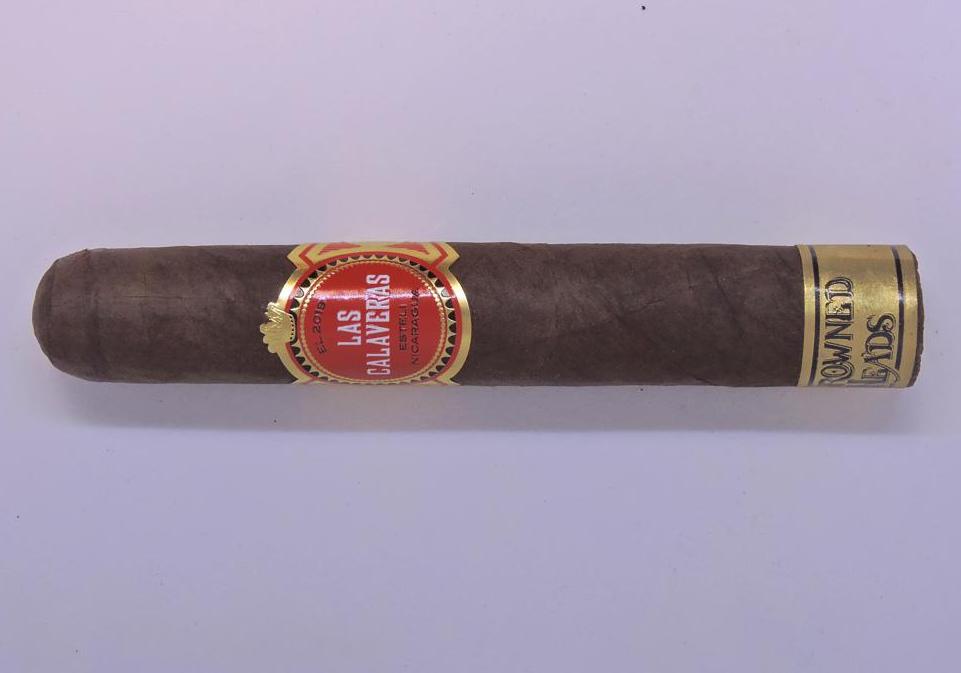 The name “Las Calaveras” translates to “The Skulls”. It is a line that pays homage to those who have passed away over the past year. As opposed to being a mournful symbol, it is intended to be a celebration of those lives and remembrances of those who are no longer with us. In the past, the bands of each release of Las Calaveras have contained the initials of four individuals who have passed away. This year, the cigar contains the initials of one person – the late Cano Ozgener, founder of CAO Cigars who passed away last June. Crowned Heads co-founders Jon Huber and Mike Conder both worked with Ozgener at CAO Cigars.

Without further ado, let’s break down the Las Calaveras Edición Limitada 2019 LC50 and see what this cigar brings to the table. 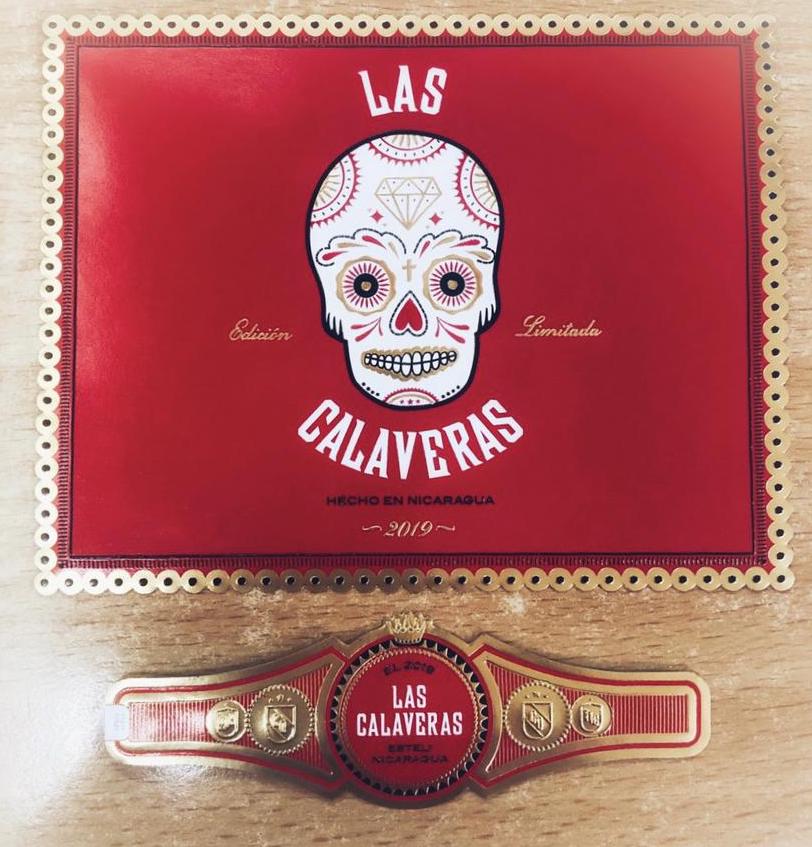 The Ecuadorian Havana Oscuro wrapper of the Las Calaveras Edición Limitada 2019 LC50 had a milk chocolate color to it. Upon closer examination, some darker mottling could be seen on the surface. There wasn’t much in the way of oil on the wrapper. While there were some visible veins and visible wrapper seams, the LC50 had a relatively smooth surface.

For the first time, Las Calaveras features a footer band. This is something that has been seen on several Crowned Heads releases as of late. The band is gold with black font. On the band is the “CROWNED HEADS” name featuring the company’s logo font. Black trim surrounds the text on the upper and lower portion.

A straight cut was used to commence the cigar experience of the Las Calaveras Edición Limitada 2019 LC50. After removing the cap it was on to the pre-light draw. The cold draw delivered a mix of cocoa, leather, and a slight citrus note. Overall this was a satisfactory pre-light draw. At this point, it was time to remove the footer band of the Las Calaveras Edición Limitada 2019 LC50 and await what the smoking phase would have in store.

The Las Calaveras Edición Limitada 2019 LC50 started out with notes of cocoa powder, natural tobacco, citrus, and cedar. During the early stages of the first third, the cocoa powder and natural tobacco moved into the forefront. The citrus and cedar settled in the background with the citrus notes having a slight edge. The retro-hale produced a combination of red pepper and citrus.

By the second third, the natural tobacco notes took sole control as the primary note. During this stage, the natural tobacco developed a savory component and to a lesser extent a slightly bitter note. The bitter note shouldn’t be considered a negative as it helped balance out the flavor profile. The cocoa receded into the background joining the citrus and black pepper. The second third also saw a slight amount of black pepper emerge on the tongue.

The last third saw the natural tobacco remain in the forefront with the savory and bitter components remaining. There was another slight increase in the pepper which remained in the background. Meanwhile the citrus, cedar, and cocoa notes remained distant secondary notes. This is the way the cigar experience of the Las Calaveras Edición Limitada 2019 LC50 closed out. The resulting nub was firm to the touch and cool in temperature.

While there was a slight amount of jaggedness on the burn line, the Las Calaveras Edición Limitada 2019 LC50 had no issues maintaining a straight burn path. The resulting ash had a mostly silver gray color. This wasn’t an overly firm ash and at times had some minor flaking. Meanwhile the burn rate and burn temperature were both ideal. 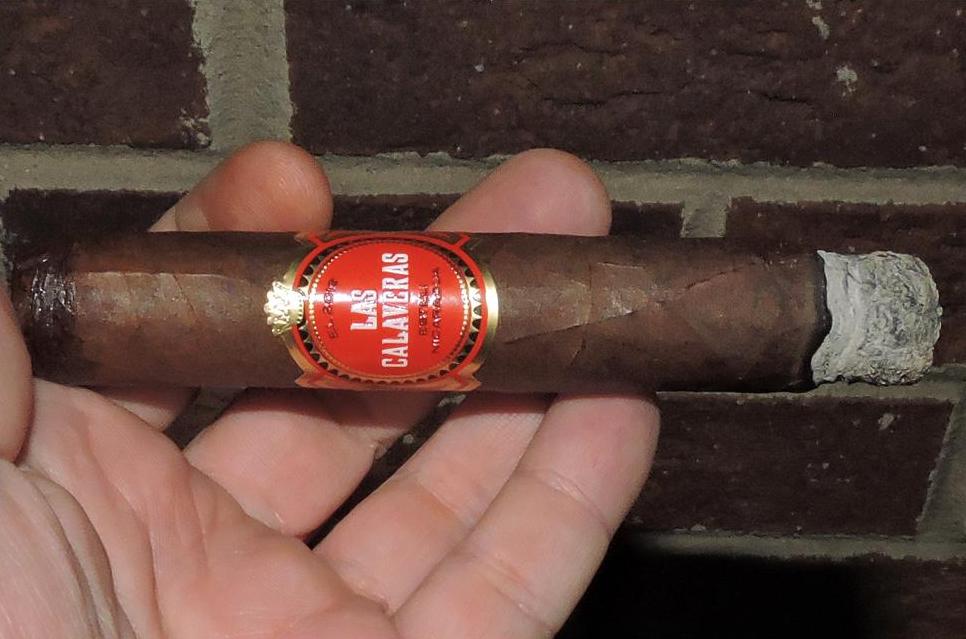 The draw to the Las Calaveras Edición Limitada 2019 LC50 had a touch of resistance – which is something that I look upon as a positive with the draw. This was a cigar that also produced an ample amount of smoke.

The Crowned Heads Las Calaveras Edición Limitada 2019 LC50 delivered a medium strength and medium bodied smoking experience from start to finish. There wasn’t much in the way of variance of the intensity levels during the smoking experience. In terms of strength versus body, there was a slight edge with the strength, but that didn’t have a negative effect on the overall smoking experience.

Given both the Las Calaveras Edición Limitada 2014 and 2019 versions use the Ecuadorian Habano Oscuro wrapper, there are going to be inevitable comparisons. At the same time, its impossible to do a side by side comparison simply because the 2014 version is five years old. In terms of the 5 x 50 Robusto (LC50) size, I’d have to go by memory and say I believe the 2019 version has a slight edge. I particularly liked some of the savory qualities the natural tobacco flavors brought to the table. I also liked this blend in the Robusto size. In the end, this is a cigar I could recommend to either the novice or experienced cigar enthusiast. As for myself, this is a cigar I would definitely purchase and smoke again.