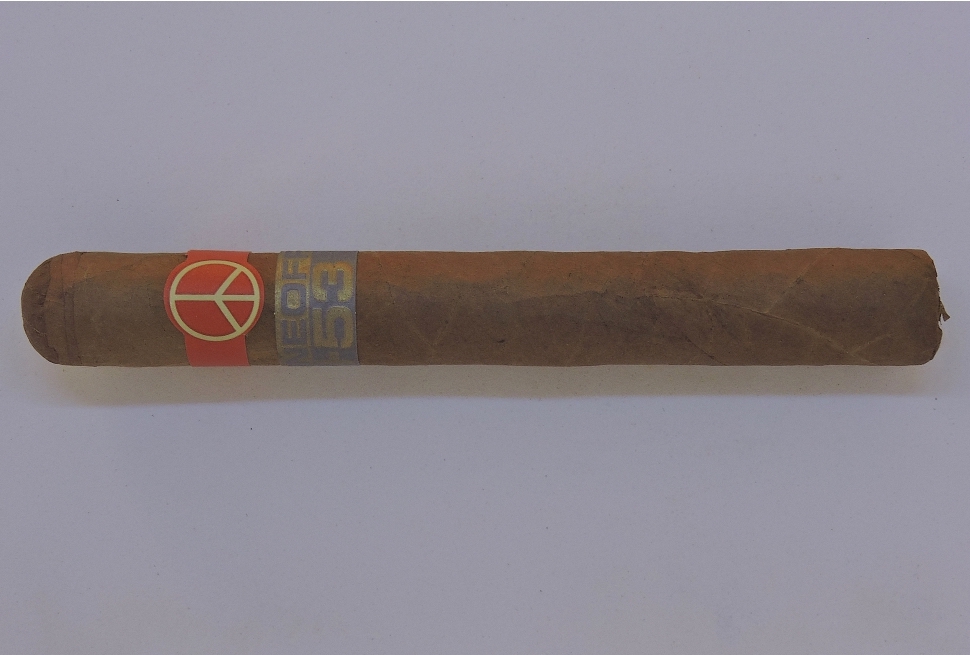 Back in 2017, Illusione Cigars owner Dion Giolito announced he was bringing back a brand known as OneOff. OneOff was a brand that achieved a cult status in the marketplace. Eventually, the brand fell dormant and pretty much disappeared from retail shelves. It was a brand that had always intrigued Giolito. As it was a brand that would qualify as predicate blends, it became that much more of an attractive property to acquire. After successfully acquiring the brand, Giolito would worko n fine-tuning the cigar and eventually re-release the line. One of the cigars in the OneOff line was a “one off” of the OneOff line –  it used different tobaccos than the rest of the OneOff offerings. This cigar is known as the OneOff +53 – and its described as a very different cigar than its OneOff siblings. Today we take a closer look at the OneOff +53.

OneOff was created by Andrea Molinari back in 2001. When Molinari created OneOff, he was a tobacconist who ran a La Casa del Habano in Milan, Italy. After failing to get his own brand made in Cuba, he turned to the Plasencia family, who would create the cigars at Segovia Cigars S.A. A year later, Molinari turned to Felipe Gregorio (owned by Philip Wynne) to handle his U.S. distribution. By 2004, distribution would move to Paul Giacalone of Massachusetts. Eventually, Plasencia stopped making the cigars and Molinari would sell the brand to Cuban Crafters.

As for the +53 name, it is a reference to the dialing country code in Cuba. Without further ado, let’s take a closer look at the OneOff +53 and see what this cigar brings to the table.

The original blend released by Molinari that was produced by Plasencia consisted of a Honduran wrapper over Nicaraguan binder and filler. Most of the specifics around the blend are shrouded in mystery. Other than the fact that Giolito’s blend uses Nicaraguan tobaccos and is made at Aganorsa Leaf’s TABSA factory in Estelí, Nicaragua.

The OneOff +53 blend is offered in one size known as a Super Robusto – measuring 5 3/4 x 48. The cigars are presented in ten-count boxes. 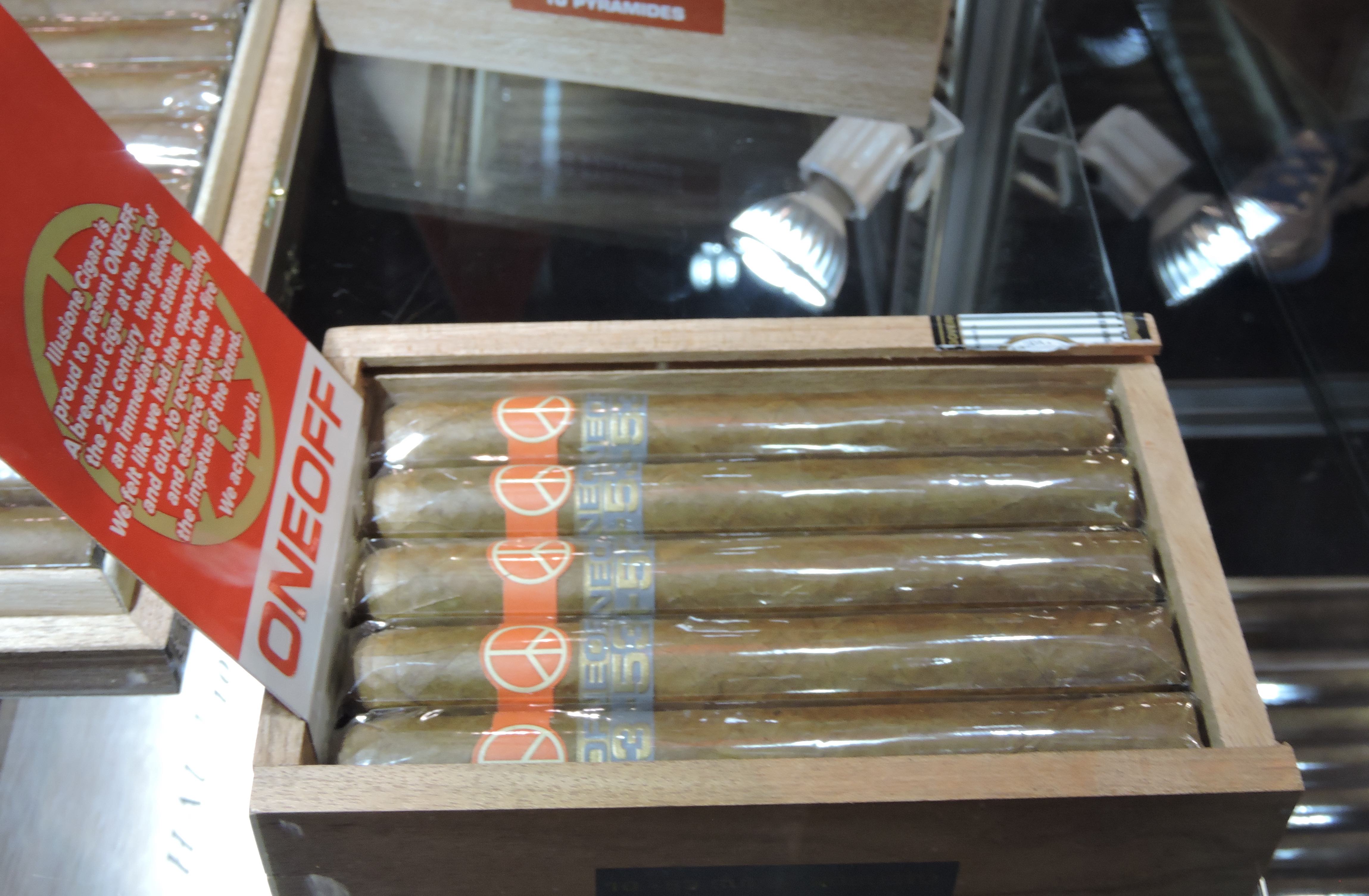 Packaging of the OneOff +53 Super Robusto

The wrapper of the OneOff +53 Super Robusto had a light Colorado reddish tint to it. Upon closer examination, some mottling could be seen on the surface. There wasn’t much in the way of oil on it. There were some visible veins, and any visible wrapper seams were minimized. The surface of this wrapper was slightly bumpy.

The OneOff +53 features two bands. The primary band is a simple, yet unique and eye-catching band. It features a white peace symbol on an orange background. This band is the same design found on the original OneOff cigar.

A straight cut was used to remove the cap of the OneOff +53 Super Robusto. Once the cap was removed it was on to the pre-light draw experience. The dry draw delivered notes of dusty earth, natural tobacco, and a very subtle fruit sweetness. Overall this was a satisfactory pre-light draw. At this point, it was time to light up the OneOff +53 Super Robusto and see what the smoking phase would have in store.

Later in the second third, the classic wood and pepper notes increased. As the OneOff +53 Super Robusto entered the final third, the natural tobacco and dusty earth maintained their position in the forefront with some occasional guest appearances from the wood note. The pepper was a little more prominent, but not overpowering. Notes of hay, pepper, and cedar were also still present in the background. This is the way the +53 Super Robusto came to a close. The resulting nub was slightly soft to the touch and cool in temperature. 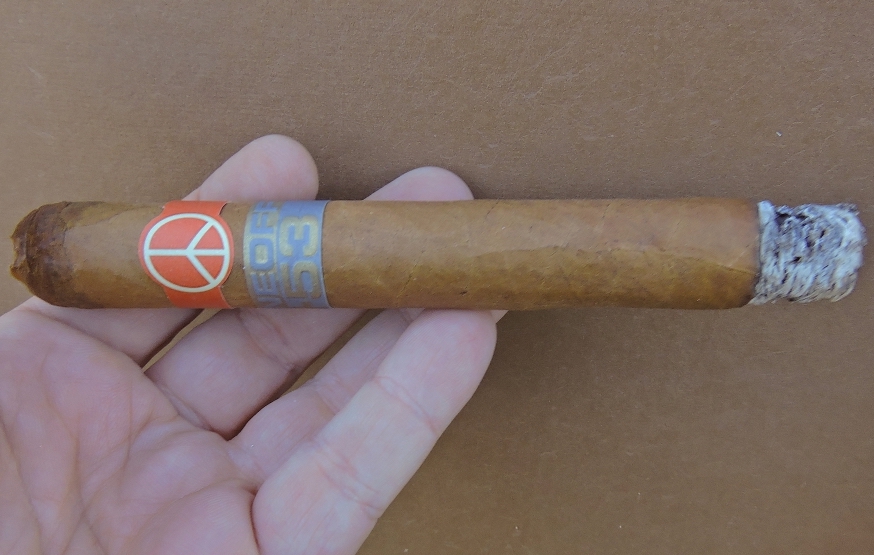 Burn of the OneOff +53 Super Robusto

The OneOff +53 Super Robusto also had an excellent draw. This was a cigar that had a touch of resistance to it – which is something I consider a positive. At the same time, this was also a low maintenance cigar to derive flavor from.

In terms of strength and body, the OneOff +53 Super Robusto started out medium. Both attributes had a slight increase in intensity along the way but in the end, the cigar maintained its position in the medium range of the spectrum. The strength and body balanced each other nicely with neither attribute overshadowing the other.

The OneOff +53 Super Robusto is a cigar with excellent construction that delivers quite a lot in the way of complexity. While not is revealedabout the “different tobaccos” used in this blend, one thing that I can say is that this cigar delivers a very different experience. Not only is it a unique profile for Illusione, but its one of thee more unique cigars I’ve ever smoked. In terms of the flavors delivered, I’m not sure they are for everybody (experienced or not). In my book, they still lacked a “wow factor.” Given this is an ultra-premium cigar (priced at $30.00 per cigar), it’s still one that I would advise seeing if you could try first before deciding what to purchase.