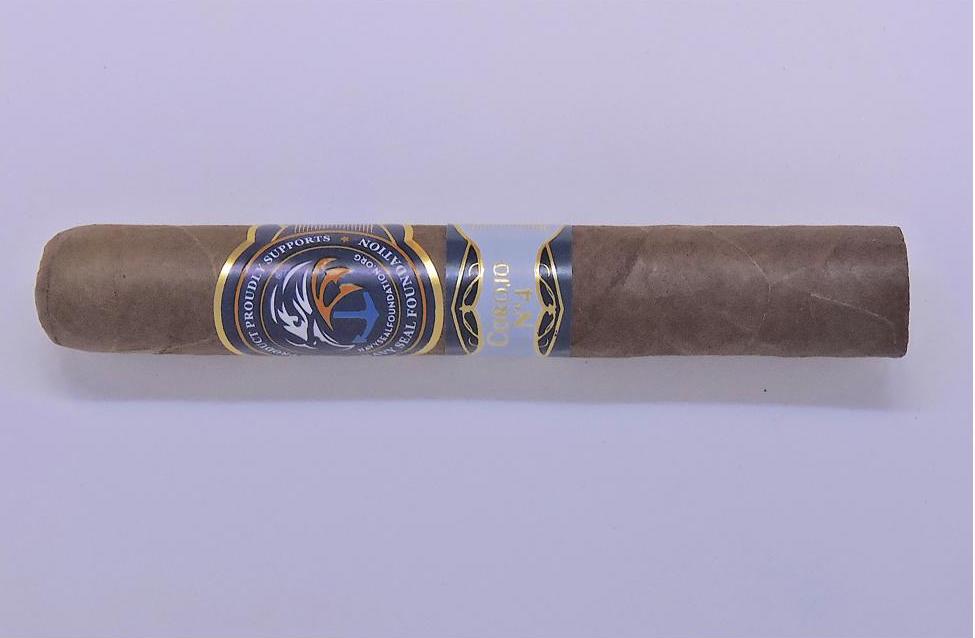 In 2018, Southern Draw Cigars would launch a collaborative charity project under a brand known as IGNITE. The 2018 releases would feature a series of unique line extensions to Southern Draw’s core lines: Jacobs Ladder, Rose of Sharon, Kudzu, and Firethorn. These cigars would see Southern Draw Cigars donate a portion of the sales to Cigars for Warriors. In 2019, Southern Draw would announce its 2019 IGNITE releases. A portion of the revenue from these cigars would be donated to the Navy Seal Foundation. While the 2018 IGNITE releases would be line extensions involving key retail partners, the 2019 releases would focus on new blends and have a much wider distribution to retailers. Today we take a look at one of those new blends, the IGNITE Corojo No. 4 cigar.

As for the new blends, at press time there have been three announced thus far. Southern Draw has stated there are three more releases planned as a part of the 2019 IGNITE series. The three blends have been positioned as “Private Blends” of Southern Draw and the number refers to the numeric identification of the blend.

Like last year, the IGNITE Series will be packaged in humi-jar canisters. Each humi-jar comes with a Boveda humidification pack and is designed to maintain the humidity when sealed. The 2019 IGNITE humi-jars feature a slightly different design. In particular, the IGNITE Corojo No. 4 humi-jar is a smaller size geared at the Rothschild viola it contains. 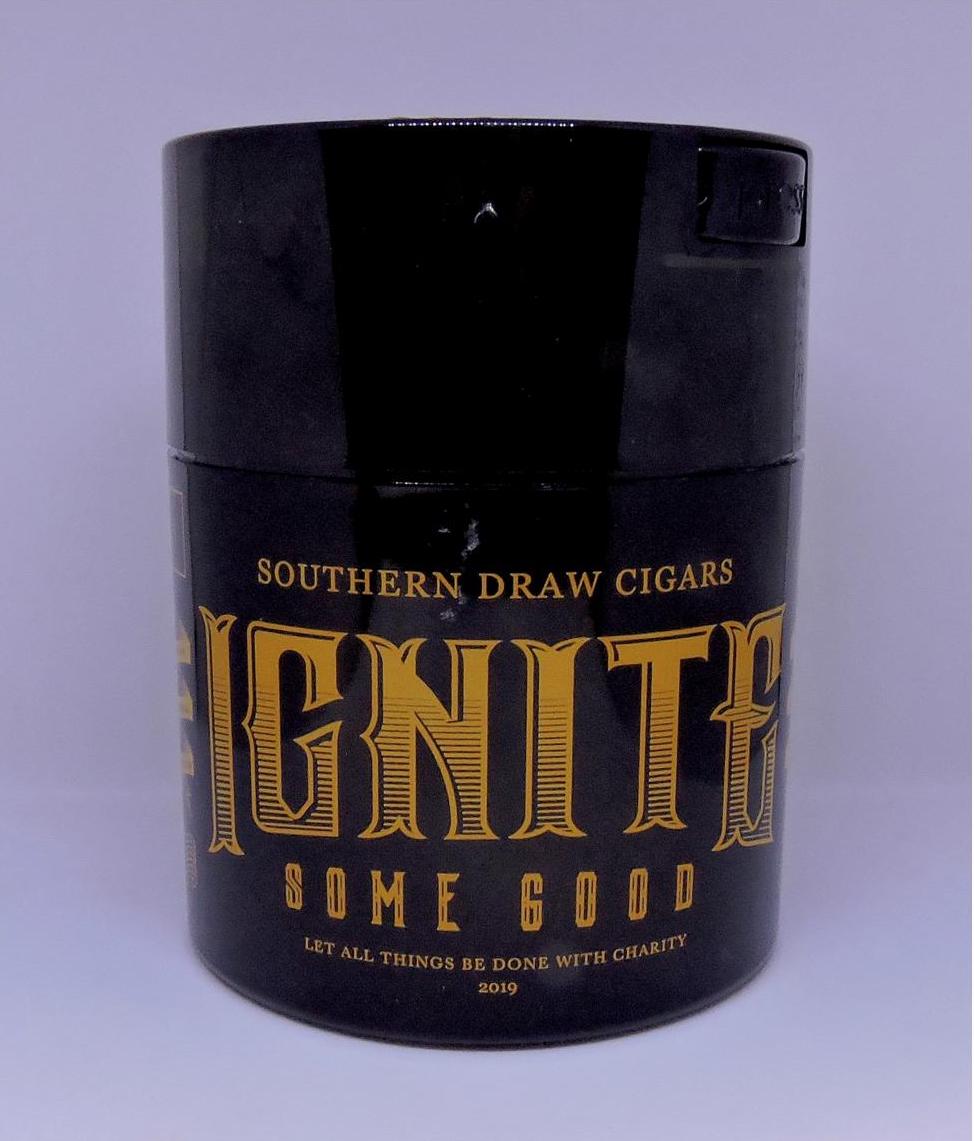 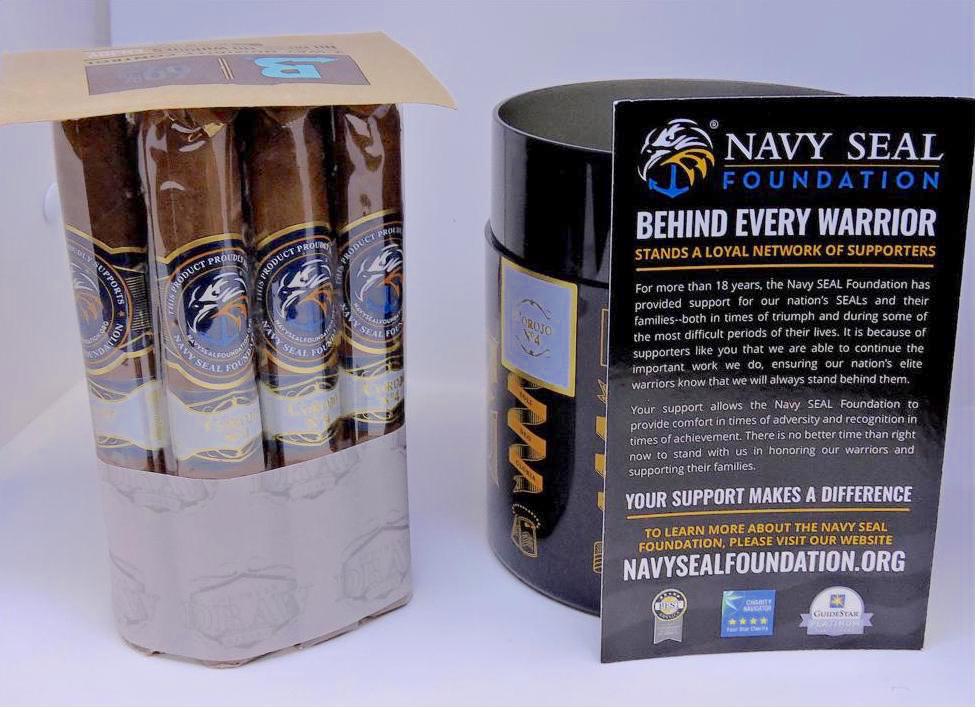 While showcased at the 2019 IPCPR Trade Show the cigar had a soft-launch with a series of events just prior to IPCPR. A pair of events were held at Crown City Cigars and McP’s Irish Pub in Coronado, California. This was followed by what Southern Draw referred to as a “friends and family” event on June 21, 2019 at Beach House Winery in Fallbrook, California.

Without further ado, let’s break down the IGNITE Corojo No. 4 Rothschild and see what this cigar brings to the table.

As the name indicates the IGNITE Corojo No. 4  uses a Corojo wrapper, the first major Southern Draw release to use this type of wrapper. Another first is that this is the first major Southern Draw cigar release to use a wrapper from Honduras. In a lot of ways, this is possibly the most Honduran-forward blend by Southern Draw to date. The blend also uses a double binder with tobacco from Nicaragua and Honduras, and the fillers also come from Honduras and Nicaragua. As with all Southern Draw cigars, the IGNITE Corojo No. 4 is produced at AJ Fernandez’s factory in Estelí, Nicaragua.

The IGNITE Corojo No. 4 comes in one size – a Rothschild. While the size is a Rothschild, the vitola is a 5 x 50 parejo – a size most commonly seen labeled a Robusto. For 2019 there are a total of 11,000 cigars being produced. These include 800 ten-count humi-jars, and 300 ten-count bundles.

The Honduran Corojo wrapper of the IGNITE Corojo No. 4 Rothschild had a medium brown color with a rosado tint to it. There was a light coating of oil on the surface. Any visible veins were on the thin side, and the visibility of the wrapper seams was minimal.

There are two bands on the IGNITE Corojo No. 4. The primary band is a hybrid design featuring the Navy Seal Foundation logo and the traditional Southern Draw primary band design. This band has royal blue, navy blue, orange, and white elements – along with gold trim. The text “SOUTHERN” and “DRAW” flank the left and right side of the band respectively featuring a white colored font.

The secondary band is also similar to the secondary band found on many Southern Draw cigars. This features navy blue, gold, and white elements. The text “COROJO No. 4” appears in gold font on a white background.

The top of the humi-jar features a large circular label with the Navy Seal logo. 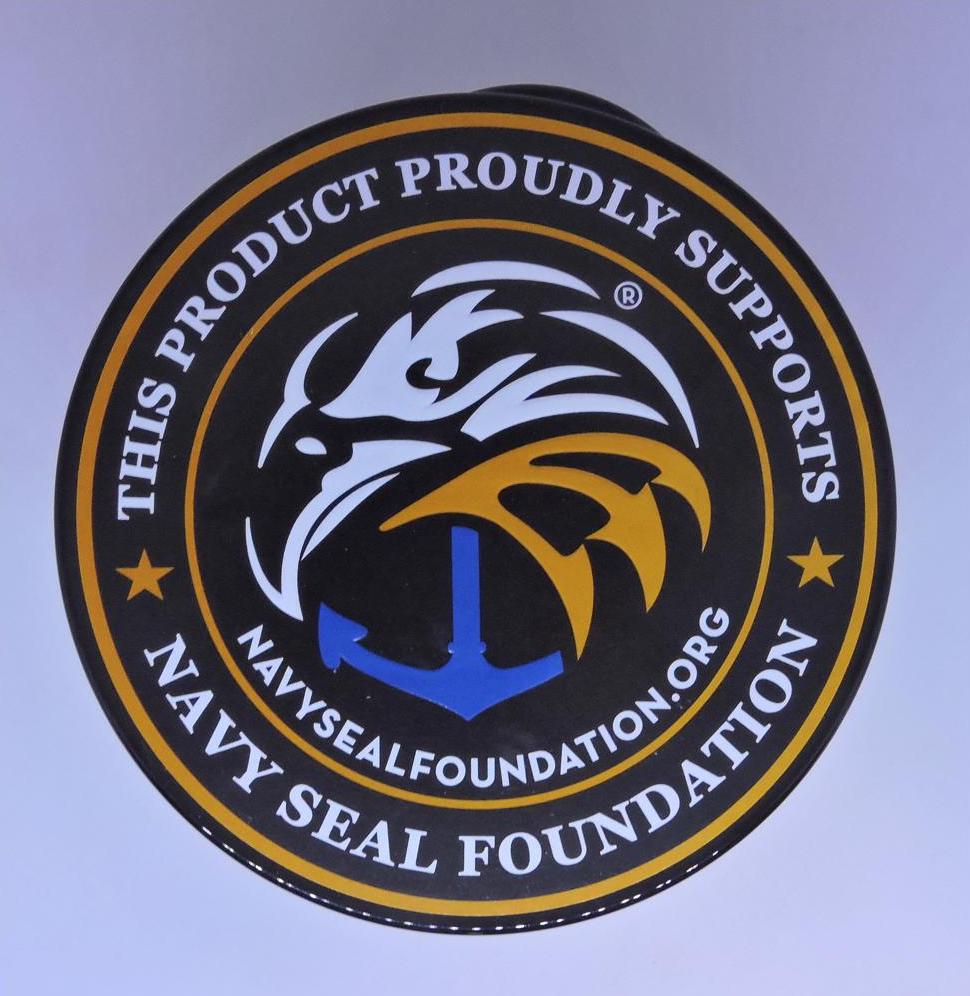 In addition, there is a sky blue and gold label affixed to the humi-jar with the text “COROJO NO. 4” in gold font. This is a change for the 2019 IGNITE Series as it each of the releases now have a label to help identify the blend. While last year’s jars were available and black and white colors, this year’s jars are black – and feature a slightly modified design from the 2018 series. 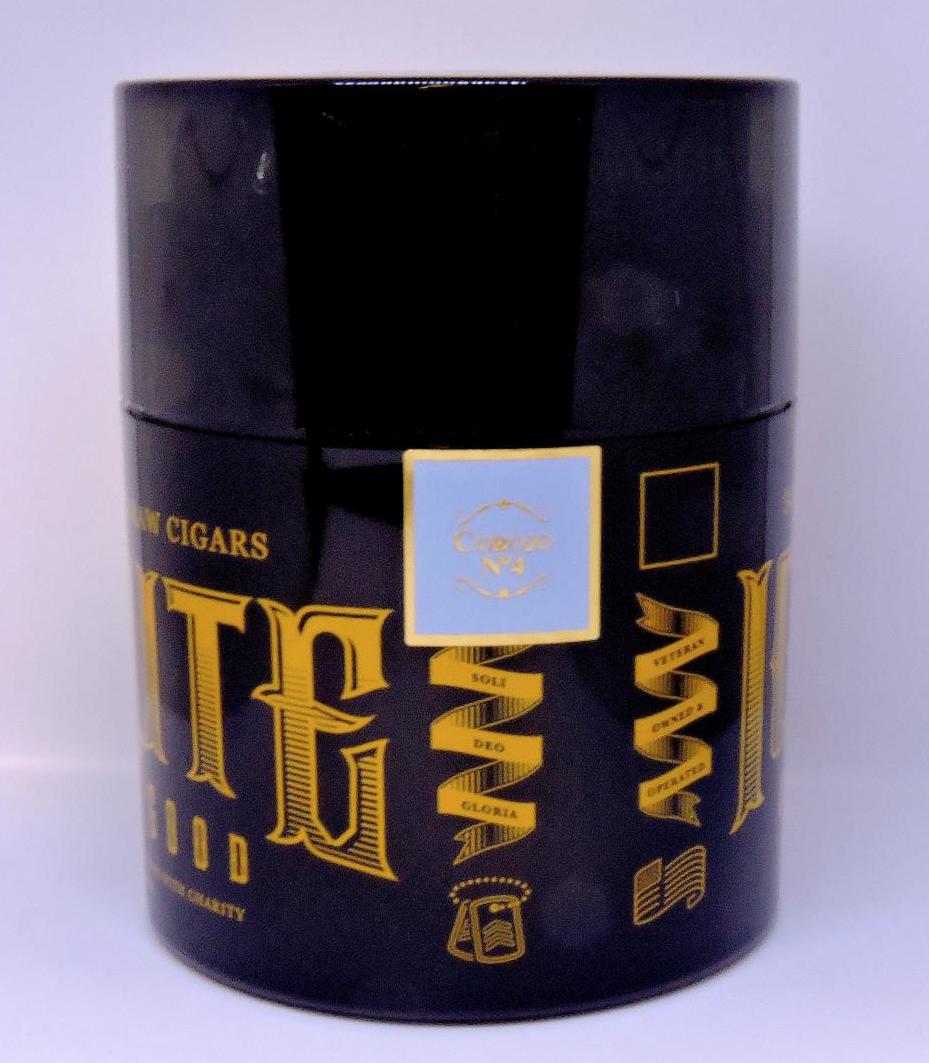 Prior to lighting up the IGNITE Corojo No. 4, a straight cut was used to remove the cap. After the cap was detached, it was time to move on to the pre-light draw experience. The cold draw included notes of earth, a slight natural tobacco sweetness, and a very subtle pepper spice note. This wasn’t the most exciting pre-light draw, but since the pre-light draw is not scored, this does not factor into the final ratings. At this point, it was time to light up the IGNITE Corojo No. 4 Rothschild and see what the smoking experience would have in store.

The IGNITE Corojo No. 4 Rothschild opened up with an assortment of flavors including mixed fruit, nut, natural tobacco, earth, and black pepper. As the cigar experience moved through the first third the mixed fruit and nut flavors moved into the forefront. The natural tobacco and earth settled in the background with the black pepper in the distant background. When it came to the retro-hale, the black pepper was more prominent.

Later in the first third, the nut flavors receded into the background leaving the mixed fruit as the primary note. Once the IGNITE Corojo No. 4 Rothschild progressed into the second third the natural tobacco and earth notes slowly increased in intensity and by the midway point, these flavors moved into the forefront.

The last third saw the natural tobacco and earth notes remain in the forefront. There was an increase in pepper and the emergence of some baker’s spice with both of these spices remaining in the background. There were still notes of fruit and nut rounding out the flavor profile. As the IGNITE Corojo No. 4 Rothschild cigar experience closed out, the cigar had a slightly soft nub that was cool in temperature.

There were several points at which the IGNITE Corojo No. 4 Rothschild had a wavy burn line, but in the end this was a cigar that was never in danger of having its burn path go awry. The resulting ash had a salt and pepper color. This was an ash that wasn’t overly firm, but was not loose or flaky either. The burn rate and burn temperature maintained ideal levels throughout the smoking experience. 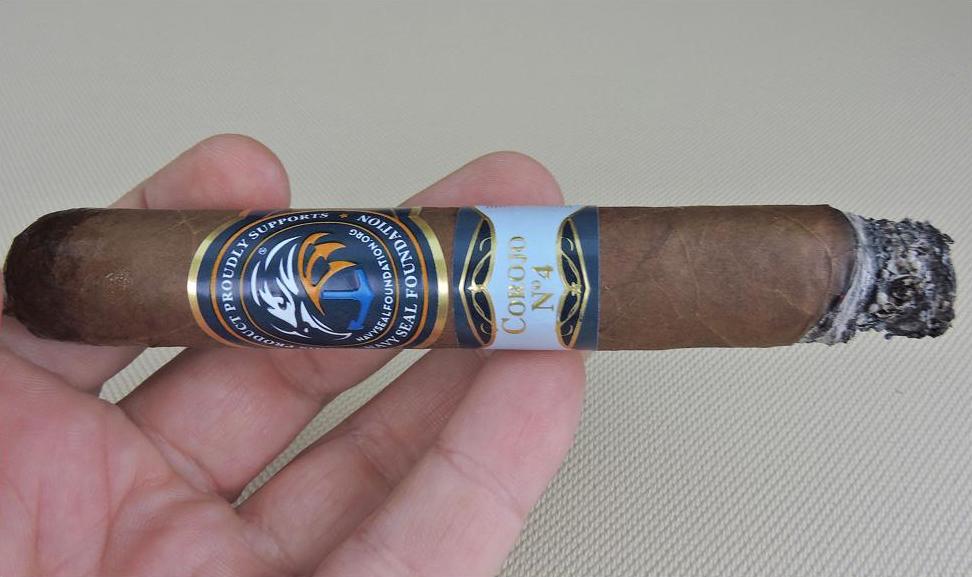 Burn of the Southern Draw IGNITE Corojo No. 4 Rothschild

There were four cigars smoked for the assessment of the IGNITE Corojo No. 4 Rothschild. Two of the cigars had a little bit of resistance to the draw – which is something that I like. The other two had a little more openness to the draw. In the end, all four cigars presented an excellent experience when it came to the draw.

In terms of strength versus body, the body of the IGNITE Corojo No. 4 Rothschild had a narrow edge over the strength.

I really liked the direction that Southern Draw took for the 2019 IGNITE Series – namely going with different blends from the core portfolio. At $11.49, this is not an inexpensive cigar, but it is one that certainly delivers in terms of overall performance. I’ve heard some critics say that AJ Fernandez is a one-trick pony, but that’s something that I disagree with. The IGNITE Corojo No. 4 Rothschild is a great example of this as it smokes very different than anything he has done before. This is a cigar I would recommend to an experienced cigar enthusiast or a novice looking for something on the medium plus side. As for myself, this is a cigar I’d purchase and smoke again. This is cigar that warrants picking up one of the ten-count humi-jars.