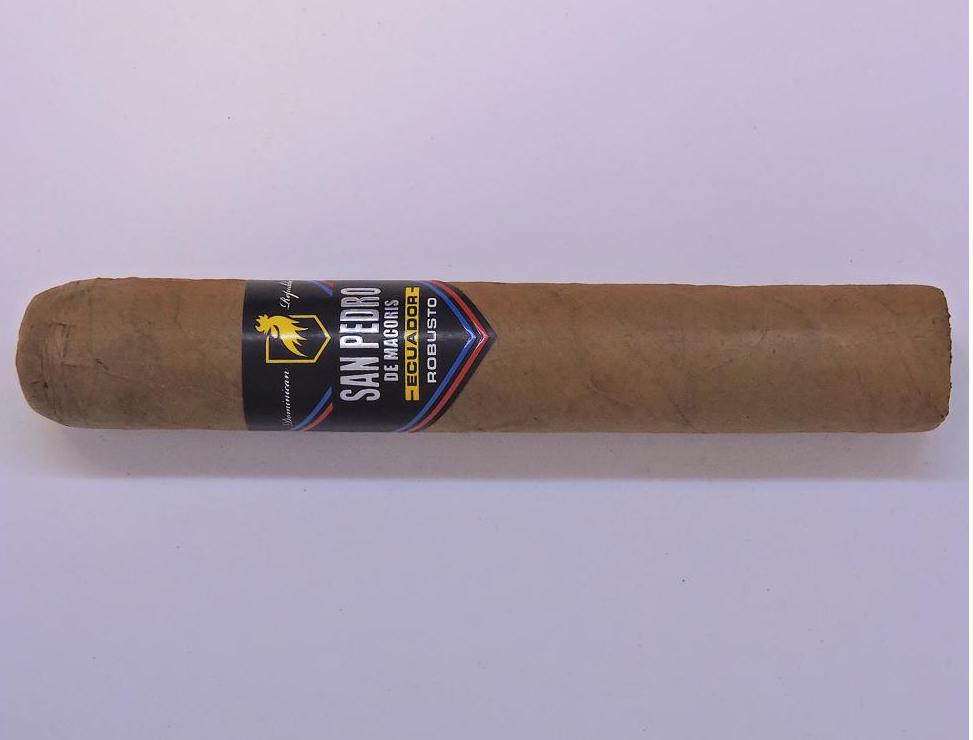 For the past five years, Royal Agio Cigars has been positioning itself to expand its premium handmade cigar business in the U.S. market. After a three year run of distribution in the U.S. by Drew Estate, in 2017 Royal Agio Cigars would open its own U.S. headquarters. At the time this occurred, Royal Agio had one premium handmade line, the Balmoral Añejo XO. It was very clear that Royal Agio would need more lines to expand its footprint. The company would invest in expanding its Balmoral line, but while Balmoral was its most premium line, Royal Agio also needed more of a value-priced line. That is where the San Pedro de Macorís brand comes in as it offers several value price blends. Today we take a closer look at one of those blends, the San Pedro de Macorís Ecuador in the Robusto size.

One footnote before going forward with this review. Royal Agio Cigars has announced it is selling its company to Scandinavian Tobacco Group (STG) pending regulatory approval.

Without further ado, let’s break down the San Pedro de Macorís Ecuador Robusto and see what this cigar brings to the table.

In addition to the Ecuadorian Connecticut Wrapper, there is Dominican tobacco used in the binder and filler. There is also the incorporation of Brazilian Mata Fina in the filler. Brazilian tobacco is a staple of Royal Agio Cigars found in many of their lines. 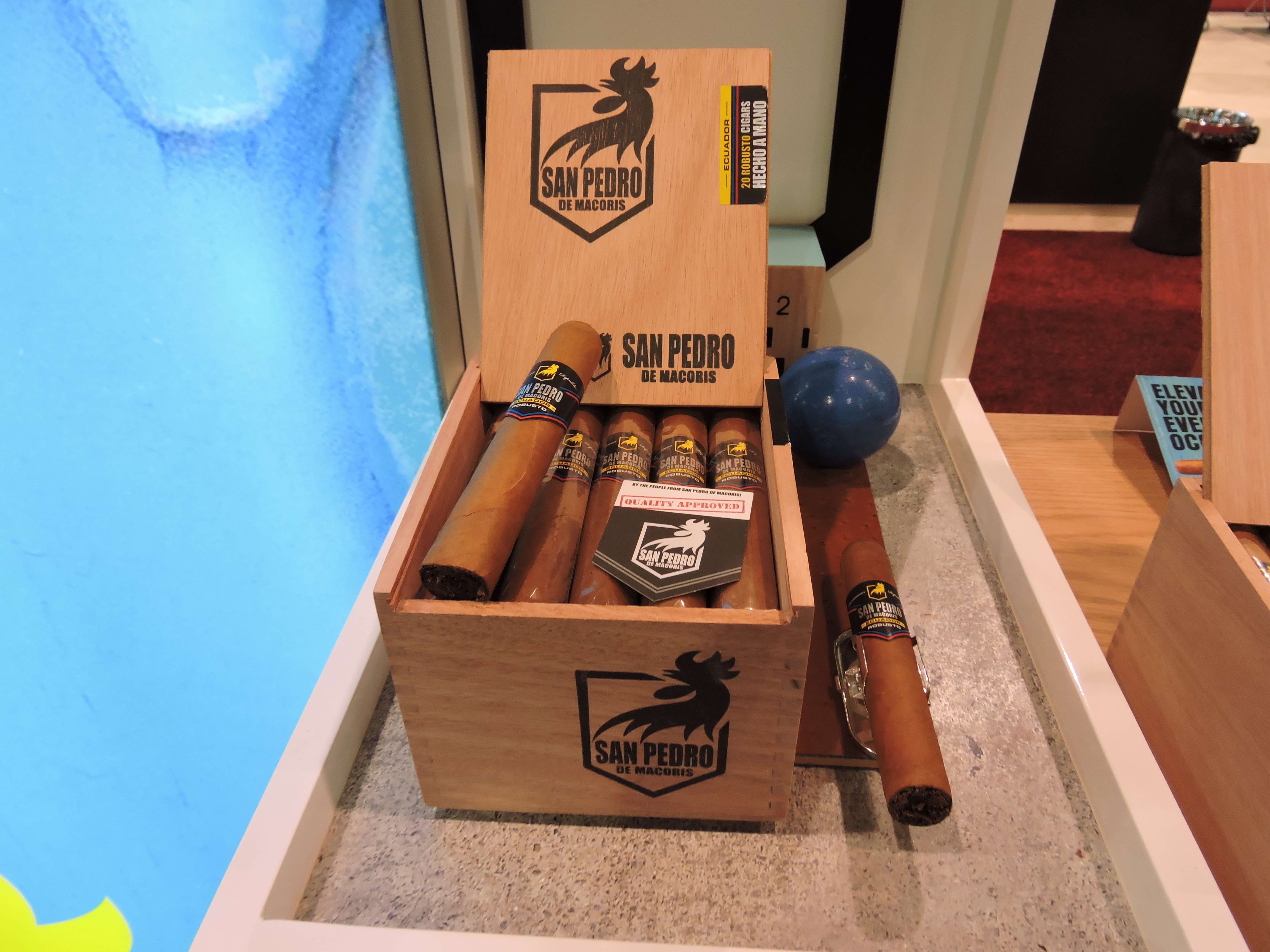 While the Ecuadorian Connecticut Shade wrapper of the San Pedro de Macorís Ecuador Robusto was still light brown, it seemed a slight bit darker than most Connecticut Shade wrappers I have seen. There wasn’t much in the way of oil on the surface of this wrapper. There were some visible thin veins and some minimally visible wrapper seams. This was a wrapper that was mostly on the smooth and elegant side. It’s a wrapper that would easily pass for a more premium one.

The band to the San Pedro de Macorís Ecuador was black in color. There were some red and blue accents and trim on the band. At the top was the San Pedro de Macorís logo of a rooster inside a shield. – both in yellow font. Surrounding the shield was the text “DOMINICAN” and “REPUBLIC” on the left and right side respectively in white cursive font. On the center of the band was the text “SAN PEDRO” in large silver font with the text “DE MACORIS” in a smaller silver font just below it. The text “ECUADOR” is in dark font with a yellow nameplate background. The band also has the name of the vitola – in this case, its the text “ROBUSTO” in light font.

A straight cut was used to remove the cap of the San Pedro de Macorís Ecuador Robusto. Once the cap was removed, it was time to commence with the pre-light draw. The dry draw was one of a class Ecuadorian Connecticut Shade cigars- delivering notes of cream, cedar, and classic wood. Overall this was a satisfactory pre-light draw. At this point, it was time to light up the San Pedro de Macorís Ecuador Robusto and move onto the smoking phase.

The last third saw the cedar notes remain in the forefront. The cream, citrus, and classic wood notes moved further into the background while there still was a slight amount of pepper on the tongue. This is the way the an Pedro de Macorís Ecuador Robusto came to a close. The resulting nub was soft to the touch and cool in temperature.

While there was a slight amount of curvature on the burn line, the San Pedro de Macorís Ecuador Robusto had no problems maintaining a straight burn path from start to finish. The cigar had an ash that was on the firmer side. This was an ash that was mostly silvery gray with some darker spots. The burn rate and burn temperature were ideal. 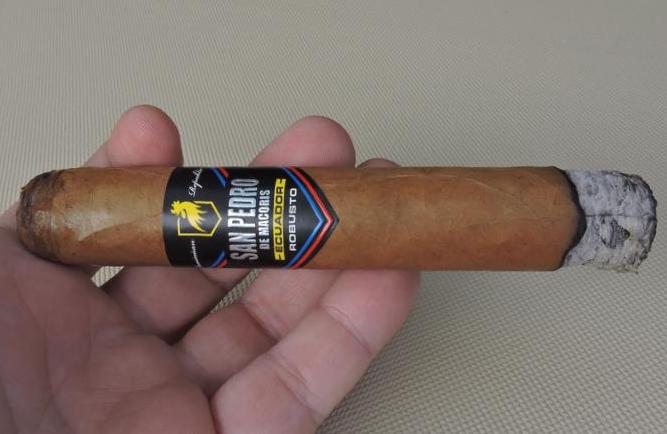 The San Pedro de Macorís Ecuador Robusto maintained an excellent balance of openness and resistance. This resulted in a pleasant experience while puffing on this cigar.

Strengthwise, the San Pedro de Macorís Ecuador Robusto started out on the mild side. Throughout the smoking experience, I found this cigar increased strength in a linear fashion – moving to mild to medium strength in the second third and medium strength for the final third.

In terms of strength versus body, the body had the edge throughout the smoking experience, but the gap closed during the final third.

One thing that stood out for me with the San Pedro de Macorís Ecuador Robusto is if you are looking for a cigar with classic Connecticut Shade flavors, but with just a little more in the way in boldness, this will be the cigar for you. While the flavors were good that were delivered from the San Pedro de Macorís Ecuador Robusto, I did find this cigar lacked a wow factor in terms of the overall experience. However, when you factor in a price point of $5.50, I still found this cigar to deliver more than some cigars at 3 times the price. In the end, it’s not the highest scoring cigar in the humidor, but it has one of the best value points. It’s one that I’d still smoke again and recommend. I’d also smoke this again and pick up multiples to keep in the humidor.