If one wanted to predict what cigars will end up on the leading cigar industry end of the year lists, one may want to look at what companies have provided press releases to the media. On the two lists considered to be the most influential: 25 of the 25 entries of the 2018 Halfwheel Consensus had press releases associated with the entries; meanwhile 24 of 25 on Cigar Aficionado’s Top 25 for 2018 have seen a correlation between media relations and entries on the list.

We are defining a press release as an official statement distributed to the media to provide information on a product release. Some press releases have been offered in a widespread capacity, some more narrow. Other press releases are exclusive to one media source (which one can argue are not really press releases). Cigar Aficionado, arguably the most influential publication in the industry, has been able to secure many exclusives with cigar companies. In all cases, there is a specific release date. In some cases, the press release is sent early before it is released.

For this exercise, we are not calling social media posts press releases.

The sample data used for this exercise was collected in 2018 for the purpose of such an exercise. A similar exercise will be done for this year. The reason that this has not been done for lists prior to 2018 is because we weren’t confirming the distribution of press releases. 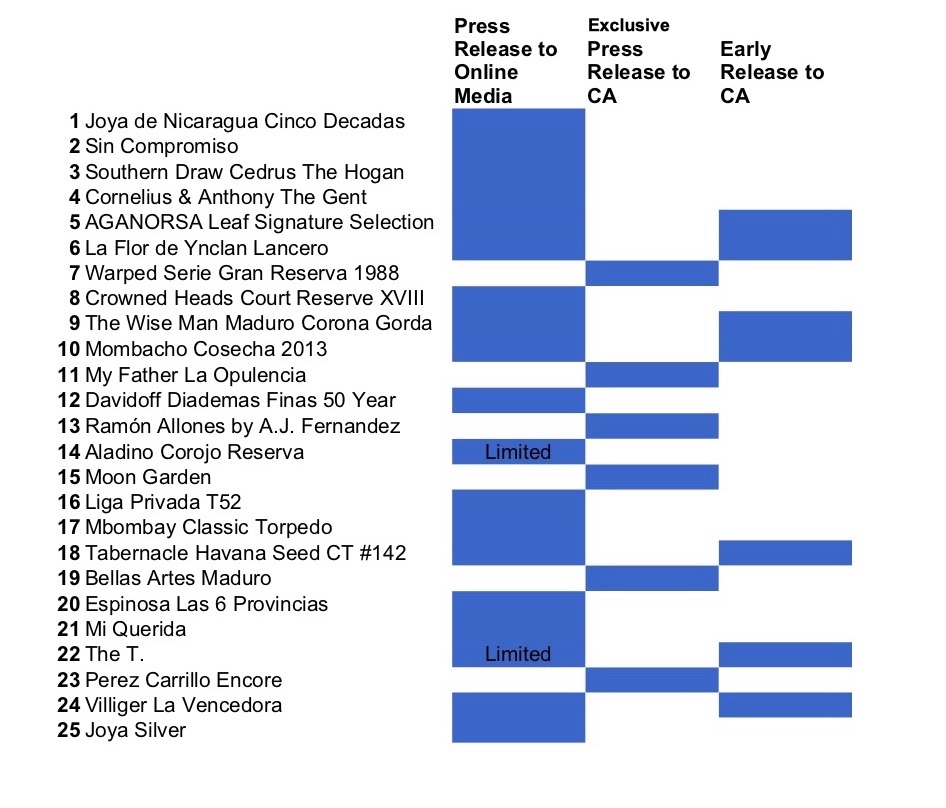 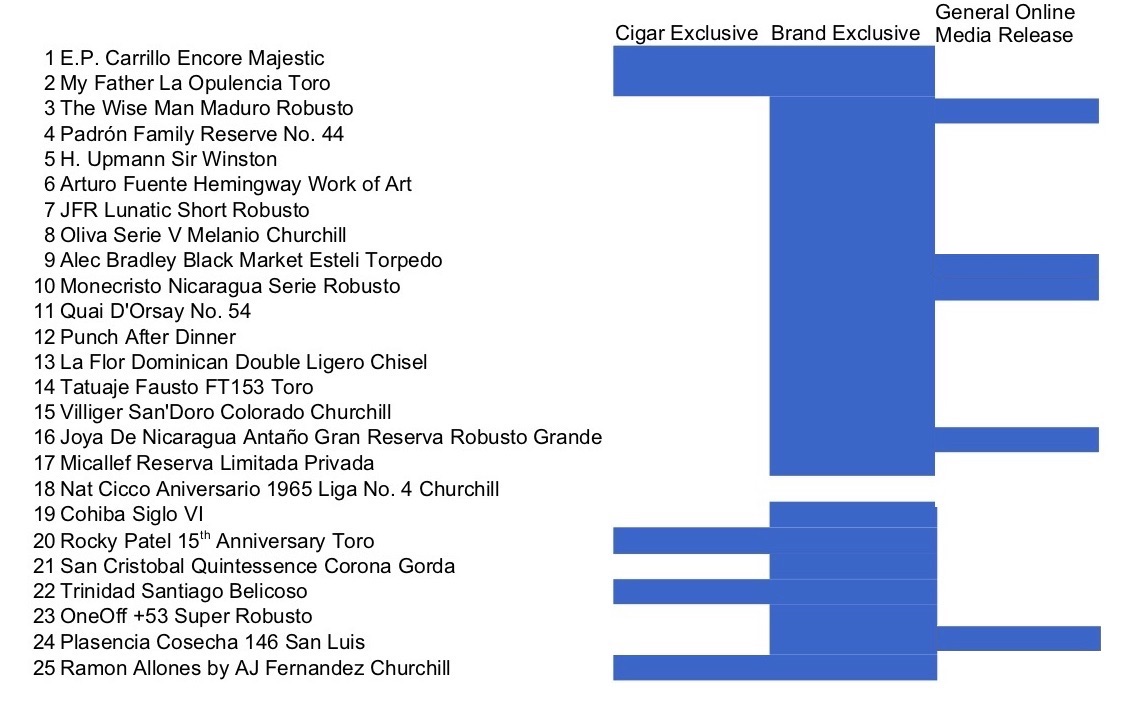 To better interpet the Cigar Aficionado data, we analyzed it a little differently. 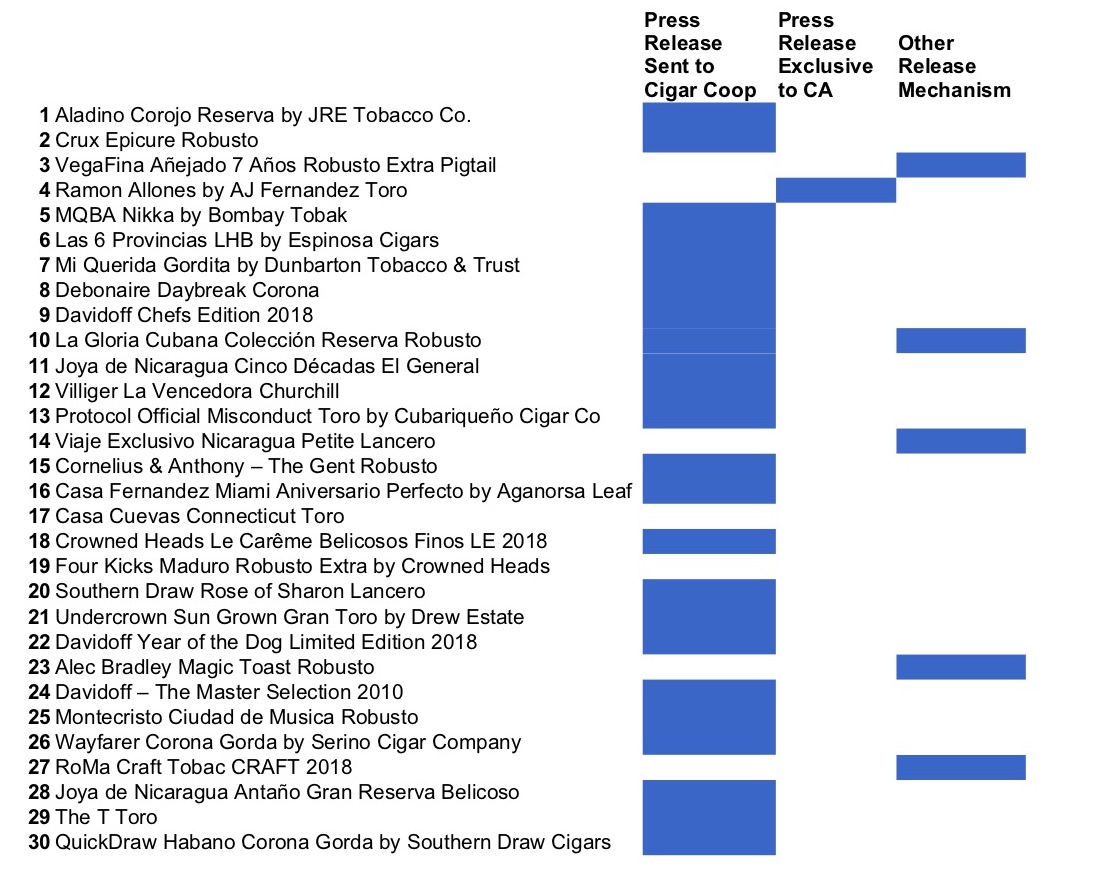 We looked at the following data for Cigar Coop

Cigar Coop has a mandate that any cigar that gets listed on the Top 25 be reviewed. In order to do be reviewed, we require press information to be made available to us. Press information is different than press releases. This can be sourced from social media, trade shows, and we have a conduit made available from the company to answer questions. In other words a request for information was not denied and not ignored.

Of the Cigar Coop Top 30, 28 of the 30 provided press information to Cigar Coop, of which 23 of them were actual press releases. The 23 number may seem surprisingly low – considering the passionate stance this author has taken on cigar companies doing press releases. However the 28 number does reflect the importance of communication.

Cigar Coop gave a #3 Cigar of the Year to VegaFina, a brand owned by Altadis U.S.A. There wasn’t a formal press release for this product and for other products, however when it came to getting press information from Altadis, we had little problem getting it from the company.

At the same time, I’m not saying a press release guarantees a Top 25 rating. General Cigar has long had a strong showing with the cigar media, and did not land on the Consensus. 2018 Companies like Warped Cigars and Mombacho gave several exclusive stories to Cigar Aficionado in 2018, and neither made the publication’s Top 25.

Charlie Minato, who curates the Halfwheel Consensus has also been on the record stating that project is “a fascinating window to see the relationships between cigar media and the companies they cover.” It was an eye-opening statement to this author.  While the case can be made that relationships matter for the Consensus, our analysis of the Cigar Aficionado data shows that their relationships with cigar companies are leveraged.

In the end, cigar media relies on relationships and getting information. I’ll speak for Cigar Coop – when we get information, we’ll cover the product. Press releases represent the easiest way and least resource intensive way to get this information. Select products we cover get reviewed, and those cigars that get reviewed with a high enough score are eligible for the Cigar Coop Countdown. While to some extent Cigar Coop has formalized this process, it’s not unreasonable to assume other media outlets do this by osmosis.