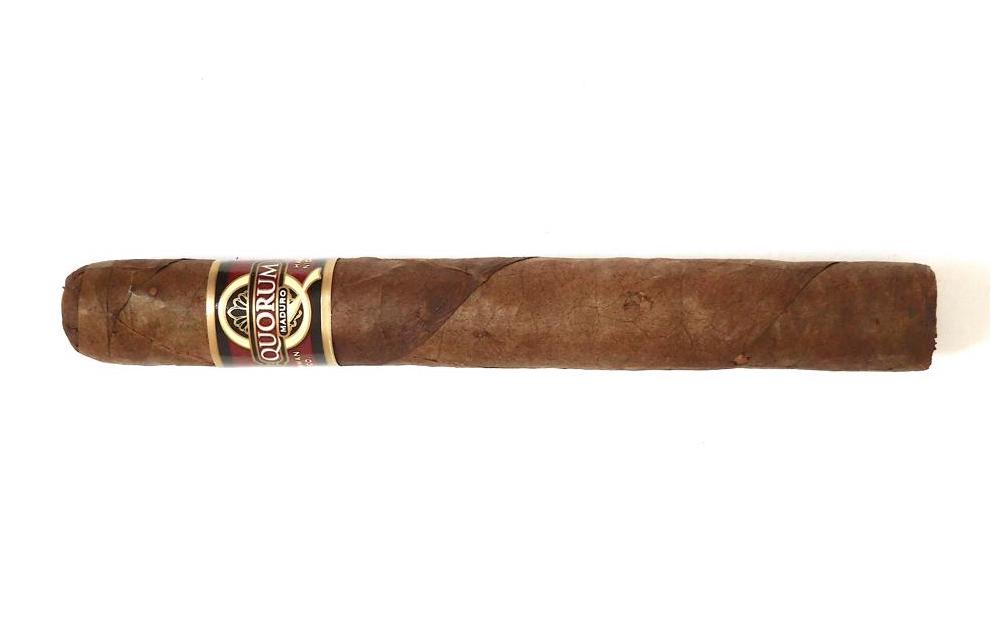 Today we take a closer look at a cigar type we typically don’t review, but is one of the best selling cigars in the world – the Quorum Maduro. Quorum Maduro is one of three blends offered by J.C. Newman Company under the Quorum brand. Quorum is a brand of value-based Cuban sandwich cigars. As opposed to use 100% long filler tobaccos, the Cuban sandwich uses short and mixed (short and long filler) tobaccos in the blend. Short filler tobaccos are the remains of tobaccos that are gathered up as excess tobacco when long filler cigars and rolled, bunched, and cut. Many cigar companies utilize these and have been quite successful with Cuban sandwich cigars – mostly because they are sold at an attractive price-point. We have rarely reviewed these types of cigars. In this case we are going to take a closer look at the Quorum Maduro in the Toro size.

Without further ado, let’s break down the Quorum Maduro Toro and see what this cigar brings to the table.

The Quorum Maduro features a Sumatra Sungrown Maduro over a Connecticut Broadleaf binder and all Nicaraguan fillers.

The Quorum Maduro is offered in five sizes. Each is presented in 20-count bundles.

The Ecuadorian Sun Grown Maduro wrapper of the Quorum Maduro Toro had a roasted coffee bean color to it. The wrapper also had a rugged look and it gave the cigar a charm. This was a wrapper that didn’t have much in the way of oil on the surface. There were many prominent visible veins that were toothy on the surface. The dark color of the wrapper hid most of the wrapper. There were some soft spots on each of the cigars I smoked, but this didn’t prove to cause any combustion problems.

The band to the Quorum Maduro was maroon with gold and black trim. The center of the band had a big gold “Q”. There is a nameplate-like design that was also maroon with gold and black trim. On that nameplate is the text “QUORUM” in white font. Hanging off the nameplate is the text “MADURO” in a small white font. Inside the “Q” is what could best be described as a gold leaf design. The left side of the band has the text “JC NEWMAN CIGAR CO” in gold font while the right side has “HANDMADE NICARAGUA” in gold font.

A straight cut was used to commence the smoking experience of the Quorum Maduro Toro. Once the cap was removed it was on to the pre-light draw phase. The dry draw delivered a nice mix of earth, cedar, classic wood, and light cocoa notes. This was a satisfactory pre-light draw and I moved on to lighting up the Quorum Maduro Toro and entering the smoking stage of this cigar.

The Quorum Maduro Toro kicked off with notes of coffee, cocoa, and classic wood. Sometimes coffee and cocoa notes can form a fusion that I will refer to as “mocha”, but in this case the notes were distinct. Early on the coffee and cedar notes moved into the forefront. The classic wood settled in the background. Meanwhile, the retro-hale delivered additional layers of coffee and wood. The retro-hale also had some black pepper mixed in.

The final third saw a spicy profile from the black pepper and cedar notes. This was rounded out by the classic wood, cocoa, and coffee notes. This is the way the Quorum Maduro Toro came to a close. The resulting nub was soft to the touch and cool in temperature. 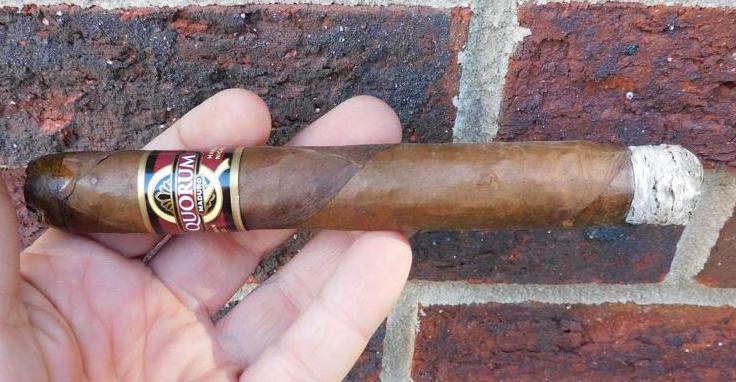 Burn of the Quorum Maduro Toro

The draw to the Quorum Maduro Toro was open, but not loose. While not a bad draw by any means, I normally prefer a little more resistance on the draw. Many times when I puff on a Cuban sandwich cigar, I get what we used to call on “Scooby snacks” (loose tobacco) following cutting the cap. There was no such problem with the Quorum Maduro Toro.

Meanwhile, the flavors of the Quorum Maduro Toro were medium-bodied from start to finish. There was a slight increase in the intensity level of the body, but the cigar remained in the medium range In terms of strength versus body, the body had a significant edge from start to finish.

Pricewise, the Quorum Maduro Toro is going to run you $56.00 for a bundle of 20 – which comes out to $2.80 per cigar. Taking price out of the equation, on merit this cigar comes in at an 87. At Cigar Coop, whether a cigar is long-filler or short-filler/Cuban sandwich, the cigar is going to be scored the exact same way. By no means is the Quorum Maduro Toro going to win a cigar of the year. I found this to be a better cigar in the first half than the second half. One nice thing is if you are looking for a lighter Maduro, this isn’t a bad option. In the end, at $2.80 it’s hard to go wrong with this cigar – no matter what type of cigar enthusiast you are. This is a cigar I could smoke from time to time and it’s one of which I would keep multiples in my humidor.