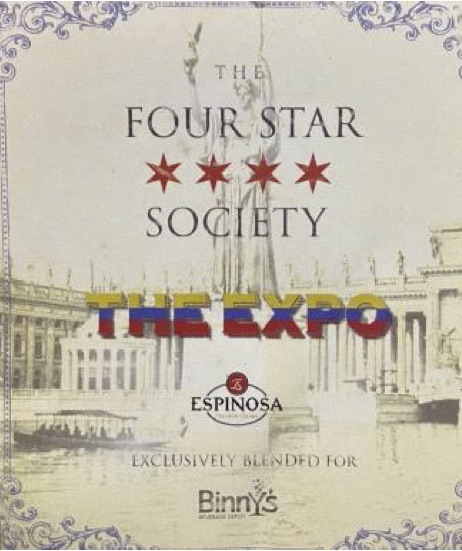 The Expo pays homage to the 1893 World’s Columbian Exposition (Better known as the Chicago World’s Fair) that was held in 1893 to commemorate the 400th anniversary of Christopher Columbus’ arrival in the New World. The Expo is also a part of Binny’s Four Star Society Series (paying homage to the flag of Chicago) of shop exclusives.

Produced at Erik Espinosa‘s La Zona factory, the Expo is wrapped in a Mexican Capa Negra over Nicaraguan binder and fillers. The cigar comes in one size – a 6 x 52 Belicoso. The cigars will be available in 10-count butcher paper-wrapped soft packs. A total of 400 soft packs were made. Pre-order pricing is at $56.95.

“I am incredibly happy to be able to work with Binny’s on this project. Our Key Accounts Manager Richie Otero and Binny’s own Jack Spethmann really brought this project together, and I’m really excited to bring our brands back into both the Chicago area and Illinois,” commented Erik Espinosa in a press release.

At a glance, here is a look at The Expo by Espinosa Cigars.