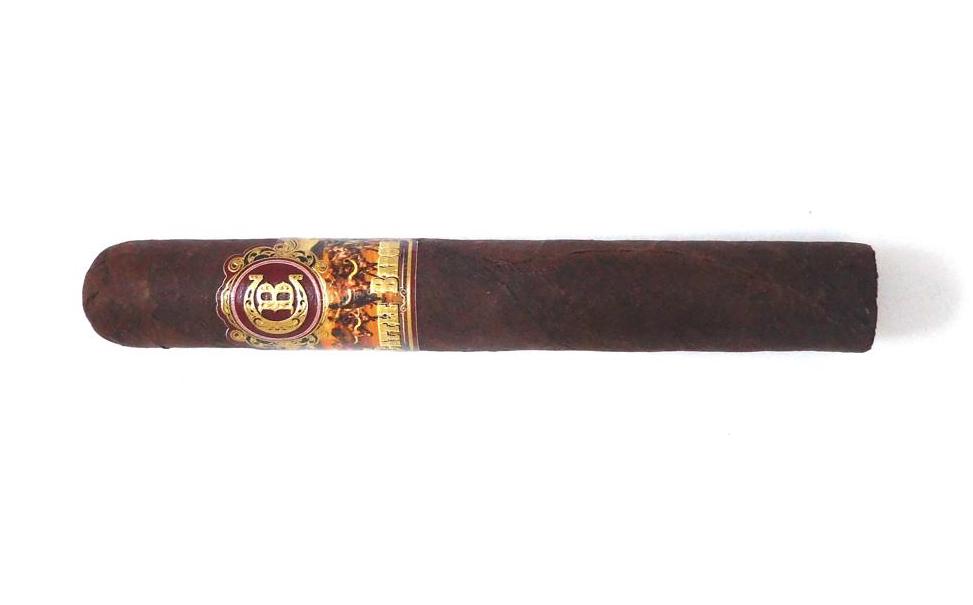 The idea of pairing cigars and meat has been quite a popular concept over the past year. We’ve seen companies such as La Flor Dominicana and Dunbarton Tobacco & Trust do it. However if you go back four years ago, it was Cattle Baron Cigars that brought this concept to market. Cattle Baron Cigars is a company launched by cattle stock grower Bryan Mussard out of Montana. When it comes to the cattle industry, Mussard is a well known name. He served as President of the Montana Stockgrower’s Association. He also has branched out to other ventures, most notably Gorgeous Vodka – a brand of potato vodka. When it came to his cigar brand, he teamed up with Phil Zanghi of Debonaire House and the De Los Reyes Factory to produce his cigars. In 2016, the original Cattle Baron (Natural) cigar was released. In 2019, the long awaited follow-up, the Cattle Baron Maduro made it to market. Today, we take a closer look at the Cattle Baron Maduro in the Trail Boss (Toro) size.

When Cattle Baron Cigars exhibited at the 2016 IPCPR Trade Show, Mussard had told me there was a Cattle Baron Maduro in the works. However, it would be another three years before the Cattle Baron Maduro would make its debut. While some may consider a three year gap between new releases a long time, I would disagree with that. Mussard has shown a lot of patience in the development of his blends, and he never struck me as someone who wanted to introduce something into the market for the sake of introducing something. In my book, that’s an approach of a healthy brand.

Without further ado, let’s break down the Cattle Baron Maduro Trail Boss and see what this cigar brings to the table.

The Cattle Baron Maduro uses a San Andres Mexican maduro wrapper. The remainder of the blend is pretty much the same as the base Cattle Baron blend incorporating a Dominican binder and a combination of Dominican and Nicaraguan fillers.

The San Andres wrapper of the Cattle Baron Trail Boss had a roasted coffee bean color to it. There wasn’t much in the way of oil on the surface and there was a slight toothiness to the wrapper. There were also some visible veins on the surface. The darker color of the wrapper did a good job at hiding the wrapper seams.

The band of the Cattle Baron Maduro is the same one found on the original Cattle Baron line. It is highlighted by a Western-style portrait reminiscent of an oil painting. The lower portion of the portrait has the text “CATTLE BARON” in a Western-style gold colored font sitting on top of it. The band has several gold adornments and the edges of the band are trimmed in gold and maroon. Toward the top of the band is a maroon circle. On the circle is a classic-styled gold colored “B.” Surrounding the “B” is a horseshoe-styled gold colored ”C.” On the right side of the band is the text “HAND MADE” in small white font. The far right has another maroon and gold “C B” logo that serves as a band fastener. On the far left of the band is the text “CATTLE BARON” in small white font in landscape mode.

Prior to lighting up the Cattle Baron Maduro Trail Boss, a straight cut was used to remove the cap. Once the cap was removed, it was on to the pre-light draw phase. The cold draw delivered notes of milk chocolate, malt, earth, and cedar. Overall this was an excellent pre-light draw. At this point, it was time to light up the Cattle Baron Maduro Trail Boss and see what the smoking phase would deliver.

The Cattle Baron Maduro Trail Boss opened up with notes of chocolate, coffee, cedar, and black pepper. The very early phases of the smoking experience saw the chocolate note have a slight edge. As the cigar moved through the first third, the coffee notes displaced the chocolate as the primary flavor. While the chocolate settled in the background with the cedar and black pepper, there were some points where the chocolate made a brief appearance back in the forefront. Meanwhile, the cedar and pepper notes were secondary notes on the tongue, they were much more prominent on the retro-hale.

The second third of the Cattle Baron Maduro Trail Boss saw the pepper and cedar notes slowly increase in intensity. As the cigar progressed through this third, the gap between the coffee in the forefront and the spices in the background diminished. There still was some chocolate present in the background. During this phase, some of the malt flavors present on the pre-light draw began to resurface.

By the final third, the black pepper joined the coffee notes in the forefront. Meanwhile the cedar, chocolate, and malt notes rounded out the flavor profile. This is the way the Cattle Baron Trail Boss came to a close. The resulting nub was soft to the touch and cool in temperature.

The Cattle Baron Maduro Trail Boss did require some touch-ups to maintain a straight burn path and straight burn line. The amount of touch-ups needed was slightly more than I prefer, but the touch-ups did the trick. The resulting ash had a salt and pepper color. This ash skewed toward the firmer side. The burn temperature was ideal. The burn rate was a little faster than I prefer. (It took about 74 minutes average to smoke the Trail Boss). 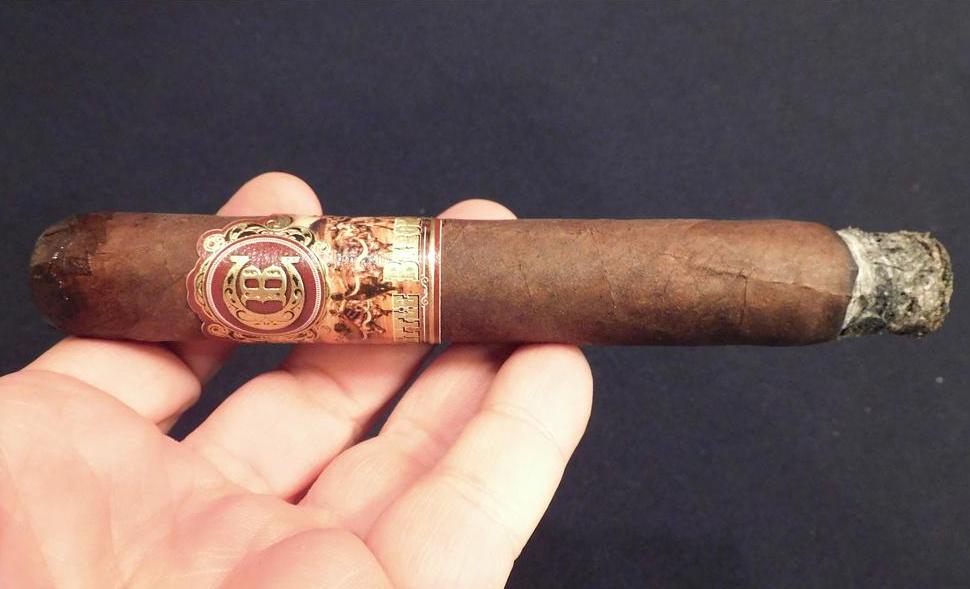 As for the draw of the Cattle Baron Maduro Trail Boss, it was on the open side. I’ll infer this is why the cigar burned a little faster than I preferred. At the same time, there were no other adverse effects other than a faster smoking rate. This is also a cigar that produced ample amounts of smoke.

The Cattle Baron Maduro Trail Boss is not going to overpower the palate. This is a cigar that started more dialed back as it delivered mild to medium strength and mild to medium body. By the second third, the strength and body progress into the medium range where it remained for the duration of the smoking experience.

Cattle Baron’s 2016 release was quite an impressive one, so in terms of the follow-up with the Maduro, I had high expectations. The good news is the cigar met those expectations and performed quite well. The De Los Reyes factory has worked very well with San Andres wrapper (including using it on our 2019 Cigar of the Year – the Saga Short Tales Tomo VI), so I knew they would do well with it on the Cattle Baron Maduro. If you like some of the “bite” a San Andres Maduro can bring, the Cattle Baron Maduro is that cigar for you. At the same time, this isn’t an overpowering cigar so the bite isn’t too much. Finally, if you wanted to pair this cigar with a steak meal, I don’t see any reason not to.

This cigar achieves a “Cigar Coop Standard of Excellence” with a 90 point score. It’s a cigar I would recommend to any cigar enthusiast. As for myself, it’s one I would reach for and smoke again – and buy multiples to keep in the humidor.