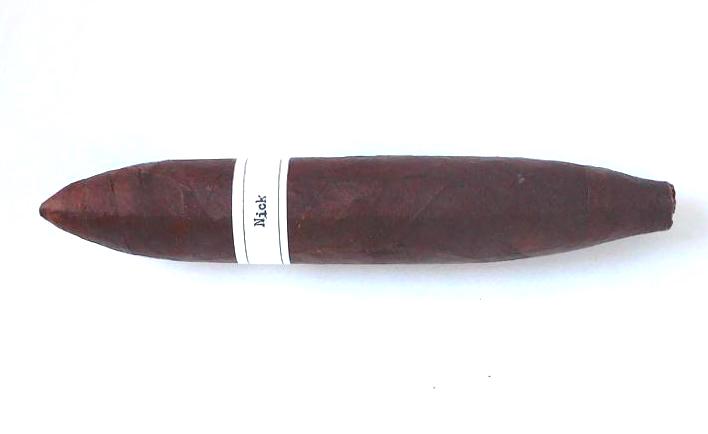 “Nick” is a line that was launched in 2020 in the LH Cigars portfolio. The line is named after the company’s founder, owner, and blender Nick Syris. For several years, LH developed a strong core following with its LH blends. Late in 2017, Syris would collaborate with “Island Jim” Robinson on another brand known as Nick & Jim – which would become another successful line for LH. While the LH and Nick & Jim lines provided success for Syris, he soon began to field requests for special sizes in his lines. One format that was missing was a figurado, so in 2020 the Nick Panzon would make its debut. It’s a large 6 x 64 figurado that we will talk about in today’s assessment.

The requests for the new sizes came as a result of Syris meeting with retailers and customers. When it comes to the Nick blend, the first release was actually in the form of a 6 x 46 Lonsdale (another size that LH did not have in the portfolio). The Nick Lonsdale would be originally released as a private blend for 2nd Street Cigars in Oklahoma. This was followed by the Panzon which would see a national release.

Without further ado, let’s break down the LH Nick Panzon and see what this cigar brings to the table.

The Nick Panzon is a four-country multi-national blend highlighted by an Ecuadorian Vuelta Abaja wrapper. This is a wrapper that is a personal favorite of Syris. Production for the Nick is handled in Costa Rica at the Tabacos de Costa Rica factory. This is the factory that handles all of LH Cigars’ production.

As mentioned the Nick line added both the Panzon figurado and the Lonsdale size. The Nick Panzon is packaged in 20-count boxes

The Ecuadorian Vuelta Abaja wrapper had a chocolate brown color to it. Upon closer examination, there was a slight amount of mottling on the surface. This is a wrapper that did not have much in the way of oil on the surface. There also was a slight toothiness on the wrapper. There were some thin veins and thin visible wrapper seams.

The name “Panzon” is Spanish for potbelly and it reflects the design of this figurado. The cigar itself is more or less a “fat perfecto” that is tapered on each end. The tapering is sharp on the head of the cigar where it converges into a near point. The tapering is more gentle near the footer. The footer is open and there is a slight nozzle shape on that end of the cigar.

The band is quite simple. It’s a white paper band with the text “Nick” in a black off-aligned typewriter font.

A straight cut was used to commence the cigar experience of the LH Nick Panzon. The cut was placed to still maintain a significant amount of tapering in order to maintain the effect of the figurado. Once the cap was removed it was on to the pre-light draw ritual. The cold draw delivered notes of citrus, wood, and a slight tangy sweetness. I consider this a satisfactory pre-light draw. At this point, it was time to light up the LH Nick Panzon and see what the smoking experience would have in store.

As the burn of the Panzon entered the base of the cigar, the coffee notes emerged as the sole primary note. The citrus settled in the background with the earth, cedar, and pepper notes. By the second third, there was also a slight dark chocolate note that was also present. Once the Panzon passed the midway point, the pepper notes began to slowly increase.

The last third of the LH Nick Panzon saw the coffee notes remain primary. While there was more pepper in this part of the cigar than at any point before-hand, this cigar was not a spice-bomb by any means. There still were notes of chocolate, citrus, earth, and cedar rounding out the flavor profile. The resulting nub was cool in temperature and slightly soft to the touch.

The Panzon performed excellently when it came to the burn. It maintained a straight burn line and straight burn path without requiring an excessive amount of touch-ups. The resulting ash had a salt and pepper color. The ash itself was skewed toward the firmer side. The burn rate and burn temperature were both ideal. 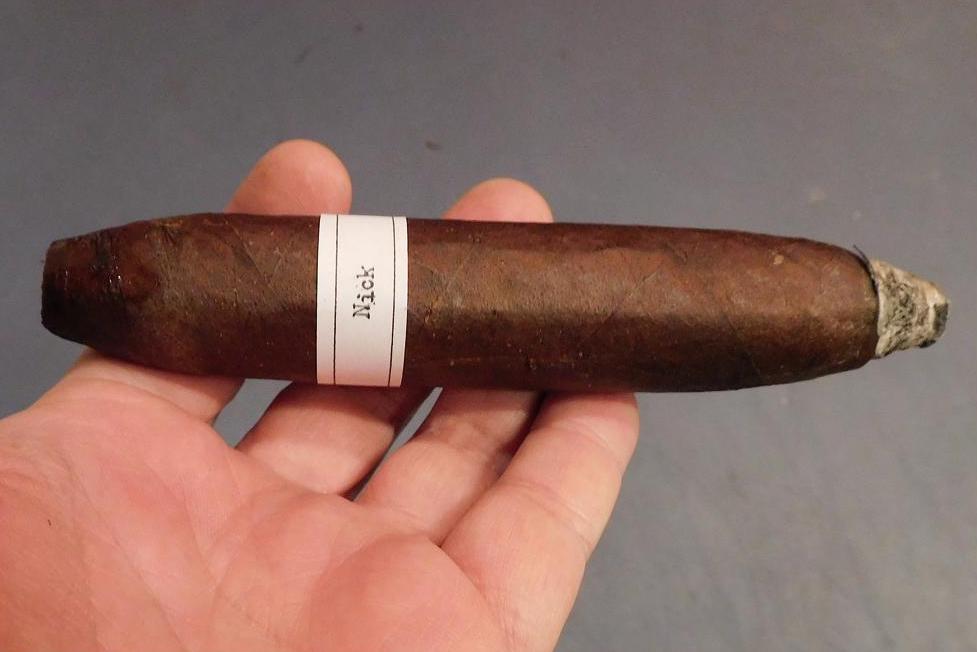 Burn of the LH Nick Panzon

The draw of the Nick Panzon also performed very well. The draw had a touch of resistance which is a personal preference. The tip of the figurado held up very well throughout the smoking experience. At the same time, the Panzon was a low maintenance cigar to derive flavor from.

The Nick Panzon started out as a medium strength, medium-bodied cigar. Along the way, there was a gradual increase in the intensity levels of both attributes. By the last third, the Nick Panzon was in medium to full territory for strength and body. Both the strength and body balanced each other nicely with neither attribute overpowering the other.

The Panzon answered two questions for me. The first was how would Nick Syris do in creating a figurado and the second was how good Nick would do creating a large ring gauge cigar. Syris gets high grades for doing both. I personally enjoy a Gordo cigar. What is very nice about the Panzon is you can smoke a 64 ring gauge cigar, but the fact this is a tapered figurado will almost make you forget you are smoking a 60+ ring cigar. The Panzon brings great flavor and excellent construction to the table. It’s a cigar I could recommend to almost any cigar enthusiast open to smoking a big ring gauge cigar. With 90 points, the Panzon reaches the threshold for the Cigar Coop Standard of Excellence. It’s a cigar I would smoke again – and would buy multiples to keep in my humidor.