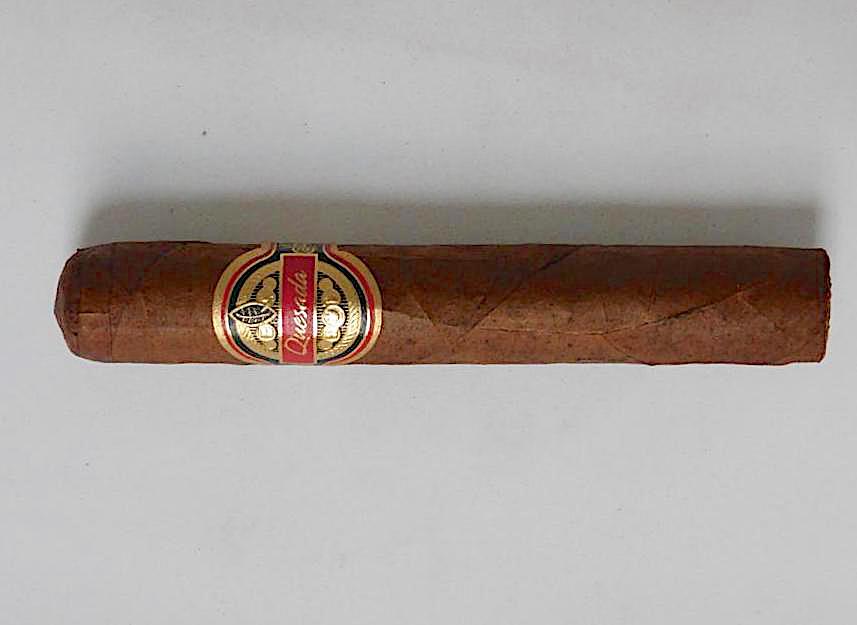 For now, let’s turn our attention back to the Quesada 1974 Robusto offering and see what this cigar brings to the table. 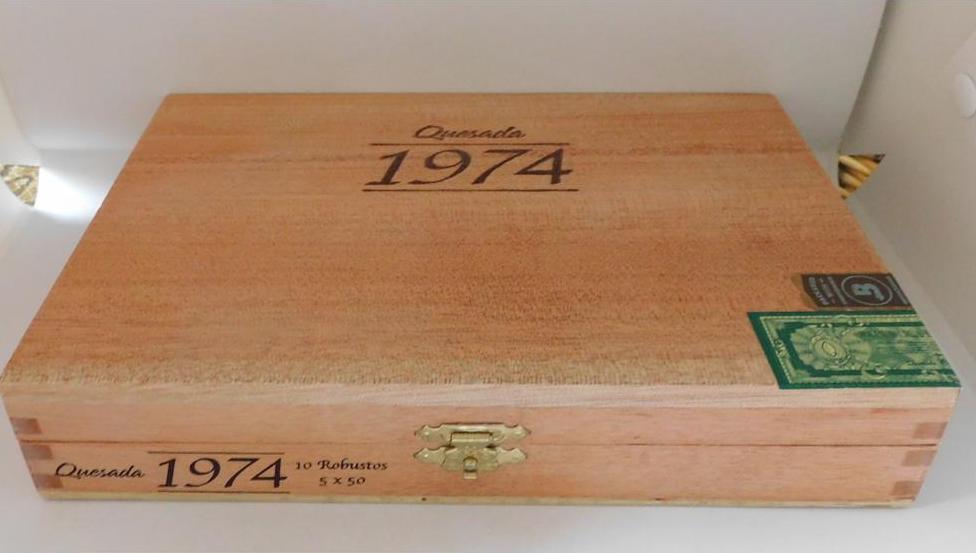 The Ecuadorian wrapper of the Quesada 1974 Robusto had a cinnamon color to it. There wasn’t much oil on the wrapper, but upon closer examination, there was a slight amount of mottling on the surface of the wrapper. There were some visible veins and some visible wrapper seams. 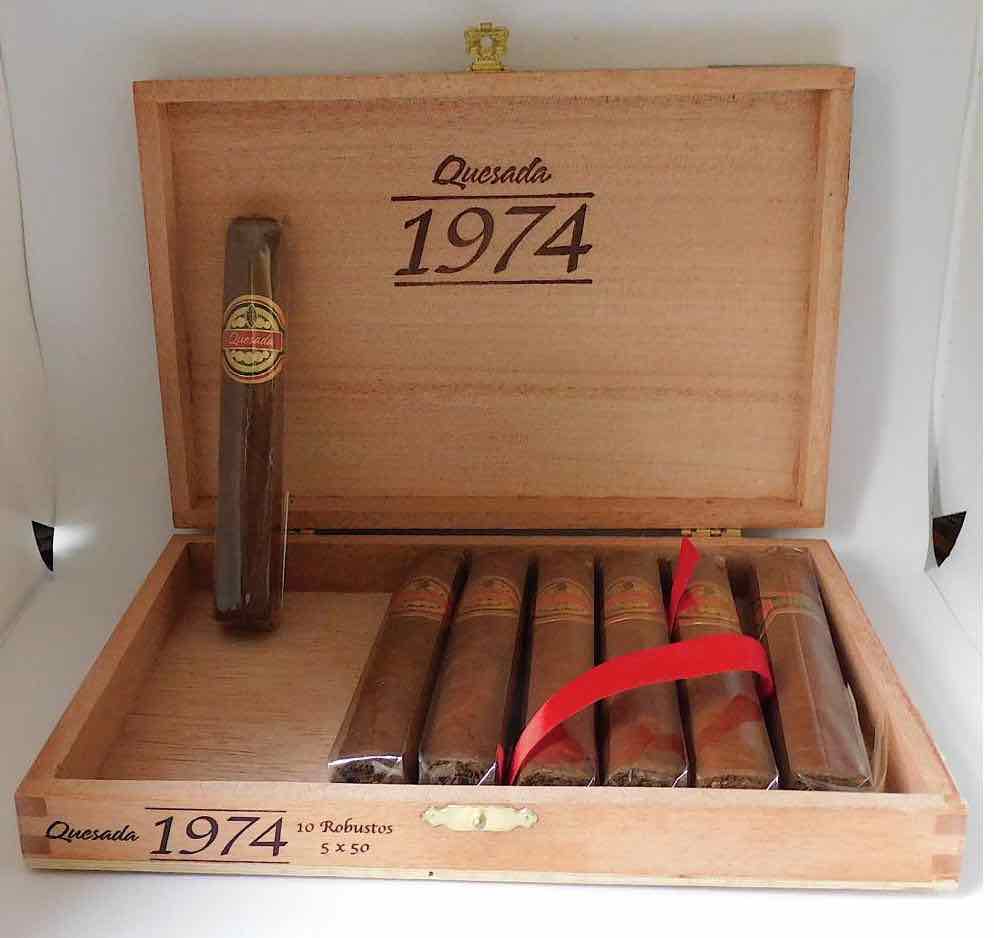 The band of the Quesada 1974 Robusto had a gold, red, and black color scheme to it. On the circular field is a series of gold medallion designs. At the top of the field is a black and gold Quesada “Q” logo. Across the center of the band is a red nameplate with the text “Quesada” in gold cursive font. There is a gold nameplate on both the left and right sides of the band. The left nameplate has the text “HECHO A MANO” in black font while the right nameplate says “HAND MADE” in black font. Most of the left and right sides of the band have gold adornments on a black background. The band as w whole is adorned with gold, red, and black trim.

A straight cut was used to remove the cap of the Quesada 1974 Robusto. After successfully detaching the cap of the cigar, it was on to the pre-light draw. The dry draw delivered a mix of wood, natural tobacco, and orange rind. While the flavor profile of the dry draw might seem simple, this was still quite satisfactory. At this point, it was time to toast up the foot of the Quesada 1974 Robusto and see what the smoking experience would have in store.

The start of the Quesada 1974 Robusto delivered a mix of natural tobacco, wood, white pepper, and dried citrus fruit. Early on the natural tobacco notes became primary. The wood, pepper, and fruit notes settled into the background. The dried fruit notes were the most prominent of the secondary notes. There was a nice underlying creaminess during the first third of this cigar. Meanwhile, the retro-hale delivered an extra layer of white pepper.

During the second third of the Quesada 1974 Robusto, the natural tobacco notes became much richer in terms of the flavor delivered. In addition, the dried fruit remained the most prominent of secondary notes. There still were notes of wood and pepper present. Surprisingly the cigar maintained its creaminess throughout the second third.

By the final third, the natural tobacco remained grounded in the forefront. There was a slight increase in the pepper where it was now more prominent than the dried fruit. There still were notes of wood that were present. While the cigar did lose some of its creaminess, there still was creaminess right until the end of the cigar. The cigar closed out with a nub that was cool in temperature and slightly soft to the touch.

The burn of the Quesada 1974 Robusto was good. There was a straight burn path and straight burn line without much in the way of touch-ups. With each of the samples, more in the way of touch-ups were required just past the midway point. The resulting ash was on the firm side. The ash had a silver-gray color to it. As for the burn rate and burn temperature, both were ideal. 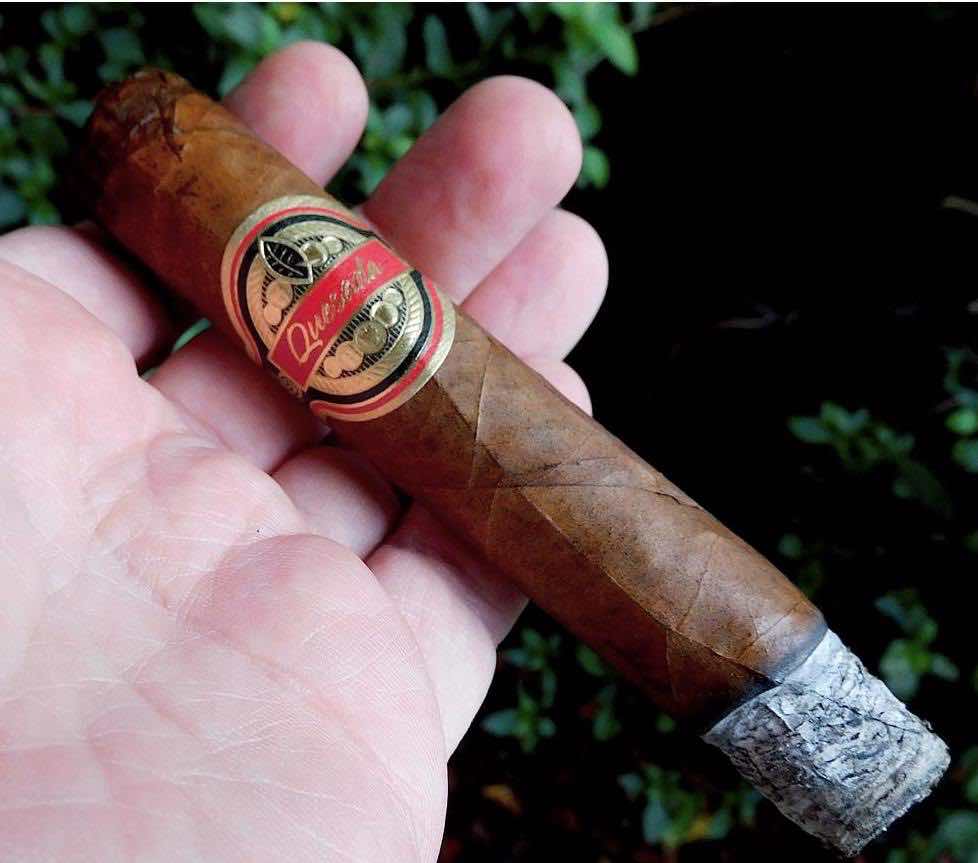 Burn of the Quesada 1974 Robusto

The draw to the Quesada 1974 Robusto had a touch of resistance to it – which is something I consider ideal. This still was a low-maintenance cigar to derive flavor from. At the same time, this is a cigar that had a nice amount of smoke production to it.

One thing I found interesting is that I found with the Quesada 1974 Robusto is that this is a cigar that could appeal to both the contemporary cigar enthusiast as well as traditional cigar enthusiast. If you were to ask me why, the contemporary cigar enthusiast will enjoy the sweetness and spice while the traditional enthusiast will appreciate the rich tobacco notes. I also found that not only did this cigar deliver good flavor, but it also delivers very balanced flavors from start to finish. Finally, the Quesada 1974 is a cigar that each time I smoke it, I seem to be able to find another positive to talk about with this cigar.

The Quesada 1974 is a cigar I could recommend to any cigar enthusiast any time of the day. As for myself, this is a cigar that I would smoke again and buy multiples for my humidor. At 90 points, this cigar earns a Cigar Coop Standard of Excellence designation.

Back in May, the Quesada 1974 was featured in a “Quesada Corner” video I recorded.