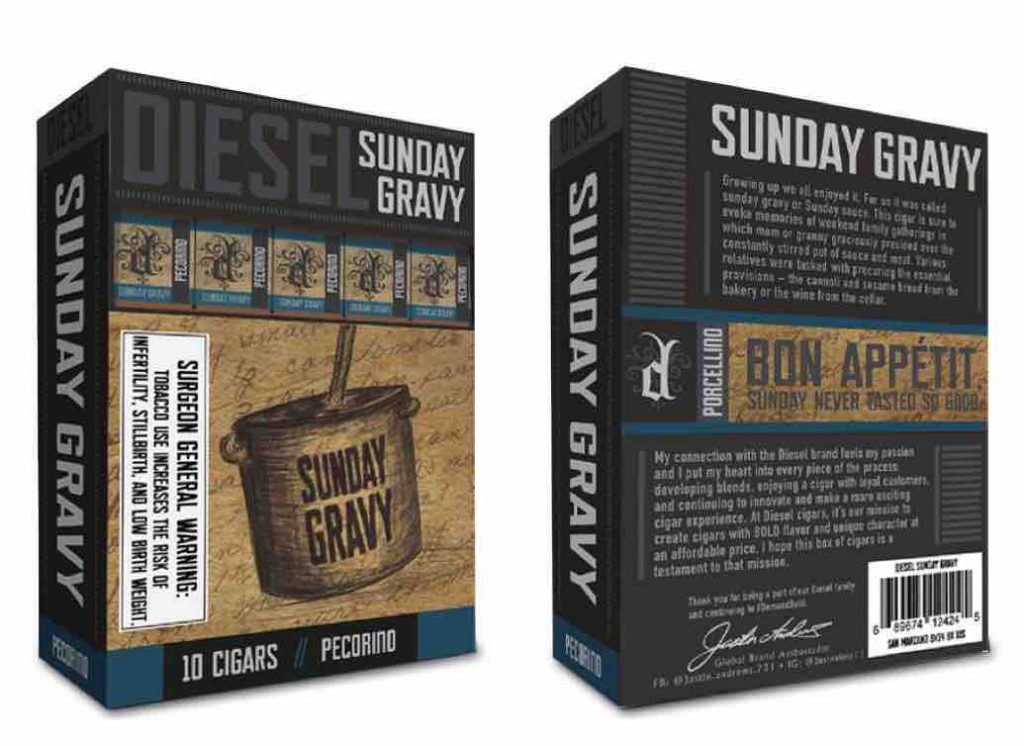 Sunday Gravy is a full-time line under Diesel and will feature seasonally-released, Nicaraguan-forward smokes developed by AJ Fernandez and Justin Andrews. Plans are for blends to be released quarterly and sold until their limited supply is depleted. Each of the cigars in the series are planned to be offered at a price less than $5.00 per cigar.

The name Pecorino comes from the Italian cheese often substituted for a more expensive variety. Here again, the culinary world and the cigar category collide, as Sunday Gravy Pecorino offers a satisfying smoking experience at a surprisingly affordable price.

Developed by AJ Fernandez and Justin Andrews and handcrafted at Tabacalera AJ Fernandez in Estelí, Nicaragua, Diesel Sunday Gravy Pecorino features a Mexican San Andres wrapper over a Cameroon binder and bold Nicaraguan Esteli Habano filler. The cigar comes in one size – a 6 x 56. Pricing is set at $4.99 per cigar.

Justin Andrews said, “AJ and I had a lot of fun blending Diesel Sunday Gravy Pecorino. And as often happens over Sunday sauce, we brought our opinions to the table. ‘Pecorino’ represents what he and I both believe is the best of our palates: AJ’s nod to a bold smoke is there on the Nicaraguan ligero filler and my style is represented through the complexity and balance of the Mexican San Andres wrapper. This is the perfect cigar to enjoy, share or gift this holiday season and the size makes Pecorino the perfect smoke for any occasion.”

The third Sunday Gravy blend is scheduled to be released in January 2022.

At a glance, here is a look at the Diesel Sunday Gravy Pecorino: