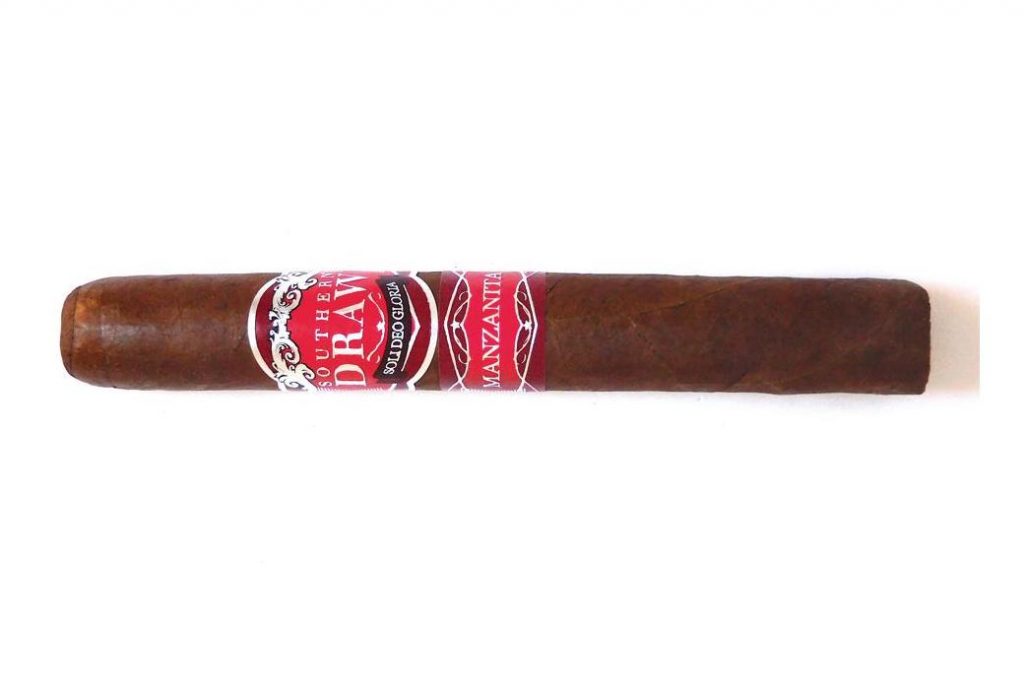 Late in 2020, Southern Draw Cigars launched a new regular production line known as Manzanita. The name Manzanita means “little apple.”  Southern Draw Cigars is known to name its cigars for flowers and plants. Not only do apples grow on trees, but Manzanita also refers shrubs and small trees that often have a reddish bark. The name was derived from the fact the Habano Hybrid wrapper used on the cigar has a reddish hue to it. In addition, Manzanita in its natural form has also been used as a tobacco substitute or additive to wild tobaccos for food and medicinal purposes by Native Americans. The Southern Draw Manzanita had a limited release in a Toro size toward the end of 2020, and in 2021 a Robusto and Toro sizes were added. Today, we take a closer look at the Southern Draw Manzanita in the Toro size.

As Southern Draw has done with several releases, it is tying the release with a charity component. In this case, Southern Draw is supporting the First Nations Development Institute, an organization that endeavors to ensure the sustainable, economic, spiritual, and cultural well-being of their communities. Southern Draw has chosen for their contributions to go toward First Nations’ Nourishing Native Foods & Health program.

In addition, h\as Southern Draw has done in the past, the release is a tribute to a specific person. In this case, it pays tribute to Cortney L. Taylor, whom Southern Draw describes as a “close member of the family.” The color scheme of the boxes and bands embody the university and athletic programs he has been associated with.

One note before going into this assessment. The samples smoked in this assessment had about 9 1/2 months of age on them. With that out of the way, let’s break down the Southern Draw Manzanita Toro and see what this cigar brings to the table.

The Southern Draw Manzanita is being produced at longtime partner AJ Fernandez’s factory. The company is announcing the tobacco components but is not discussing the origins. Southern Draw stated the company has decided to keep the countries and farms of origin confidential so aficionados will not form notions prior to each person’s own actual smoking experience.

The Manzanita is offered in three sizes, each packaged in 10-count boxes.

The Habano Hybrid wrapper is best described as a dark caramel color with a reddish hue. There is some oil present on the surface of this wrapper. It’s a wrapper with a smooth surface. The wrapper’s darkish tint minimizes any visible wrapper seams. There also were some thin veins that were visible.

The secondary band of the Desert Rose is unique to that cigar. It has a dark red \ background. Prominently displayed on the center of the band on a brighter colored red field is the text “MANZANITA” in silver font. There are also silver adornments on the secondary band as well.

Prior to lighting up the Southern Draw Manzanita Toro, a straight cut was used to remove the cap. Once the cap was removed, it was time to commence the pre-light draw ritual. The dry draw delivered a mix of cedar, citrus, and earth. Overall this was a simple, but satisfying pre-light draw. At this point, it was time to toast up the footer of the Manzanita Toro and move on to the smoking phase.

By the final third, the combination of natural tobacco and earth remained primary. The natural tobacco notes were now firmly on the bitter side. The citrus notes in the background remained astringent. There was a slight increase in the pepper as well. This is the way the Southern Draw Manzanita finished up. The resulting nub was soft to the touch and cool in temperature.

The burn of the Southern Draw Manzanita Toro maintained a straight burn line. During the first half, this was a more low-maintenance burn. The second half required more frequent touch-ups. The resulting ash had a mostly light gray color. This was a relatively firm ash. As for the burn rate and burn temperature both were ideal. 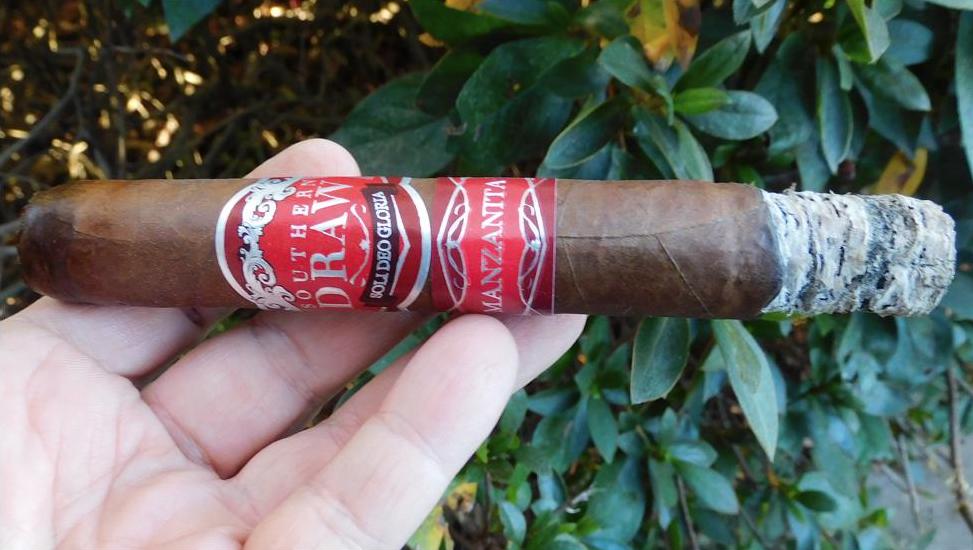 The draw of the Southern Draw Manzanita Toro started out with that touch of resistance that I enjoy. However, on each of the samples, the draw seemed to open up in the first third. The draw didn’t get overly loose. While it’s not a bad thing the draw opened up, the draw was much better in the first third.

The Southern Draw Manzanita Toro started out with a very nice sweetness from both the natural tobacco and citrus notes that was quite enjoyable. However, this cigar turned to another “tale of two cigars” in my book. The natural tobacco sweetness turned bitter in the second half, and the citrus got quite astringent.  This cigar also wasn’t an overly complex cigar in my book. By the time the cigar was in the second half, this was the most disappointing of any Southern Draw cigar I’ve had to date. Priced at $15.00, it’s one of the more expensive Southern Draw Cigars I have had. Given the price point, I really expected more of a total experience. This is simply a Southern Draw Cigar I could not recommend. That being said, I’m still curious to see if the Robusto or Gordo sizes do better.