Agile Cigar Reviews are cigar assessments where we use a lightweight, shorter format. These will never take the place of our comprehensive reviews. They are only used on blends we have previously assessed. This might be a blend we are re-scoring or giving a score for the first time. It might be a blend we are looking at in a different size. Today we look at the Oliva Serie V 135th Anniversary Edición Limitada. This is a cigar blend previously assessed in January 2012 in the No. 4 size. 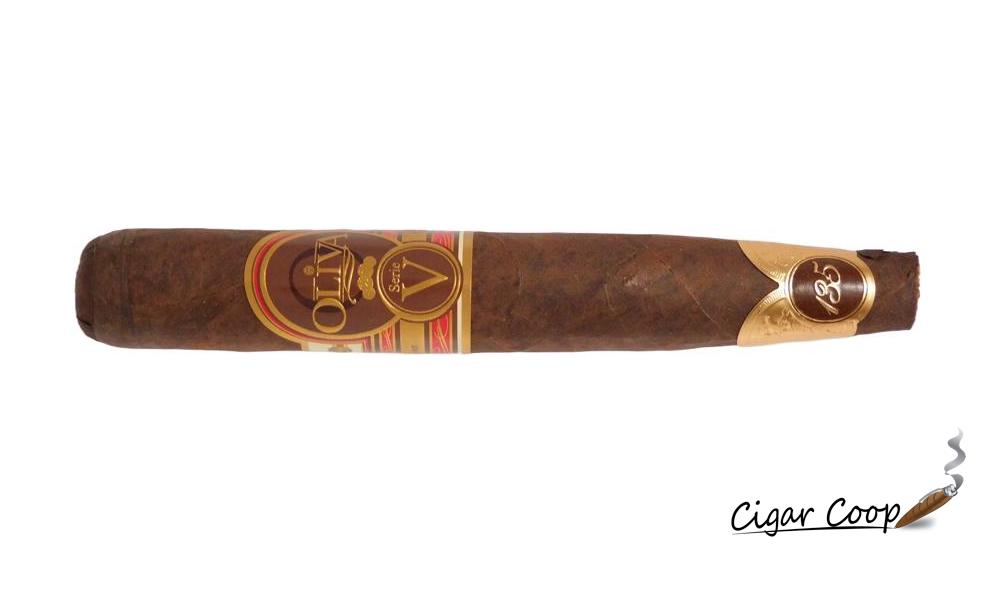 Blend-wise, the Oliva Serie V 135th Anniversary Edición Limitada features the same tobaccos as found in the rest of the Serie V line. This includes an Ecuadorian Sun Grown wrapper over all-Nicaraguan tobaccos. The figurado shape measures 5 1/4 x 54. The cigars are presented in 12-count boxes. Production is handled at Oliva’s TABOLISA factory in Estelí, Nicaragua.

The Oliva Serie V 135th Anniversary opened up with an assortment of flavor notes including cocoa, earth, cedar, floral, nut, and white pepper. As the cigar moved through the first third, the cedar and earth took a slight edge. While these flavors wouldn’t normally excite me the cocoa, floral, nut, and pepper notes rounded out the profile nicely. The retro-hale produced additional layers of pepper and earth. During the second third, the earth took a slight edge over the cedar as the primary note. At the same time, there was a slight increase in pepper. The final third didn’t see much change as the earth notes continued to be rounded out by the other secondary notes that were present since the beginning.

The strength and body of the Oliva Serie V 135th Anniversary were medium to full from start to finish. There wasn’t much variance in the intensity levels of the strength and body. Both attributes balanced each other nicely with neither attribute overshadowing the other. The burn of the Oliva Serie V 135th Anniversary performed well requiring few touch-ups. The draw also performed quite well delivering a touch of resistance – which is something that is my sweet spot.

The Oliva Serie V 135th Anniversary might not be a cigar that undergoes radical flavor transformations, but it is one that has plenty of flavor nuances as the smoke is rolling around your tongue. While I wouldn’t put the 135th Anniversary as my favorite Serie V vitola, this was still a fun and enjoyable smoke. This is a cigar I would steer toward a more experienced cigar enthusiast, but I wouldn’t discourage a novice from reaching for one. As for myself, this is a cigar I would buy and smoke again. Coming in at 90 points, the Oliva Serie V 135th Anniversary earns our Cigar Coop Standard of Excellence designation.