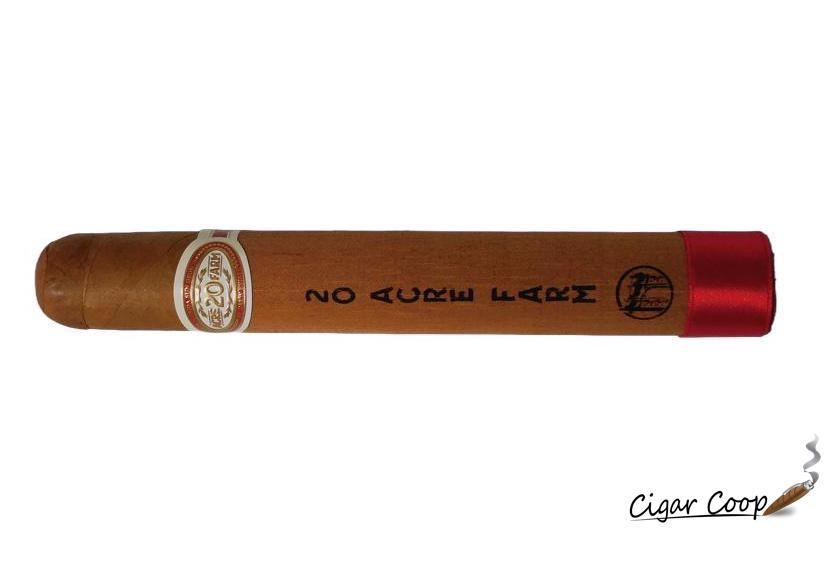 Late in 2021, Drew Estate unveiled an all-new line in its portfolio called 20 Acre Farm. The 20 Acre Farm gets its name from the 20-acre plot of land in Clermont, Florida where Jeff Borysiewicz grows Florida Sun Grown (FSG) tobacco. Borysiewicz is best known as the founder of Corona Cigar Company. In 2013 he bought that plot of land intending to revive tobacco growing in the State of Florida which had ended in 1977. The 20 Acre Farm incorporates the FSG tobacco into the blend highlighted by a Connecticut wrapper. It also introduces a more premium Connecticut Shade offering into the Drew Estate portfolio. Today we take a closer look at the 20 Acre Farm by Drew Estate in the Toro size.

Last fall, the 20 Acre Farm was originally released as a “mystery cigar” as part of a special kit under Drew Estate’s Freestyle Live program. The kit contained the unbanded cigars and some accessories. The idea was consumers could enjoy the cigars while trying to guess what the cigar could be. On November 11, during the company’s Freestyle Live broadcast, it was revealed that the mystery cigars were a new brand called 20 Acre Farm.

The 20 Acre Farm would become the second national release by Drew Estate to contain the FSG tobacco. The first was the original FSG-branded cigar. Concurrently with the unveiling of 20 Acre Farm, it was announced that the original FSG cigar would be returning as a single store exclusive to Corona Cigar Company – which is how it originally started.

For now, let’s turn our attention to the 20 Acre Farm Toro and see what this cigar brings to the table.

In addition to the Ecuadorian Connecticut wrapper, the 20 Acre Farm utilizes a Sun Grown Habano wrapper. The FSG tobacco is incorporated into the filler along with Nicaraguan tobaccos from the Jalapa and Estelí regions. Production is handled at Drew Estate’s La Gran Fabrica in Nicaragua.

The 20 Acre Farm is offered in three sizes. Each is presented in 20-count boxes

In addition there is a 7 x 54 Belicoso size that is exclusive to Corona Cigar Company.

The 20 Acre Farm Toro had a light brown colored Ecuadorian Connecticut Shade wrapper. There wasn’t much in the way of oil on it, but it did have a silky complexion to it. There were a few visible veins and any wrapper seams were minimally visible. 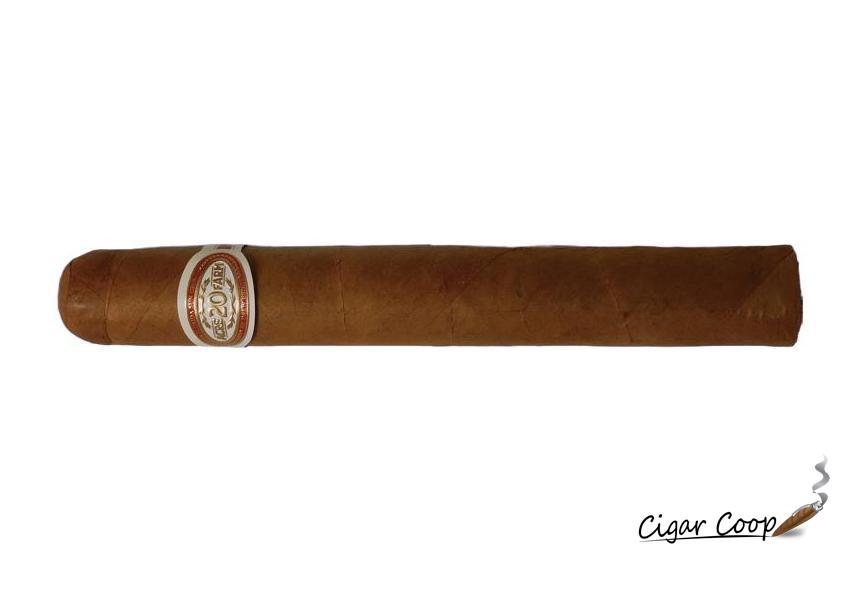 The band on the 20 Acre Farm had a white, red, and gold color scheme. On the center of the band it had an oval field with a red oval ring near the outer perimeter. Inside the ring is the text ACRE – 20 – FARM in gold font with gold adornments above and below it. On the upper part of the red perimeter ring is the text “FLORIDA SUN GROWN” and the lower part has the text “BY DREW ESTATE” – both in gold font. There are some gold design elements on the left and right side of the perimeter ring. There is a wavy red stripe with gold trim on both the left and light of the band. On the right stripe is the text “CONNECTICUT SHADE” in gold font. On the far right of the band is a small gold Drew Estate bridge logo.

After removing the cedar sleeve of the 20 Acre Farm Toro (which on some of the samples proved to be somewhat difficult to do and at times made it difficult to keep the band on the cigar), a straight cut was used to remove the cap of the cigar. The dry draw was pretty non-eventful, delivering notes of classic wood, cream, and cedar. This wasn’t the most exciting pre-light draw, but since the pre-light draw is not scored there was no loss of points here. Once the pre-light draw completed, it was time to toast up the 20 Acre Farm Toro and see what the smoking experience would have in store.

The 20 Acre Farm Toro opened with notes of cedar, cream, bing cherry, and chocolate. There was a creamy start to the cigar experience, but as the cigar progressed through the first third the bing cherry and cedar notes became primary. The chocolate and cream notes receded into the distant background. The retro-hale delivered notes of wood.

As the 20 Acre Farm Toro moved into the second third, both earth and black pepper notes emerged on the tongue. The black pepper notes joined the wood on the retro-hale. The earth notes moved into the forefront displacing the bing cherry notes. The bing cherry diminished considerably during this third, while the cream and chocolate notes seemed to dissipate completely.

While there was some jaggedness on the burn line, the 20 Acre Farm Toro maintained a relatively straight burn path and was not prone to meandering. Other than cosmetic touch-ups, there weren’t many touch-ups that were needed. The resulting ash was silver gray. This was an ash skewed toward the firmer side. As for the burn rate and burn temperature, both were ideal. 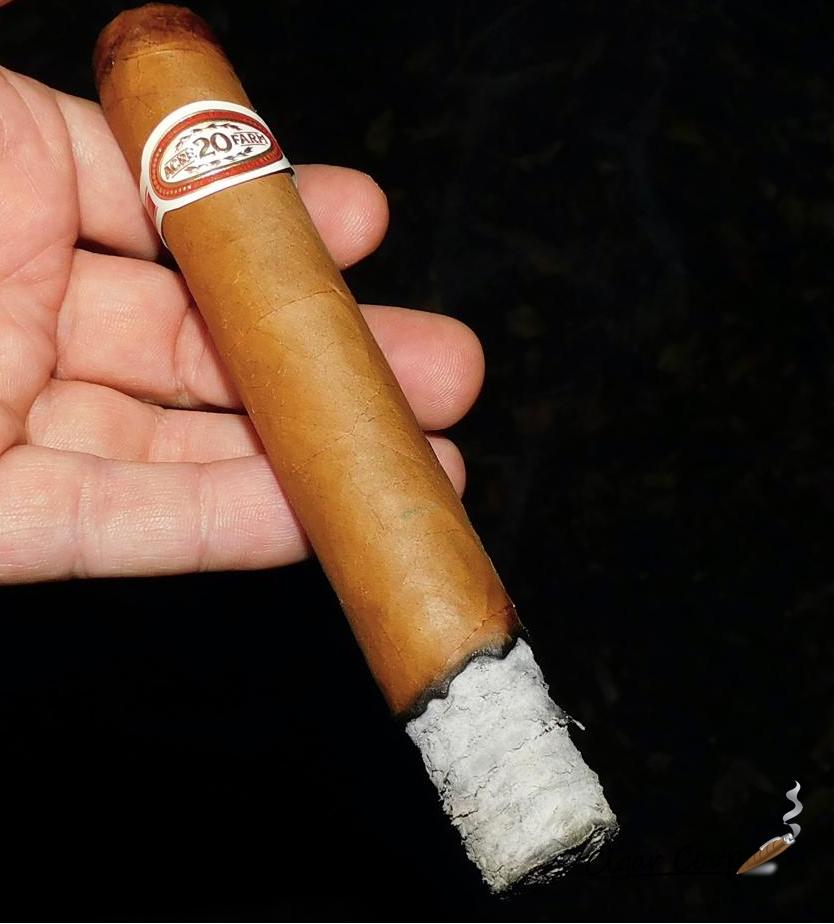 Burn of the 20 Acre Farm Toro by Drew Estate

The draw had a slight touch of resistance. This was enough to make this draw quite satisfying in my book. At the same time, this was a low maintenance cigar to derive flavor from.

With FSG tobacco in the blend, I was expecting the 20 Acre Farm Toro to deliver some kick, but this was not the case. This cigar started mild to medium in strength and body before progressing to medium for both attributes in the second half. In terms of strength versus body, the body maintained a slight edge throughout the smoking experience.

Given this was a Connecticut Shade wrapper containing Florida Sun Grown tobacco, I was pretty excited to smoke the 20 Acre Farm. However when it came to the Toro size, this was a tale of two cigars. This cigar started out fantastic in the first half – particularly the first third. As the sweetness diminished and the cedar became more dominant, I found this cigar to lose its balance on the flavor profile – and it became less enjoyable. I know the cedar sleeve has a nice aesthetic look on the packaging, but I really wonder if this cigar would have been better without the sleeve on it. This is a $13+ dollar cigar. While I saw some potential, I needed it to deliver from start to finish. In the end, when it comes to the 20 Acre Farm Toro, I’d recommend trying a sample first.

Ben Lee of The Smoking Syndicate smoked the Robusto size of the 20 Acre Farm and gave it a 91. Note you will need to click on Watch on YouTube to watch this video.