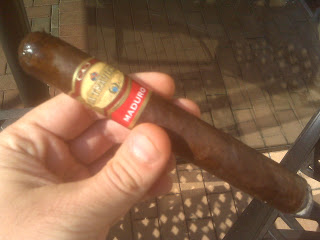 In 2009, I did my first Cigar of the Year list.   The way I worked this list is I selected 20 cigars that I felt warranted Cigar of the Year consideration.  One by one, I opted to countdown the list by figuring out which cigar I would be most likely to part with.   When it came down to the final two, it was between the Drew Estate Liga Privada T52 and the CAO La Traviata.   It was a tough decision, but I eventually gave the T52 the nod.  This is no knock of the La Traviata – which was one of the best sticks of 2009.   This year, CAO comes back with a Maduro version of the 2009 release.  I am pleased to report that once again, I expect a CAO stick to be contending for the #1 spot.  In fact, I do feel the La Traviata Maduro exceeds the original in terms of the overall experience.

The La Traviata line was launched in 2009 by CAO.  This was a resurrection of an old Cuban brand name with the “La Traviata” name at Tabacalera Cubana. The idea of bringing back the brand was to abide “closely to [La Traviata’s] original Cuban roots in presentation and taste”.   The original blend was a beautiful combination of a Ecuadorian Habano wrapper, a Cameroon binder, and Pueblo Nuevo Nicaraguan Filler combines with Dominican Filler.   The key point is that CAO priced this under $6.00 – truly in the “value price” range, yet this cigar smoked with the best of the premium sticks!

The change with the Maduro version of this stick – put on a Connecticut Broadleaf Maduro and keep the binder and filler.  Here is the breakdown of the blend:

For this review, I tried the “Radiante” version of the La Traviata Maduro.   This stick is a beauty – the Connecticut Broadleaf wrapper is absolutely stunning.

Once I lit this, I was surprised by the initial flavors.  I got a salty start to the stick – something I usually find with the all Nicaraguan blends.   Shortly afterwords, I hit an interesting combination of coffee, caramel, tangy flavors, and baking spices (nutmeg was prominent).  The baking spices get a lot stronger and are the dominant flavor.   As you get toward the halfway point, the caramel tones disappear.   It is also around the halfway point where I see the coffee tones start to transition to a rich deep chocolate taste.   It is this deep chocolate taste that remains for the rest of the smoke along with the baking tones.  I commented to Jon Huber at the CAO Event at Brookleynn Cigars how great these chocolate tones were.

I’ve had this stick on several occasions.   There were some smokes where the finish was cool and firm and there were others where it was soft and warm.  In all occasion, this was a beautiful finish – sweet and not harsh.   The burn and draw were flawless.

2010 is shaping up to be even more competitive with the top sticks of the year.  I’m not sure where the chips will lie for my list, but since this stick exceeds the Habano version, I wouldn’t be surprised if this is at the top of the list.