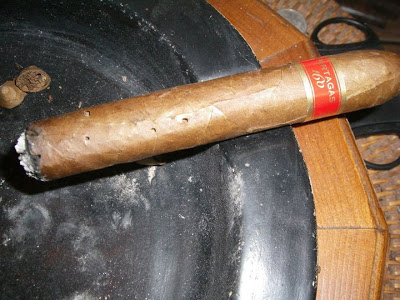 As a Cigar Enthusiast, one thing that we have to be most aware of is the potential for Cigar Beetles to infest into Cigars.   The picture above really tells the story here (thanks to my good friend Josh for sharing this example).   A cigar that has been infested with Cigar Beetles will have these little bullet holes in them.

Cigar Beetles are almost like termites.  These tiny bugs with usually are no more than 3 millimeters long don’t live long , but they can do a lot of damage.  They typically thrive in humidity and temperatures above 74 degrees. They also can lay eggs too small to detect with the human eye – about 100 per birth cycle.   They hatch within six to ten days giving birth to larvae.  It s the larvae that eat the tobacco and grow.  The lifecycle from egg to larva to adulthood is about 10 to 12 weeks total.

There are two main factors that often lead to this condition:
1) Temperatures above 74 degrees and high humidity – thus very important to maintain proper humidity and temperature in your humidor.   Yes too much humidity is bad to begin with and here is another reason not to over-humidify.

2) Certain Cigars from countries that normally don’t ship to the United States or are legally prohibited from being imported into the United States.    This day and age, most manufacturers take precautions against tobacco beetles prior to shipping product from their factory by implementing a freezing process.

If you happen to find a cigar that has beetle damage, you must address each cigar that is in the humidor.  Also if you happen to get one of those cigars that do not follow the precautions on import/export controls, you should take these steps as preventive maintenance.  (Special thanks to Tom from Outland Cigars and the folks from Cigar International for this one)

You will find that you should be able to rescue most of your cigars.   A cigar with the damage above might not be salvageable as it most likely will produce draw problems.  The preventative steps should also not damage your cigar.