The details have said that there was a 1999 bale of rare tobacco found.   The plan that only about 2000 boxes will be blended.  It will only be made available to select dealers of Swag Cigars.   A single vitola will be blended – and as of now, they are thinking of a Toro.   The plan will try to release in the next three months.  Of course, this is subject to change.

Swag Cigars was a new line launched by Oliveros last year.    For 2010, I ranked the Swag as my #19 Cigar for 2010, so I’m expecting great things from this blend!    Stay tuned to Cigar Coop for more details. 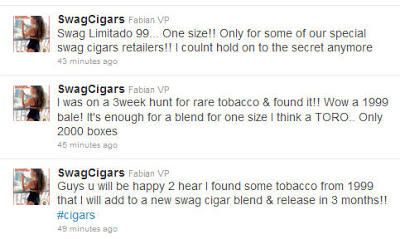