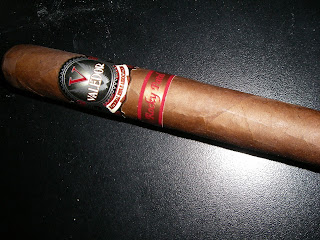 Rocky Patel’s Valedor was a cigar that was introduced last year.    Last year, Rocky’s big release was his 15th Anniversary – an excellent cigar that ended up placing in at #23 in my 2010 Cigar of the Year list.   While the 15th Anniversary got a lot of fanfare, this cigar did not get as much.   This was a cigar that Rocky blended for the National Rifle Association (NRA).   However, this is a cigar that should not be overlooked as it is a very solid release by Rocky and his team.

If you follow Rocky Patel, you know he is a big advocate of Cigar Rights of America (CRA).   When I recently saw Rocky at an event in Greenville, South Carolina, he took time to mention the good work being done by the CRA.   I see Rocky as a “less big government” guy and therefore, I can understand aligning himself with the NRA here.   Much like those who want to bear arms are under attack, those who want to enjoy a good stogie are under attack – so I see this as a very good match.

Let’s start by taking a closer look at the compositon of this cigar:

The Valedor is available in three vitolas:

For this cigar experience, I opted to go with the Toro size.    For his smoke, I punched a hole in the cap, toasted the foot and away I went.

The initial notes I got from this cigar were not spicy at all.  I was a little surprised – considering the Nicaraguan filler and binder.   A smoothness to this smoke is established very early on – and it remains for the duration of the smoke.   As the smoke progresses, I pick up almost a cedar-like sweetness and some nut flavors.  At times, the nut flavors do remind me of walnuts.  I’ve seen some reviewers mention chocolate notes, but I did not detect any.   The flavor notes remain consistent, but then in the last third, it begins to take much more of a spicy turn.  Not a “Don Pepin pepper blast”, but more of a cedary spice.  While the spice won’t be overpowering, it is just enough to provide a nice kick at the end.   Overall, not the most complex cigar, but very good flavor notes overall.

From a strength category, I actually felt the beginning of this cigar was in the mild to medium category, although it closes with medium strength.  This cigar was advertised as medium to full bodied, but from my point of view while the flavor notes are good – they are definitely in the medium bodied range.

The burn was good.   I did have to do a couple of touch-ups.  The cigar did not burn hot and had a nice cool and firm finish.  At times, I did have to work the draw a bit, but it did not plug.

Overall, the Valedor was a nice find.  I’m surprised it did not get more fanfare.  It is a cigar I would not hesitate to give to a novice cigar enthusiast.  The full-bodied enthusiast might prefer this as a morning smoke.   Still, this is a cigar I would reach for again.