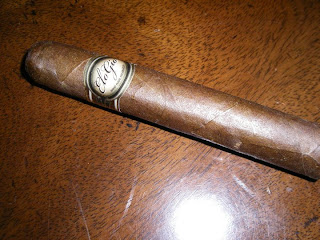 Back this past October, I did a Pre-Review on the Elogio LSV.   Now that I have been able to repeat a sample of this, I feel I am in better shape to make a more qualified assessment.   This is an Indie cigar that you might not see at your local retailer, but it is a cigar you might want to seek out.

A little background on how I found out about Elogio Cigars. Prior to go to IPCPR 2010, our team had a series of prep meetings on how we were going to attack the trade show.  One task was to really look for the Indie Cigars that would stand out and have something special.  As part of his prep work, my friend Stace had done some research on Elogio Cigars and felt that this stick really fit the profile for the type of Indie stick that would be unique and bring something special to the table.   At IPCPR, Stace visited the Elogio Cigars’ booth and sampled some of the cigars.   His words to me for the past two months – “you need to try that Elogio LSV sample you got”.   Therefore, I smoked the sample and in the Pre-Review, I felt this had a lot of potential – but needed another smoke. Since then Stace has been heavily promoting this cigar as he truly believes it.   We recently sampled the Elogio LSV at our monthly taster’s roundtable.  Kudos to Stace to prepping everyone with background information on Elogio.

As mentioned, I did a Pre-Review of the Elogio, and there definitely was potential.  I’ll cover the basics of how the cigar smoked this time, and then provide some differences from the Pre-Review.   It turned out, I smoked the same vitola both times.

Let’s take a look at the composition of the blend.  The selling point of the Elogio Cigar is a special wrapper from Somoto, Nicaragua that makes up this all Nicaraguan puro.  The Somoto wrapper often does not get the respect like other Nicaraguan tobaccos.

The cigar is available in 5 sizes:

At the roundtable, I placed straight cut into the Somoto wrapper, toasted the foot and prepared for this smoking experience.    The initial flavor notes were an exotic pepper-like spice – almost like an Indian spice.  In fact, you can also feel the pepper through your nose.  There was also some tanginess to the flavor as well  About 10 percent down the smoke, I detected some wood notes.  By about 20 percent of the way down the smoke, the wood takes over as the dominant note.

About 1/3 of the point, I the exotic spices had diminished, but I was picking up more of a baker’s spice.  It wasn’t a strong spice, but I was able to detect it.   As the cigar moved toward the halfway point, the wood notes had transitioned more to a leather note (this one is for the boys at Outland).  The baker’s spice remained.   As the cigar progressed into the last third, I detected some notes of coffee and mocha.   It wasn’t a strong coffee, but it did remind me of the flavors of New York’s “Chock Full o Nuts” coffee.  Overall – wonderful complexity.   The cigar had a nice cool finish, although it was a bit soft.

For strength, this as a Medium to Full in strength.  As for body, I think this stick actually is full-bodied to start (with the initial exotic spices) and then settles into a Medium to Full for the remainder of the stick.  Burn and draw were excellent this time.

Overall, this is a solid cigar.   It is complex and something different.   This is very important when you have an Indie cigar as you want it to bring something unique to the table.   This is one I would definitely recommend checking out.