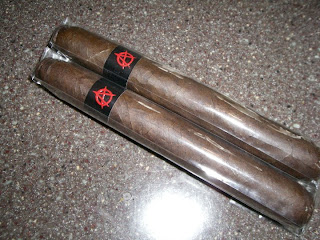 When it comes to limited run cigars, I’ve been a bit hesitant about putting them into a Cigar of the Year countdown.  My reasons are simply, should a hard to find cigar be considered for such an honor – or should it come down to how good the cigar is?  After smoking the Tatuaje Anarchy, I was blown away – and suddenly realized I need to reconsider my position.

The Tatuaje Anarchy is available from one retailer – the Smoke Inn in South Florida.  The story (as on the web-site) goes that owner Abe “Ming” Dababneh approached Pete Johnson in the spring of 2009 about a limited cigar concept.  As with many of the Tatuaje cigars, Don Pepin Garcia was brought into the blending process. They went through several iterations of the blend and selected a very limited Ecuadorian Habano leaf.  It is this wrapper that is described on the web-site as an “oily dark wrapper having almost a ‘fuzzy’ feeling on your lips”.  It is a work of art.

Let’s take a closer look at the blend:

The cigar itself is available in a single vitola and it is very unique.  It is a perfecto that is best described as 6 1/8 x 48-52 – meaning the perfecto tapers from 52 to 48.

I have to thank my buddy Rodger for this one.   He lives in South Florida and was kind enough to get me a couple from Smoke Inn.  I let this age for several weeks as I wanted them to be perfect.   It was a warm 70 degree night in Charlotte, North Carolina when I opted to straight cut the cap and begin my cigar experience.

The initial notes of this cigar had some complexity right off the bat.   It was a good mix of Pepin-like pepper, coffee, molasses, and some leather.   The start was one of the best I ever had.   As the cigar progresses, the coffee notes begin to take center stage.   They progress to roasted coffee and then to an espresso-like coffee note.   As the cigar approaches the 1/3 point, some notes of cream even emerge.

It was in the second third where this cigar really became something special.  The coffee notes remained but suddenly a nice sweetness emerged.   While the sweetness had a quality of a good Maduro cigar, I was detecting what I can only describe as cane sugar!  It wasn’t an infused-like taste, but the natural taste one would expect from cane sugar.  The sweetness does dissipate and the coffee/espresso notes return to center-stage.  Some pepper emerges toward the end giving it a great finish. I got a terrific nub on this cigar – cool and firm and not one bit of harshness.

The great finish to this cigar can be attributed to the great burn – no touch-ups needed whatsoever and it never burns hot. This cigar also had a great draw – low maintenance.   From a strength standpoint, I definitely have the first two thirds in the medium to full range, but the kick at the end definitely was more in the full range.  As for body, this is a classic example of a full-bodied cigar – deep, and rich notes.    From a complexity standpoint, I’m very willing to give this a “High”.  This is everything a complex cigar should be.

This cigar was released shortly after Thanksgiving, so it can qualify for my 2011 Cigar of the Year countdown.   I haven’t resolved the question yet if this will qualify.  I still would prefer Tatuaje would take a Viaje approach and make this limited run cigar available to a group of retailers, but we must respect that this is the business model that Pete Johnson has chosen – and it has been successful for him.  Given this is free enterprise, we must respect that someone does have the right to see their products as they so choose.   The good news is – good folks at Smoke Inn have made this available online, so it does provide a way for everyone to get the cigar.

This cigar is nothing short of a home run.  It is right up there with the La Sirena as a cigar that has blown me away in 2011.   While not a cigar for a new enthusiast, someone who likes a cigar that smokes like a meal is going to love this.