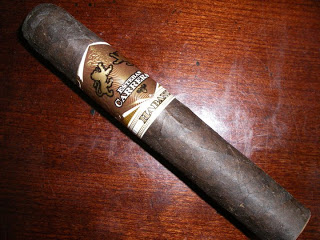 I discovered the Esteban Carreras line about two years ago while I was up in New Jersey.  I had sampled their 10 Anos (also a Top 10 cigar of mine for 2009) and I realized there was something special to what Cunningham and his company were doing.   It was not long after that I convinced my local retailer to give these guys a try – and that’s when I managed to sample the Esteban Carreras Habano Maduro.   After having this cigar, it reaffirmed all of the positive things I had been saying about this company.

So you might ask – what is so special about this cigar?   Let’s take a closer look.

The wrapper on this cigar is a Nicaraguan Habano Maduro.  It is also worth noting that this is available in a Natural Habano wrapper.  The cigar itself is a Nicaraguan puro.

The cigar itself is available in six vitolas in both the Natural Habano and Habano Maduro:

For this cigar experience, I opted to sample the Toro.  I probably will do an assessment of the Robusto separately. The Toro is my second favorite vitola behind the Robusto for this blend.  It’s just that I have a box of the Toros and have smoked more of these as of late.  The Toro size still does justice to providing an outstanding smoking experience.

For this cigar experience, I placed a straight cut into the cap.  If you look at the photo above, this cigar had developed a nice plume on it, so it was very ripe to be smoked.   On the pre-light draw I was treated to a combination of chocolate and light pepper.  Judging from the appearance of this cigar, the flavor profile did not surprise me, yet it still made for a good dry draw.   It was then on to toast the foot and enjoy this cigar.

Ultimately it is going to come to flavor and complexity that will determine if a cigar is in the stratosphere in terms of a great rating.  The Esteban Carreras Habano Maduro brings it all to the table.   The Habano Maduro starts out with chocolate and a hint of salt.   The salt notes get a little stronger early on and then transition into a classic black pepper spice.    I also detected some cherry sweetness early on.  When you have a trifecta of chocolate, sweetness, and spice – it makes for a very good start.

About 5 percent into the smoke, the chocolate transitions  into a cocoa powder taste.  The cherry notes also increase in depth.  The cocoa powder and cherry sweetness take some turns on which is the predominant note.  The spice remains a background flavor and the pepper can definitely be felt through the nose.

About 15 percent into the smoke, the cocoa note makes another transition – this time into more of a coffee-like taste.  The sweetness also takes on more of a taste of a generic syrup sweetness. This is the flavor profile that holds up until about the mid-way point of the smoke.

At the midway point, the spice begins to creep back into the picture – it takes on a combination of pepper and cedar notes.  Another interesting thing happens at this point – some tea notes become present.  Yes folks, you can have both coffee and tea flavors in a cigar and the Esteban Carreras Habano Maduro is proof.  This is the way the flavor profile holds through the end of the cigar.   The nub is cool and firm – and this makes for a wonderful finish.

With the Esteban Carreras Habano Maduro, I find these smoke better a little drier (65 to 68 percent humidity).   This was the conditions I had my cigar for this assessment under.   The burn and draw are excellent under these conditions.  The burn is never too hot and the cigar tends to burn slow making for an enjoyable experience.

There probably isn’t a lot more to say than I’ve said above except for one thing – the price point.   Depending on the vitola, these cigars are approximately in the $6.00- $8.00 range – a great price point.   Cunningham and Esteban Carreras are doing something right with his brand.  This went from a cigar I had to hunt high and low for to one that is appearing in more and more humidors.   I always keep a box of these around and don’t hesitate to recommend to others.

Disclaimer:  The cigar for this assessment was purchased from Outland Cigars in Charlotte, NC.